The fallout from the Greensill Capital and Archegos Capital Management scandals is continuing to reverberate across the financial services industry—likely resulting in a stricter risk management landscape.

The collapse of the London-based supply chain finance company Greensill, which filed for insolvency in early March after maintaining a valuation in the billions just a few years prior, marked one of the most shocking firm failures in more than a decade. In the same month, Archegos, the family office of investor Bill Huang, couldn’t meet multiple margin calls, prompting a widespread sell-off that closed the family office, lost Mr. Huang between $8 billion-$20 billion in less than two weeks, and cut millions from major global banks’ first-quarter earnings. Both incidents may make trade credit insurers more cautious, weaken confidence in the supply chain finance market, and force a reconsideration of reputational and asset management risks across capital markets, the global banking industry, and the broader financial services system.

“Recent financial difficulties at Greensill Capital highlight the nascent risks associated with supply chain financing. The sudden withdrawal of supply chain financing can create a material working capital squeeze and pressure a company's credit quality,” S&P Global Ratings said in a report on the hidden risks of supply chain financing yesterday. “Separately, partial asset sell-downs can have material consequences for creditors despite the accounting optics of such transactions. Accordingly, they offer no free lunch for corporates.”

Likewise, “torrid markets the past year have been fueled by liquidity, which in part has been provided by rising leverage. The collapse of Archegos Capital Management seems like a one-off, but it might not be. If liquidity starts to recede because prime brokers and other creditors tighten credit, then risk asset prices could fall as liquidity is withdrawn, assuming central banks do not intervene,” veteran bank analyst Jeff Davis, managing director of the business valuation firm Mercer Capital’s financial institutions group and registered representative of the investment bank StillPoint Capital, said in an S&P Global Market Intelligence commentary last month.

Swiss investment bank Credit Suisse and Japan’s largest broker and investment bank, Nomura Holdings, faced the most meaningful losses from their exposure to Archegos, with the former also burdened by its involvement in the Greensill collapse.

Credit Suisse’s latest earnings report showed the bank will suffer more than $5 billion in losses linked to the Archegos sell-off and will need to recover roughly half of the $10 billion in assets held in funds associated with Greensill, according to S&P Global Market Intelligence. Analysts believe the bank’s exposure and involvement in both crises signals a systemic issue in Credit Suisse's compliance and risk management. In response, Urs Rohner stepped down as Credit Suisse chairman after a decade in the position and CEO Thomas Gottstein said the bank will split its asset management business from its wealth management unit.

Nomura said it may not be rethinking its entire strategy after absorbing 245.7 billion yen ($2.24 billion) in losses sustained from the Archegos sell-off, but will aim to rebuild its wholesale business in the U.S.

Liberty Steel, the British industrial firm that was part of the GFG Alliance group, both of which were principally backed by Greensill, is suffering a financing squeeze and threats of labor strikes. On May 5, Liberty Steel announced it would "fix or sell underperforming units" in a restructuring and refinancing drive as it recovers from the supply chain finance firm’s collapse, according to S&P Global Platts. The British Parliament has initiated a probe into the case and how the country’s government supports the broader steel industry.

Market participants believe Greensill’s downfall could impact the supply chain finance market.  "When something like this happens, it deflates the enthusiasm that ordinarily should exist for this technique. I worry that it will scare off some investors who otherwise should be attracted to the space," Tony Brown, CEO of trade finance consultancy The Trade Advisory, told S&P Global Market Intelligence.

Today is Thursday, May 13, 2021 and here is today’s essential intelligence.

Economic Research: Why The U.K.'s Worse Recession Should Turn Into A Stronger Recovery 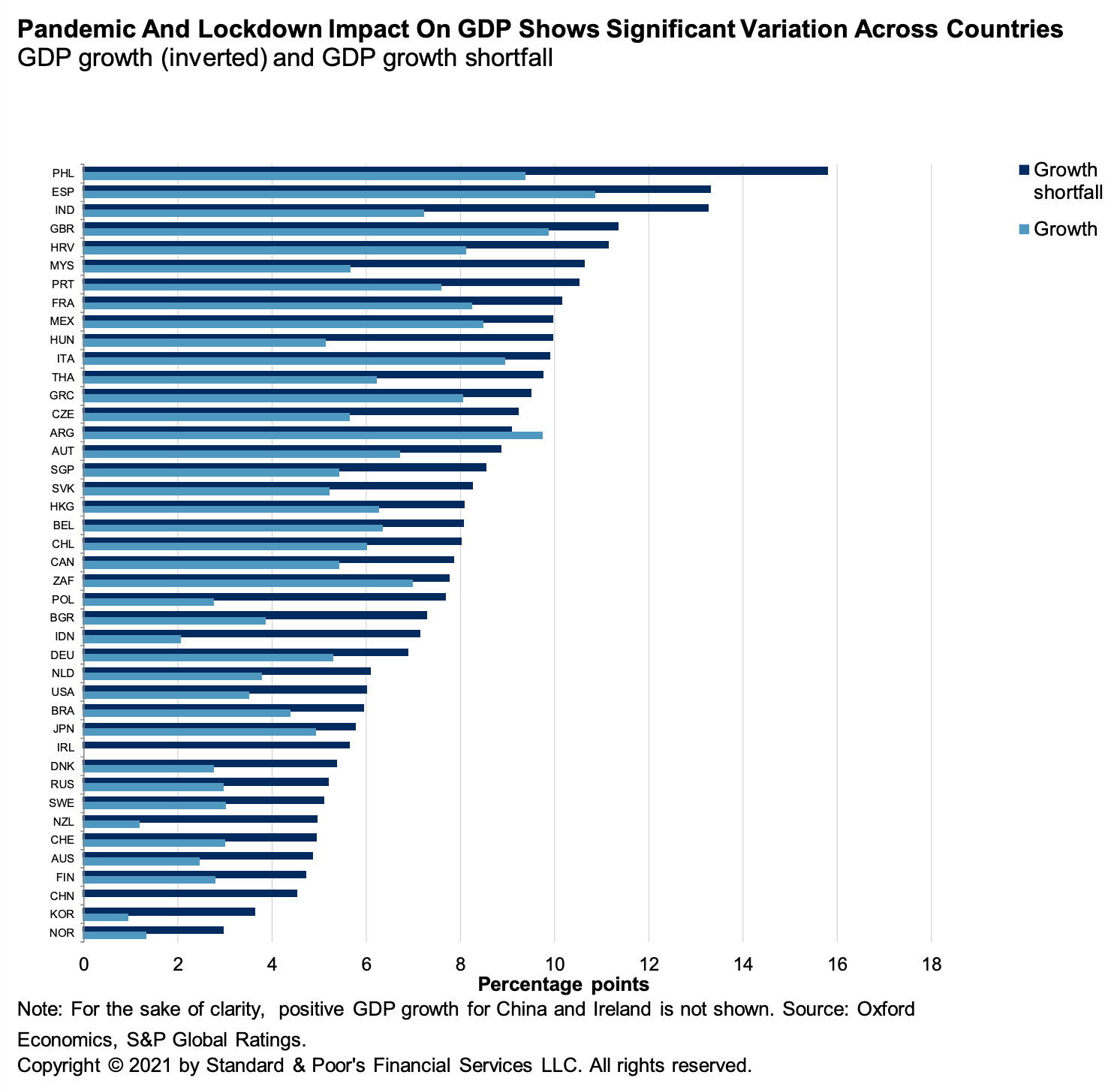 A more stringent lockdown to fight the COVID-19 pandemic only partially explains why the U.K. economy fared worse than almost all its peers in 2020, with GDP contracting by 9.8%. The good news is that most of the factors that led to a stronger contraction in 2020 will play in favor of higher U.K. growth rates during the recovery that is now under way.

U.S. business owners claim they have millions of job openings but few workers willing to fill them. And with the U.S. slowly emerging from the coronavirus pandemic, economists say this brewing labor crisis threatens the economic recovery as lost sales start to pile up. 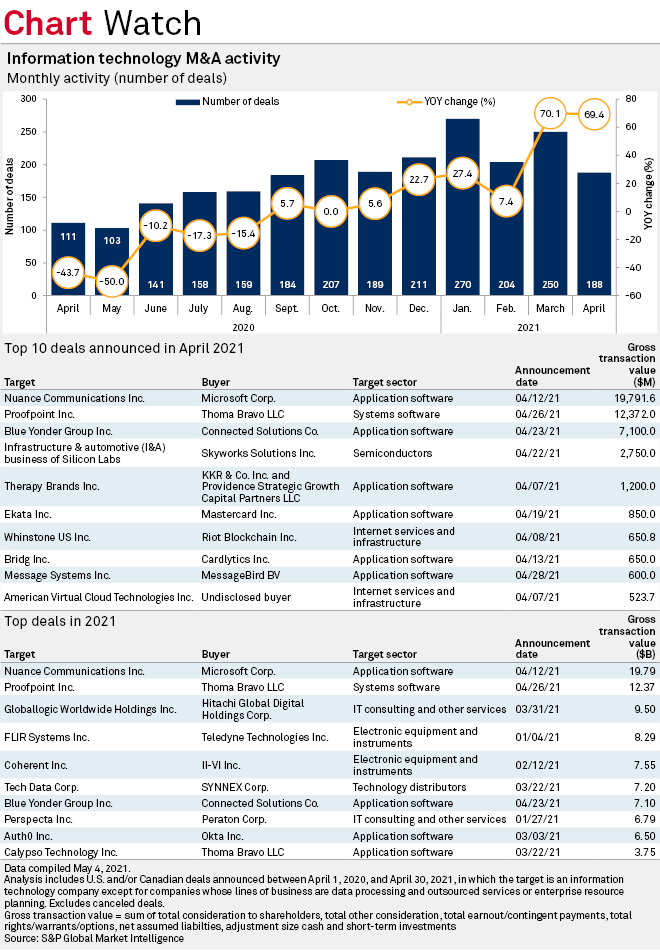 Following up on strong deal volume in March, April continued to accelerate information technology M&A activity as deep-pocketed buyers paid hefty premiums to pad their tech portfolios. Sector deal volume was up 69.4% year over year in April at 188 transactions announced. While that was down from the 250 deals announced in March, April clocked the two biggest deals of the year for information technology, and saw five deals with announced transaction values over $1 billion.
—Read the full article from S&P Global Market Intelligence

It’s been suggested that high active share is associated with outperformance, although the evidence on the question is far from conclusive. Although high active share may (or may not) be a necessary condition for active success, it cannot be a sufficient condition. Can an underperforming manager improve his results by randomly selling half the names in his portfolio, thus creating more concentration?

U.S. Lodging Might Be Reaching An Inflection Point On The Path To Recovery

The U.S. Lodging sector is showing signs of recovery and has potentially reached an inflection point, with revenue per available room (RevPAR) up nearly 250% in April led by growth in the luxury segments. With the good pace of U.S. vaccinations, massive fiscal stimulus and consumer savings, and pent-up demand for leisure travel, it's plausible the worst is behind us and that upside to S&P Global Ratings’ base-case forecast could materialize.

Colonial Cyberattack Raises A Question: Can Whole-System Shutdowns Be Avoided? 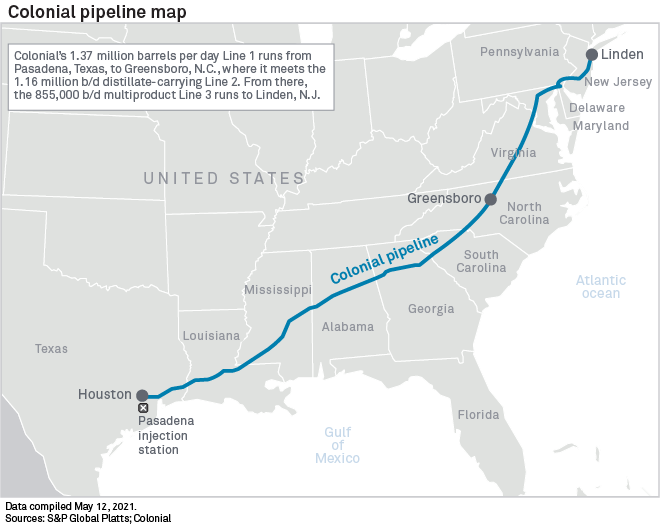 Cybersecurity and information technology professionals warn that following industry best practices alone may not prevent cyberattacks from infecting the systems that control the nation's vast energy infrastructure. With legacy pipeline assets becoming more connected and ransomware on the rise, attacks that shut down physical infrastructure are becoming more commonplace, they said.
—Read the full article from S&P Global Market Intelligence


China has laid out some lofty goals for its climate action. In September 2020, it pledged that it would peak its carbon dioxide emissions before 2030 and hit carbon neutrality before 2060. This was followed in December 2020 by an announcement to enhance its nationally determined contributions under the Paris Agreement for 2030, including increasing the share of non-fossil fuels in primary energy consumption to around 25%. Earlier this year, it issued rules for its emissions trading scheme for the power sector and carbon trading is expected to begin in late 2021. How realistic are these goals? How can China's climate policy align with its economic and social goals? And what is the role for fossil fuels in a carbon neutral China? These questions are more are addressed on this episode of Future Energy Podcasts, with S&P Global Platts Editorial Team Lead for LNG and Energy Transition Eric Yep, Platts Analytics Lead for Global Coal Matthew Boyle, Platts Senior Writer Oceana Zhou, and Dr. Philip Andrews-Speed, senior principal fellow at the National University of Singapore's Energy Studies Institute.

While momentum from policy makers around emissions reductions has been gathering pace, with over 46 countries announcing long-term net zero pledges so far, accounting for about 70% of total electricity power demand, the reality is that short-term energy markets are moving in the opposite direction as global thermal and coal-fired generation are increasing across key markets. The International Energy Agency on May 12 forecast a major rebound in oil demand of some 6.5 million b/d between the first quarter and the end of 2021, and said likely supply growth, by the OPEC+ group and others, would be "nowhere close" to the expected demand increase.