Prices are dropping. Energy producers are picking up the pace of their investments. Market participants are moving beyond the hype. As the race toward decarbonization revs with intensifying urgency, hydrogen appears to be the transition fuel that will power the global economy across the net-zero finish line.

While the majority of hydrogen currently in production is generated from fossil fuels—most common is grey hydrogen from natural gas, and cheapest is brown hydrogen from coal—low-carbon hydrogen is being lauded for its usefulness and versatility across the energy value chain. Market participants are focusing their technological development largely on blue and green hydrogen, created from natural gas through carbon capture and renewable energy to drive emissions-reduction efforts. South Korean oil refiner Hyundai Heavy Industries Holdings and Saudi Arabian giant Aramco announced on March 4 their collaborative blue hydrogen and ammonia projects, and Australian mining multinationals Rio Tinto and BHP said in February that they will work with Japanese steelmakers Nippon Steel and JFE Steel on green hydrogen technologies to reduce greenhouse-gas emissions from steelmaking. Experts believe the costliness of the equipment needed to produce low-carbon hydrogen and the price of the energy itself will decrease in the coming years, which will ultimately remove barriers to entry and democratize hydrogen.

"The whole scheme of colors is built to be informational," Daryl Wilson, the executive director of the Hydrogen Council, said March 3, according to S&P Global Platts, explaining that establishing a system where carbon content is measured by its life cycle emissions over time, rather than separating hydrogen into production pathways defined by colors, can enhance market development. "But the more mature approach is to look at the amount of CO2 per kilogram of hydrogen—that is more reflective of reality."

Further collaboration between governments, investors, and companies will be needed to accelerate the nearly 230 large-scale hydrogen projects, totaling $300 billion in combined investment through 2030, currently in the works worldwide across more than 30 countries, according to the Hydrogen Council.

Hydrogen investment is expanding across Europe, where the green hydrogen market is booming; Asia, with Japan at the center; as well as Australia and New Zealand—while the U.S. lags behind despite many North American utilities and midstream pipeline operators encouraging the innovation.

By centering hydrogen as a key part of the country’s clean-energy agenda and implementing tax credits to advance research and development, among other initiatives, “the U.S. has the opportunity right now to take additional steps necessary to accelerate hydrogen investment and be a leader in decarbonized hydrogen production and supply with the accompanying environmental and economic benefits," Linda Dempsey, a vice president of public affairs at the leading global hydrogen manufacturer CF Industries, said during a March 9 webinar, according to S&P Global Platts.

“In Europe, a lot of the initiatives are certainly government-driven. In the U.S. ... many of the initiatives [are] actually company driven,” Andrew Marsh, the CEO of the N.Y.-headquartered fuel-cell and electrolyzer-maker Plug Power, told S&P Global Market Intelligence. “Where government policy really helps ... is to accelerate the adoption of this technology and to create a fair playing field ... I think what the Biden administration hopes to do is to develop a tax code that incentivizes the future, [which] will be very beneficial to renewables across the board.”

Despite the excitement surrounding hydrogen, widespread adoption at scale won’t occur overnight. This decade, rather than this year, will mark hydrogen’s moment.

"We're going to have a real hydrogen market for real, and a lot of money is going to go into it and build it," Julio Friedmann, a senior research scholar at Columbia University's Center on Global Energy Policy, told S&P Global Market Intelligence’s Energy Evolution podcast. "But it won't be turnkey, and it won't be next year. There's a lot of work between here and there."

Today is Wednesday, March 10, 2021, and here is today’s essential intelligence.

Economic Research: China Finally Retires Its "Growth Above All" Policy 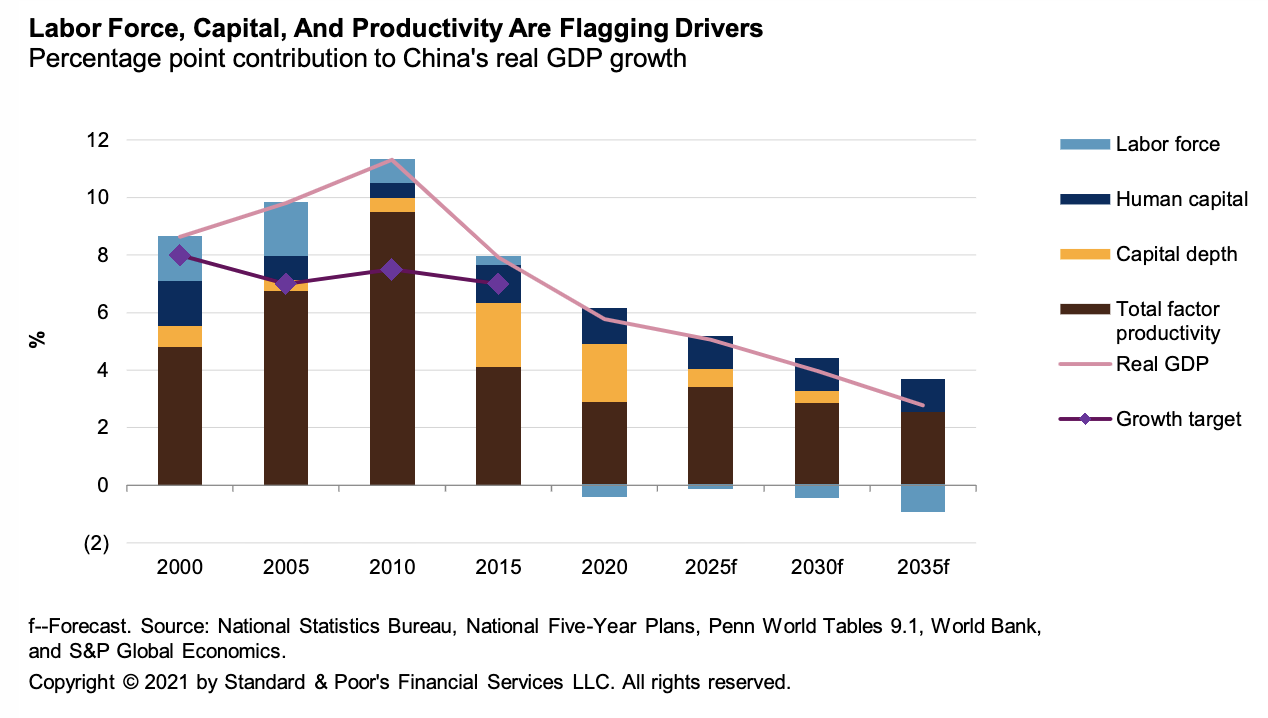 China announced a growth target for 2021 of "above 6%" and omitted a target in its five-year plan. This gives flexibility to achieve other priorities. Near-term growth has been de-emphasized, decisively. China's social, technology, financial stability, and environmental goals are taking precedence and achieving them will mean sacrificing growth momentum. S&P Global Ratings’ forecast for 2021 is 7% with moderate upside risk. A less constraining set of targets is also consistent with an economy experiencing structural downward pressures, including an aging society. S&P Global Ratings expects average growth between 2021 and 2030 of about 4.6%.

The U.K.'s third national lockdown will limit GDP growth in 2021 to 4.3%, after which we forecast an acceleration to 6.8% in 2022. Conditions for a rapid, consumer-led recovery remain in place, with strong fiscal and monetary policy support. The recovery will begin in second-quarter 2021 but from a much lower starting point because of the contraction in the first quarter. S&P Global Ratings’ forecast is subject to significant uncertainty on both sides because of the unique and novel shock that the pandemic and lockdowns present. 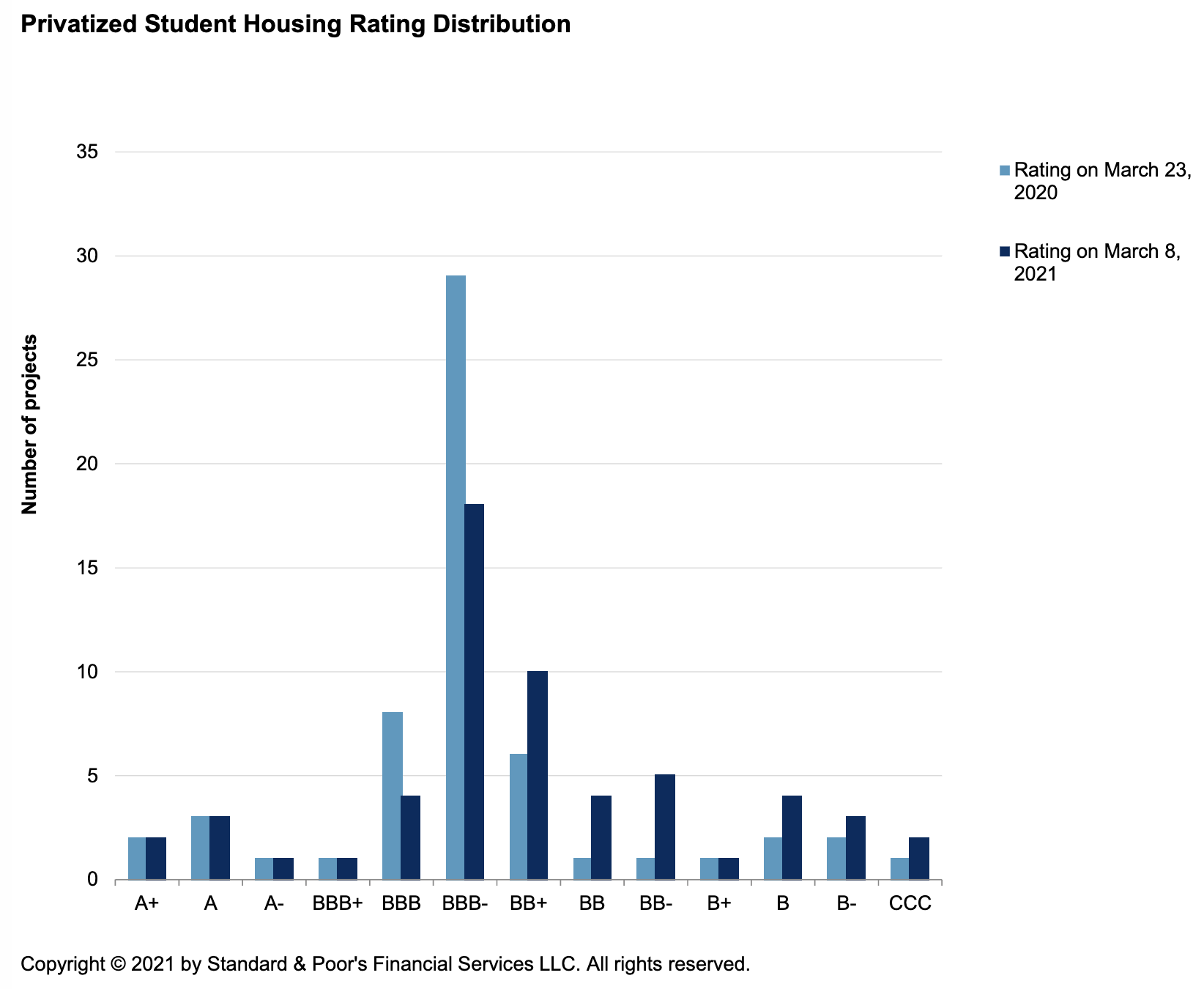 Pro-rated refunds for the spring 2020 semester and continued occupancy declines due to capacity and de-densification constraints imposed by associated institutions and state guidelines caused unprecedented financial stress for several of our rated projects.

Surge In Bond Yields Strengthens The U.S. Dollar, But Rally May Be Short-Lived 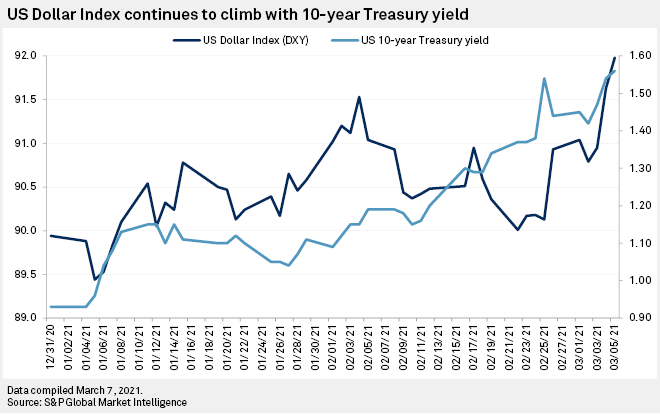 The recent surge in the benchmark U.S. Treasury 10-year bond yield has bolstered the pandemic-battered U.S. dollar, but whether the greenback's momentum will continue depends on yields keeping a rapid pace of gains and if shorter-term bond yields begin to move. 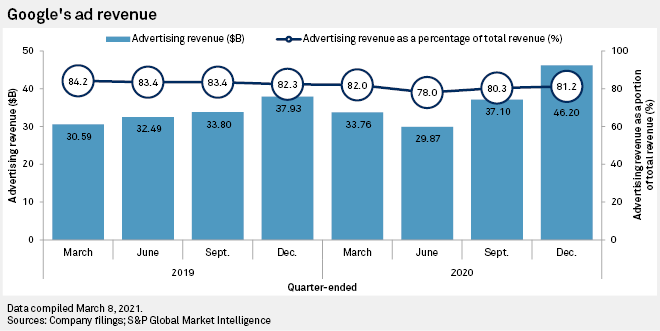 Google LLC's decision to stop tracking individual web browsing activity in its products and services marks a notable shift for the digital advertising market, but analysts said the move aligns with a broader push by consumers and regulators for more data privacy.

Illustrating how much appetite there is for multibillion dollar infotech combinations, February's two largest deal announcements were competing offers for the same company — imaging and optics firm Coherent Inc. And those came after the initial bid for the company marked the third largest deal in January.

First-Time Acquisitions Of Digital Businesses Expected To Continue In 2021

Corporations that never before acquired businesses in the digital space rushed to purchase ventures in the Internet and e-commerce categories last year, a trend analysts expect to continue in 2021 as buyers target deals that bolster their online presence.

M&A deal volume among U.S. and Canadian media and telecommunications companies fell 16.4% year over year in February even though the sector saw three deals that crossed the billion-dollar mark during the month. 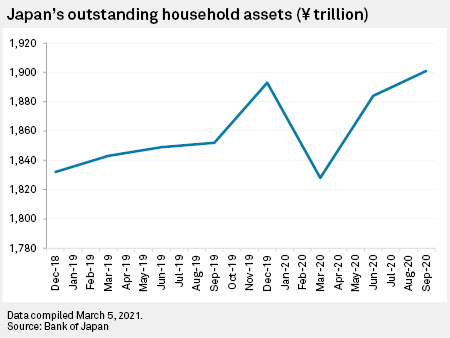 Japan's latest plan to woo more foreign asset managers could help broaden the range of investment products and improve the returns on more than $18 trillion of household assets, more than half of which are held as cash or parking at banks as savings earning near-zero yield.

U.S. federal regulators' final environmental review released March 8 for the 800-MW Vineyard Wind offshore wind farm off the Massachusetts Coast identified a preferred project alternative that would include no more than 84 wind turbines and prohibit installing turbines in six locations.

The development of green hydrogen trade between countries is reliant on an international guarantees of origin scheme agreed by all key proponents, intergovernmental organization the International Renewable Energy Agency (IRENA) said March 9. In this week's highlights: Nord Stream 2 development picks up, polymers hit record high prices, and the EU is set to vote on carbon border adjustment.

The US Federal Energy Regulatory Commission faced stiff questioning from appeals court justices over whether it too readily accepted a pipeline company's assurances about the need for a natural gas pipeline project backed only by an affiliate.

The global grains market, which saw a price rally across all major commodities in 2020 following an unprecedented supply-demand scenario, is more likely to be driven by the insatiable hunger of key grain buyers in future while supply restrictions become less relevant, Abdolreza Abbassian, senior economist at the Food and Agriculture Organization, told S&P Global Platts in an interview.