The delta variant of the coronavirus is gaining a stronghold in the U.S. alongside continued vaccine hesitancy. But the recovery of the world’s largest economy surges forward—on track toward reaching pre-crisis growth in just a few months.

With just under half of the country—around 48%—fully vaccinated, the U.S. is now confronted with a significant increase of new cases in states with the least number of vaccinated people who are most at risk to the threat of the more-infectious delta strain. The U.S. has already totaled 34.5 million cases and 611,000 deaths, according to Johns Hopkins University data. Nonetheless, Americans are largely still comfortable dining out, traveling, visiting hotels, and going to see movies as mobility across the nation recovers. This trajectory is expected to improve tremendously.

“The U.S. economy continued its strong reopening in June, with real GDP, in dollars, reaching its precrisis peak in the second quarter. According to our June baseline forecast, we expect that U.S. GDP will climb to its precrisis growth path in the third quarter this year, with stronger service consumption and cooler, but more sustainable, durable goods consumption and residential investment,” S&P Global Ratings Chief U.S. Economist  Beth Ann Bovino said in a report this week. “Our forecasts of real GDP growth for 2021 and 2022 are now 6.7% and 3.7%, respectively, up from 6.5% and 3.1% in our December report, with our 2021 GDP forecast targeting the highest reading since 1984.”

The strength of the rebound is also reflected in credit conditions. Corporate borrowers are principally recovering faster than expected, and many will likely see a full return to pre-crisis levels later next year. The immediate-term may see many corporate borrowers focus on addressing the secular changes accelerated by the pandemic, rather than need to continue combatting the implications created by the COVID-19 crisis. The longer-term could see the corporate landscape shift even further with a surge of mergers and acquisitions aimed at appealing to consumer behavior that has been reshaped by the events of the last year with new business models.

“As the U.S. economic rebound continues, corporate borrowers across nearly all sectors are enjoying a recovery that, in many cases, has paved the way for a return of business activity to pre-pandemic levels somewhat sooner than we expected,” S&P Global Ratings said in its corporate credit midyear outlook this week. “This is especially true for the services sectors, which were hardest hit by the pandemic and related social restrictions but are now reaping the benefits of pent-up consumer demand and a household savings rate that has been swelled by massive government stimulus.”

As companies scramble to secure low-cost funding before the Federal Reserve implements any monetary policy changes, U.S. investment-grade corporate bond sales may reach historic highs this year, according to S&P Global Market Intelligence. Central bank policymakers have signaled that the pace of the economic recovery may be cause to begin winding down some market support.

"If COVID does not re-emerge, high-grade bond issuance should remain strong in the second half of 2021," Gary Lembo, a partner at the advisory firm Paladin, told S&P Global Market Intelligence. "If COVID does re-emerge, companies will likely slow their M&A activity until such time COVID goes away."

To be sure, Americans are now more worried about another wave of COVID-19 in addition to their concerns over higher prices, according to preliminary University of Michigan sentiment data. The base effects from the pandemic that prompted initial depressed prices are no longer the drivers of recent price gains, which have been boosted across many sectors by supply and labor constraints.

“While corporate borrowers in many sectors are feeling some input-price pressures, we expect this to moderate in the next year or two, as the economic recovery starts to level off and business activities return to more normal levels. For now, industries have largely been able to deal with rising prices via cost savings, productivity gains, or cost pass-through,” S&P Global Ratings said in its credit conditions report. “We continue to believe the jump in inflation will be transitory, but a prolonged period of rising prices would pose downside risks for many borrowers.”

Today is Wednesday, July 28, 2021, and here is today’s essential intelligence.

Acute civil unrest in some parts of South Africa has disrupted the operations of some retailers and supply chains. Although order has been largely restored, with a slow resumption of supply chains, S&P Global Ratings believes the damage to elements of the country's retail and financial infrastructure, economy, and consumer and investor confidence will take longer to repair.

Aon PLC and Willis Towers Watson PLC scrapped a $30.55 billion merger amid the prospects of a drawn-out battle with the U.S. Department of Justice, marking the third-largest insurance deal termination since 2016. The deal's cancellation, announced March 9, 2020, comes just over a month after the DOJ filed a lawsuit to block the merger. In its complaint, the DOJ said Aon acquiring Willis Towers Watson would violate antitrust laws, reduce competition and spur both higher prices and less innovation in the industry.

European Corporate Credit Outlook Midyear 2021: Back the Way We Came 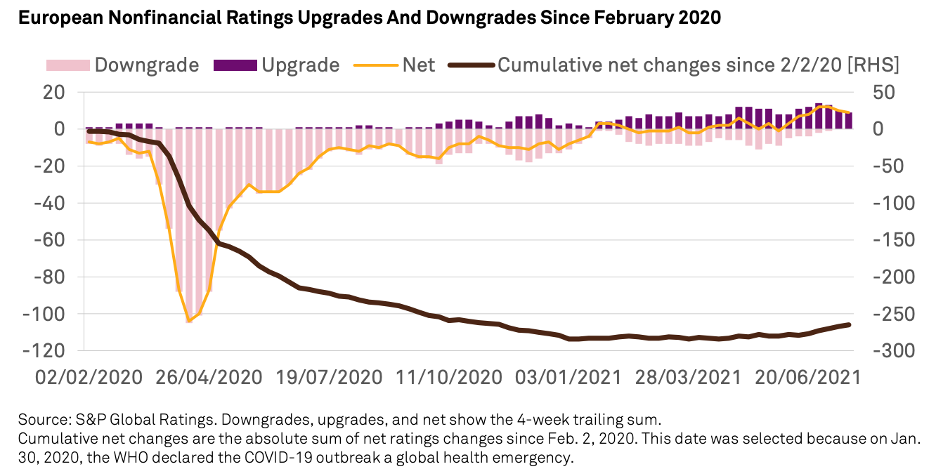 The credit outlook is rapidly improving, thanks to powerful policy stimulus, successful vaccine rollouts, rebounding profits, and a deluge of liquidity. Corporate confidence and a focus on growth means a continuing focus on M&A and a boom in European capex. Credit quality remains depleted by the fallout from COVID-19, with leverage still high, vulnerable capital structures, and liquidity pressures in sectors most disrupted by the pandemic. 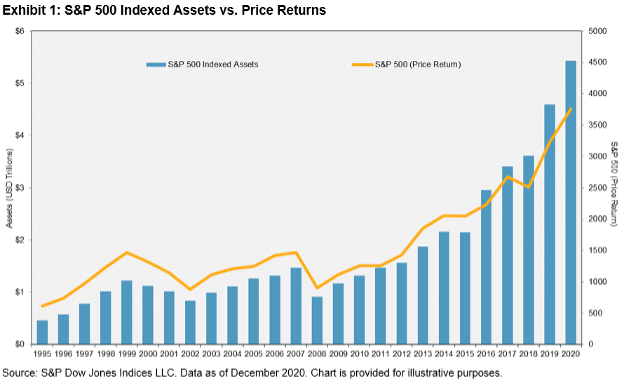 In the 20 years ending in 2020, 94% of all large-cap U.S. managers lagged the S&P 500®. Mid- and small-cap results were almost equally disappointing. A notable consequence of these shortfalls in active performance has been the rise in passive investing, one of the most significant trends in modern financial history. S&P Dow Jones Indices’ recent Annual Survey of Indexed Assets shows a surge in assets tracking the S&P 500 to $5.4 trillion as of December 2020. This growth outpaced the growth due to market gains, indicating a substantial increase in flows.

Australian wheat prices are expected to continue their bullish trend for the next 2-3 months on weaker competition from other major producers and rising demand from Asia, the world's largest wheat-buying region, sources said. 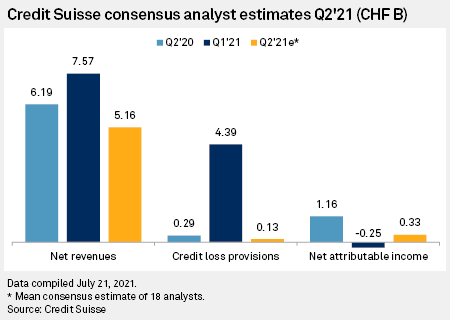 Analysts remain cautious in their forecasts of Credit Suisse Group AG's performance in the near term as the collapses of Greensill Capital (UK) Ltd. and Archegos Capital earlier this year continue to weigh on the bank. Despite the underlying strength of its franchise, Switzerland's second-largest lender by assets will need a few quarters to recover from the twin crises, the fallout of which exposes it to profitability, stock performance and reputational risks, according to market observers.

Netflix And The High Cost Of Growing Lower-Revenue Users 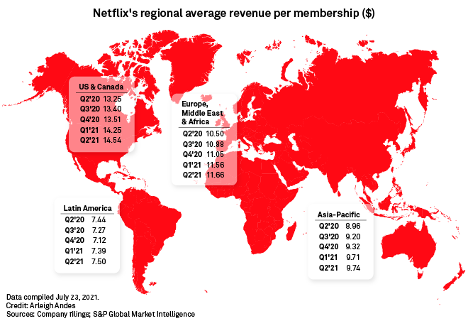 After seeing a surge in streaming during the pandemic, Netflix Inc. could now be facing a growth problem. Some of the company's most valuable markets by average revenue per user are showing signs of maturity. In the second quarter, the U.S. and Canada saw a net loss of subscribers, and growth in Europe, the Middle East and Africa slowed. Meanwhile, Netflix's Asia-Pacific regional segment accounted for the bulk of the company's second-quarter membership growth, but those customers generate less revenue and lower margins for Netflix.

Can Private Clouds Ever Really Compete With the Public Cloud?

For years, a debate has been raging: Which is the cheapest option, the public or private cloud? As with most things, the answer isn't binary, and depends on a variety of things. But the hyperscalers are in a position to squeeze costs more than most, and may have an upper hand in the future. How should smaller service providers and tech vendors face this challenge? 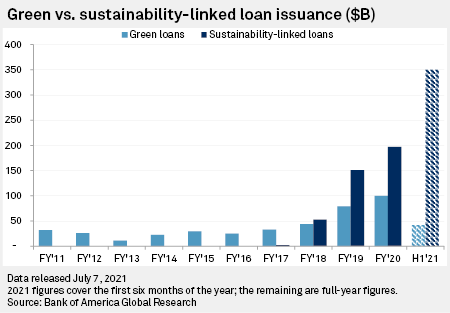 Global issuance of sustainability-linked loans has far surpassed that of green loans and bonds as companies in the U.S., including those in transition sectors, rapidly embrace the instrument as an alternative to traditional environmental, social and governance debt. The product, which gives companies a discounted rate if they meet tailor-made sustainability targets, also continues to thrive in Europe, where uptake has been the highest to date.

Linde PLC, Air Liquide SA and Air Products & Chemicals Inc., which derive between about 10% and 25% of their total revenue from producing gray hydrogen, made with fossil fuels, are set to be key players as momentum builds globally around the production of low-carbon hydrogen. That includes green hydrogen, made with renewable electricity, and blue hydrogen, produced with natural gas and carbon capture technology.

Bee'ah, the UAE-based company developing the country's first $180 million waste-to-hydrogen plant, is eyeing a 2023 start-up for the facility and is scouring for more similar projects in the Middle East and North Africa region, its CEO told S&P Global Platts.

The US Department of Energy's newly rebranded Office of Fossil Energy and Carbon Management aims to fund the research and technology deployment that will help the US reach net-zero carbon emissions by 2050. S&P Global  Platts spoke with Acting Assistant Secretary Jennifer Wilcox, head of the office and a carbon capture expert, about some of the promising technologies to curb US dependence on fossil fuels and cut emissions. We talked about harder-to-decarbonize sectors like aviation, shipping and long-haul trucking, as well as a proposal to expand the 45Q tax credit for carbon capture. 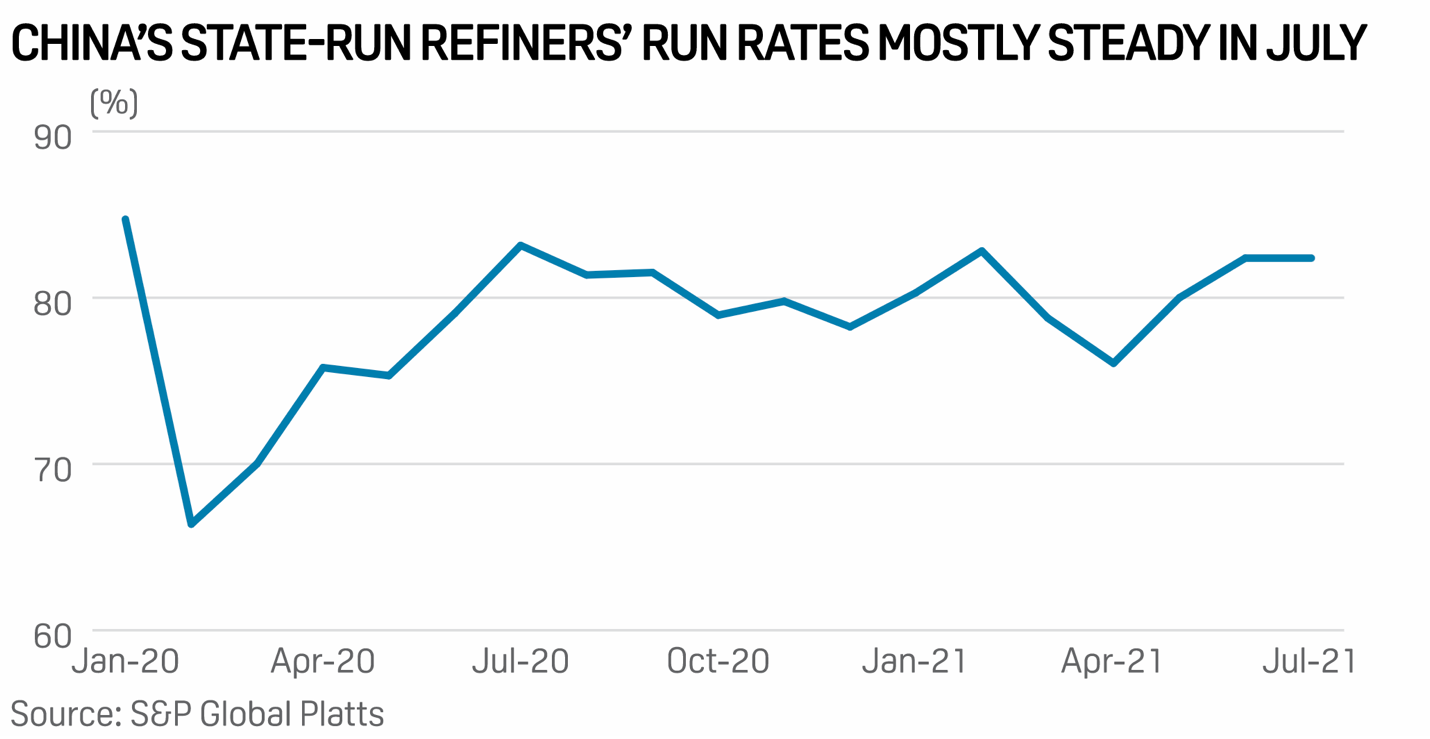 China's crude throughput in July will likely fall slightly from the record high in June as expected cuts by private refiners over the month amid adverse weather offset the impact of mostly steady run rates at state-owned refiners.

The Biden administration will likely release its long-awaited plan for oil and gas leasing on federal lands and offshore Gulf of Mexico as soon as the US Senate votes on a key Interior Department nominee, analysts said. Tracy Stone-Manning's nomination to lead the Bureau of Land Management is awaiting a final vote by the full Senate after advancing from committee with a party-line tie, which Vice President Kamala Harris can break.