The world’s second-largest economy and top emitter of carbon has this month begun expanding its efforts to scale back its steel output to maintain this year’s production levels below last year’s.

After peaking in March, China’s steel production would have to decline 10% year-over-year to match 2020’s output, according to S&P Global Platts’ analysis of China’s National Bureau of Statistics data. But market sources told S&P Global Platts that China’s steel demand may not decline in the second half of the year since the output reductions to be implemented from July-December may lead to steel supply shortages, higher prices, and increased pressure on manufacturers.

Market participants expect the steel industry to support China’s economy against slower property and infrastructure activity and demand in the second half. A downturn could have expansive effects. Uncertainty surrounding the direction of the market has already contributed to concerns about high steel prices and margins alongside disrupted trade.

"Recently, the Chinese have tried to push it [the metals market] down to bring it back to lower levels: I think this is a short-term game because the underlying fundamentals will keep it at these levels," Ivan Glasenberg, CEO of the metals producer and trader Glencore, said in an interview last month during the Qatar Economic Forum, according to S&P Global Platts. "They're taking some material from the strategic stockpiles and putting that in the market—how big the stockpiles are we don't know exactly ... They can do this for a while but eventually they'll need to restock the strategic stockpiles. They can't keep it at these low levels, so it's a short-term phase."

The steel industry has also felt pressure from China’s financing slowdown in recent months due largely to lower local government bond issuance and curtailed conditions for property developers and home buyers. The lower fiscal support is expected to weigh on China’s combined infrastructure and property steel demand, which accounts for approximately 50% of China's total steel consumption, according to S&P Global Platts.

“What's good for the Chinese economy is good for the mining industry,” S&P Global Ratings said in its third quarter metals and mining sector outlook for the Asia-Pacific region. “Given that China accounts for over half of global demand for raw materials, a prolonged weakness in demand from its downstream sectors may strain global miners. Resurgent pandemic risks pose a key threat to demand, while any change in environmental-related production controls in China could affect the profitability of its steel industry and the demand for commodities.”

S&P Global Ratings anticipates China’s GDP will expand 8.3% next year, after being one of the first economies in the world to recover from the downturn.

China’s efforts to reduce carbon emissions through quota trading and carbon-free metallurgical technologies are likely to bolster Chinese steel prices in the long-term. The implementation of such emission and production controls across China’s steelmaking sector in the second half may weaken demand for the commodity, further affecting prices. Commodity prices are separately rising to historic highs as the post-pandemic economic recovery sends inflation surging. Commodities have traditionally proved to be a relatively reliable hedge against inflation, according to S&P Dow Jones Indices.

Today is Wednesday, July 14, 2021, and here is today’s essential intelligence. 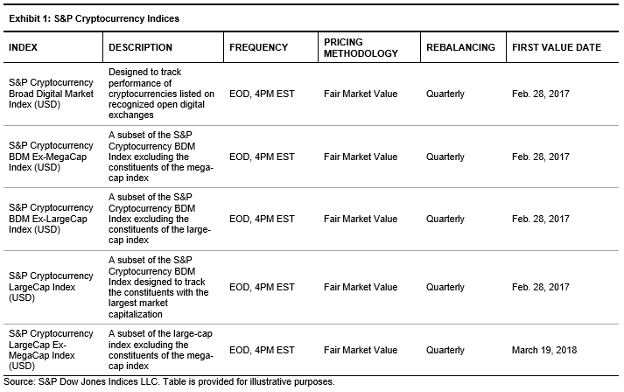 A flurry of 10-figure private equity deals boosted M&A activity in the information technology space during June, with Morgan Stanley advising on some of the largest transactions. While there were no megadeals for the month, deal values in general maintained strength as five transactions crested the $1 billion mark. 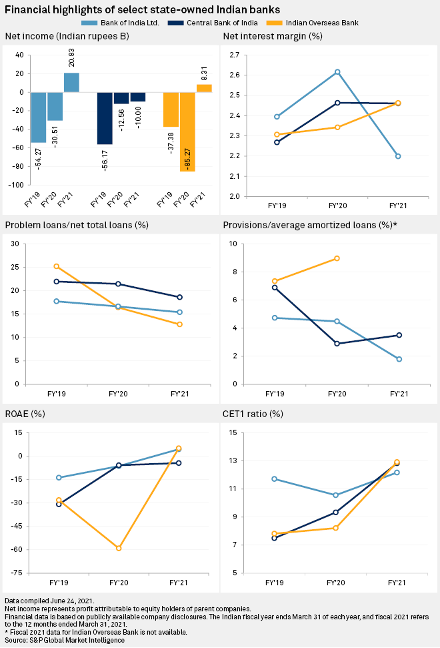 India will likely need to pump in additional capital into any state-owned banks it puts on the block to make them attractive for potential buyers, and faces challenges that range from the need to amend the nation's banking laws to hostile employee unions, analysts say.

Commercial banks will play "a very important role" in Sweden's project to create a central bank digital currency despite concerns that it could erode traditional lenders' deposit bases, according to a payment executive at Svenska Handelsbanken AB.

Banking customers' shift toward digital channels during the pandemic is likely here to stay. A significant portion of retail banking consumers continue to visit branches less often and use their mobile apps more frequently nearly one year after the COVID-19 pandemic began, and many anticipate continuing their new behaviors well after the pandemic ends.

Pandemic Pushes Customers Out of Branches, Banks Ramp Up Closures

One year after the pandemic began, over half of respondents to S&P Global Market Intelligence's annual Mobile Banking Consumer survey reported visiting branches less frequently, and several expressed concerns regarding the safety of branch visits. As the pandemic has persisted for over a year and influenced all aspects of consumer behavior, the likelihood that new branch-related behavior will become entrenched remains high. 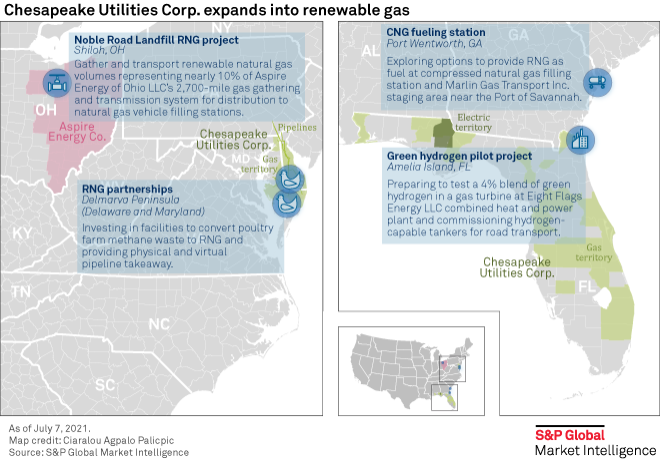 In a pair of interviews with S&P Global Market Intelligence, Chesapeake Utilities executives discussed the RNG opportunity — one of five key strategic initiatives through 2025 — and their plans to establish a foothold in the emerging hydrogen economy. They expect that the plans could help Chesapeake grow and decarbonize its business and see the company expand its geographic footprint. However, when evaluating RNG opportunities, the company said it will continue to think locally.

With appetite for higher conviction ESG strategies on the rise, how could these darker green approaches help market participants align investments with ESG values? Jon Winslade and Jaspreet Duhra of S&P DJI join Andrew Walsh of UBS Asset Management for a closer look at the S&P 500 ESG Elite Index.

Black and Hispanic employees make up about 13% and 18% of the pharmaceutical workforce, respectively. However, these groups only account for 8% and 9% of science, technology, engineering and mathematics — known as STEM — occupations within the sector, according to Lori Reilly, COO of the Pharmaceutical Research and Manufacturers of America, the trade group known as PhRMA.

Fuel For Thought: Deal or No Deal, Many OPEC+ Countries Will Struggle to Produce More Oil 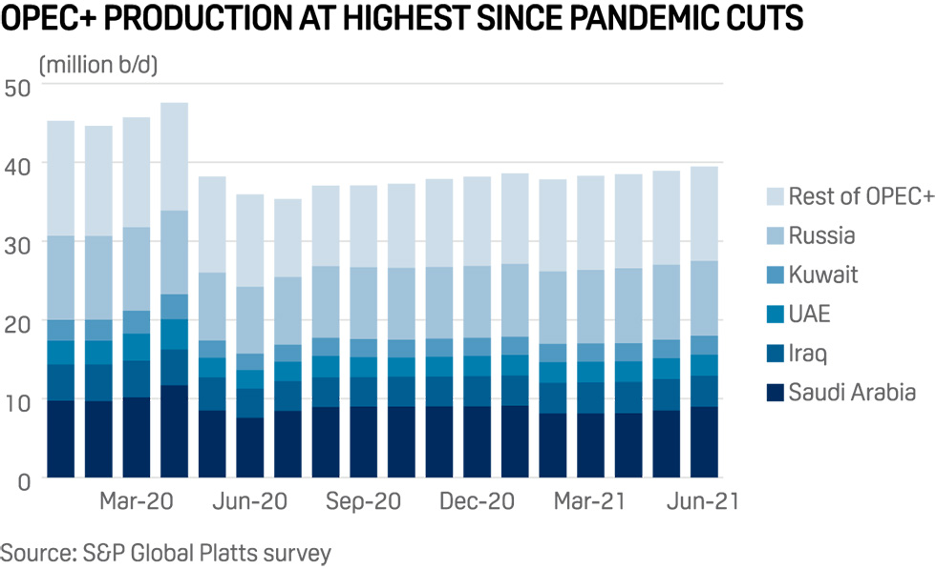 OPEC's latest rift between estranged oil allies Saudi Arabia and the UAE has dominated market headlines, but even bigger cracks within the organization are looming. As the world continues to look to the bloc and its partners for more volumes of crude, gaps between its haves and have-nots are widening.

Too Late for an August Deal, OPEC+ Still Hopes to Head Off an Oil Squeeze

OPEC and its allies have thrown in the towel on clinching an oil supply accord for August and are now hoping for a deal to cover September and beyond, delegates told S&P Global Platts, though little progress has been made in the standoff between Saudi Arabia and the UAE.

Oil, Gas Capital Raises In June: Total Raised Slows Down to $6.84B

U.S. and Canadian oil and gas companies covered by S&P Global Market Intelligence raised $6.84 billion of capital in June, with approximately $5.43 billion coming from debt offerings. The amount is a decrease from the $8.15 billion of capital collected in the prior month.