Despite this week’s turmoil in Washington, where an armed mob of Trump supporters took the Capitol under siege on Jan. 6 in what was described by officials as an “insurrection,” equity markets have continued their record rally. The tech-heavy Nasqaq rose 2.56%, the benchmark S&P 500 index climbed 1.5%, and the Dow Jones Industrial Average increased 0.7% on Jan. 7, marking three consecutive days of positive performance.

Wednesday’s events at the Capitol had “political significance, but they were not market moving” as the S&P 500 rose 0.6% on the day, Chris Bennett, director of index investment strategy at S&P Dow Jones Indices, said in a Jan. 7 note.

Democrats’ flipping of Georgia’s two Senate seats in a special runoff election, and now in control of both houses of Congress, proved to bolster equities—fueled by investors’ optimism about the potential for a significant increase in government spending. The price of precious metals remained steady following the outcome of the election in Georgia, with the London Bullion Market Association gold price rising from $1,862 per ounce to $1,947 per ounce from Dec. 16 to Jan. 5, before falling to $1,902 as of Jan. 6, according to S&P Global Market Intelligence. This indicates that the price of gold is likely far from returning to the lows seen in December of last year.

In fact, the extraordinary volatility experienced across markets in 2020 may signal what is next to come.

“For many equity investors, the stand-out theme of last year was the reversal in the market’s initial response to, and recovery from, the COVID-19 pandemic: the dramatic price declines in March, the wild swings around the bottom as VIX marked its highest closing level ever, and the just-as-dramatic recovery to new all-time highs by late summer. That reversal set the big picture: after its recovery and barring a few small bumps along the road, the S&P 500 continued to break records for the remainder of the year, celebrating with a final closing record high on Dec. 31, 2020,” Tim Edwards, managing director of index investment strategy at S&P Dow Jones Indices, said in a Jan. 7 commentary. “Large, tech-related, growth companies benefited from the changing circumstances of the pandemic, while smaller companies, and energy and value companies in particular, continued their multi-year trend for underperformance.”

The S&P 500 gained 16.3% last year—and the majority of the benchmark’s sectors rallied, according to S&P Global Market Intelligence analysis. The Information Technology sector jumped 42.2% from January-December despite the coronavirus pandemic and accompanying economic downturn, followed by Consumer Discretionary’s rise of 32.1%, aided in December by Tesla Inc.’s record performance. The newcomer to the S&P 500 skyrocketed 672.1% during the year, making it the index’s best performing stock following its debut.

While the S&P 500’s Energy sector suffered sharp losses in 2020—declining 37.3% largely due to the prolonged implications of April’s oil price crash, according to S&P Global Market Intelligence—the tide turned toward year-end. Energy stocks outperformed the broader market in the fourth quarter, with the S&P 500 Energy Index up 27.8% compared to the S&P 500 gains of 12.1%. Likewise, analysts foresee the rally that commodities experienced in December continuing in 2021.

After Saudi Arabia surprised market participants on Jan. 5 by announcing it will cut oil output by 1 million barrels per day in February and March, as Russia and Kazakhstan increase their production by 75,000 barrels per day during the same period, the West Texas Intermediate crude futures benchmark climbed to close above $50 per barrel for the first time since February. The oil-price rally continued through the week, with the NYMEX February WTI contract settling at $50.83 per barrel and the ICE March Brent benchmark price closing at $54.38 per barrel on Jan 7.

"Market strength this week seems to be from the Saudi cuts, along with decent data out of U.S. inventories showing a drawdown in crude oil supplies," Price Futures Group senior market analyst Phil Flynn said, according to S&P Global Platts. "There is still some uncertainty on the [pandemic-related] shutdowns that's keeping us balanced here, and momentum was slowed a bit by chaos in Washington.”

Although even value stocks began turning around toward the end of the year, not all equities ended 2020 enjoying outperformance. December saw Walmart Inc.’s shares sink 5.3% during the month, pushing it to the bottom of the S&P 500 Consumer Staples index, according to S&P Global Market Intelligence. This decline followed the U.S. Justice Department’s suit against the retailer for its alleged involvement in the country’s opioid crisis.

Today is Friday, January 8, 2021, and here is today’s essential intelligence. 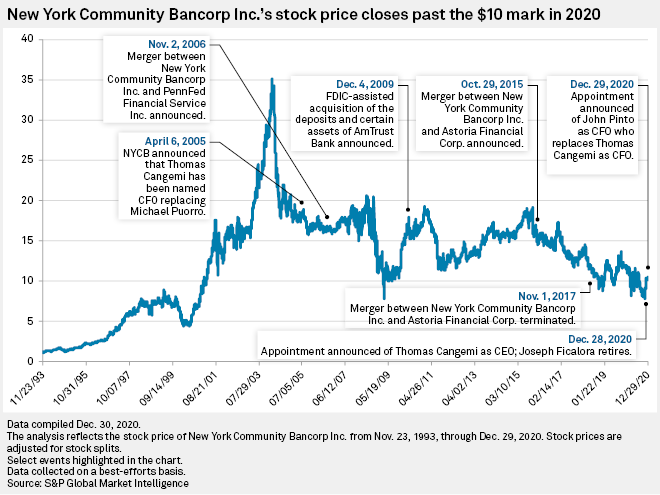 Diversification through M&A may be on the horizon for New York Community Bancorp, Inc. following a natural but abrupt change in leadership, according to analysts.

The Bank of England has warned that the sterling swaps market is not ready for the end of Libor in a year's time, while there are fears that a "synthetic" version for tough legacy contracts could face legal challenges.

Top Wall Street Critic Set to Become New Chair of Senate Banking Committee
The banking industry is facing a prospect this year it would have preferred to avoid: a Democratic majority in the Senate after the party's victory in two runoff elections in Georgia. 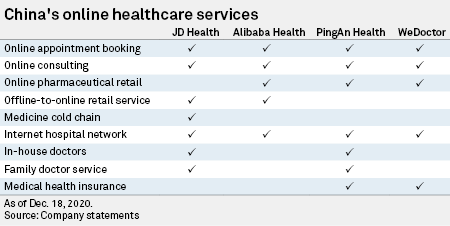 China's crackdown on internet companies, including Alibaba Group Holding Ltd., is unlikely to affect their burgeoning healthcare businesses and could transform the medical sector into a key battleground for e-commerce and tech companies.

Alibaba Group Holding Ltd. faces the risk of being delisted in the U.S. as the outgoing Trump administration considers a potential ban on U.S. investments into the company and its peer Tencent Holdings Ltd., compounding problems for the Chinese e-commerce operator amid a regulatory crackdown at home.

U.S. Sector Readies For Transition Away From Pro-Coal White House

The U.S. coal sector continued to struggle under the pro-coal Trump administration and will likely face new challenges on the political front under a Biden presidency and a U.S. Congress controlled by Democrats.

Phillips 66 is moving its emerging energy operations to a separate segment, which will stand alongside its current and more traditional operating segments to address the "dual challenge of providing energy and deploying the technologies and products that will continue to reduce greenhouse gas emissions," CEO Greg Garland said on Jan. 7.

UK Electric Car Sales On The Rise, But Price Still a Barrier: RAC

Electric vehicle sales in the UK continue to go from strength to strength, giving adoption a bullish narrative, but price remains a real barrier to entry for many, according to data highlighted by driving services group RAC. 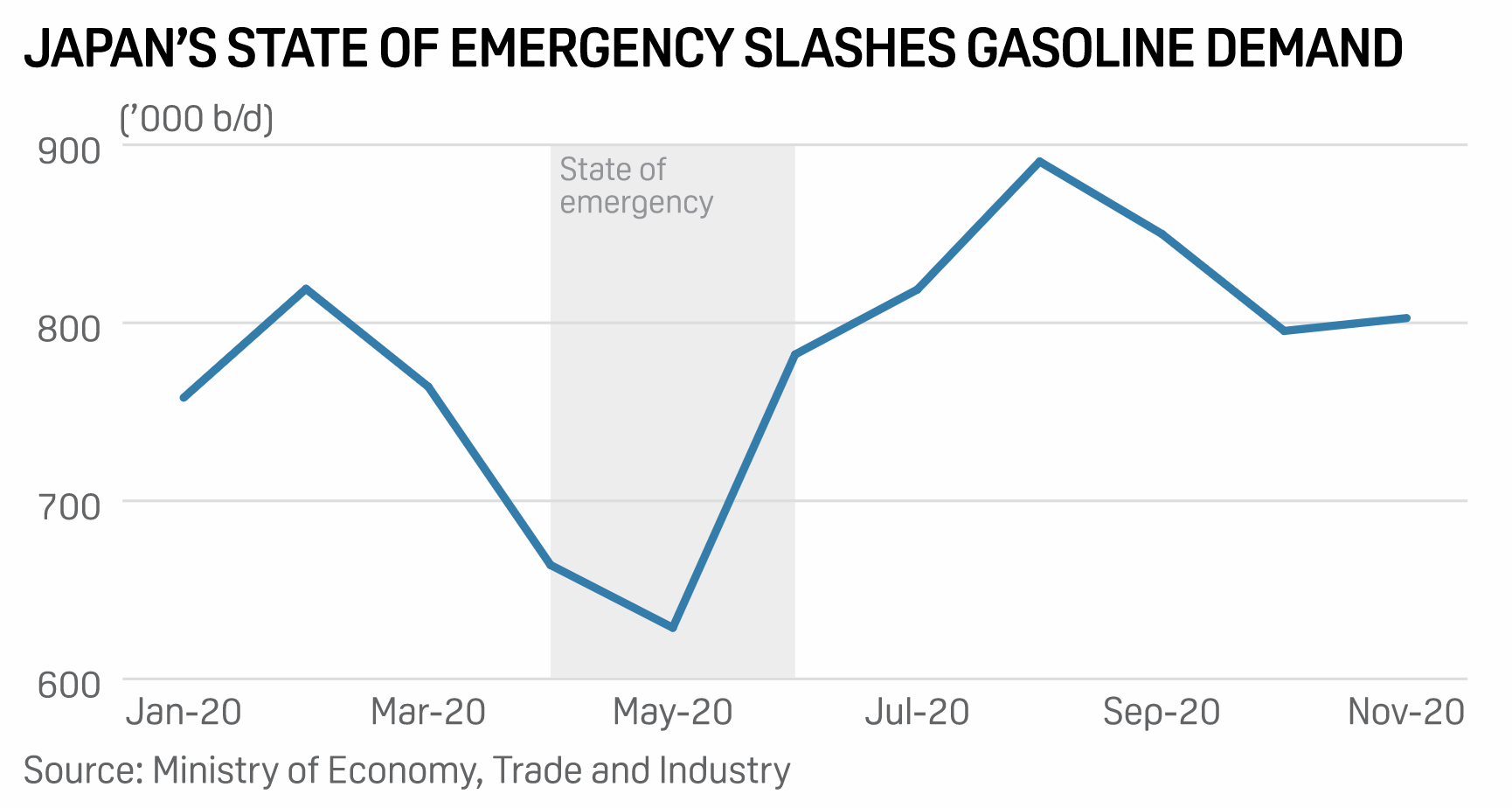 The declaration of a state of emergency by Japan is expected to cast dark clouds over the country's gasoline demand, cutting short the prevailing recovery after a long period of gloom.

A pair of U.S. Senate wins by Democrats in Georgia means that current Majority Leader Mitch McConnell will no longer have the ability to unilaterally prevent the Federal Energy Regulatory Commission from having a Democrat majority this year.

Listen: Diesel Faces Up to the Challenges of 2021

As the major road freight fuel for Europe and beyond, how has diesel coped with the global pandemic and what are its prospects heading into the new year? Platts reporters Virginie Malicier and Rowan Staden-Coats discuss the diesel markets with Joel Hanley.