Former Vice President Joe Biden will be inaugurated as the 46th U.S. president today as the country surpasses 400,000 deaths due to COVID-19.

President Biden’s first 100 days in office—a notable period for new U.S. leaders to turn their political promises into policies and define a governing style—will be marked by a plethora of executive orders addressing the coronavirus pandemic’s public health and economic implications, kickstarting his climate agenda, and targeting the reversal of policies implemented over the previous four years by the Trump administration.

Of potential executive orders that the most powerful economy in the world’s new leader could soon implement, “the low-hanging fruit for a Biden presidency would include temporary protected status for all immigrants arriving from COVID-infected countries, shutting down oil and gas leasing on federal lands, redefining poverty levels, and so forth," John Owens, a professor of U.S. government and politics at the University of Westminster, told S&P Global Market Intelligence. “Over the slightly longer term, rejoining the Paris Climate Agreement, appointing a majority to the National Labor Relations Board, forgiving student loans, closing Guantanamo, reworking farm and food policy, lowering the cost of drugs and licensing generic drug manufacturing, [and] providing a public option for financial services,” among other future executive orders.

Environmentalists are enthused with President-elect Biden’s aggressive proposed climate action because doing if enacted, it will allow the administration to simultaneously address intersectional systemic issues.

"You really cannot set aside tackling climate change from their economic agenda," Sara Chieffo, vice president of government affairs at the League of Conservation Voters, told S&P Global Market Intelligence. Climate change "is deeply interwoven and at the heart of how we're going to build back better from this pandemic and the national reckoning we're having about injustice and what drives that and how much systemic racism has driven the problems that we're seeing."

Nonetheless, incoming president will face some pushback from oil and gas companies as the administration seeks to actualize his climate plans. American Petroleum Institute President and CEO Mike Sommers, who leads the industry’s largest trade group, expressed in a Jan. 13 presentation his willingness to work with President-elect Biden on creating “cost-effective policies” to regulate emissions, according to S&P Global Platts—but said that “API will use every tool at our disposal to fight that kind of proposal” that restricts oil and gas leasing and drilling on federal lands.

Coal companies are also adjusting to the new administration with hesitation. Even after President Donald Trump was unable to deliver on his vow to revitalize the coal industry, companies across the sector appear disappointed with the Biden administration’s efforts to impose regulation.

"[During the Trump administration] we at least got our phone calls answered, and we could sit down across the table from agency personnel and talk through some issues," Wyoming Coal Association Executive Director Travis Deti told S&P Global Market Intelligence. "Frankly, we expect those doors to be closed again to us.”

Experts believe trade and tariffs are likely an area the Biden administration will navigate with caution. The country’s trade policy in 2021 will lean toward mending and strengthening trade relationships that were strained under the previous administration, according to Panjiva, part of S&P Global Market Intelligence.

"Trade is going to be a component part of the Biden administration's broader foreign policy and broader domestic policy, unlike [during] the Trump administration, where it was one of the top three issues and in many ways stood in and of itself,” Kelly Ann Shaw, a partner at the law firm Hogan Lovells, said during a Jan. 11 webinar hosted by the international law firm Bracewell LLC, according to S&P Global Platts.

President-elect Biden’s cabinet nominees began the confirmation process yesterday. Former Federal Reserve Chair Janet Yellen, whom the soon-to-be-inaugurated president has selected as his Treasury Secretary, pledged in her Jan. 19 Senate confirmation hearing to be a "voice for fiscal sanity" and to “oppose any and all attempts by foreign countries to artificially manipulate currency values to gain an unfair advantage in trade” if she is confirmed.

The incoming president nominated Gary Gensler—a former Goldman Sachs banker who subsequently led the Commodity Futures Trading Commission through the 2008-2009 financial crisis and has been vocally outspoken against Wall Street—to be the next head of the Securities and Exchange Commission on Jan. 18.

"It's going to usher in a new era at the SEC," Kirsten Wegner, the CEO of high-speed trading advocacy group Modern Markets Initiative, told S&P Global Market Intelligence. "There will be a heightened sense of enforcement and stronger regulations."

Although the bill stipulates one-time cash payments of $1,400 to Americans who earn less than $75,000—which, when combined with the $600 paid out from the previous coronavirus stimulus package, bring the total benefit provided to individuals to the $2,000 that Democrats and former President Trump had requested—the long-term unemployment benefits provided will likely have a greater impact.

“He plans to hit the ground running. The proposed stimulus package, if enacted, will help push back threat of another COVID-19 downturn,” Dr. Bovino told the Daily Update.

Today is Wednesday, January 20, 2021, and here is today’s essential intelligence.

Consumers in China are still cautious and financial conditions remained tight at the end of 2020. This may not derail the recovery, but it will restrain its momentum.

After slashing expenses in the first two quarters of 2020 in an attempt to mitigate slumping revenue, S&P 500 companies began hiring again as they reopened premises in the third quarter.

A new European Union ruling could pave the way for large food manufacturers and retailers to offer more insect-based products.

The number of weakest links (issuers rated 'B-' or lower by S&P Global Ratings with negative outlooks or ratings on CreditWatch with negative implications) decreased in the second half of 2020 as financing conditions continued to improve, even for the lowest-rated issuers, but were still elevated by historical standards.

U.S. retail sales recorded a third straight month of declines in December 2020 as a surge in coronavirus cases and renewed COVID-19 restrictions continued to weigh on consumers throughout the holiday season.

COVID has changed how Chinese consumers buy fresh food, especially in lower-tier cities. People are embracing bulk-buying online, with an association of shoppers working with an appointed leader to find items and take delivery. 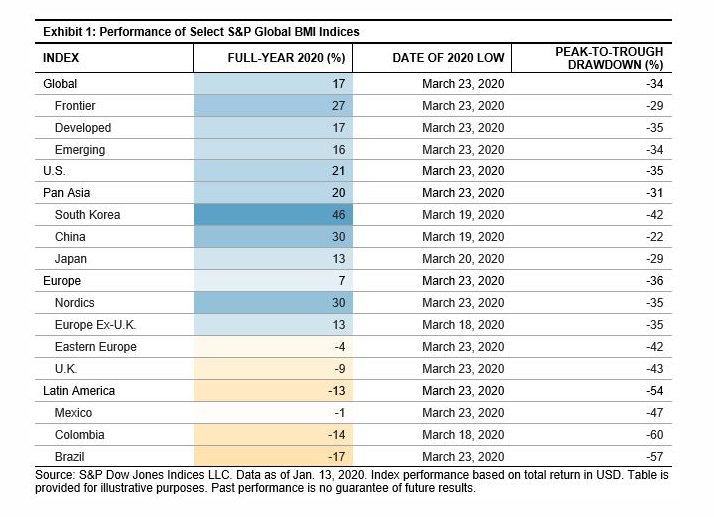 Early in 2020, global stock markets acted in concert during the sell-off, bottoming out around the world in late March.

For U.S. Finance Companies, Economic Rebound And Government Support Will Help Ease The Strain From COVID-19

S&P Global Ratings expects most rated U.S. finance companies in 2021 to face continued challenges related to COVID-19 and perhaps tighter regulation, but to generally navigate through such obstacles.

Up To 50% of Danish Retail Deposits Hit by Negative Rates, With More To Come

Paying a negative interest rate on your deposit account is becoming a reality for Mr. and Mrs. Denmark, as the average Danes are called in Danish. As people returned to work after the new year, there was a sharp spike in internet outages in the U.S. and worldwide.

Although broadly defined, the core premise of stakeholder capitalism is to find a balance and compromise in meeting the needs and serving the interests of all stakeholders: customers, employees, suppliers, communities, society, and the environment, as well as shareholders.

After a tumultuous 2020 for the global recycled plastics markets that saw production margins pressured and bearish virgin prices causing buyers to shun recycled plastics, the first half of 2021 may see a step change, at least in Europe and the US, in reaction to newly signed legislation that may provide an impetus to increased demand.

The private and public sectors are seeking to use the nation's nuclear power plants as engines of the emerging hydrogen economy.

In the final weeks of 2020, a wind turbine blade factory on the Isle of Wight, off the south coast of England, did what many other manufacturing facilities in the country were doing as the U.K. prepared to exit the EU's single market.

The UAE's juggling of energy transition and plans to eke out more profit from oil and gas projects has left it trying to secure a role in future crude demand scenarios while appeasing investors looking to combat climate change.

The International Energy Agency on Jan. 18 called on on companies, governments and regulators to take "urgent action" to cut methane emissions from the oil and gas sector, and warned that emissions could rebound from 2020 levels unless more methane leaks were addressed.

Infographic: A New Supercycle? Why Commodities Prices Are Surging In 2021 From LNG in Asia to scrap metal in Turkey and Brent crude, commodity prices assessed by S&P Global Platts have surged to new highs.

The International Energy Agency on Jan. 19 cut its estimate of the recovery in global oil demand this year, citing renewed COVID-19 lockdowns and the scale of the global vaccination challenge.

The physical oil market is walking a tightrope between the momentum spurred by the surprise Saudi Arabian cuts and the pressure of renewed lockdowns in many countries, which is keeping a lid on demand.

The fate of US refiner Citgo Petroleum remains in limbo following a federal court ruling late Jan. 14 that reaffirms the eventual auction of shares of Citgo's Venezuelan holding company.

The US Treasury sanctioned a series of European oil traders and crude tankers that allegedly helped a Mexican network work with Venezuela to evade US sanctions and move its crude oil to Asia and other parts of the world.