A sudden shakeup at the helm of CNN isn’t the only recent news to stir the media and entertainment world. A frenzy of mergers and acquisitions, alongside accelerated technological disruption, have been transforming the power dynamics of the industry.

“Media is whatever has the audience, right? And in today's environment, people's spending habits, where they get their information on what they want to purchase, what they want to buy—they're doing it online. The traditional television stations and the traditional magazines have become intermediary. Why go through an intermediary when you can go to the source?” Julia Haart, CEO and co-owner of the talent media company Elite World Group, told S&P Global Market Intelligence in a recent interview. “To me, technology is a tool; it is neither good nor bad, dangerous nor useful. It's how you utilize it … Whether people like it or not, innovation is part of life. So instead of being afraid of the new, we should figure out ways to utilize technology in the service of people. This gives people a voice.”

A craze for content that captures digital consumers’ attention has sent media companies into a consolidation and repositioning race. Technological disruption is the driving change agent for businesses, their competitive and industrial dynamics, and capital markets that fund growth. Media—including broadcast, cable, cinema, “over-the-top” (OTT), and telecom—is creating the culture of the future.

New media and entertainment M&A—namely Microsoft’s $68.7 billion purchase of video game company Activision, the telecommunication firm T-Mobile's bet on the ride-sharing ad network Octopus, and a potential merger between the DISH Network and DIRECTV—are set to further push technology and media into a new landscape.

“Major U.S. media companies will spend over $100 billion on content just in 2022,” S&P Global Ratings said in its 2022 top trends report for media and entertainment industry. “This record spending is driven by media and tech companies’ frenetic need to fuel growth in their video streaming services.”

Today is Thursday, February 3, 2022, and here is today’s essential intelligence.

Yield Curve Inversion Could Be False Alarm For U.S. Economy Amid COVID Upheavals 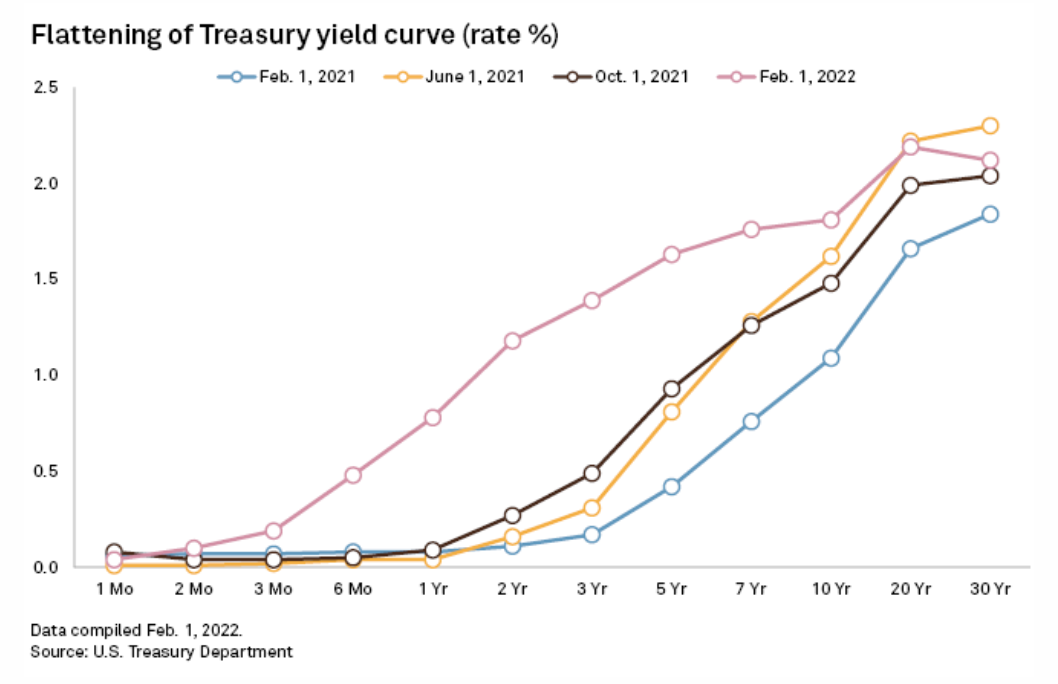 The U.S. Treasury market is nearing a key threshold that usually heralds a recession. The question for policy makers is whether this traditionally reliable indicator might be broken following a barrage of stimulus measures. Treasury yields are closing in on a so-called curve inversion, where long-term borrowing costs fall below those for shorter tenors. This market flip, which has preceded every recession in the last 50 years, is traditionally driven by investor pessimism about short-term growth prospects and expectations for an eventual economic recovery. 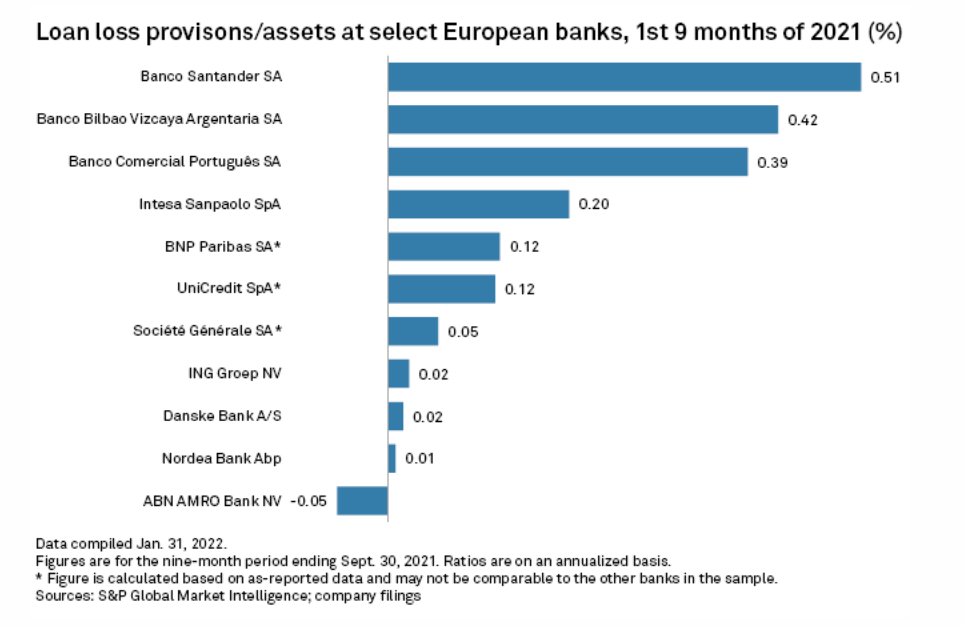 The European Central Bank is warning banks against the early release of loan loss provisions and wants to ensure the assumptions behind existing provisions prove accurate ahead of further releases. Banks added provisions—funds set aside to cover future nonperforming loans—at the beginning of the COVID-19 pandemic and some have started to release them. The provisions include post-model adjustments, also known as management overlays, which are assumptions of expected credit losses applied when a bank's modeling is deemed insufficient. 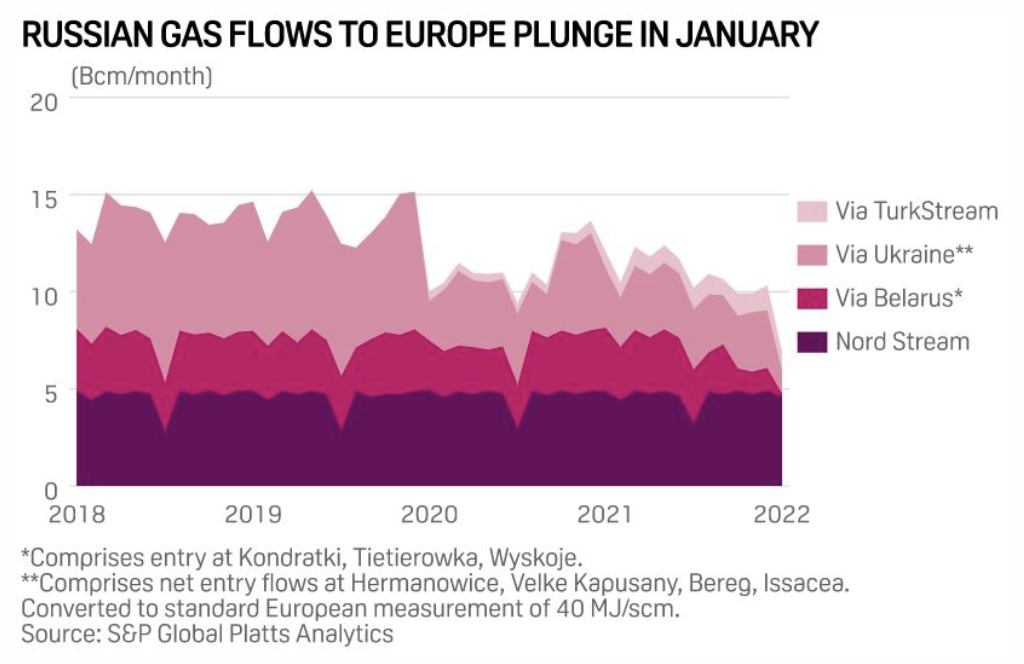 Russian gas flows to Europe fell further in the first month of 2022 having already been curtailed toward the end of last year, an analysis of flow data from S&P Global Platts Analytics showed Feb. 2. Russian pipeline exports to Europe in January via its four main corridors—Nord Stream, Yamal-Europe, Ukraine, and the TurkStream string to Europe—totaled just 7.1 Bcm, the data showed. Deliveries were down across the board, with even the first Nord Stream system flowing below capacity and came as tensions intensified between Moscow and the West over the build-up of Russian troops at the Ukrainian border. 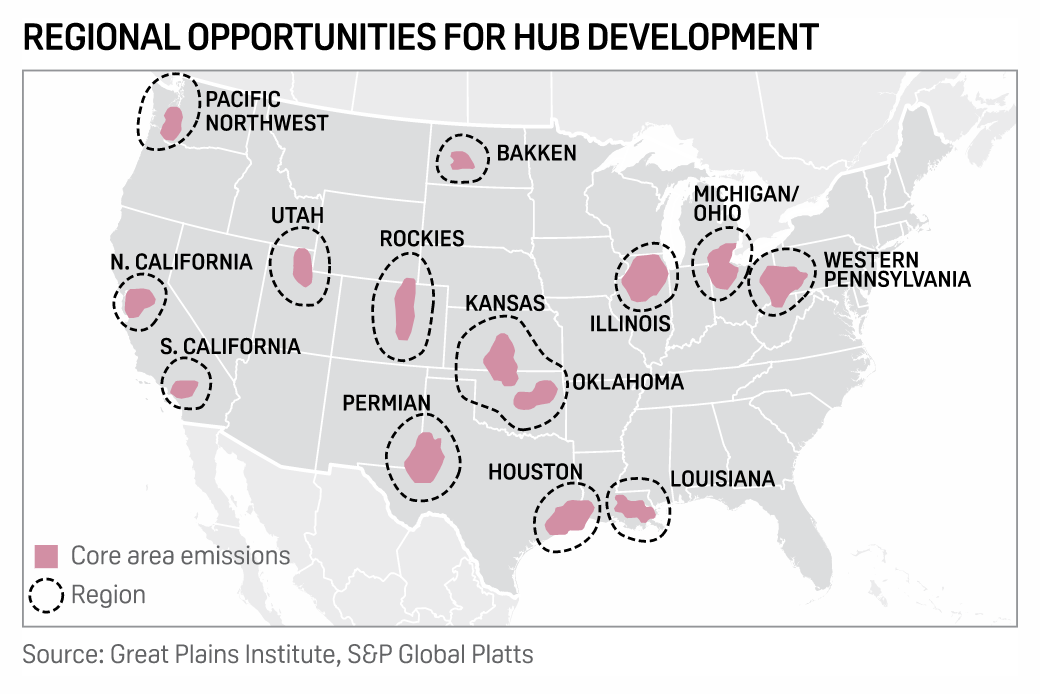 A nonpartisan energy research organization has identified 14 optimal locations for future hydrogen and carbon management hubs across the U.S., an early step before the Department of Energy begins doling out billions of dollars from the infrastructure bill for hub funding. According to the Great Plains Institute's Atlas of Carbon and Hydrogen Hubs for U.S. Decarbonization, released Feb. 1, the 14 most ideal locations were evaluated against a set of criteria that measured each region’s preexisting industrial and natural resources—criteria that roughly corresponds to how the Energy Department is expected to judge hub funding applications.

Fujairah Data: Oil Product Stockpiles Climb Across The Board After Crude Gains 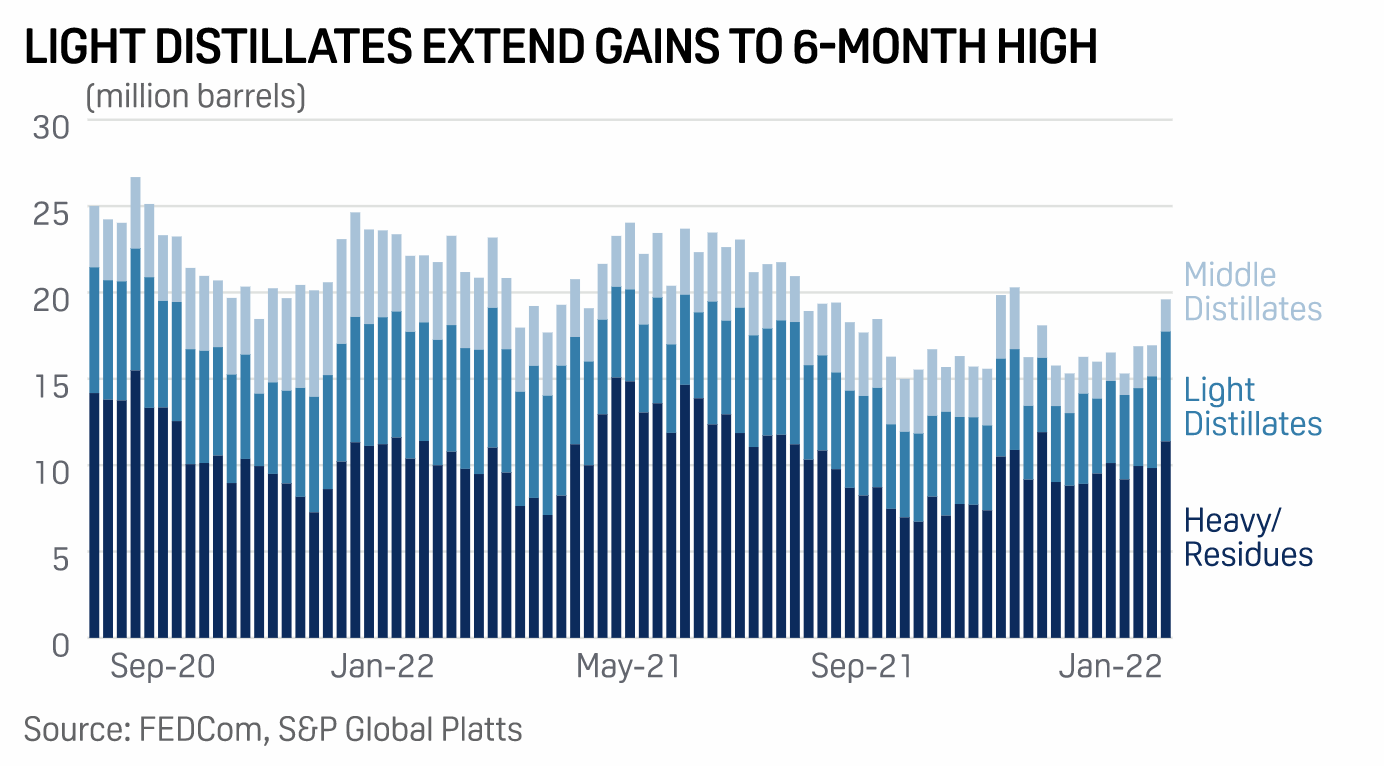 Oil product inventories at the UAE's Port of Fujairah climbed to an 11-week high with gains registered across all categories with buyers of marine bunker fuels holding back due to rising crude oil prices. Total stockpiles stood at 19.601 million barrels as of Jan. 31, up 16% from a week earlier and the most since Nov. 15, according to data from the Fujairah Oil Industry Zone shared exclusively with S&P Global Platts on Feb. 2. Gasoline, naphtha, and other light distillates led the gains, rising almost 20% to 6.362 million barrels, the most in six months.

Listen: Next In Tech | Episode 50: Infosec Spending Up, Again…

Attitudes about security are evolving, but expectations about spending continue strong. Dan Kennedy, the lead analyst on the Information Security VotE study, is back to discuss the results with host Eric Hanselman. There is greater awareness of the realities of cloud security, and organizations say that they’re buckling down to support remote work as a permanent change. It sounds like regulatory requirements are moving to expand their remit, but are they on target for things like open source?

—Listen and subscribe to Next in Tech, a podcast from S&P Market Intelligence