Beyond heightening domestic and geopolitical tensions and casting a shadow of uncertainty over the emerging market’s economic future, the military coup in Myanmar threatens international energy investment and trade.

A decade of transitional democratic rule ended Monday when the Asian nation’s army seized control of the government, declared a year-long state of emergency, and detained 75-year-old State Counsellor Aung San Suu Kyi and members of her National League for Democracy political party. The military ruled the country for roughly 50 years, from 1962 to 2011. Considered a democratic icon, Ms. Aung San Suu Kyi received the Nobel Peace Prize in 1991 and later was detained by Myanmar’s military for 15 years, from 1995 to 2011. Since becoming the premier of Myanmar in 2015, her international reputation has suffered due to her defense of the army’s persecution of the country’s Muslim Rohingya minority.

U.S. President Joe Biden called on Feb. 1 for a coordinated international response to the coup and threatened to impose sanctions on Myanmar to encourage the military to relinquish power. While advanced economies, including the U.S., Japan, and Australia, increased their energy and infrastructure investment in Myanmar during its years-long shift to democratic rule, the threat of international sanctions is likely to leave companies cautious, according to S&P Global Platts. Eastern countries like China and Thailand that had invested in the neighboring Asian country during the military’s rule are perceived as likely to tolerate the forcibly changing regime.

"Additional sanctions by U.S./Western countries could be deployed, especially if the military cracks down violently on protests; though sanctions are unlikely to force the military leadership to change course, especially as important trade/FDI [foreign direct investment] partners of Myanmar in East Asia are unlikely to take similar action,” Peter Mumford, the practice head for Southeast and South Asia at the geopolitical consultancy Eurasia Group, told S&P Global Platts. “The military is unlikely to take immediate, regressive steps on FDI, but reputational risks for Western companies involved in Myanmar will now increase further. In addition, the coup may result in a delay to planned economic reforms, including further energy and financial sector liberalization."

Outside of Myanmar’s domestic energy and infrastructure realm, the coup additionally threatens international supply chains. How military action or social unrest affects economic activity, whether sanctions are applied, and what brand value issues arise for buyers of Myanmar's exports will dictate the severity, according to Panjiva, part of S&P Global Market Intelligence.

“The position of regional partners for Myanmar is only just emerging. Panjiva data shows China represented 33% of Myanmar's exports in 2019, while the EU represented 23.2%, Thailand 15.4%, Japan 7.4% and the U.S. 4.4%,” Chris Rodgers, a senior global supply chain research analyst at Panjiva, said in a report this week. “The U.S. could have an outsize effect, compared to its share of Myanmar's exports, with sanctions, given control over the dollar-denominated global payments system. U.S. imports from Myanmar reached $1.06 billion in the 12 months to Nov. 30, 2020, from $245 million in 2016. Sanctions do not need to be particularly sophisticated to be effective, with just three product lines representing three-quarters of U.S. imports from Myanmar.”

Luggage maker Samsonite and apparel retailer L.L. Bean stand to be the most affected due to their outsize trade activity with Myanmar, according to Panjiva’s analysis.

Today is Wednesday, February 3, 2021, and here is today’s essential intelligence. 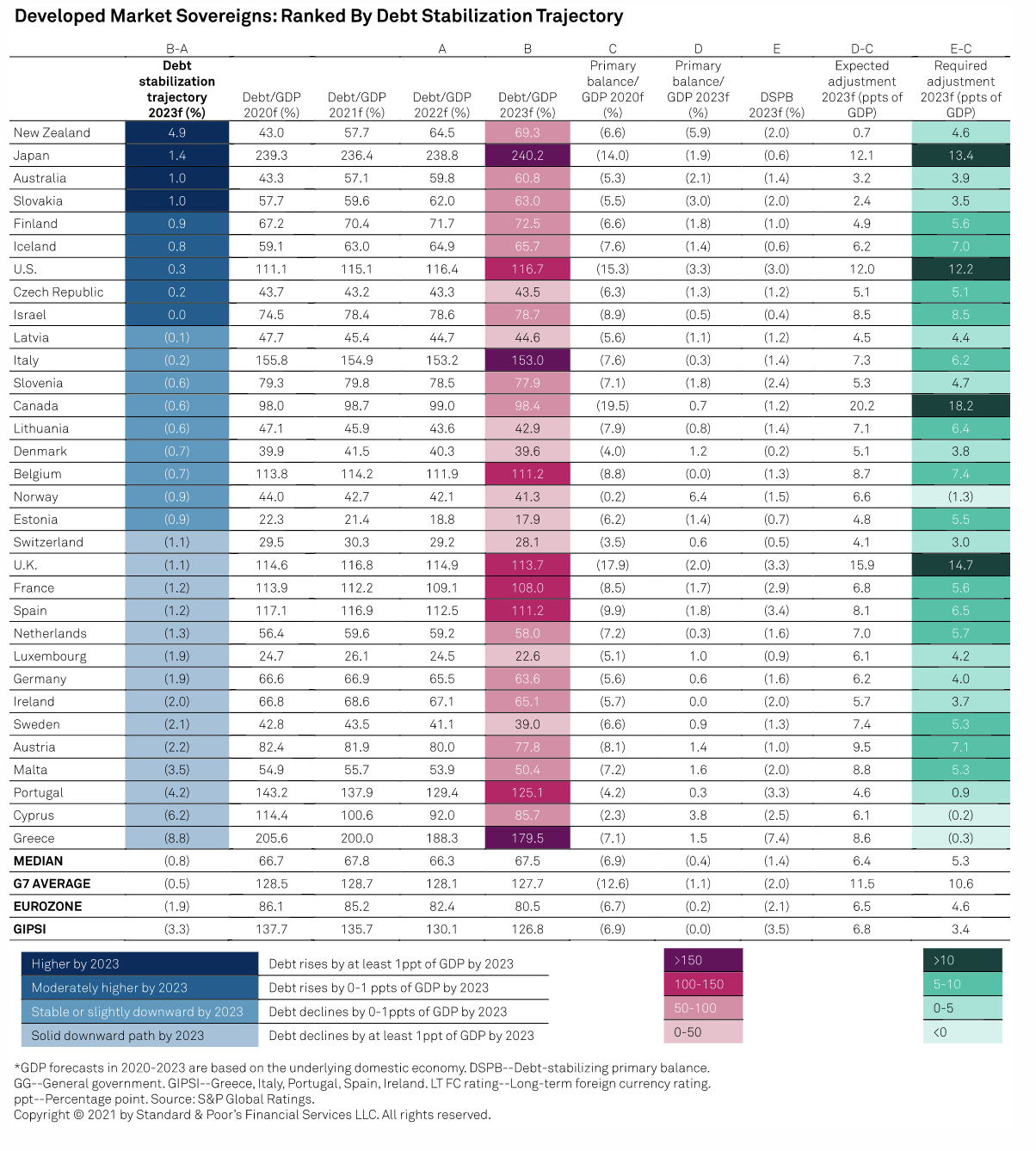 Over two-thirds of developed and emerging sovereigns should manage to either stabilize debt to GDP or put it on a downward path by 2023, though from historically high levels. That still leaves around one-third of governments facing rising debt beyond the outer year of our forecast horizon.

The number of U.S. corporate upgrades rose by 51% to 65 in the fourth quarter, reaching the highest level since second-quarter 2018, as vaccine approvals and fiscal stimulus brightened prospects for 2021.

U.S. Treasuries Sold Off with Rising Breakeven Inflation in January

The year 2021 started with a continuous sell-off in the U.S. Treasury bond market. Starting on the second trading day of the year, yield on the 10-year U.S. Treasury Bond rose for five consecutive trading days by 23 bps until Jan. 12, 2021, when strong auction results for the 10-year note pulled the yield back from its high. In the second half of January, Treasuries’ yield continued to trade lower before it ticked up by the end of the month and found itself in a new range safely above 1%. 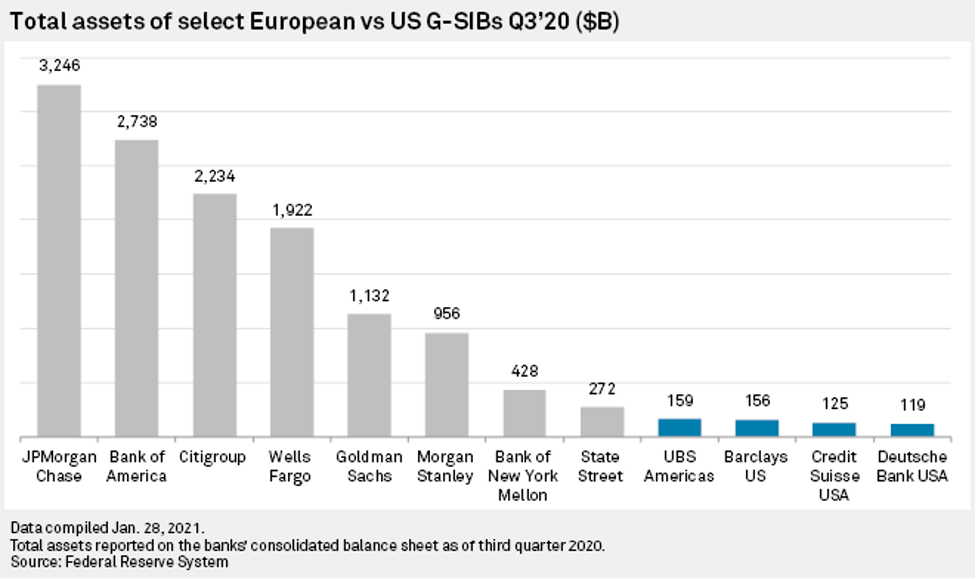 Chinese banks are likely to see credit growth continuing to slow in 2021, as the government steps up measures to rein in mortgage lending and consumer loans and may at some point start to wind down COVID-19 stimulus measures, analysts say. 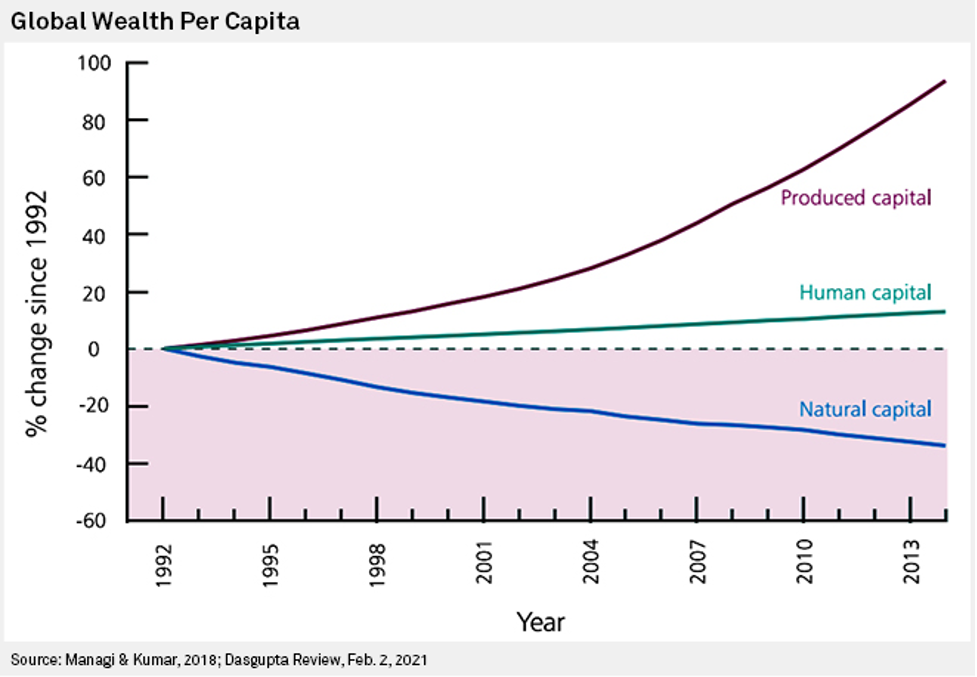 A new U.K. government report highlights the growing financial risks corporations face as a result of a relentless depletion of earth's natural resources, an issue that so far has flown below the ESG radar of most businesses.

Hydrogen To Become 'Material' Part of BP Business Only In 2030s: CEO

Hydrogen will only become a "material" part of BP's business from 2030 onward, CEO Bernard Looney said Feb. 2. BP has committed to becoming an integrated energy major with less focus on traditional oil and gas production. Hydrogen, Looney said on a Q4 earnings call with analysts, would be an important fuel for the future, "but it's not something that's going to happen overnight in terms of being a material part of BP's portfolio.

With the surge in demand for renewable energy, companies in the clean energy space are poised for similar growth. How does one capture the theme and track the performance of clean energy companies? OPEC+ ministers will convene Feb. 3 for a monitoring committee meeting that could provide the first signs of whether festering divisions will re-emerge when the alliance must decide how much crude oil to pump after the first quarter.

ExxonMobil expects 2021 capital expenditures to decline 11-25% from 2020 levels as the company focuses on projects with lower breakevens amid an uncertain price environment, company executives said during a fourth-quarter earnings call Feb. 2.

Listen: Where Does The Global Natural Gas Market Go From Its Historic Highs?

Ira Joseph of S&P Global Platts Analytics and Ryan Ouwerkerk, manager of Americas natural gas pricing for S&P Global Platts, discuss key market fundamentals following the historic JKM price movements of early January and the trickle down impact on TTF, and what's next for the global gas market as it moves into the latter part of winter.