As the world watches Russia and Ukraine with anxious anticipation, fears of war at worst and the prospect of longstanding tensions at least are roiling financial markets.

The latest developments in the dispute between Moscow and Kyiv in the past few days have propelled the international community into high alert. Russian President Vladimir Putin’s recognition of Donetsk and Luhansk, two territories in eastern Ukraine, as independent was characterized as “a violation of the territorial integrity and sovereignty of Ukraine” by U.N. Secretary General António Guterres, among other global leaders. Russian military deployed into eastern Ukraine yesterday. U.S. President Joe Biden condemned Russia’s actions as “a flagrant violation of international law” and the beginning of “a Russian invasion of Ukraine”—and alongside European, British, and other NATO allies leveled economic sanctions against Russia.

Markets are bracing for the implications of the escalating tensions, the heightened risk of cyber attacks, and corresponding sanctions for geopolitics, economic and credit conditions, energy relationships, agriculture prices, and commodities trade.

The sanctions imposed on Russia targeted the country’s sovereign debt, two biggest banks, oligarchs and their families, commercial shipping vessels, and Germany’s halting the certification of the Nord Stream 2 gas pipeline. In response to the news, the S&P 500 benchmark equities index closed Feb. 22 in correction territory (down more than 10% from a recent peak), and oil prices rose to more than $96 a barrel. While S&P Global Ratings sees the potential for strict sanctions on Russia to spur broader consequences in the form of higher commodity prices and a temporary energy price shock in Europe that could worsen inflationary pressures, S&P Global Platts Analytics projects that those stricter sanctions that global leaders have warned are to come will depend on what next occurs between Russia and Ukraine.

“The escalation of tensions between Russia and the West over Ukraine and potentially retaliatory sanctions could have a destabilizing effect on Russia's economy. However, in our base case scenario, we expect those to be initially manageable given Russia's conservative policy framework and its strong fiscal and external balance sheets,” S&P Global Ratings said in a recent report. “Nevertheless, a more severe series of events, in a worst-case scenario, could result in harsher sanctions to Russia's main exports and a global energy price shock. The geopolitical stakes and the likelihood that they will persist suggests that strong sanctions on Russia will remain a risk undermining its long-term growth prospects.”

"Such blacklisting [of Russia’s banks] could have a devastating impact on the Russian economy," Caroline Brown, a partner at the law firm Crowell & Moring who advises on economic sanctions compliance and enforcement, told S&P Global Market Intelligence. Such sanctions would affect everyone depending "on transactions through those financial institutions, including Russians and Russian companies.”

"It is a question of watching with bated breath, as any sanctions levelled on Russia will have a ripple-through effect on trading efforts throughout the entire region," Maurice Thompson, a Melbourne-based partner at the law firm Clyde & Co, told S&P Global Platts. "Some [commodities traders] will have adequate flexibility and protections in their contracts and others will not. What they all should be doing, however, is reviewing their potential exposure now.”

Russia’s unique position as a major energy provider to the global economy—exporting oil and petroleum products to the U.S. and natural gas to Europe, alongside its marriage with the OPEC+ coalition—has been intensified against the sanctions backdrop. The crisis with Ukraine has contributed to already-high oil prices pushing up even further, prompting the White House to contemplate another globally coordinated strategic petroleum reserve release in efforts of tempering the surge. Additionally, the sanctions against and stopping of Nord Stream 2 has forced the European Union and market participants in the region to reconsider its energy security and supply of natural gas and liquefied natural gas.

Today is Wednesday, February 23, 2022, and here is today’s essential intelligence.

Cyber Threat Brief: How Worried Should We Be About Cyber Attacks On Ukraine? 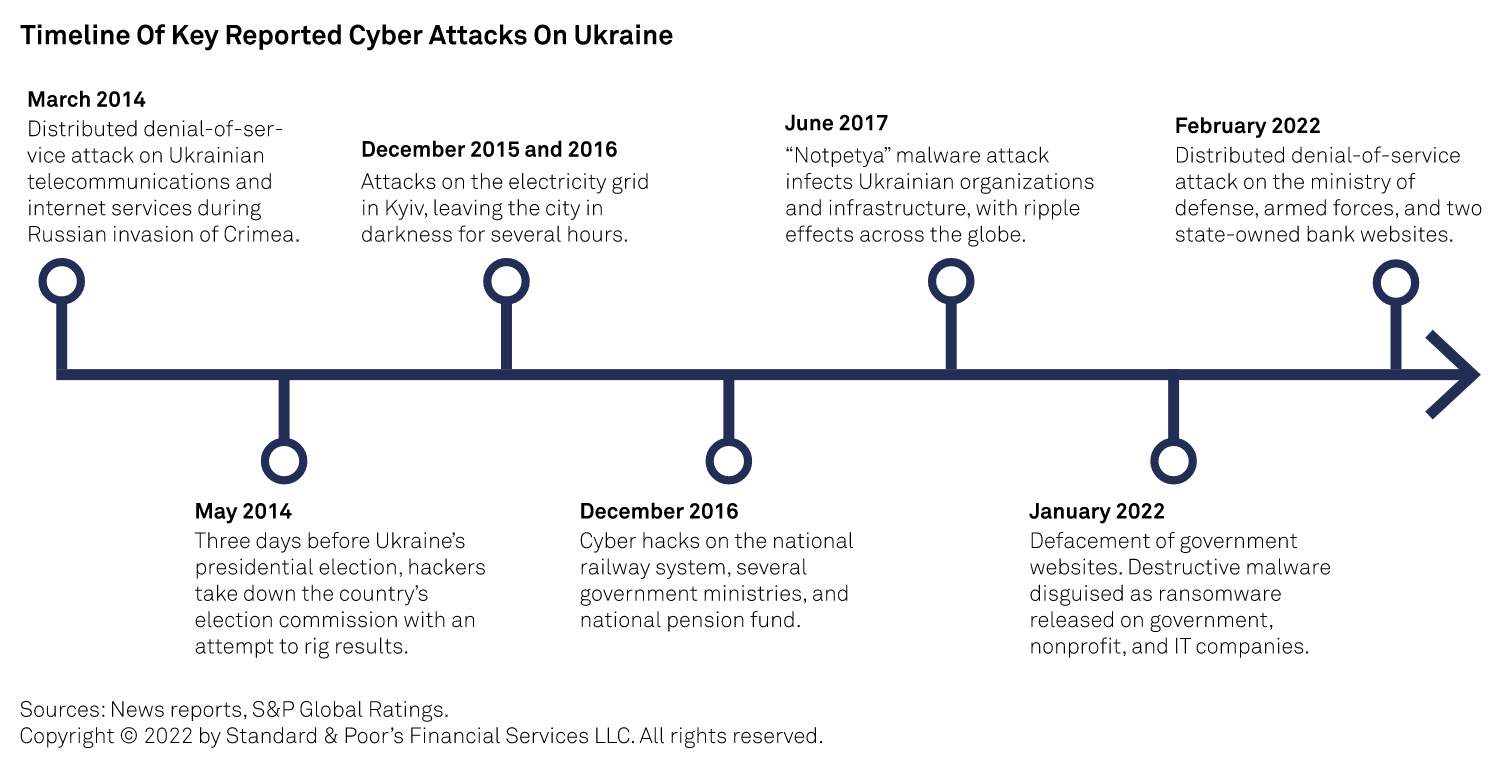 There is a heightened risk of cyber attacks on Ukraine amid escalating tensions with Russia, which could create knock-on effects for corporations, governments, and other parties in the region and beyond. The economic impact from such an attack for entities could exceed the $10 billion estimated from the 2017 "NotPetya" attack, given increased interconnectedness and digitalization. S&P Global Ratings considers that issuers with weaker cyber governance and risk management are more exposed to rating implications. Moreover, S&P Global Ratings is monitoring potential credit impact of cyber attacks on insurers and policyholders, given still-ambiguous "act of war" exclusion clauses in insurance policies. 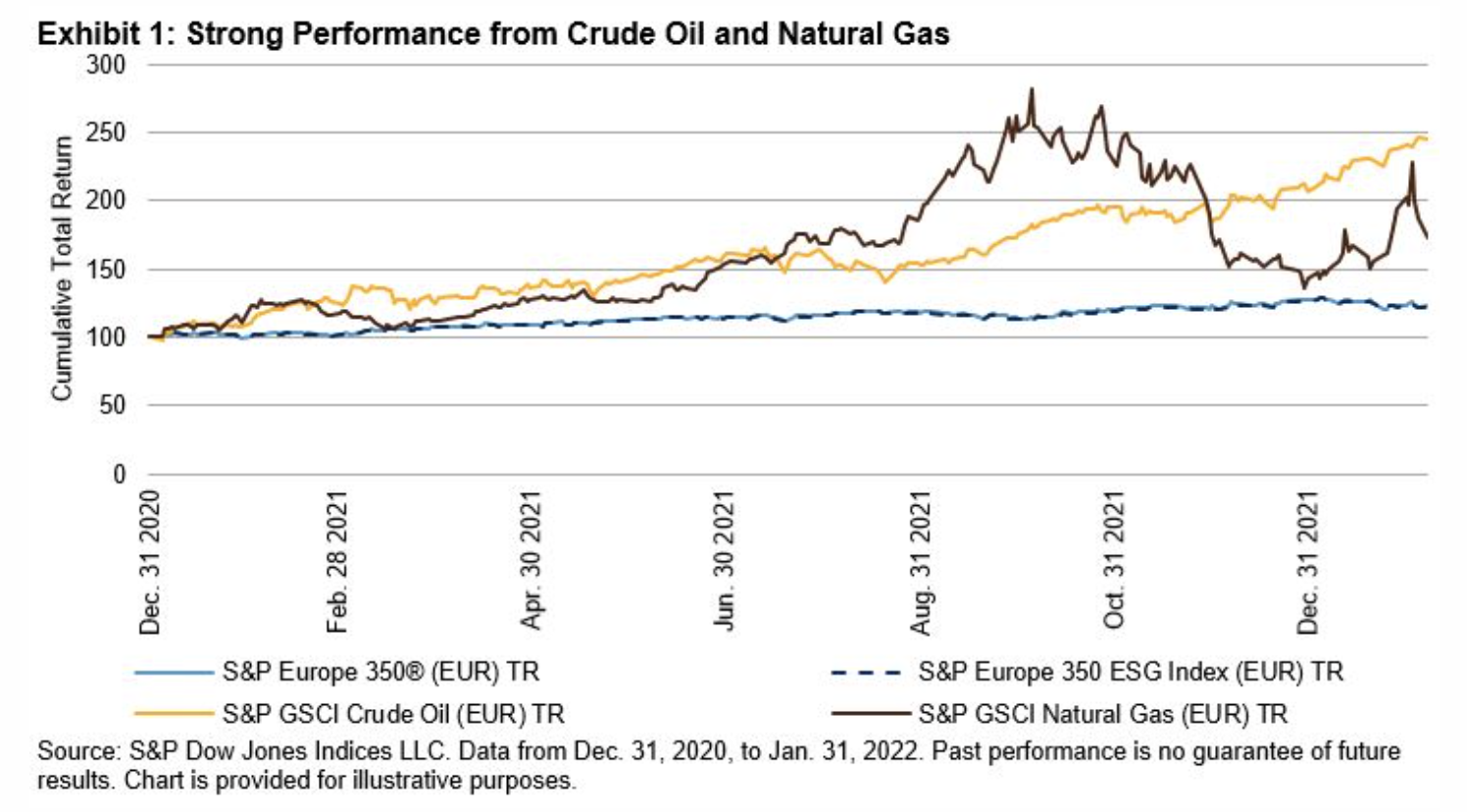 Commodities crushed it in 2021, with stretched supply chains a driving factor. The strong performance didn’t stop as 2022 began. In this blog, S&P Dow Jones Indices specifically looks at crude oil and natural gas, which have outperformed the European equity market by some distance since the start of 2021, and what this can mean for European ESG strategies. Given the environmentally unfriendly nature of these fossil fuel-based energy sources, it would make sense for an ESG strategy to have less exposure to energy companies.

The International Maritime Organization has set its sights on slashing the global shipping industry's total emissions in half by 2050, with an interim target of cutting the carbon intensity of all ships by at least 40% by 2030. S&P Global Platts Analytics expects momentum to build for ammonia-fueled ships as companies strive to meet these ambitious goals. Senior editor Jasmin Melvin spoke with Carbon Neutral Consulting President Steve Crolius about potential applications for ammonia in a sustainable energy economy and what is needed for the fuel to take off within the maritime industry.

Fuel For Thought: OPEC-Russia Marriage Faces The Test Of An Oil Market That Demands More 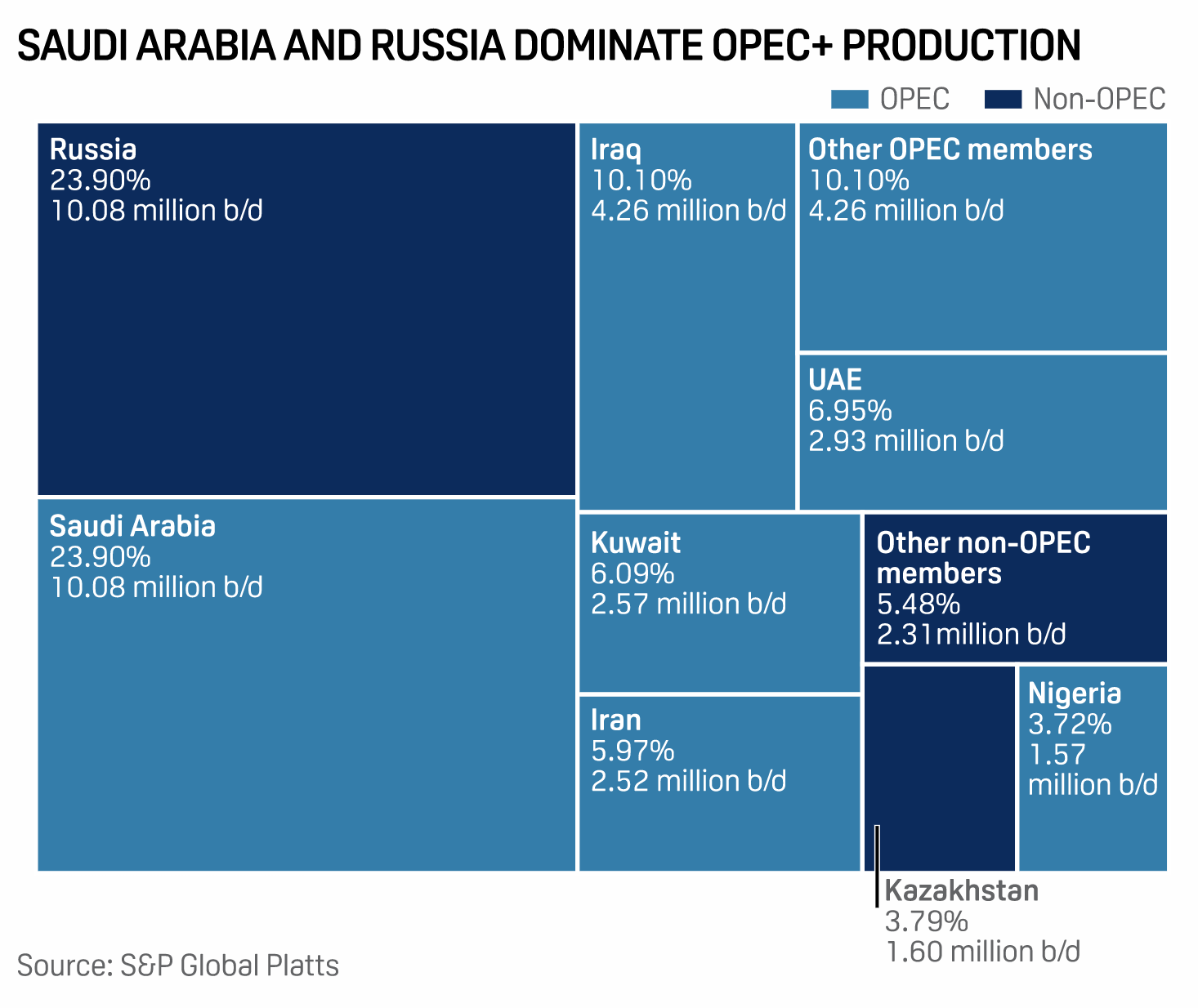 OPEC's five-year alliance with Russia is on geopolitical tenterhooks, as the oil producing bloc warily eyes the Ukraine crisis and the threat of U.S. sanctions, while crude prices hit eight-year highs. But beyond the geopolitics, oil market realities may soon force a reckoning of the relationship anyway. With global oil demand on pace to climb back to pre-pandemic levels in the coming months, OPEC and its Russia-led partners are running out of their ability to keep pace with crude production.

Listen: Next In Tech | Episode 53: Interest In Interest Rates

Interest rates are top of mind in tech, influencing markets, and M&A activity. Research analyst Malav Parekh joins host Eric Hanselman to look at the hard questions that concerns about interest rates are creating and to discuss the data from the latest Voice of the Customer Macroeconomic Outlook study. Translating study results is challenging at the best of times, but nothing’s normal now, and working out the impacts is not going to be easy.