Federal Reserve Chairman Jerome Powell indicated yesterday that central bank policymakers are likely to consider at their Dec. 14-15 Federal Open Market Committee meeting whether to unwind the economic and market aid programs implemented during the pandemic sooner than anticipated.

“The Fed's even tighter monetary policy will eventually tame price readings, but not without economic growth slowing as well,” S&P Global Economics Chief U.S. Economist Beth Ann Bovino said in research this week. “How sharp a slowdown depends on how big an inflation battle the Fed must fight.”

Nominated last week by the Biden Administration for a second term, Mr. Powell’s comments to the Senate Banking Committee came as the world’s largest economy confronts landscape of thorny conditions—with inflation reaching the highest level in three decades, joblessness still pervasive across the country, and the new Omicron COVID-19 variant threatening to dismantle the return to normalcy. Due to persistent supply chain pressures, S&P Global Economics lowered its growth forecast for the U.S. economy to 5.5% this year, from its previous outlook of 5.7%, but still projects GDP to reach a 37-year high in 2021.

“At this point, the economy is very strong, and inflationary pressures are high,” Mr. Powell said. “It is therefore appropriate in my view to consider wrapping up the taper of our asset purchases, which we actually announced at our November meeting, perhaps a few months sooner.”

Centering prolonged and higher inflation as a key issue for the Fed, the central bank’s leader moved away from describing current inflation as “transitory,” suggesting that “it’s probably a good time to retire that word” and adding that inflation is likely to “move down significantly over the next year as supply and demand imbalances abate.”

While inflation remains a force in driving bond yields, "the problem is that market participants are split about how high it is going and how long it will last," Kathy Jones, managing director and chief fixed-income strategist for the Schwab Center for Financial Research, told S&P Global Market Intelligence.

Without any modifications to its planned schedule, the Fed will finish its asset-purchase program in mid-2022 under a strategy announced last month to slow buying by $15 billion per month. Under this scenario, S&P Global Economics expects the Fed to shrink its monthly purchases by a greater amount next year and ultimately reach zero three months earlier in 2022—followed by its first interest-rate hike later in the year. Inflation would likely reach the Fed's 2% target by late 2023 with these conditions in place.

Equities markets closed markedly lower yesterday following the news of Chairman Powell’s comments. In the future, changes to the Fed’s balance sheet could have broader effects. Recent Bank of America research estimates that changes to the Fed's balance sheet explain more than 50% of market returns since 2010. Additionally, the central bank’s tapering of economic support could send the dollar soaring and hurt emerging market economies, according to S&P Dow Jones Indices.

“As the Fed gets ready yet again to ‘taper,’ the U.S. dollar has entered another round of strengthening. Since the start of June 2021, the Dow Jones FXCM Dollar Index, which is designed to measure the broad performance of the U.S. dollar against four developed market currencies, has risen 4%,” Benedek Vörös, director of index investment strategy at S&P Dow Jones Indices, said in a commentary yesterday. “Time and again, a bout of U.S. dollar strengthening has triggered turmoil in emerging economies that predominantly borrow abroad in foreign currencies, usually U.S. dollars. Thus, a strengthening U.S. dollar has increased emerging markets’ debt burden, depressing consumption and economic growth, and consequently leading to dismal domestic equity market returns.”

Today is Wednesday, December 1, 2021, and here is today’s essential intelligence.

Economic Research: Asia-Pacific: Ghosts Of COVID Past Hover Over 2022

COVID policies in Asia-Pacific have put regional economies on a weaker recovery path than the rest of the world. While the region was highly successful in curbing the spread of the virus early in the pandemic, it was slow to vaccinate, and is now only gradually reopening borders and relaxing mobility.

Since September, two notable dynamics have changed for the Latin American economy. First, inflation has been higher and less transitory than expected, in large part due to the recent and rapid increase in energy prices. In turn, inflation expectations have risen, which means central banks in the region will speed up monetary tighten to anchor inflation expectations. Second, supply-chain bottlenecks have disrupted manufacturing production more than anticipated.

For now, the U.K. economy continues to recover at a rather fast pace. Driven mainly by household consumption, it is set to regain pre-pandemic levels sometime in the first quarter of next year. From trough to peak, it will have taken just under two years—much faster than, for example, the four long years it took the economy to recover lost ground after the financial crisis of the past decade.

Australian state and territory government budgets are on a path to recovery after the initial COVID-19 shock. S&P Global Ratings expects the states' fiscal positions will benefit from the continued rollout of vaccines and the associated upswing in the national economy as it opens. The reopening of international borders will also help as migrants, workers, students, and tourists gradually return. 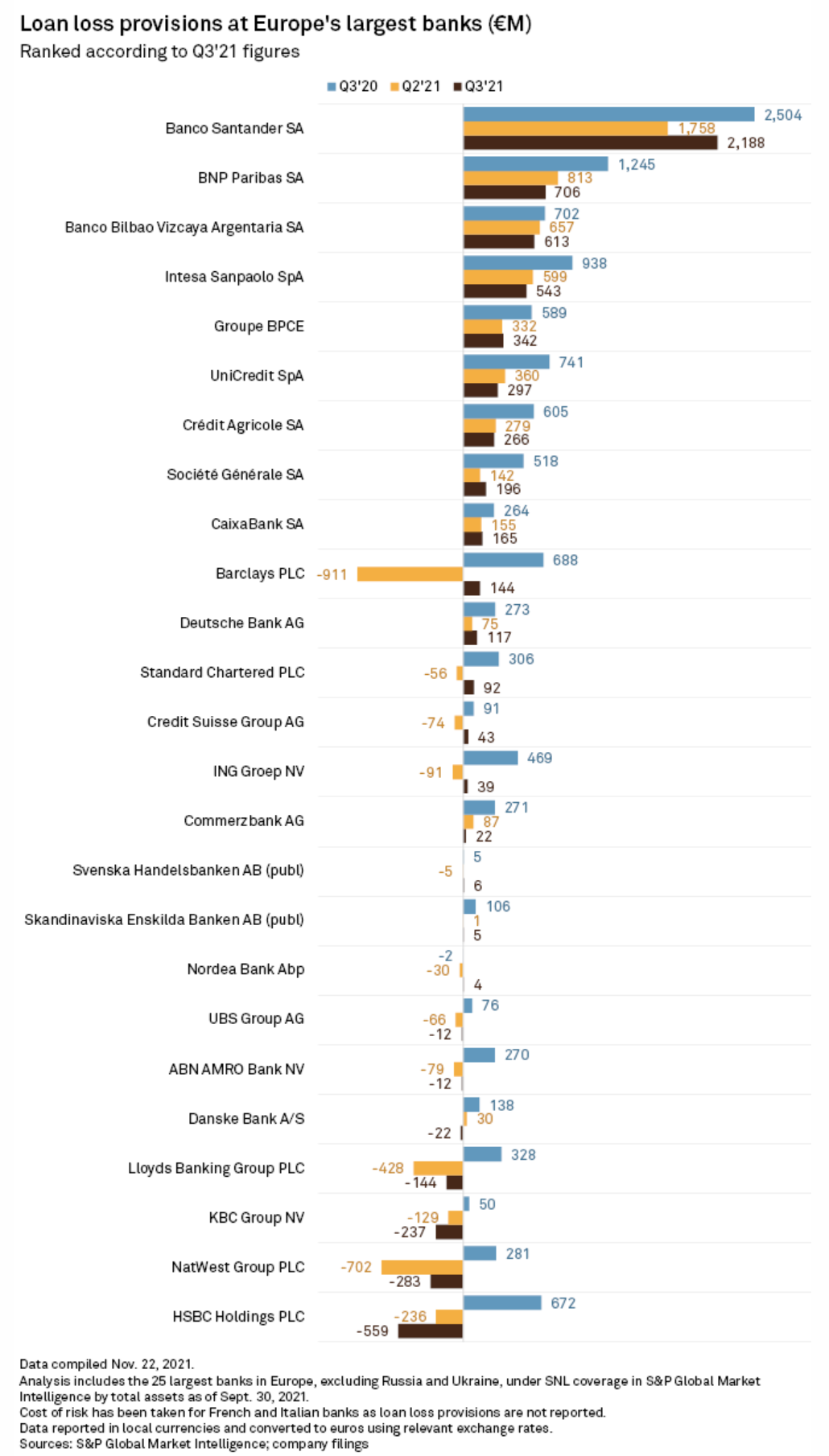 The interest of private equity firms in European financial institutions has been touted as a driver for M&A in the sector, but transaction volumes in 2021 are on course to slip to their lowest level in several years, S&P Global Market Intelligence data shows.

The target year for Germany to become climate neutral has shifted to 2045, five years earlier than the EU's deadline of 2050. This follows a revision to the country's Climate Change Act, which focuses on national emissions: direct, indirect from energy use, and those outside a company's control if they occur within Germany.

France 'Not Doing Enough' To Meet Its Energy And Climate Targets: IEA

France is not acting fast enough to meet its energy and climate targets, the International Energy Agency said in a policy review report Nov. 30. In particular, the country's electricity market needed a clearer policy strategy, it said. Half of France's renewables output came from hydro plants built decades ago, the report said, noting the country needed "more sustained and consistent policies" to accelerate new additions of solar and wind capacity.

What's It Worth? The Rise Of Electric Vehicles In European Auto ABS

Despite a recent slowdown in global auto sales due to the semiconductor shortage and other supply issues related to COVID-19, S&P Global Ratings expects electrification to accelerate. S&P Global Ratings forecasts EVs will make up 7%-10% of global light vehicle sales in 2021 and 15%-20% in 2025, with Europe leading the way.

The recently launched First Movers Coalition of companies joining to build demand for technologies to cut emissions from hard-to-abate sectors will need to be paired with corresponding efforts to build supply and develop associated infrastructure, a U.S. official said Nov. 30.

The reassessment includes making room for gas in the energy transition as a bridging fuel with half the emissions footprint, as well as keeping coal plants as back-up power sources instead of complete decommissioning, until technologies and costs to solve the intermittency of renewables meet a certain threshold. 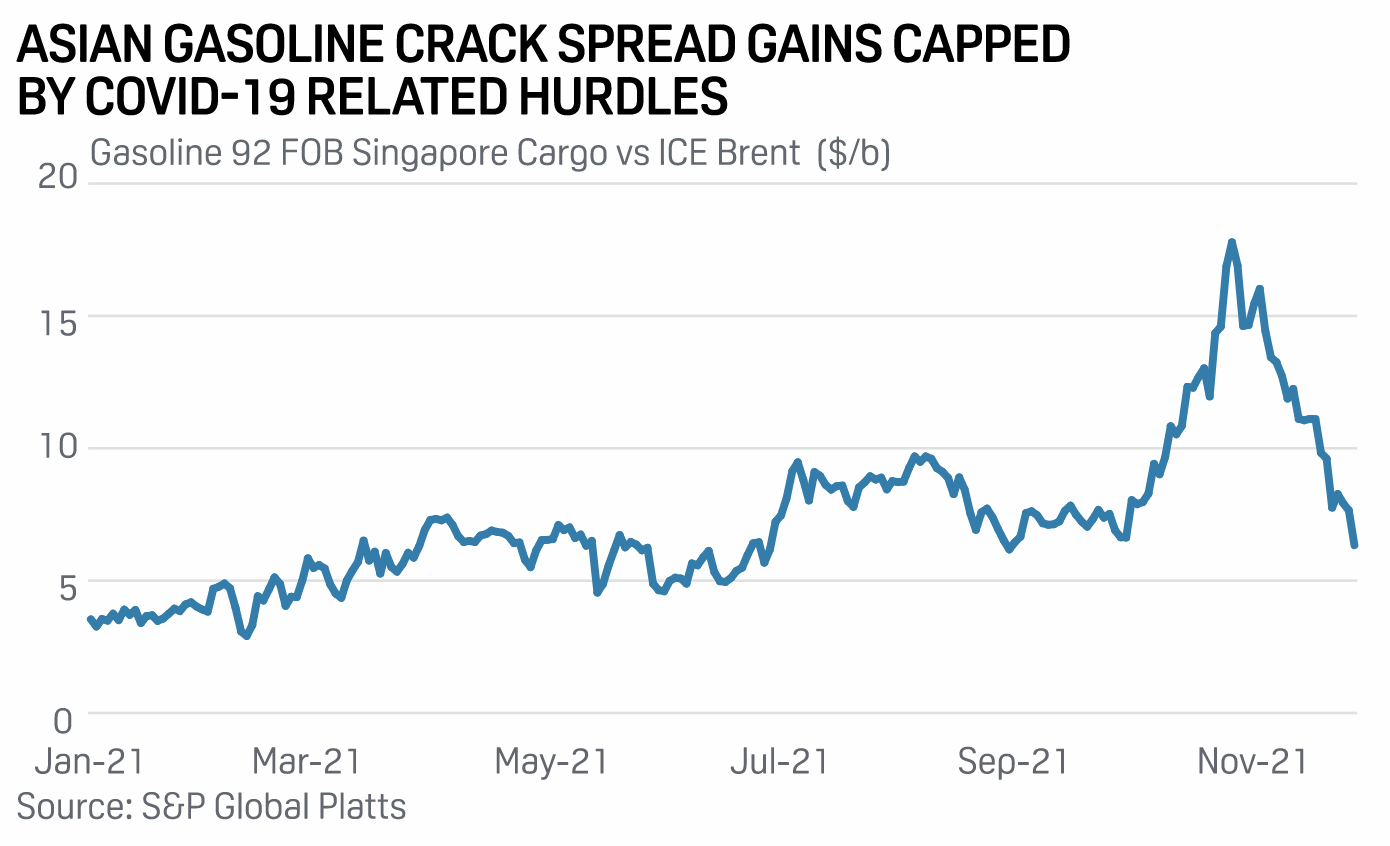 The oil market is drastically trying to assess the impact of the COVID-19 omicron variant, which threatens to derail the demand recovery. Analysts are still mulling whether to revise their 2021 and 2022 demand estimates as many insist it is too early to make any dramatic changes to their outlooks. But the futures market is already spooked by the news, with oil prices having plunged more than $13/b since news of the new coronavirus mutation.

OPEC will begin its first formal discussions over its next secretary general when it meets Dec. 1, with heavyweight Saudi Arabia thought to back a change as the producer group struggles to contain a volatile oil market and withstand energy transition pressures.

The Biden administration's proposed reforms to federal oil and gas leasing could raise costs to drillers and potentially shrink available acreage, but the expected production impact continues to be minor, analysts said Nov. 29. The U.S. Interior Department issued an 18-page report laying out its goals for overhauling the leasing program with the aim of providing a "fair return" to U.S. taxpayers, in line with past recommendations by the Government Accountability Office and Interior's Office of Inspector General.

Interview: Bahrain In Talks With IOCs To Develop New Oil Find In Second Half Of Decade

Bahrain is in talks with international oil companies to help develop the Khalij al-Bahrain oil find, a project that is expected to start in the second half of this decade due to the complexity of the structure and the need for technology and financing, an official told S&P Global Platts Nov. 30.

After navigating choppy waters for more than a year now, market sources fear that despite some signs of a rebalancing in demand and supply, the container industry faces another challenging year in 2022 — with port congestion issues set to remain a major pain point.