Both the U.S. and the eurozone suffered their most debilitating post-World War II economic contractions in the second quarter. The U.S. is unlikely to rebound as quickly or meaningfully as its European counterparts due to its dramatically rising coronavirus case total.

U.S. GDP tumbled 9.5% in the three-month period from April to June, according to data released last week by the Department of Commerce—and Europe’s decline was even starker. Eurozone GDP plummeted 12.1% in the second quarter, and the EU’s shrank 11.9%, according to July 31 Eurostat data, compared to first-quarter declines of 3.6% and 3.2% respectively.

Since the start of the pandemic, global leaders have linked nations’ economic health to their populations’ public health. Authorities in both the U.S. and Europe have expressed concern that young people disregarding social distancing and other coronavirus-containment measures are disproportionately worsening the situation across their countries. Europe’s overall ability to control the spread of the coronavirus may position its countries to grow economically sooner if the region can combat new surges of cases appearing in the summer travel months as restrictions have relaxed. The U.S. reported more than 1.9 million new infections in July, according to Johns Hopkins University.

The “new phase” of the U.S.’s outbreak is “extraordinarily widespread” across both rural and urban areas due to “super-spreading events,” the House Coronavirus Task Force Coordinator Dr. Deborah Birx said in an Aug. 2 CNN interview.

“If we were to lock down hard for a month or six weeks, we could get the case count down so that our testing and our contact tracing was actually enough to control it,” Federal Reserve Bank of Minneapolis President Neel Kashkari said in an Aug. 2 CBS News interview. “If we don’t do that, and we just have this raging virus spread throughout the country with flare-ups and local lockdowns for the next year or two, which is entirely possible, we’re going to see many, many more business bankruptcies.”

“Amid the gloom, there are some positive aspects of the European response to COVID that could have positive credit implications. G20 European countries have undertaken some of the largest fiscal responses in relation to GDP via loans, equity, guarantees, additional spending, and foregone revenue,” S&P Global Ratings said in its European Corporate Credit Mid-Year Outlook. “The consequence of this has been to soften the blow of unemployment, certainly relative to the U.S. which, while undertaking considerable spending, has not seen anywhere near the same level of loans, equity injections, or guarantees enacted.”

Additionally, Europe’s corporate default rate is likely rise to 8.5%, lower than their outlook of 12.5% for the U.S. This in part reflects lower exposure to oil companies, and primarily Europe’s control over the contagion and speedy and supportive policy response. Risks still remain heavily tilted to the downside.

“Whether this differential persists in the face of partially reinstated lockdowns in some European regions and a fragile summer tourism season remains to be seen,” S&P Global Ratings said, highlighting that small- and medium-sized enterprises appear particularly vulnerable. “Swift government support across Europe has helped many businesses to continue to function and may ultimately soften the blow in terms of defaults.”

Today is Monday, August 3, 2020, and here is today’s essential intelligence. 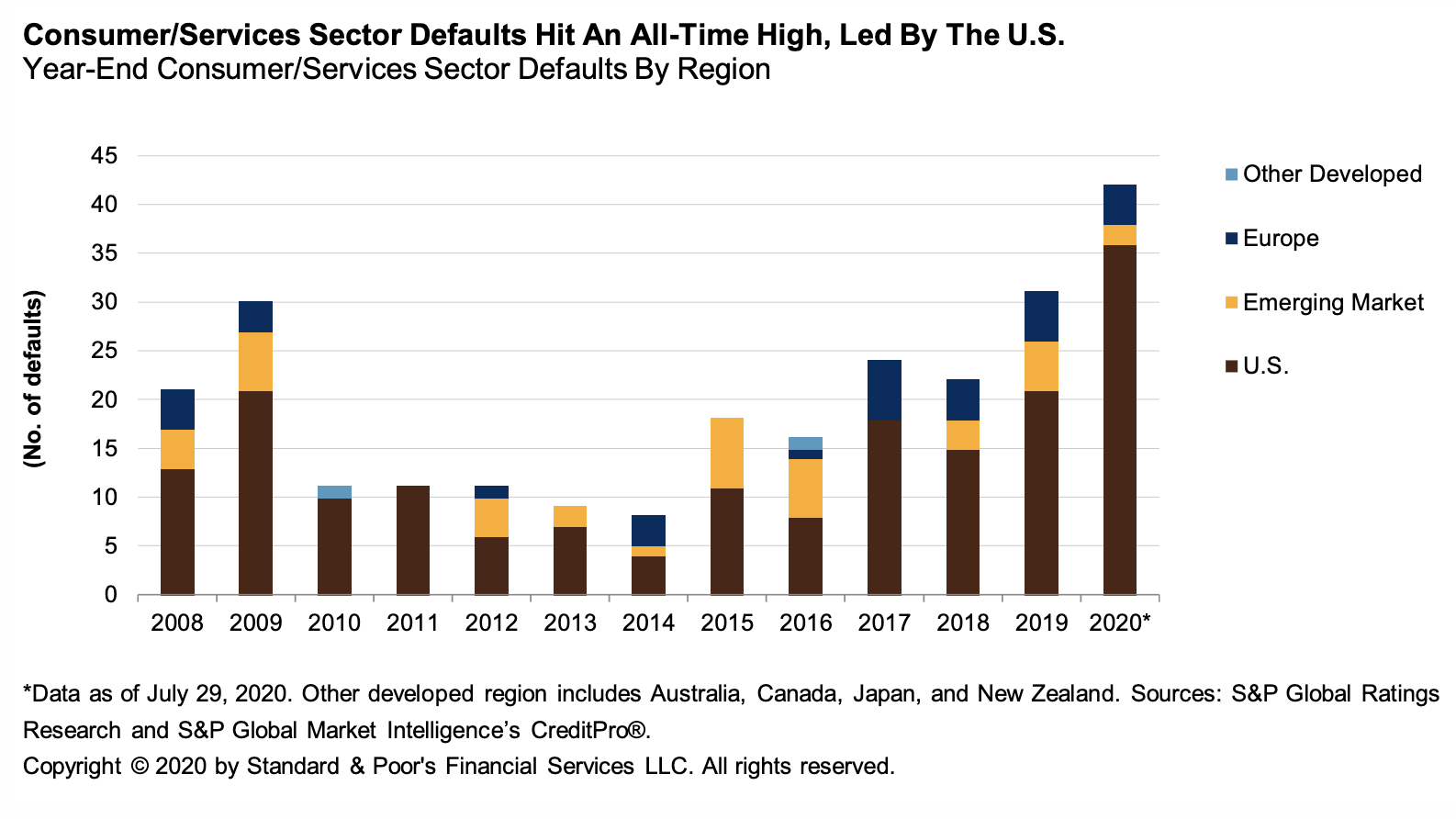 Some aspects of this recession are following normal tropes, others less so. Cost pressures, accelerated disruption, winning-and-losing product mixes, and renewed country differences are all part of the risk overlay COVID-19 has added to credit risk. Swift fiscal, monetary, and loan support have all served to soften the blow and keep financial markets functioning. This has enabled companies to top-up cash balances to help endure the downturn. But the pace of cash burn remains critical, especially if the crisis persists. Solvency concerns will then become more acute. Weaker cash flows and higher debts, on top of already-high debt levels, may well lead to a persistent debt hangover. The winding down of support and stimulus schemes will present a significant challenge in the months ahead and fragile confidence could unravel.

Neiman Marcus Group Inc. has reached a settlement with unsecured creditors on fraudulent conveyance claims arising out of the company’s MyTheresa transactions, according to a series of court filings in the company’s Chapter 11 case. The settlement will allow a hearing on approval of the company’s proposed disclosure statement, which was scheduled for the afternoon of July 30 in bankruptcy court in Houston, Texas, to proceed. The company amended its request, however, to set a voting deadline for creditors of Aug. 31, and a confirmation hearing date of Sept. 4, slightly delayed from its original motion. 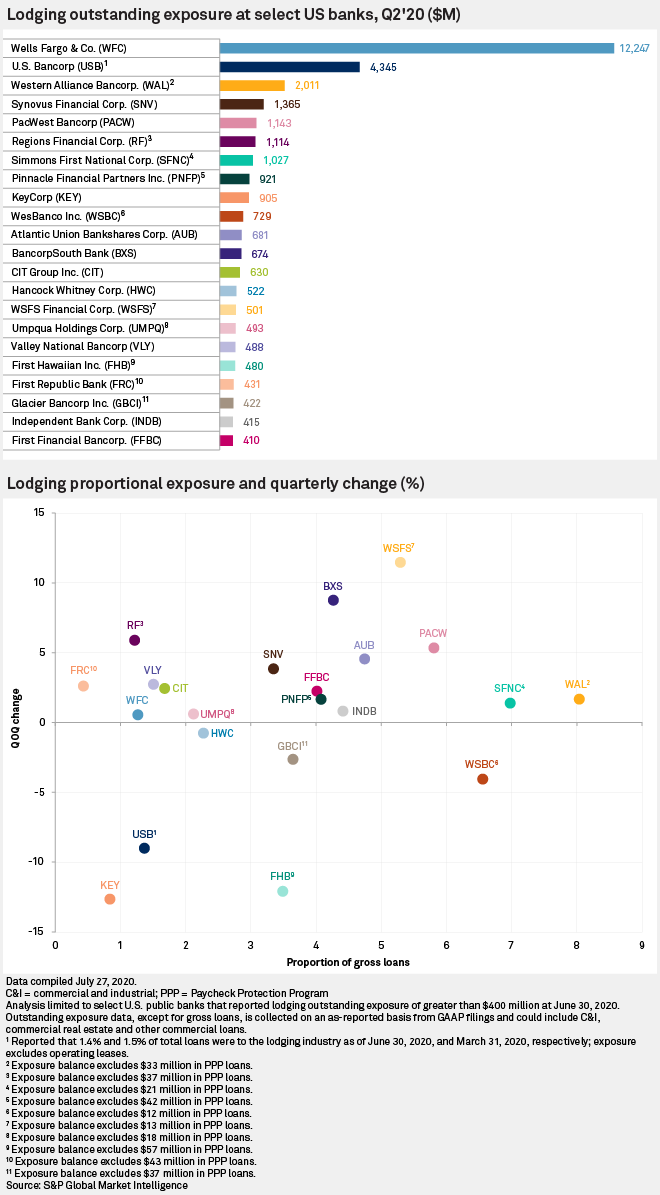 Several banks with notable hotel portfolios increased their exposures in the second quarter despite heightened uncertainty as the COVID-19 pandemic continues to weigh on tourism. Western Alliance Bancorporation, Simmons First National Corp. and WesBanco Inc. were among the large banks with the highest second-quarter exposure to U.S. hotels, an asset class devastated by the pandemic.

Taiwan is famous for its technological prowess, but the digital progress of its banks has lagged behind most key markets in the region. Slow fintech deregulation, low systemwide profitability, and a conservative organizational culture have long stifled the sector's digital transformation. S&P Global Ratings believes that regulatory barriers shelter the incumbent Taiwan banks from disruptive fintech challengers, creating low incentive to innovate, which may eventually translate into diminished competitiveness. However, there is a risk of subpar profit and growth over the coming two to five years, if Taiwan lenders continue to fail to embrace technology. Over the medium term, technology disruption presents just moderate ratings risk to institutions.

In Korea, the rapid adoption of technology among consumers and social distancing measures following the COVID-19 outbreak will speed up banks' digital transformation. S&P Global Ratings expects Korean banks to continue strengthening their digital product and service offerings amid consumer demand for convenient banking services. The country's advanced IT infrastructure and deep smartphone penetration, as well as banks' technology investments enable these players to stay ahead of technology trends.

Clean-energy optimism soars as world struggles with the pandemic's fallout 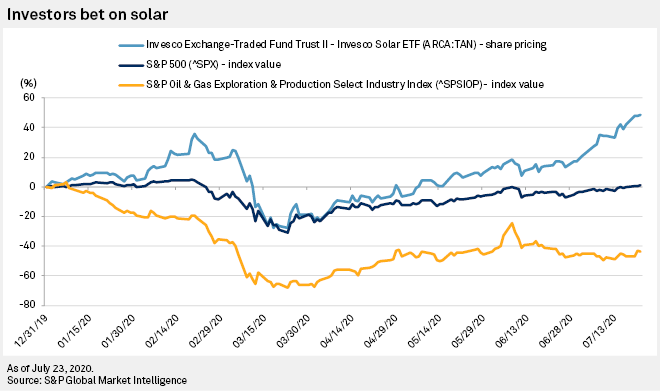 As companies and governments try to steady themselves from the coronavirus crisis, investors and executives in the renewable energy sector say business is chugging along, attracting new money and players as it goes. The momentum is being fueled by a potent mix of falling technology costs and popular support for green government and corporate policies and sustainable investing.

Global passenger electric vehicle sales are estimated to rise to 6.2 million units by 2024, almost three times higher than the volume sold in 2019, according to S&P Global Market Intelligence. MI senior analyst, future energy metals, Alice Yu said in a July 30 webinar that over the 2019-2024 period, MI expected the plug-in, or electric vehicle, segment to dominate demand increases in lithium and cobalt, contributing to 73% and 79% of total demand growth, respectively. "We forecast global lithium demand to increase by 91% to 536,000 mt of lithium carbonate equivalent in 2024, and cobalt demand is expected to increase by 50% to nearly 200,000 mt," she said.

Coronavirus pandemic shakes up supply fundamentals for US plastic recycling

The US plastics recycling industry is struggling to regain its footing as the coronavirus pandemic upended its business model, potentially leaving many recyclers at risk of shutting down. When the pandemic prompted widespread shutdowns in late March and April, millions of workers left office buildings to work from home, cutting off sources of bulk supply of plastic bottles -- made from polyethylene terephthalate -- from businesses. Since lockdowns began, large consumer beverage brands have seen significant declines in away-from-home volume sales. The dearth of sporting events, concerts and other crowd-heavy gatherings, as well as closures or limited operations of bars and restaurants, have slashed bottled drink purchases across the US. Additionally, at-work sales remain sluggish as well since many offices have yet to return to capacity, if at all.

ExxonMobil to ease shut-ins to 200,000 boe/d in Q3 on recovering demand 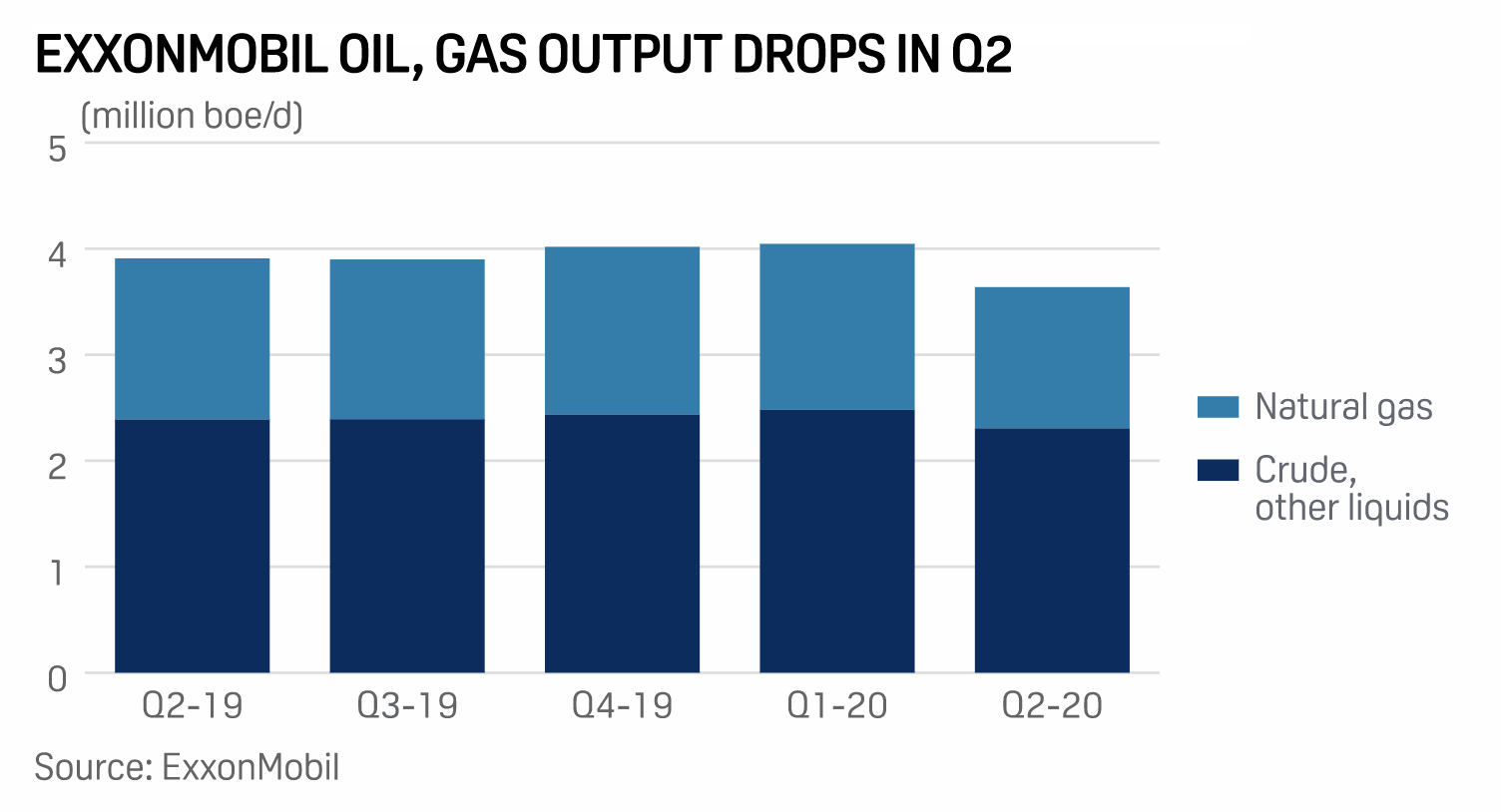 ExxonMobil aims to ease global oil and gas production shut-ins by about 40% to 200,000 b/d of oil equivalent as demand for transportation fuels slowly recovers from a second-quarter plunge. About 70% of the shut-ins expected to persist into Q3 are from government mandates, with the rest being market-based cuts, the company said. ExxonMobil sees global gasoline and diesel demand returning to year-ago levels by Q4, while jet fuel demand will take much longer to recover. The driller posted a $1.1 billion loss in Q2, its largest-ever quarterly loss, as global oil demand sank 20% year on year.

Dominion Energy reported a substantial second-quarter loss as it accounted for the cancellation of plans to complete the 1.5 Bcf/d Atlantic Coast Pipeline that would have fed Appalachian Basin natural gas to markets in the US' mid-Atlantic region. It also announced it will replace CEO Thomas Farrell on Oct .1, acknowledging the upcoming transition back to a regulated utility-focused business from the diversified energy infrastructure company that Farrell had heralded was the right time to implement previously designed succession plans.