Galvanizing international collaboration will be critical to curbing climate change. But countries committed to the 2016 Paris Agreement have made slow progress in aligning their climate policy to achieving net-zero emissions globally by the second half of this century.

The trends that have reverberated across the environmental, social, and governance (ESG) space—namely the path to net zero, addressing climate risk and funding the energy transition via sustainable finance, and setting global ESG reporting standards—will likely be at the top of the agenda as the U.S. attempts to stimulate bolder collective climate action on the global stage today. The country is virtually chairing the inaugural Leaders Summit on Climate of 40 world leaders, including China’s President Xi Jinping, at a time when the need to protect the planet from global warming has never been so clear.

Companies, financial institutions, and countries are pledging to reduce their carbon emissions as close to zero as possible and then use carbon offsets to counteract their remaining emissions. Not addressing climate risks to the fullest extent could prove costly. Major global companies face up to $283 billion in carbon-pricing costs, and 13% of earnings are at risk by 2025, according to a S&P Global Trucost analysis.

The physical implications of climate risk are costing companies and investors billions. Major global companies’ natural capital costs were 77% higher than their net income in 2019, according to S&P Global Trucost, and will continue to expand if global temperatures aren’t stabilized. By 2050, 66% of major global companies will have at least one asset facing elevated physical risk under S&P Global Trucost’s high-impact climate change scenario.

Many corporations and investors are unaware of the financial risks that stem from biodiversity loss, ranging from supply-chain disruptions to volatility across raw material prices and beyond. Without action, the approximately $44 trillion of economic valuethat the World Economic Forum estimates is moderately or highly dependent on biodiversity and nature will be at risk.

“Climate change and biodiversity loss are interlinked, but solutions to reduce greenhouse gas emissions are unlikely to benefit biodiversity in the same way. Instead, biodiversity needs to be given equal consideration in any nature-based climate solution offering,” the S&P Global Ratings Sustainable Finance Scientific Council said in a recent report. “The biodiversity crisis is a still-nascent ESG consideration for investors but it is climbing up the agenda. Governments and companies are increasingly viewing the incorporation of natural capital into assessments of wealth and performance as fundamental to addressing biodiversity loss. Targeted corporate and government actions to reduce deforestation linked to soy, beef, and palm oil will form a key part of the response, as will supporting smallholder farmers and indigenous communities to protect nature.”

Sustainable finance that expands investment in the energy transition has increased. Green bond issuance for environmentally friendly projects grew from almost nothing in 2012 to $282.05 billion in 2020, according to the Climate Bonds Initiative. Issuance of social bonds, or debt instruments that finance projects like affordable housing, equitable healthcare, and education that benefit the broader society, have surged during the coronavirus pandemic. Likewise, sustainable bonds—which are a hybrid of green and social bonds—boomed during the crisis, so much so that S&P Global Ratings projects that global sustainable debt issuance will surpass $700 billion in 2021.

The global health, economic, and social crises of the COVID-19 era have brought attention to racial and gender equity, income inequality, and worker safety, among other issues. Stakeholder capitalism emerged as a movement as investors, corporations, and the public have prioritized social issues and companies' broader role in society.

Against this backdrop, ESG data is evolving as investors demand transparency, and policymakers and regulators impose disclosure requirements. Corporations are responding, but ESG data remain uneven amid a patchwork of reporting frameworks around the globe. Although five times more companies backed the Task Force on Climate-related Financial Disclosures reporting framework in 2020 than in 2017, and approximately 90% of companies in the S&P 500 publish sustainability reports, just 16% of these listed entitites have any reference to ESG factors in their filings. This creates a mismatch between what is disclosed in regulatory filings and what companies voluntarily publish, according to S&P Global Trucost.

“We cannot know with certainty what is right around the corner, however, the events of this past year reinforced the importance of taking the long view — putting in place both policies and business strategies that look beyond next quarter or next year to create just, equitable and sustainable societies that will thrive over the next several decades and beyond,” Martina Cheung, president of S&P Global Market Intelligence and global head of ESG for S&P Global, said in her outlook for this year. “And that means understanding ESG risks and opportunities is a focus that we are invested in for the long haul.”

Today is Thursday, April 22, 2021, and here is today’s essential intelligence.

Global equities continued to rise during Q1 2021, gaining 2.5%, as measured by the S&P Global BMI. Shariah-compliant benchmarks, including the S&P Global BMI Shariah and Dow Jones Islamic Market (DJIM) World Index, underperformed their conventional counterparts in Q1, in part due to the strong performance of the Financials sector, which gained nearly 12% during the period. Apart from Asia Pacific, all regional Shariah and conventional benchmarks returned positive performance during the quarter. 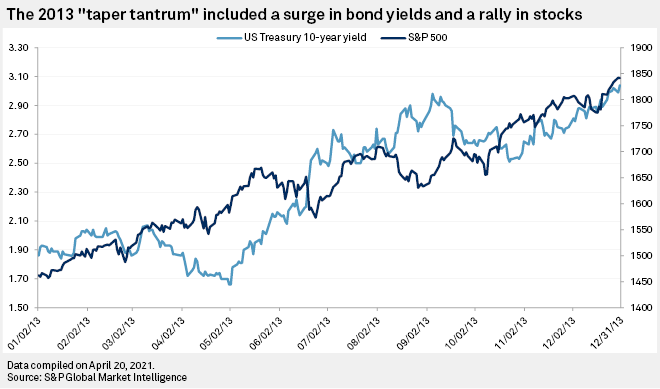 Equity and fixed-income investors remain in the dark over when the Federal Reserve will taper its securities purchases, a potentially historic decision that could trigger a run-up in bond yields or a stock market crash, depending on how long the central bank waits to move.

The Rebound U.S. Retail Has Been Waiting For Arrived In March

U.S. Retail sales were up 10% between February and March. Rebounding consumer spending has finally reached the hardest hit areas. Apparel, department stores, and restaurants are at or near pre-pandemic levels. Rating actions reflect stabilization across the sector. 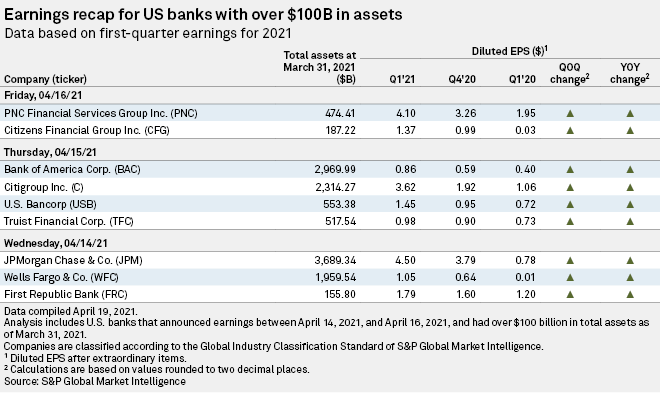 Several big banks kicked off earnings season by reporting EPS growth in the first quarter driven in large part by the release of reserves for credit losses amid signs of an improving economy. All of the banks with at least $100 billion in assets that reported earnings from April 14 to April 16 posted year-over-year and quarter-over-quarter gains in EPS. The Big Four of the U.S. banking industry saw significant year-over-year increases in first-quarter earnings, with EPS exceeding analysts' expectations.

Despite an opening up of China's wealth management industry, estimated to be worth at least US$17 trillion, foreign managers continue to have a problem: entrenched local players with much wider distribution networks and loyal customers oftentimes lured by promises of unrealistically high returns. The question of how best to tap into China's growing wealth has been brought to the fore again, after HSBC Holdings PLC and Citigroup Inc. recently unveiled plans to beef up their wealth management operations in the world's second-largest economy, as they seek stronger fee-income growth in Asia-Pacific to mitigate the slowdown in the U.S. and Europe.

The future of Nomura Holdings Inc.'s wholesale business in the U.S., the company's second-biggest revenue source, has been thrown into question as the fall of U.S. hedge fund Archegos Capital leads to billions of dollars of potential losses and exposes internal risk control issues, analysts say.

ABN AMRO Bank NV is well positioned to absorb a €480 million anti-money laundering settlement but is likely to struggle with profitability in 2021 amid a restructuring and the impact of COVID-19, according to analysts. The third-largest bank in the Netherlands said April 19 it had accepted the Dutch Public Prosecution Service's offer to settle a long-running probe that found shortcomings in its compliance with anti-money laundering rules in the period 2014 to 2020. The additional cost will result in a "modest" first-quarter loss as write-backs and impairment releases will partly offset the impact, the bank said.

IBM's fortunes set to rise in 2021 on hybrid cloud, IT infrastructure spinoff 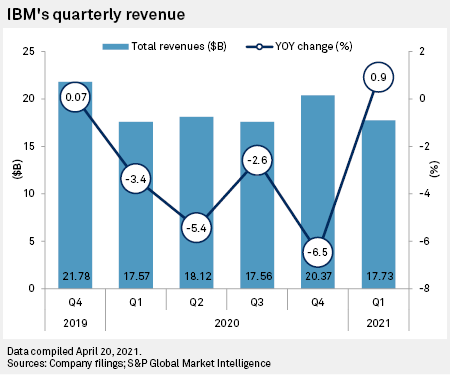 International Business Machines Corp.'s decision to double down on cloud computing and spin off its less-profitable IT infrastructure unit will prove to be highly beneficial for the company in the long run, analysts said. IBM beat Wall Street estimates for the first quarter with a return to year-over-year revenue growth that was primarily driven by its cloud offerings. The company also forecast a return to pre-pandemic levels of growth in the second quarter and through the rest of the year, which would reverse a four-quarter streak of declining revenue throughout 2020. 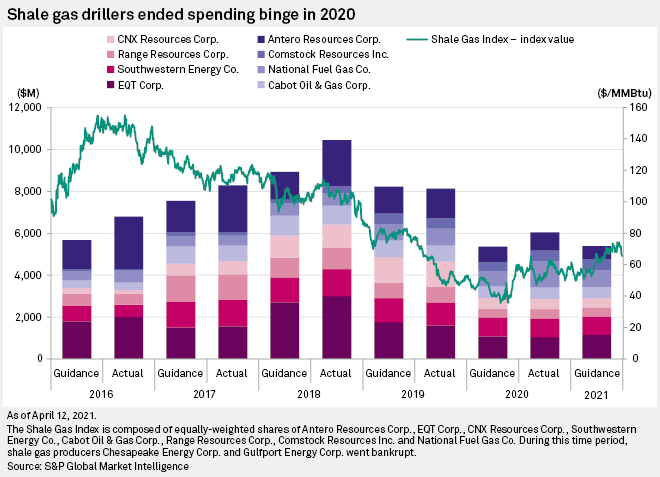 Shale gas drillers have had a history of matching their capital spending to the strength of gas prices, but often when they exceeded guidance, their stock performance dropped as investors walked away, according to S&P Global Market Intelligence data. As the shale gas sector set a combined capital guidance of approximately $5.39 billion for 2021, a decrease from the $6.04 billion actually spent by producers in 2020, the shale gas space saw its stock performance slightly recover, but still remain below the levels achieved in 2016 to 2018.

Singapore — India's efforts at avoiding a national lockdown, despite the surge in COVID-19 cases to record highs, will likely prevent a sharp decline in the country's appetite for oil and gas, with most analysts still hopeful that energy consumption would register positive year-on-year growth in 2021. But regional lockdowns in some provinces and restrictions imposed on certain activities following the surprise surge in infections may prevent a sharp recovery in oil and gas demand that analysts were expecting earlier this year.

Heike Doerr, Principal Analyst at S&P Global Market Intelligence, conducted an in-depth interview with Bob Frenzel, President and COO of Xcel Energy. This is the last in a series of six blogs that summarize discussions by top executives, investment bankers, and ex-Federal Energy Regulatory Commission (FERC) Commissioners about developments in the U.S. utility and power sectors. The discussions took place at the virtual 34th Annual Power and Gas M&A Symposium on February 24, 2021.