India is focusing on hydrogen as the fuel that can drive the country’s energy transition. But will the world’s second-most populous nation, with an economy that ranks No. 3 in greenhouse-gas emissions, make the switch in time to meet global decarbonization goals?

The Indian government recently included a national hydrogen mission in its federal budget, and the country’s energy leadership committed this week to building up its hydrogen supply chain infrastructure to green its natural gas grid along with its broad transport, chemicals, iron and steel, and heating and power sectors.

"The contours of India's energy transition are changing fast. Surely, hydrogen has great potential to emerge as a future source of energy," India’s longest-serving petroleum and steel minister, Dharmendra Pradhan, said April 15 at the virtual Hydrogen Economy: New Delhi Dialogue conference. “Inclusion of hydrogen as an energy carrier in the future energy portfolio presents a unique opportunity to address emerging energy vectors, including power to gas, power to power, power to mobility, and even vehicle to grid applications.”

Hydrogen adoption is widely seen as essential in the transition away from dependence on fossil fuel energy generation and toward a renewable energy mix. While the majority of hydrogen currently in production is generated from petroleum, natural gas, and coal, low-carbon hydrogen is lauded by market participants for its usefulness and versatility across the energy value chain. Companies and countries alike are focusing their technological development largely on blue and green hydrogen, created from natural gas through carbon capture and renewable energy, to drive emissions-reduction efforts. Hydrogen investment is expanding across Europe; in Asia, particularly in Japan; and in the United States through nuclear power plants.

While New Delhi has accelerated its efforts and incentives to accelerate the energy transition, diminishing India’s dependence on fossil fuels will be a slow process—as its reliance on oil is only set to grow.

“By end of the first half of this calendar year, [India’s] oil demand will actually surpass 2019 levels,” Debanjan Saha, who works in the commodities risk management team at Bharat Petroleum Corp., said at the S&P Global Platts South Asia Commodities Virtual Forum in February. “India's peak oil demand will be much later than what many analysts predict. We will be seeing handsome demand numbers going into 2030s and 2040s, if not 2050s.”

While S&P Global Platts Analytics expect oil demand to peak worldwide in the late 2030s, India’s preference for petroleum is likely to last much longer. By 2040, the International Energy Agency expects India to experience the world’s largest expansion of energy demand, with its oil consumption likely to double. The immediate manifestations of that growth will become visible by the end of 2021. The country is already increasing its imports of U.S. crude to meet current demand.

Today is Friday, April 15, 2021, and here is today’s essential intelligence. 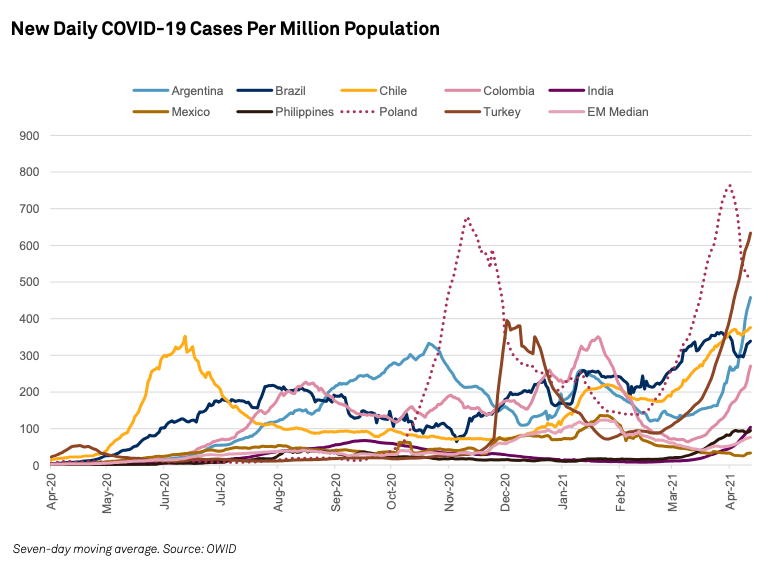 The risk of more, and lengthier, lockdowns is rising as the pandemic worsens again. Financing conditions remain supportive, but long-term domestic yields are starting to rise.

Europe hasn't yet fallen into a liquidity trap. Yet, the eurozone has only marginally spent or invested the massive amounts of liquidity injected into economies to combat COVID-19 shocks—indicating unproductive use of this money.

Credit Trends: The Cost of A Notch: During COVID-19, the Cost of Falling to Speculative-Grade Reached A New High 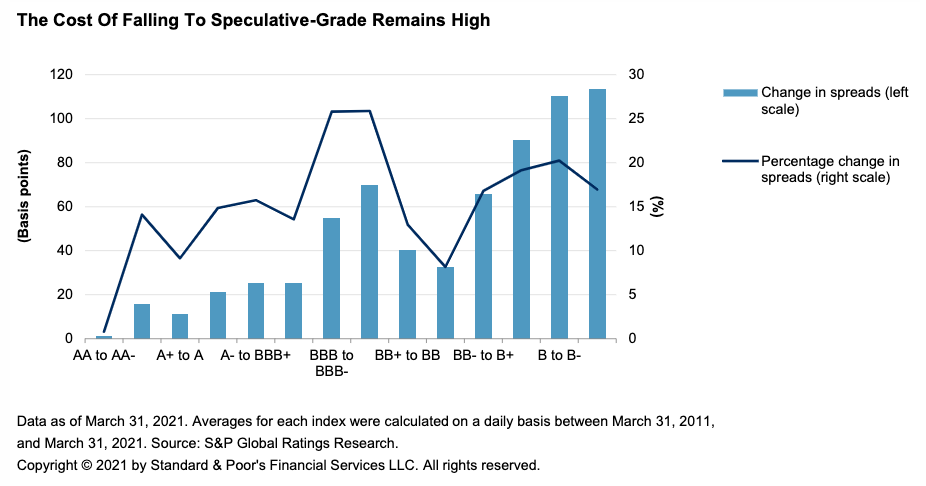 Over the past 10 years, spreads on 'BBB-' rated debt have averaged 264 basis points (bps). That's lower than 334 bps for 'BB+' rated debt, but the relative increase in spread between the two is the highest of any adjacent pair. This jump in spreads was nudged higher during 2020, as the gap between the 'BB+' and 'BBB-' spreads rose to a record wide level last March. Spreads on debt with negative outlooks are wider than those on debt with stable or positive outlooks at the same rating. This reflects the value of our corporate rating outlooks as reliable indicators of relative downgrade potential.

The number of potential fallen angels (issuers at risk of downgrade to speculative-grade), and the debt they represent, continues to fall as the economic recovery takes hold and COVID-19 vaccinations roll out.

Total bonds outstanding of US$17.4 trillion. Real yields in excess of 100 basis points over equivalent debt in U.S. dollars. Low correlation with global assets. Such numbers speak to the potential of the domestic Chinese bond market, which is only about 3% foreign owned. S&P Global Ratings expects China's ambitious measures to open one of the world's largest bond markets to prompt a global migration. China is liberalizing its bond market as part of a wider reform effort to establish the renminbi as an international currency, diversify sources of domestic funding, and improve its allocation of capital.

Dollar bond issuance is booming in Asia as issuers rushed for the last low rates window, but issuance by Chinese corporates is slowing to the lowest in years due to government efforts to rein in leverage post-COVID. Sectors that are directly required or guided by the central government to reduce leverage slowed issuance while those that are not behaved more like their regional peers. These policies are timely, as excessive leverage can make issuers more vulnerable when they refinance lower-cost, longer-term debt from earlier in the cycle with higher-cost, shorter-term debt later in the cycle. 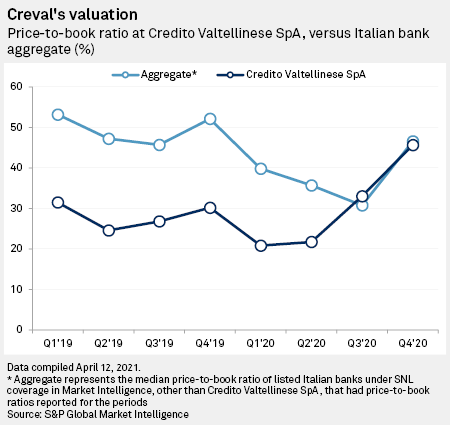 In the latest development in what is surely one of 2021's most enthralling pass-the-popcorn M&A sagas, major Credito Valtellinese SpA shareholder Denis Dumont came out to publicly oppose Crédit Agricole SA's takeover offer for the Italian bank, after which the French bank improved its offer.

As returns-hungry Japanese banks may lend or invest even more abroad after a record year of 2020, the lenders face rising risk of defaults and market volatility in their growing overseas operations, analysts warn. 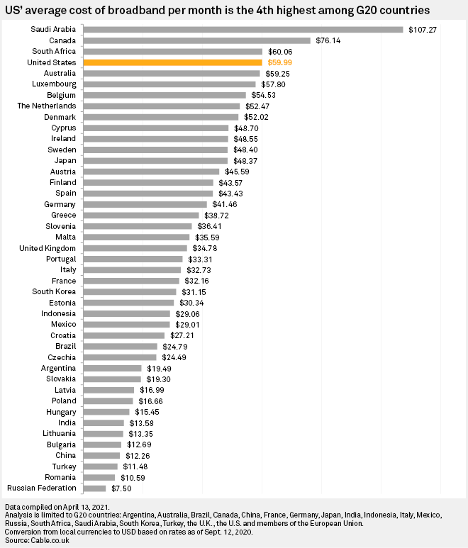 President Joe Biden says the cost of broadband is a problem in the U.S., but the potential solutions to addressing this issue, including the possibility of rate regulation, are neither easy nor popular within the industry.

In the early 2000s, before the global economic crash at the end of the decade, private equity groups invested heavily in the telecom sector, primarily by consolidating smaller cable companies. Private equity firms, including KKR & Co. Inc., Providence Equity Partners LLC, CVC Ltd. and BC Partners are making a comeback, increasing investment activity in TMT companies. They have bought over $10.0 billion worth of media assets, including pay TV and broadband operators, between 2019 and 2021. Since 2019, eight major deals have been signed between private equity firms and telco companies, versus the three signed in the two years before that.

As Smart Glasses Come Back Into Focus, Privacy Risks Fog the Lens

After years of stops and starts, smart glasses are making a comeback. Analysts say a new push by big tech in the smart glasses market could help revive device sales, but they also noted some privacy risks associated with the technology that could prove difficult to overcome.

How One of Europe's Dirtiest Utilities Is Planning to Decarbonize 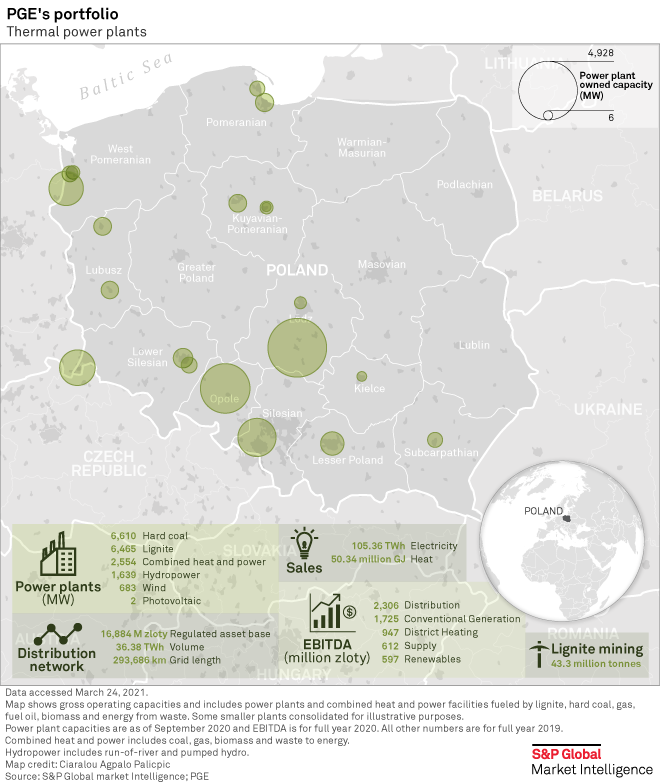 Bełchatów Power Plant, located near its namesake town in central Poland, about 100 miles southeast of Warsaw, is a structure of superlatives. Run by Poland's largest electricity company, PGE Polska Grupa Energetyczna SA, the roughly 5,000-MW behemoth is the largest coal-fired power station in Europe's most coal-addicted major economy and the single largest CO2 emitter on the continent. PGE had once pledged to secure Bełchatów's operations well into the next decade, but that now looks uncertain. The company recently abandoned plans for a new lignite mine at the site, as it follows in the footsteps — albeit belatedly — of nearly every other major utility in Europe in pivoting away from fossil fuels and shooting for net-zero emissions by 2050.

A coalition of more than 40 major industry associations from Europe and the UK has urged leaders from both regions to link up their respective emissions trading systems before the COP26 climate summit in November. The call comes as carbon markets face a crunch moment in 2021 in terms of the role they will play in global efforts to reach net-zero emissions by 2050.

Wind And Sun the New Kids In Town for U.S. Steel Market Under Biden

U.S. President Joe Biden's administration has signaled a strong shift toward renewable energy, while stepping away from more traditional fossil fuels. While the switch will reduce steel demand for oil- and gas-related pipeline projects, greener energy still needs significant amounts of steel. By 2030, offshore wind projects alone could generate as much as 7 million st of new steel demand, according to a recent statement by the US Department of Interior, Energy and Commerce. When combined with planned onshore wind projects and solar investments, steel demand appears poised to surge for renewable energy markets. 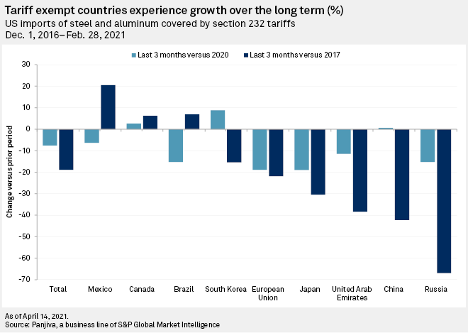 The Biden administration has not disclosed where it will go with steel and aluminum tariffs set under former President Donald Trump, but recent favorable reviews could buoy the trade measures through the immediate future.

Argentina's government is making advances on drafting a bill to provide incentives for ramping up the country's oil and natural gas production and exports, while more immediately seeking an agreement to end a protest stymieing activity in the Vaca Muerta shale play, Energy Secretary Dario Martinez said April 15.