The renewable energy industry may experience a pause in development as a result of disruptions caused by the coronavirus outbreak. The market for installing residential solar panels is “essentially shut” according to Origis Energy’s CEO, Guy Vandehaegen S&P Global Platts reports, while supply chain disruptions “have the potential to delay construction timetables” for large scale projects according the American Council on Renewable Energy.

Installer ReneSola meanwhile has stated that it “anticipate(s) some slowdown in (customer) activities in 2020” according to CFO Kevin Chen. Yet, equipment manufacturers remain somewhat optimistic with JinkoSolar’s CMO Gener Miao stating on March 13 that “the coronavirus impact has not significantly impacted the market till now” while customers have decided to “stick to their plans“.

That may have changed rapidly since then of course. One key risk for the U.S. solar power installation industry could come from the industrial lockdown announced by the Malaysian government which will be in place from March 18 to March 31, Bernama reports.

Panjiva’s data shows Malaysian suppliers accounted for 39.8% of U.S. imports in 2019, followed by Vietnamese suppliers which represented 26.5%. Both have gained at the expense of shippers from China whose supplies had been previously crushed by section 301 duties.

U.S. imports have surged recently despite widespread section 201 “safeguarding” tariffs which have proven less than fully effective, as outlined in Panjiva’s research of Feb. 12. Imports in January jumped 283% higher than a year earlier while seaborne imports show there was an increase of 211% in February. Both followed a 158% gain in Q4 2019. 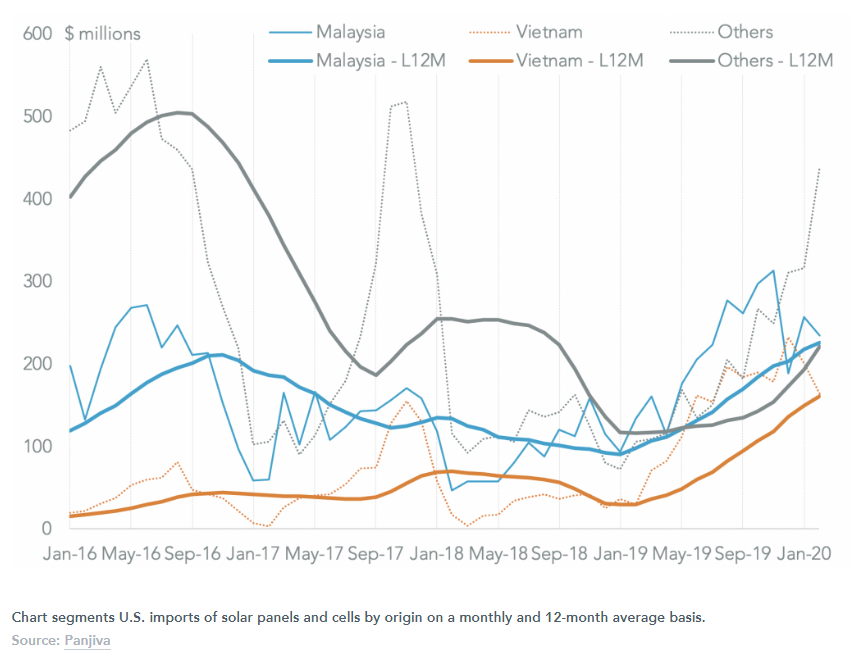 Panjiva’s seaborne shipping data shows that JinkoSolar may have been the largest shipper of solar power generating equipment to the U.S. from Malaysia in the 12 months to Feb. 29 with 6,277 TEUs of shipments linked to the firm. That came despite a 6.6% drop in the three months to Feb. 29 compared to a year earlier resulting from a slide in shipments in February.

By contrast, imports linked to Hanwha Q-Cells, in second place with 5,019 TEUs in the past 12 months, surged 7.2x higher as the company returned to exports at similar levels seen in 2017. Third place went to LONGi Green Energy whose shipments actually fell by a half as the firm had a quiet month for shipments in January. 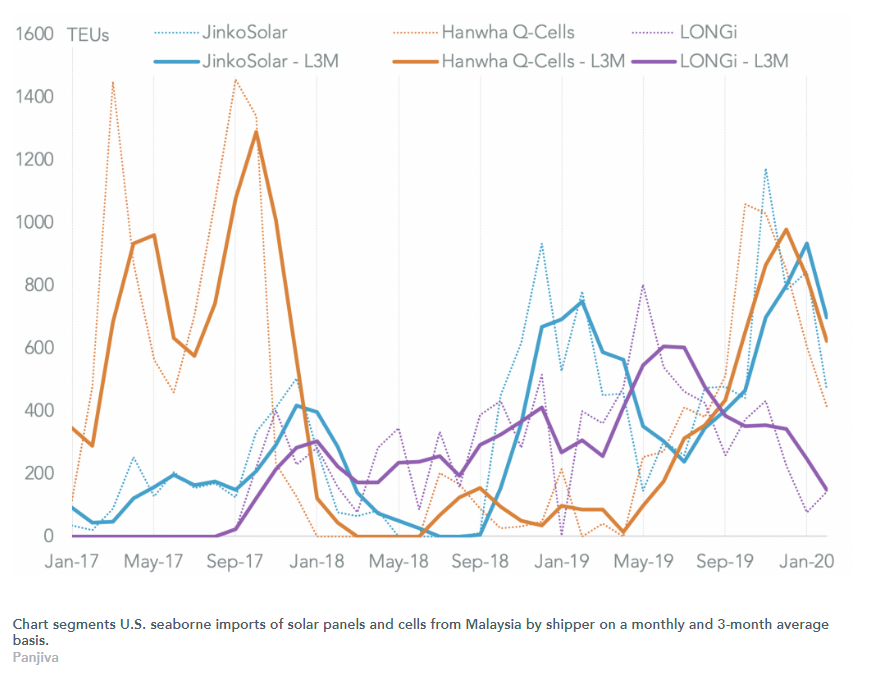