Turning Tides: The Future of Fuel Oil After IMO 2020

Middle East solar dream in danger of early burn out

Jul. 31 2019 — Demand growth in the global LNG market will not only hinge on new infrastructure and growing economies. It will also require an influx of additional buyers entering the market in search of clean, reliable and affordable energy.

Nowhere is this more true than in Asia where steps have already been made to open up markets, add new participants and promote price discovery.

However, demand prospects are very different in the established Northeast Asian market compared with the emerging economies in South and Southeast Asia.

Competing fuels, energy efficiency and infrastructure constraints all play a role in dampening the outlook for demand in Northeast Asia.

China, though, is set to continue to see strong LNG import demand growth given supportive government policy and could well overtake Japan as the world’s biggest LNG importer in the early-to-mid-2020s.

Other established buyers such as Pakistan, Bangladesh, India and Thailand will help prop up demand across the rest of Asia as they look to grow total power generation, industrial end-use and transportation demand while building out infrastructure to support LNG. 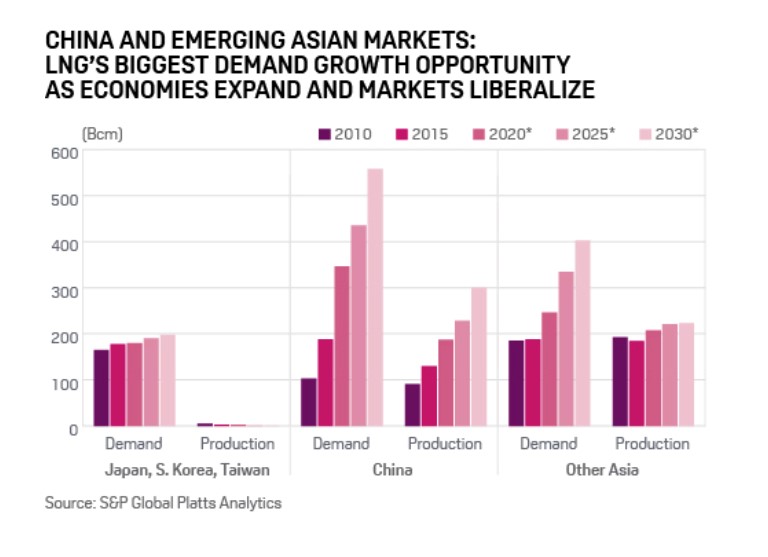 And emerging buyers elsewhere in Asia – countries such as Sri Lanka, Vietnam and the Philippines, which are looking for a reliable source of energy supply to help support their growing economies and in some cases replace diminishing domestic supplies – will help fuel the next wave of LNG importers.

The traditional markets of Japan, South Korea, Taiwan and China represent over 55% of global LNG demand. But shifts in the profiles of these large buyers are likely in the coming years.

Japan, in particular, has traditionally been the driver of much of global LNG consumption, though the country’s recent market liberalization has prompted the relaxation of destination clauses in LNG supply contracts, revolutionizing the role of Japan as a traditional buyer.

With a steady rate in the return of the country’s nuclear fleet post-Fukushima over the next three years, Japan could also see a gradual reduction in its LNG imports. 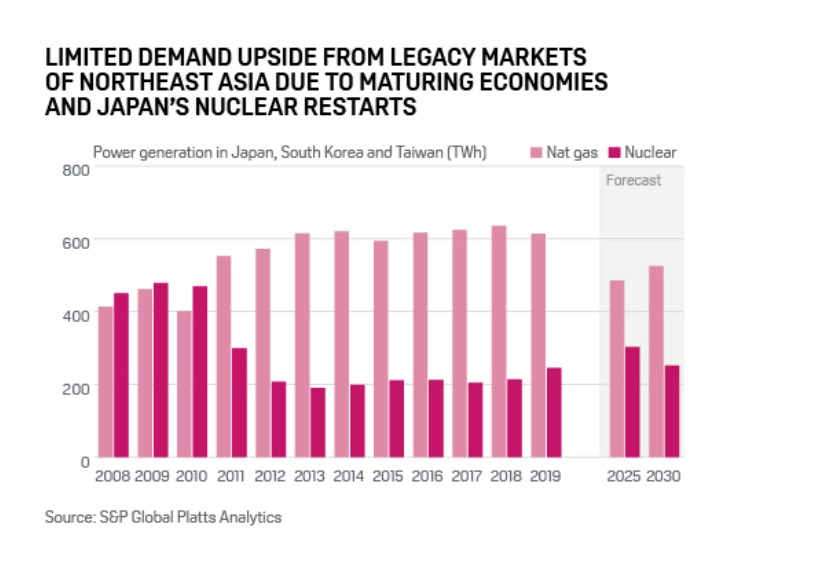 Nine nuclear power plants have come back online as of 2019, with 14 more expected in the next few years, sparking a significant shift in demand away from more expensive LNG.

As a result, S&P Global Platts Analytics estimates the issue of over-contracting to emerge this year among Japanese utilities, while the situation could peak in 2020, with the over-contracted volumes reaching 19.5 million mt.

While it used to be that Japan was heavily geared toward LNG supply security in a post-Fukushima world, now the buzzword is increasingly “flexibility” given its importance when dealing with downstream demand fluctuations amid growing fuel-on-fuel competition.

South Korea, meanwhile, shares a similar story to Japan, albeit with competition coming to a larger extent from coal and renewables.

Liberalizing the country’s gas market would mean allowing new and independent entrants to procure from the international market, while reducing the monopolistic power of state-owned Korea Gas Corp.

Opening up its receiving terminals to the downstream markets will also bring more price competitiveness.

Despite the decision to cut LNG taxes by 74% and raise coal taxes concurrently by 27% from April 1, the economics of buying LNG versus coal in South Korea still seem to favor the latter, not least given that new power generation capacity in recent years has been focused on coal rather than gas.

Of all the traditional importers in Northeast Asia, China’s LNG demand paints the most promising growth picture. The country’s growing appetite for LNG has been on an irreversible upward path since 2017 against the backdrop of supportive government policy on coal-to-gas switching, an attempt to combat nationwide air pollution.

Third-party access to LNG terminals owned by China’s national oil companies as part of a market liberalization initiative has been in place since 2018, while state-planner NDRC is also supporting infrastructure development projects by independent gas distributors and power utilities through the approval of new terminals, storage tanks and import capacity. 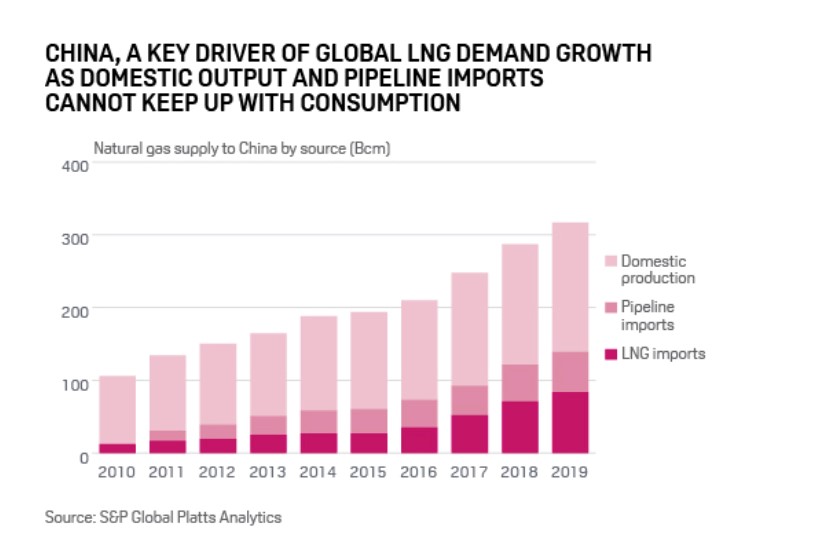 Market reforms are opening up the floodgates, creating additional demand that was previously held back by infrastructure constraints and the monopoly power of China’s state-owned oil and gas companies.

With at least seven new import terminals planned for startup by 2022 – as well as the expansion of existing sites – over 20 million mt/year of receiving capacity could be added, increasing the number of independent buyers from the current eight.

This will free up access to the more fragmented and market-oriented downstream gas and trucked LNG sectors.

Platts Analytics forecasts China will overtake Japan as the world’s largest LNG importer in the early-to-mid 2020s, with total imports at more than 80 million mt in 2024, a 57% increase from 51.2 million mt in 2018.

Away from Northeast Asia, many countries that currently import LNG are looking to established energy economies in Europe and North America for guidance on market liberalization. As more and more countries enter the global LNG market, this trend should help spur demand and increase the total number of players within the region.

This will lead to a strengthening of LNG commoditization and increase the opportunity for spot trading.

The potential market for LNG in Asia outside of the established buyers in Northeast Asia is significant, and Platts Analytics expects LNG demand from this market to reach roughly 130 million mt/year by 2030, up 42 million mt from 2018 levels.

Furthermore, because many of these countries already have established gas markets, the prospect of declining domestic supplies should continue to support the market for LNG.

Countries across Southeast Asia – such as Malaysia and Thailand – will also soon allow end-users access to import terminals, which in turn means more buyers with a diverse set of procurement needs out in the market looking for supplies.

This could easily spread to other less established markets by the end of the next decade.

The biggest obstacle to continuing to integrate LNG and spur strong growth will likely be the ability to implement infrastructure economically.

As the number of buyers increases and the fragmentation in buyers emerges, the literal fragmentation around the geography in Southeast Asia will also become apparent. Buyers will need to invest in significant infrastructure to get volumes to sparse and spread out end-users.

The very reason that LNG is a viable option for much of Southeast Asia – that it can access a wide variety of markets with a diverse set of supplies – could become its biggest hurdle to overcome as buyers will need to look for economically viable options, especially to compete with other forms of energy supply such as renewables or coal.

LNG will need to prove itself as a flexible, affordable fuel in which buyers can have confidence. Increasing competition and the diversification of buyers will help drive the market forward over the next decade, opening up the potential for regional hubs and new pricing points.