Asian refiners have been under constant pressure this year to secure adequate crude supply as geopolitical tensions in the Middle East significantly raised the region’s energy security concerns.

The US sanctions blocking access to abundant Iranian crude supply, as well as a series of attacks on oil tankers and key output facilities in the Persian Gulf, meant many regional refiners that rely heavily on Middle Eastern sour crude grades were kept on their toes. 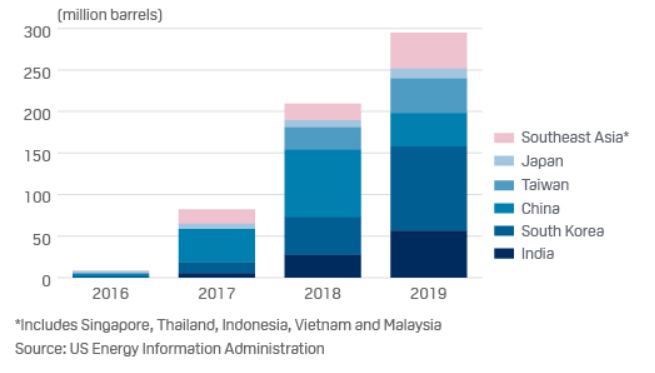 South Korea, China, Japan and India were among the eight countries granted a waiver in November 2018 allowing imports of Iranian barrels to continue until May 2, 2019. But with no further extensions beyond that date from the White House, the vast majority of Asian refiners suspended purchases of Iranian crude and condensate.

Shortly afterwards, a series of attacks in June on oil tankers in the Gulf of Oman, including one on a UAE-flagged ship, put the oil market on alert and triggered growing concerns over supply disruptions.

Iran denied involvement in the incidents. However, the country had on a number of occasions threatened to close the narrow Strait of Hormuz if its oil exports were squeezed by US sanctions, which are supported by its regional rivals Saudi Arabia and the UAE. About 21 million barrels of crude transit the waterway daily – more than one-fifth of global oil supply.

Then in September, Saudi Arabia – the biggest supplier of crude to Asia – suffered a temporary loss of 5.7 million b/d of crude production after attacks on its core oil facilities. Following the attacks, which briefly curtailed nearly 60% of the kingdom’s output, a number of Asian refiners were notified by Saudi Aramco that some of their September and October term crude oil supplies would be affected.

In China, at least three state-run refineries saw shipment of their October term contract barrels from Saudi Arabia pushed back due to the output disruption. Several other term customers were notified by Saudi Aramco that they would have to take Arab Medium or Arab Heavy as substitutes instead of light sour crude.

The heightened risk of Middle Eastern supply disruptions gave Asian refiners little choice but to seek out more reliable crude supply sources, and they looked to the North American market.

South Korea has emerged as Asia’s biggest customer for US crude oil this year, importing 98.67 million barrels of crude and condensate from the North American producer over January-September, up more than threefold from a year earlier, data from Korea National Oil Corporation showed.

“This is part of efforts to cope with the impact of the loss of Iranian oil … the government has been helping local importers diversify crude supply sources,” said an official from the country’s Ministry of Trade, Industry and Energy.

The country’s efforts to diversify crude import sources saw the share of Middle Eastern crude in its monthly procurement basket fall below 70% during the third quarter of 2019, compared with more than 85% on average in 2016, latest data from KNOC showed. 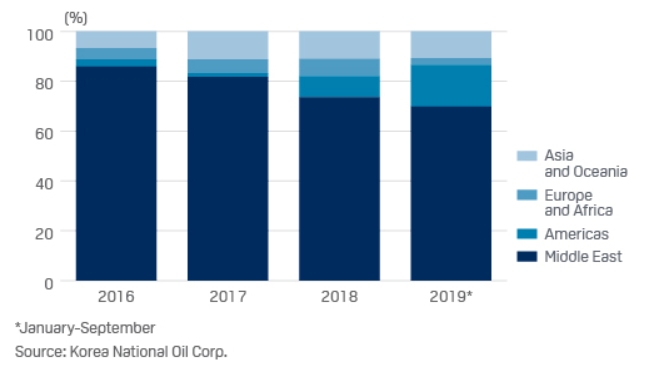 Meanwhile, the US exported around 260,000 b/d of crude oil to India over the first eight months of this year, more than doubling the 138,000 b/d sent in the same period in 2018, according to the US Census Bureau.

“The US is helping India by providing a secure energy supply while meeting its environmental goals,” Kenneth Juster, the US Ambassador to India, told the India Energy Forum in October.

Taiwan broke into the top three buyers of US crude in Asia this year, receiving 186,590 b/d of crude oil from the US over January-August. That was almost double the 100,593 b/d imported in the same period a year earlier, according to data from the Bureau of Energy, Ministry of Economic Affairs.

Taiwan’s strong preference for US crude came as little surprise, as the WTI benchmark remained at a discount against its Middle Eastern and European counterparts Dubai and Brent.

As far as crude quality is concerned, Asia has shown interest in a wide variety of US grades in 2019. Lighter and sweeter US crude grades, including WTI Midland, Bakken, and Eagle Ford crude and condensate, have been among the most popular grades heading to Asia, but some high-sulfur US grades have also regularly attracted customers across Asia since the third quarter.

In South Asia, India’s Mangalore Refinery and Petrochemicals Ltd bought 1 million barrels of Thunder Horse crude from the US via spot tender for delivery over October 11-20. Thunder Horse has a gravity of 32.3 API and 0.90% sulfur content. This North American spot crude cargo deal marked the Indian state-run refiner’s first ever purchase of the medium sour US grade.

“We are open to buying more US [sour] grades at competitive prices in the near future,” a company official told S&P Global Platts.

Mars Blend is a medium crude with gravity of 29.99 API and 1.82% sulfur content. India’s flagship state-run refiner has put in place “a robust sourcing plan” to replace Iranian volumes after the US did not renew sanctions waivers for key customer of Iran’s oil, IOC Chairman Sanjiv Singh said in early May.

In Northeast Asia, Japan imported 1 million barrels of medium sour Southern Green Canyon crude from the US late last year and the country received 995,663 barrels of Mars Blend in March, according to data from the country’s Ministry of Economy, Trade and Industry. Southern Green Canyon has an average gravity of 28.2 API and typical sulfur content of 2.3%, according to crude assays from BP. 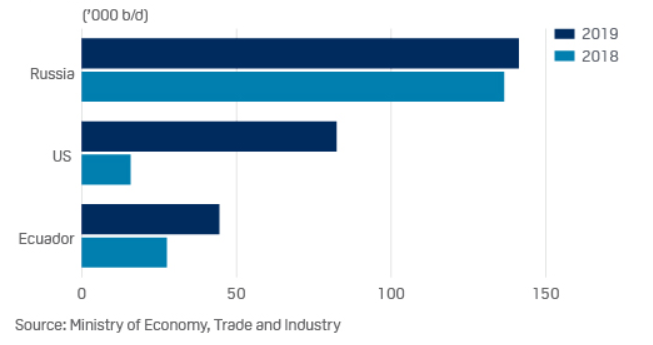 Elsewhere, out of the 98.67 million barrels of US crude South Korea has received so far this year, close to one fifth of the total consists of high-sulfur US grades including Mars Blend, Southern Green Canyon and Poseidon, trading sources at SK Innovation, Hyundai Oilbank and GS Caltex said.

As rival Northeast Asian and Indian importers actively snapped up both sour and sweet US crude cargoes to cover any potential shortfall in Middle Eastern crude supply, Vietnam and Indonesia decided to act quickly to secure their own requirements.

Binh Son Refining and Petrochemical Company (BSR), an affiliate of the state-run Petrovietnam, said it would import 2 million barrels of WTI Midland crude from the US in the fourth quarter. The company, which operates Vietnam’s 148,000 b/d Dung Quat refinery, received a cargo carrying 1 million barrels of the light sweet US crude in October, and was due to receive another cargo in December, a company official said. Dung Quat refinery received its first cargo of US crude in the second quarter of 2019.

Indonesia’s state-run Pertamina also bought its first cargo of US crude in the second quarter. A company source said the cargo of light sweet WTI Midland crude arrived in Indonesia in early June and that more cargoes could be purchased later in H2.

China’s surprise decision in August to include crude oil in its latest round of tariffs on imports from the US did little to restrict the overall US-Asia crude trade flows as various other Asian buyers were keen to pick up US crude cargoes diverted from Chinese buyers.

In retaliation for the US government’s 10% tariff on Chinese goods announced on August 15, Beijing announced a week later that it would levy a 5% tariff on US crude imports from September 1, as part of a new round of tariffs on $75 billion worth of US goods.

However, US crude oil suppliers were able to shrug off the counter-measures from Asia’s biggest oil consumer as demand for the US product remained robust in the region. As US crude has increasingly become a staple for many Asian refineries, the higher offtake from refiners in South Korea, Taiwan, India and Thailand has more than made up for the cutback in China’s purchases this year.

China was the biggest buyer of US crude oil in Asia in 2018, but US crude sales to the Middle Kingdom have been rather small this year. The Asian country imported 15.45 million barrels of crude oil from the US in H1, down 76.2% from the same period a year earlier, according to data from the General Administration of Customs. “We are unlikely to take much US crude as it attracts a 5% tariff now,” said a senior executive at state-run Chinese refiner Sinopec.

China’s sharp cutback in light sweet US crude purchases has presented other regional buyers with an opportunity to secure more low-sulfur refinery feedstocks, market participants said. With a resolution to the trade dispute looking to be within reach, there is scope for a significant revival in Chinese imports.

In Southeast Asia, traders and refinery sources in Thailand, Singapore and Vietnam told Platts that companies may consider offers from Chinese refiners and traders looking to resell some of the US crude cargoes initially bought for fourth quarter deliveries. “US crude is a very popular item for many Asian refiners, so there are plenty of buyers willing to absorb the volume that China wouldn’t take,” said a trading desk manager at a Southeast Asian refiner.

US crude suppliers have emerged as the winner in the battle over the vast and growing Asian demand pie this year, but it may not be plain sailing going into 2020.

A sharp rally seen in international dirty tanker freight rates in the fourth quarter this year could continue to exert a strong influence on crude pricing, potentially making the US-Asia arbitrage uneconomical.

The sharp spike in VLCC freight rates, after the US imposed sanctions on China’s COSCO Dalian Tanker Shipping on September 25 over its failure to adhere to the US’s Iran sanctions, raised alarm bells among Asian crude importers as the cost of shipping crude oil from regular long-distance supply sources in Africa and the Americas rose sharply.

Although the sharp rally in global dirty tanker rates came to a halt, with Platts benchmark Persian Gulf-East Asia VLCC marker pulling back around 40% from the record high hit in mid-October, freight rates remained significantly higher than the levels seen for most of 2019.

Higher freight rates will have a direct impact on Asian crude buyers, preventing them from taking advantage of price arbitrage between oil producing regions.

“This will lead Asian buyers to favor more nearby supply from within the region or the Middle East,” Platts Analytics said.