Oil demand is increasing to pre-pandemic levels. At the same time, the energy transition from petroleum products and other fossil fuels to renewable energy sources is intensifying—with oil majors making net-zero commitments and engaging on environmental issues. Such contradictions call into question the future for oil in a more sustainable energy market.

Some market participants have forecast that the year in which oil demand peaks is on the horizon. But without policy intervention, global oil demand could also expand for years after it recovers from coronavirus crisis-caused lows , despite the increased interest and investment in renewable energy sources. This November’s U.N. Climate Change Conference, known colloquially as COP26, in Glasgow could be the global economy’s last chance to combat climate change and determine immediate and far-term energy needs for a net-zero world.

"Our analysis shows that although the COVID-19 crisis caused a historic decline in global oil demand, it's not necessarily a lasting one," International Energy Agency Executive Director Fatih Birol told S&P Global Platts last week. "If we don't see additional major policy changes from governments and more rapid changes in behavior, then global oil demand is set to increase for several more years to come."

"Already signs are emerging of COVID cases abating with demand now expected to rebound by a sharp 1.6 million b/d in October, and continuing to grow until end-year," the IEA said Sept. 14. "Strong pent-up demand and continued progress in vaccination programs should underpin a robust rebound from Q4 2021."

Many economies continue to rely on oil and the environmental ambitions of oil companies remain vague.

Oil drillers are welcoming investors back into their businesses as pipelines fall out of favor and deal-making continues. A dozen of the world’s biggest oil companies excluded Scope 3 emissions, which are associated with exploration and production products and services, and include downstream greenhouse gases emitted from oil, gasoline, and diesel oil sold to auto drivers and plane operators—from their net-zero pledges.

Even so, ESG is a growing factor for oil and gas assets valuations and lending conditions, according to S&P Global Market Intelligence. Some regions are seeking low-carbon crude.

Ahead of COP26, which will be hosted by the U.K., the head of Britain’s Oil & Gas Authority called on the IEA to assist in creating a so-called transition deal with the global oil and gas industry that assigns responsibilities to realize net-zero emissions. The U.K. finalized such a structure in March of this year with the aim to utilize the North Sea industry to shift the nation to clean energy, while ensuring domestic energy supplies are stable and mitigated with carbon capture and storage, according to S&P Global Platts.

"I personally would like the IEA and others to start looking at a global deal for oil and gas in the way the U.K. has done," Andy Samuel, the U.K.’s head of the Oil & Gas Authority, said last month at the Offshore Europe industry conference. "People who are worried, which is all of us, do need to see not just scenarios, but actually a plan that is 1.5 degrees-compliant, that still brings in the investment required through the transition. And that needs to be a global deal."

Today is Friday, October 15, 2021, and here is today’s essential intelligence. 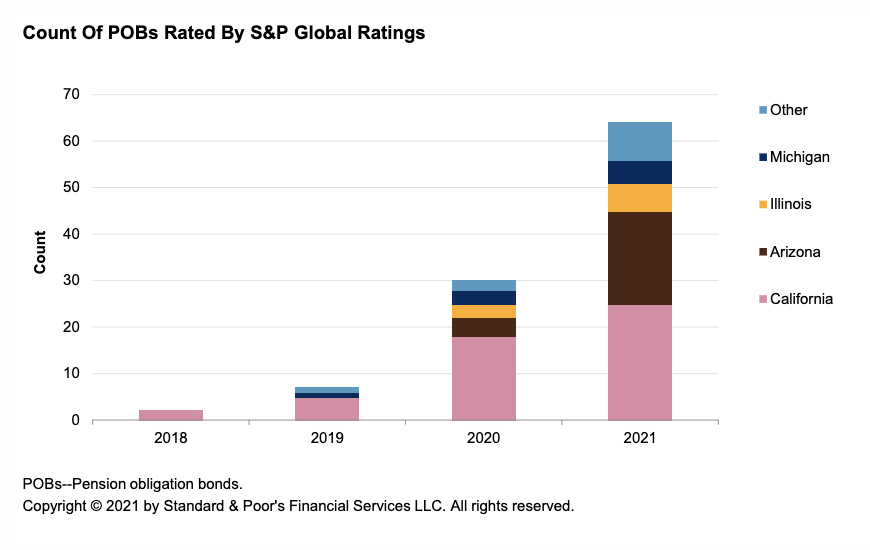 The prevalence of debt issuances to address unfunded pension liabilities continues to increase in the current low-interest-rate environment. From Jan. 1 to Sept. 15, 2021, S&P Global Ratings rated 64 new POB issuances in the USPF sector totaling nearly $6.3 billion; this is a 113% increase in rated POB issuance over the $3.0 billion issued in the entire calendar 2020.

After Going Places It's Never Been, CMBS Lodging Is Back On The Road Again 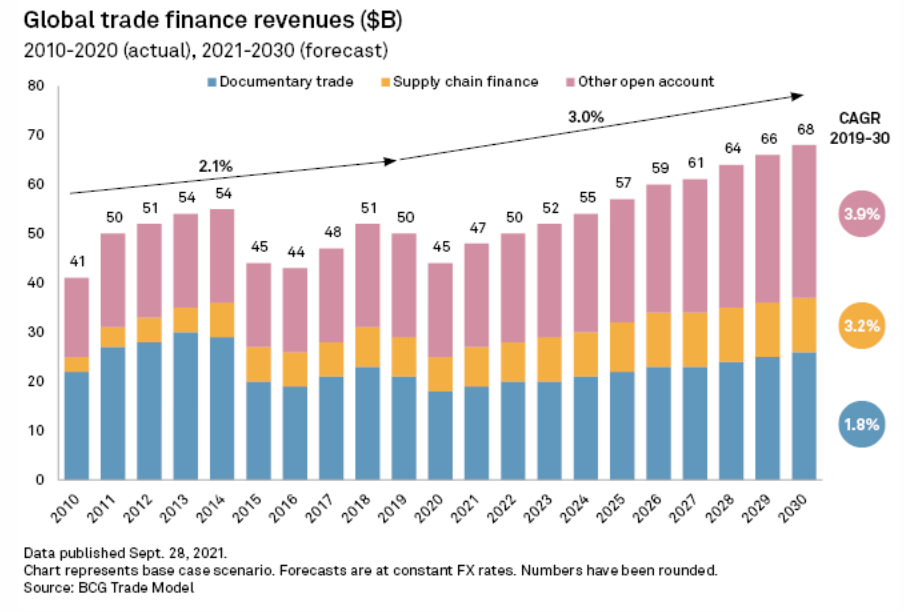 A commerce-led recovery from the coronavirus pandemic has sparked a rebound in trade finance this year, and the growth trajectory is only set to continue with forecasts of a more than 50% rise in the industry revenue pool by 2030.

Among South Africa's banks, Absa Group Ltd.'s aggressive lending and Nedbank Ltd.'s reliance on retail borrowers have put them in a stronger position to navigate the lower-rate environment versus their peers.

Listen: Next In Tech - Episode 35: Multifactor Authentication Needs And Hesitations

The need for more modern authentication techniques has never been more pressing and multi-factor authentication (MFA) is a key building block of zero trust approaches. Tom Gersic, VP of customer success at Salesforce, and Garrett Bekker from the 451 security team join host Eric Hanselman to talk about what’s needed.

—Listen and subscribe to Next in Tech, a podcast from S&P Market Intelligence

Shareholders in 2022 will seek to split the roles of CEO and chairman at Facebook Inc., both currently held by founder Mark Zuckerberg, to create an independent chair seat, marking the fourth year in a row for such a proposal, according to Illinois State Treasurer Michael Frerichs, who is helping to lead the push. 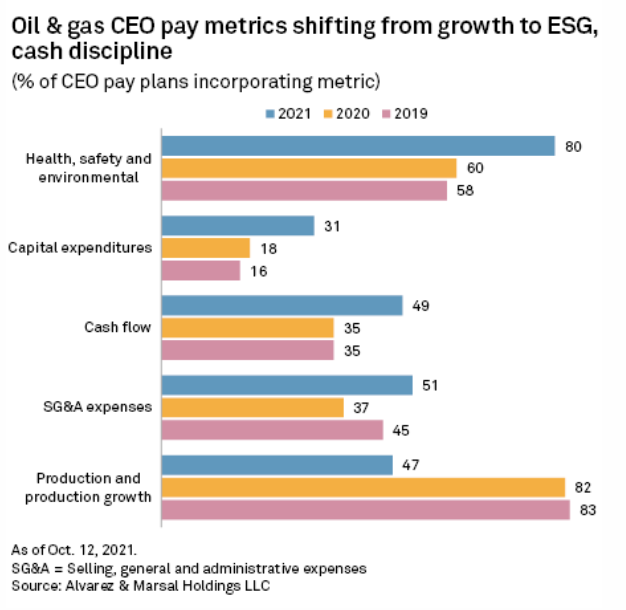 Compensation packages for the heads of independent U.S. oil and gas producers are increasingly tied to progress on environmental, social, and governance issues and less to the traditional metric of production growth, according to a study by executive pay consultants.

As the focus on environmental, social, and governance, or ESG, metrics and accountability measures gain traction in the corporate world, some utilities in the midst of a massive energy transition are taking a closer look at the "s" part of that equation as they seek to meet their climate goals.

Spain's Repsol and Portugal's EDP have signed an agreement to jointly develop renewable hydrogen projects in the two countries. The companies plan to develop projects in Asturias and the Basque Country in Spain, and Sines in Portugal, they said in a statement Oct. 14.

The International Energy Agency has a warning for the warming world: Build more mines or the energy transition will slow down. Projected supplies of key minerals, such as lithium, cobalt, nickel and graphite, are inadequate to what the world will need for a major energy transition, befitting "a world of gradual and insufficient action on climate change, raising the risks of supply lagging behind project demand in climate-driven scenarios," the agency said Oct. 13 in its second-annual World Energy Outlook.

Enduring Waves Of Climate Change: Maritime Decarbonization, A Tempest Before The Calm 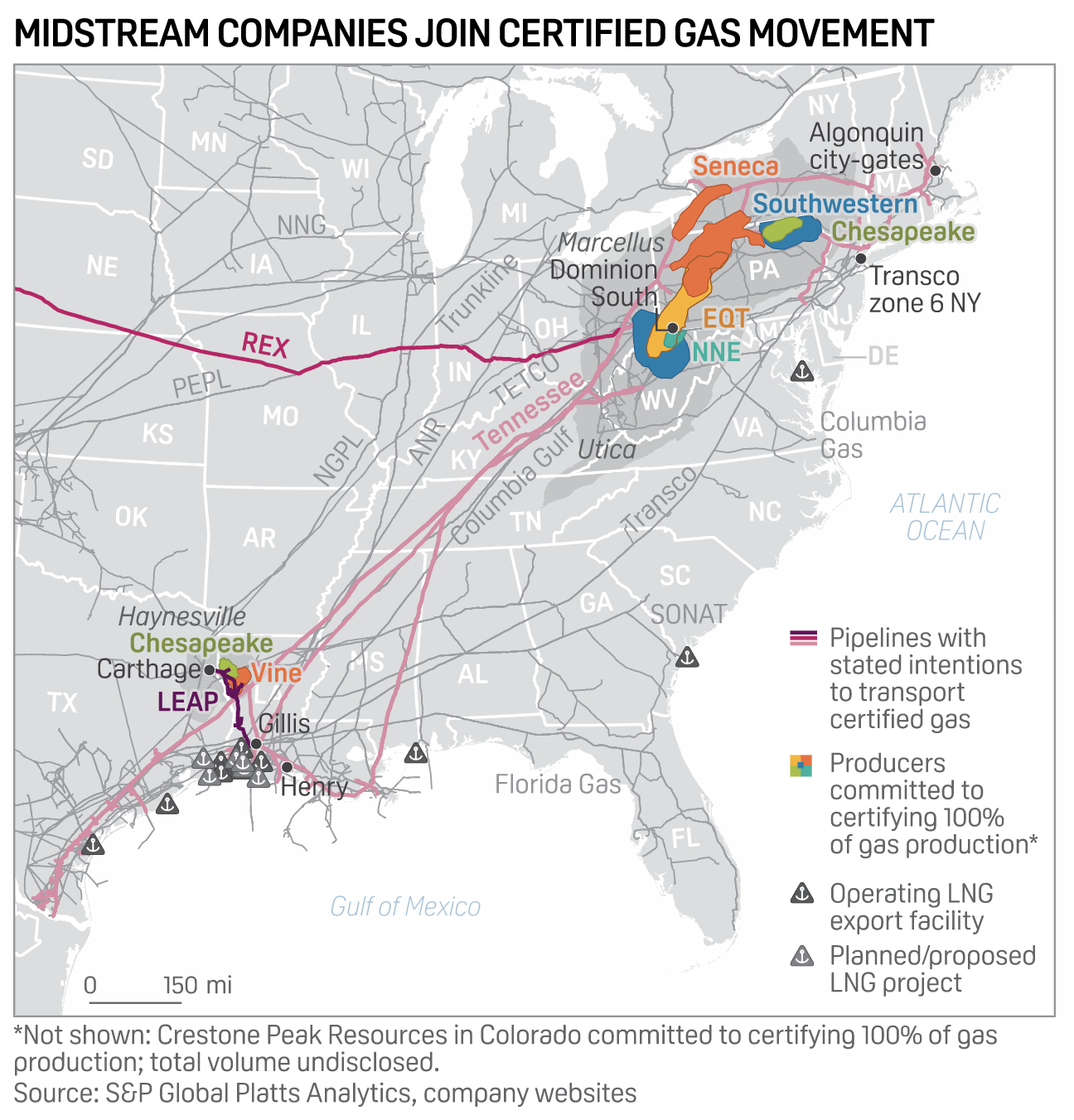 With natural gas drawing increasing scrutiny for its emissions footprint, the industry has responded with a cleaned-up version of its traditional product: certified gas. While a universally accepted definition has yet to emerge, broadly this means gas that has been verified by an independent third party to have been produced in a manner consistent with certain environmental, social, and governance standards.

Russia's Deputy Prime Minister Alexander Novak said Oct. 14 that there had been no official requests put to the Russian government from Europe for additional gas supply. Speaking at Russian Energy Week, Novak also said the Nord Stream 2 pipeline would be ready to begin commercial operations "in the coming days" but that its startup still depended on winning approval from European regulators.

OPEC and its allies are taking a "gradual phased approach" to adding crude oil back to the market after the pandemic slashed demand by some 25%, Saudi energy minister Prince Abdulaziz bin Salman said Oct. 14, brushing back calls by the U.S. to raise output more aggressively to combat rising prices.