Even though green bonds represent a tiny proportion of bank borrowings, S&P Global Ratings expects that share to rise, supported by the fact that banks have a significant role to play in the transition to a low-carbon economy as key providers of funding. Banks have already boosted issuance of green bonds in the past few years, to $27 billion in 2017 from $1.5 billion in 2014 based on data from Climate Bond Initiative (CBI) that we adjusted to include green bonds invested in large-scale hydro or clean coal projects (see chart 1 below). Over the same period banks' share of green bond issuance rose to 16% from 4% and the number of banks having made their debut in the market increased to 72 from just five. Here, we present our findings of a review of almost all of the green bonds issued by the top 200 banks that we rate.

According to the OECD's report "Mobilising Bond Markets for a Low-Carbon Transition By 2035," annual green investment required for the 2-degree scenario will exceed $4.3 trillion. In the EU, U.S., China and Japan, which represent the best established bond markets, the equivalent amount is $2.2 trillion, with about one-third of that projected to be financed through loans. The amount of green bonds that banks are currently issuing is small compared to the OECD's estimates of required annual green investment. Green bonds can provide the means for banks to finance green investments. At the same time, we believe banks use their status as issuers of green bonds to other ends as well, particularly to demonstrate to stakeholders their own contribution to the transition to the low-carbon economy. 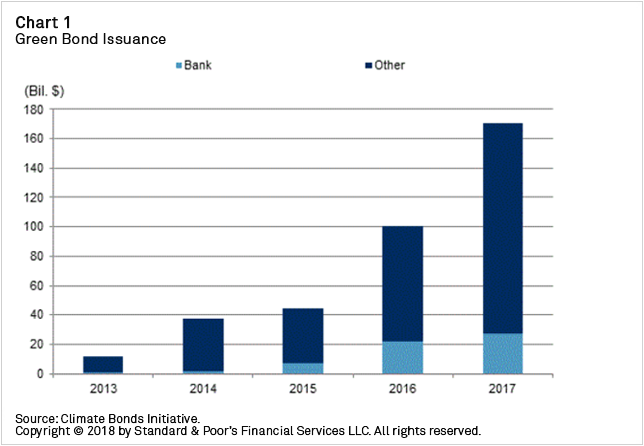 We expect all banks to continue to grow their share of green bond issuance in the near future. We think the the EU's Energy efficient Mortgages Action Plan (http://energyefficientmortgages.eu/) and opportunities offered by green securitization could provide further impetus to market growth. 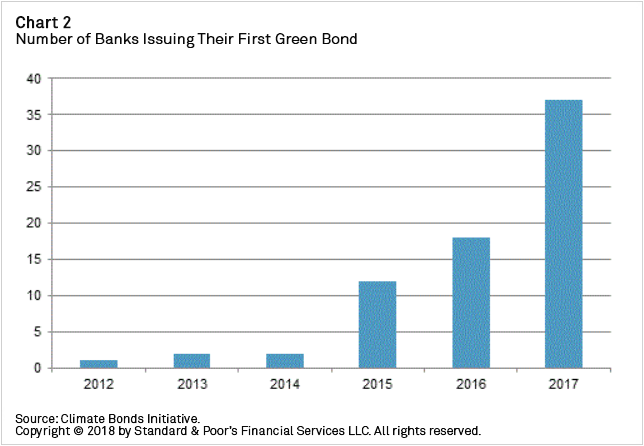 Outside China, Europe is the most active region, representing around one-quarter of total issuance and the number of bank issuers. The geographic spread is very wide with bonds also being issued by banks in emerging markets such as Morocco, Colombia, India, and South Africa. 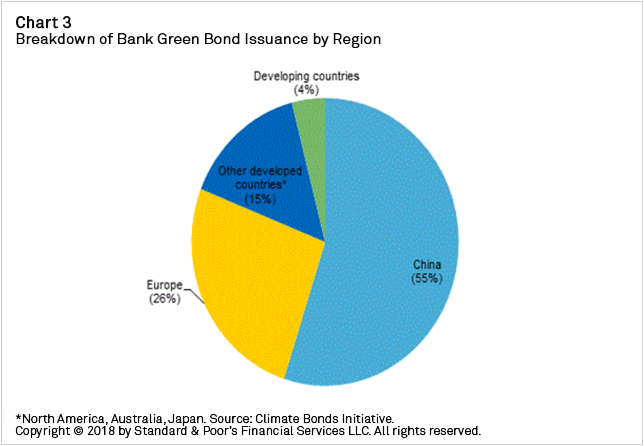 What Is A Green Investment?

Many banks are still in the process of defining what green assets are. Admittedly, we recognize that just identifying green investments within a bank's portfolio is challenging, as highlighted in the The UN Environment Inquiry's report "Green Tagging: Mobilising Bank Finance for Energy Efficiency in Real Estate." Often, the disclosed amount of these green investments reflects the size of only the green portfolio backing the green bonds, which may not represent a bank's total green lending. There are many initiatives to define what green investments are. The reality is that there are shades of green depending on the investment's contribution to the transition to low-carbon economy. (This is the rationale for the approach we adopted in our Green Evaluation, see box). If banks understate their green portfolios, they face increased risk of unfavorable comparisons to their carbon-intensive portfolios, which some nongovernmental organizations are monitoring and reporting. As such, this could raise reputational risks.

Bank issuers rely on standards to define what green investments are, particularly the Green Bond Principles (GBP), which are the most widely used. A notable exception are green bond guidelines in China, which all Chinese onshore green bonds follow. The key differences between those two frameworks are the scope of projects allowed to be financed by proceeds of green bonds. The range of projects allowed under People's Bank of China (PBoC), which applies to banks, is wider and includes projects not explicitly included under GBP, such as fossil fuel power station upgrades and clean coal. In addition, GBP is a principles-based voluntary framework, which allows some flexibility, while PBoC rules are mandatory and embedded in regulation. There are no critical differences between both regimes in the requirements for the management and reporting of proceeds, so Chinese banks can follow international standards for their offshore issuance by restricting the scope of projects financed.

One factor that defines the level of greenness of banks' green bond issuance is their green bond frameworks. Banks typically set up such a framework to define how assets financed through green bonds are selected and how proceeds are managed. The framework also covers reporting on the use of proceeds and any external reviews performed to demonstrate compliance with the relevant green bond guidelines. The framework spells out the process a bank follows when it identifies a suitable green portfolio of existing or new green assets. The proceeds of green bonds are then used to finance or refinance the green portfolio. Often, most of the assets backed by green bonds are existing financing. In that sense, such green bonds do not generate new green assets. However, we believe the green bond market will stimulate banks' future green financings as it would allow banks to issue green bonds once they have generated sufficient volume of new green assets through their lending activities.

Most banks operating under GBP have in place strong governance and reporting of green bond proceeds. They publish detailed green bond frameworks as well as regular green bond reporting, which normally includes allocation of proceeds, typically on an annual basis. Most of them also perform impact reporting at a portfolio level, that is, expected or achieved mitigation effects such as carbon dioxide-equivalent emissions reduction and green energy capacity, for example. The vast majority of the green bonds we analyzed were subject to external review.

Some banks have frameworks that allow them to invest in the whole range of projects allowed under GBP, while some only focus on specific sectors, typically renewable energy or green buildings, or both. In practice, even those banks whose frameworks cover a wider range of projects predominantly invest in renewable energy and green buildings. For around two-thirds of the banks we reviewed outside China, those two sectors represent more than 90% of the allocation. In contrast, in China, pollution prevention and clean transportation represent the largest share.

We see slight differences among banks' definitions of green assets, for example what constitutes green buildings. Banks use different minimum acceptable levels of building environmental certification (for example, Leadership in Energy and Environmental Design or LEED and Building Research Establishment Environmental Assessment Method or BREEAM). Another notable difference is large hydropower projects, which some banks exclude from their green portfolios. There, we see differences about what size constitutes a large hydropower project.

Why Our Mitigation Scores Could Be High For Banks' Green Bonds

The mitigation score is the key part of our Green Evaluation because it determines 60% of the score and fixes a ceiling on the overall assessment. Because the banks we reviewed invest predominantly in renewable energy and green buildings, the mitigation score is likely to be above 50. This reflects the positive impact of our carbon hierarchy, which typically increases the scores of renewable energy above 75 and the scores of green buildings above 50. Such scores are prerequisite for E1-E2 assessments. On the other hand, a material level of investments in clean coal, allowed under the Chinese green bond framework, could lower the mitigation score to a level that pushes the overall assessment down to E3 or lower (around 10% of green bonds issued by Chinese banks invest in clean coal according to CBI data). That's because such investments are in the lowest level in our hierarchy.

A key element factored in our mitigation score is the carbon intensity of the country grid where the project is located. The higher the carbon intensity the better the score, reflecting the higher environmental benefits of decarbonizing carbon-intensive economies. For bonds with significant investments in green buildings, which sit lower in our hierarchy, the carbon intensity of the country could make the difference between E1 and E2 overall assessments. However, for renewable energy projects, the mitigation score tends to be higher across all geographies as we rank these projects at the highest level of our hierarchy. This reflects the sector's relatively high contribution to avoiding and coping with climate change across all geographies.

Our evaluation is point in time and based on the current allocation of the bank's green portfolio. We use banks' current green portfolio as a proxy for the future allocation of green proceeds as we have observed that, even though banks' green portfolios are dynamic, the allocation by sector and geography remains relatively stable in practice. Therefore, if we are asked to reassess a green bond in the future, it is likely to observe a similar mitigation score assuming that consistent levels of reporting, governance, and disclosure are maintained.

A differentiating factor across both governance and transparency is the level of detail in reporting on environmental impact (impact reporting). Those reports are useful for investors to understand the environmental benefits achieved, such as carbon savings. However, the differences in the methodologies adopted to estimate those environmental benefits as well as the lack of detailed disclosure about those methodologies limit the comparability of the results. In addition, there is often no external verification of impact reporting. This may reduce the credibility of that information to investors, who may question its reliability given the complexity and recent developments of impact reporting methodologies.

We estimate that differences in the quality of the impact reporting could reduce an overall Green Evaluation by up to around 10. While this impact is relatively small, for the overall green evaluation it may still be a differentiating factor for banks with a material level of assets outside the renewable energy sector.

Overall, banks' green bonds that are aligned with the GBP and whose proceeds are predominantly allocated to renewable energy assets are, under our analytical approach, more likely to receive an evaluation in the upper quartile. For others with a material level of investments in other sectors high in the hierarchy (such as green buildings), the differentiation between the top and second quartile will likely depend on the carbon intensity of the grid where the green assets are located and features of their impact reporting (for example, level of detail and external verification). The Green Evaluation score of Chinese green bonds could be lower if a material level of the proceeds is allocated to efficient coal technologies. This could be somewhat offset by the high carbon intensity of the grid in China.