Fixed broadband subscribers were on the rise, mostly driven by the expansion of state of the art FTTH networks

Latin America's top 11 telecommunications groups saw pay TV subscribers decline during 2019 and 2020, affected by users' migration toward over-the-top platforms and the decline of direct-to-home services, while fixed broadband subscribers were on the rise, mostly driven by the expansion of state of the art fiber-to-the-home, or FTTH, deployment across the region as the leading players invested in upgrading their networks while phasing out legacy DSL connections.

This report, covering América Móvil, AT&T, Telecom Argentina, Liberty Latin America, Megacable, Millicom International Cellular, Telefónica, Grupo Televisa, Oi SA, Entel Chile y Telecom Italia, contains detailed analyses regarding the behavior of the multichannel, broadband, fixed and mobile telephony markets across the region as well as the top groups' financial and operational highlights and M&A transactions during both 2019 and 2020, in which Spanish group Telefónica continued its divestment strategy in the region to the benefit of players such as Liberty Latin America, Millicom and América Móvil, among others.

Revenues for the top groups declined at the end of 2019, affected by depreciation of local currencies and lower average revenues per user, but broadband revenues increased, making it the only segment to show growth during the year.

Already a client? Click here to see the full report

The year 2019 saw a 3.1% decline in multichannel subscribers across the region with the 11 top groups covered in this report carrying 90.1% of that loss, the equivalent to 2.0 million disconnections. Kagan expects that downward trend continued in 2020 amidst increased migration toward OTT platforms and the adverse economic effects of the COVID-19 pandemic. Six of the 11 top operators — América Móvil, Telefónica, Televisa, AT&T, Telecom Argentina and Oi — saw declines in multichannel subscribers in 2019. 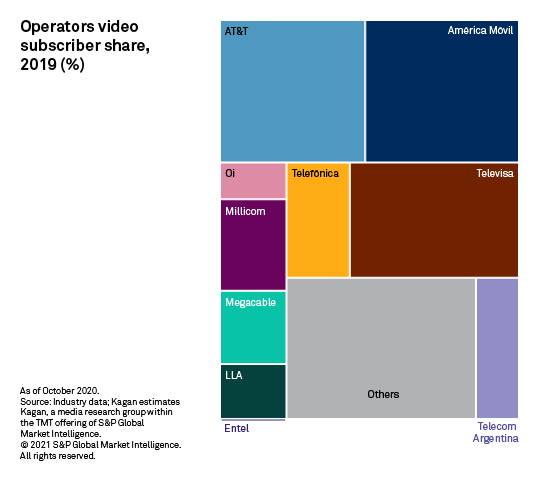 Cable, the leading multichannel regional platform with 50.4% of total subscribers, saw connections decline for the first time in eight years at the end of 2019, losing 318,041 users or a drop of 0.9% to finish with 35.1 million connections, mainly due to cord cutting in América Móvil's Claro Brasil subscriber base. DTH continued a decline that started in 2017, losing 7.4% subscribers or 2.4 million subs year over year to end 2019 with 30.4 million users. IPTV, however, saw a substantial 25.5% increase year over year at the end of 2019, culminating with 3.5 million subscribers or 5.0% of multichannel users, riding on the coattails of increased demand for fiber-based fixed broadband.

Multichannel revenues declined 5.4% year on year at the end of 2019, with Telecom Argentina and AT&T the worst hit in percentage terms with drops of 18.1% and 14.8%, respectively, while Millicom bucked the trend and showed a 25.6% jump in revenues, partly as a result of acquisitions. Televisa, Liberty Latin America, or LLA, and Megacable also reported increases in multichannel revenue.

Already a client? Click here to see the full multichannel market report. If not, click here to read a summary.

Fixed broadband grew by over one percentage point in terms of share in overall revenues in the year to 2019 for the 11 groups considered in this report as more users demanded fast access to internet. Broadband's percent share in overall revenues has nearly doubled since 2011, from 9.2% to 17.4% at the end of 2019 for the 11 top Latin American groups. Smaller ISPs, not covered in this report, have taken a more prominent role in recent years in expanding fixed broadband coverage across the region. 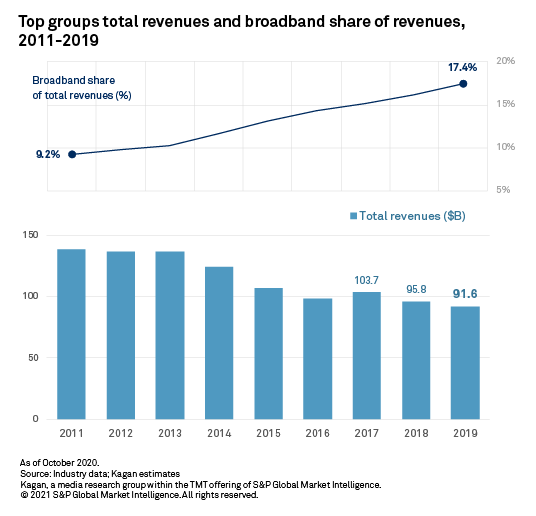 The COVID-19 pandemic accelerated broadband adoption trends in Latin America, as stay-at-home and work-from-home orders were issued in almost all countries. Based on reported data and estimates for third-quarter 2020, Kagan analysis shows that subscriber growth in the first nine months of the year averaged 16.4% among the region's top ISPs covered in our Global Top Operators report.

Already a client? Click here to see the full broadband market report. If not, click here to read a summary.

Mobile subscriptions among the top Latin American telecommunications groups reported a 0.1% drop in 2019, reaching 602.9 million subscriptions. Losses from Telefónica, which is looking to exit non-core markets in the region, as well as Brazilian operators TIM Participações and Oi drove decline, all of which combined account for nearly 44% of regional mobile subscribers. On the flipside, acquisitions across Central America allowed Millicom to report a 19.7% increase in mobile subscribers to end 2019 with 39.8 million.

Total revenues for the segment decreased by 3.4% during 2019 to $53.06 billion, partly as a result of local currencies' depreciation but also thanks to aggressive pricing strategies by operators. As a result, weighted average segment ARPU fell by 3.1% year on year to $7.33 as part of an eight-year trend that has seen prices decrease by a yearly average of negative 6.8% from 2011 to 2019.

As a result of the COVID-19 pandemic, prepaid activity took a blow across the region in 2020 as users remained at home. Consolidation in the sector remained on track with companies making offers for Telefónica's assets in markets such as Colombia as part of the Spanish company's exit strategy and a consortium of Telefónica Brasil, Claro Brasil and Telecom Italia's TIM winning a bid to purchase Oi's mobile assets in Brasil for 16.5 billion reais.

Latin American operators also conducted 5G tests during 2019, but investments in the deployment of the new, faster mobile technology have been put on hold as companies took a conservative capital expenditure stand after the outbreak of COVID-19, and regulators delayed spectrum auctions. Also in 2020, Mexican operators Megacable and Televisa began offering mobile services in their home country via mobile virtual network operator agreements.

The smaller of the groups covered in this report by revenues, Megacable, came on top in 2019 in terms of financial performance, showing a 10.3% revenue increase year on year. Most of the largest operators, including América Móvil, Telefónica and AT&T, contributed to a downward trend.

Groupwide revenues for the 11 groups covered in this report declined by 4.4% year on year at the end of 2019 to $91.61 billion, with only Megacable, Liberty Latin America, Millicom and Televisa bucking the trend as the region was hit by the depreciation of local currencies and lower ARPUs, which declined by a weighted average of 4.0% across the board during the year to $9.61 as part of a trend that saw overall ARPUs decline by an average of negative 7.2% yearly between 2011 and 2019.

Against the backdrop of lower revenues, increased adoption of fixed internet made broadband revenues shine in 2019. The segment was the only one to show growth during the year, expanding by 2.9% year over year to reach $15.97 billion, or 17.4% of total revenues for the 11 groups. Mobile still leads the revenue mix across the region with 57.9% of the total. 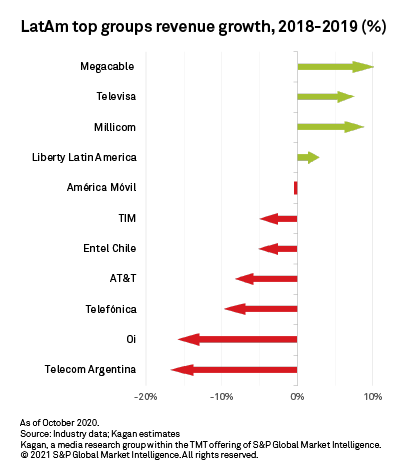 EBITDA margins, a measure of profitability, improved groupwide in 2019, from 32.1% in 2018 to 35.6% the following year, with Telecom Argentina going the opposite way with a 10.1% decline, while Megacable also showed a small 0.2% reduction in EBITDA margin. Groupwide EBITDA rose by 6.0% yearly to reach $32.59 billion.

In 2019, groupwide capital expenditures continued a downward trend that has been in place at least since 2015, ending 2019 at $17.45 billion with a negative 4.5% average CAGR in the eight years since 2011, even as the ratio of capex to total revenues increased from 18.8% in 2018 to 19.1% in 2019. Capex has been mostly focused on the deployment and expansion of 4G and FTTH networks across the region. During the first nine months of 2020, all groups but Televisa reduced capital expenditures in view of the pandemic by an average of 19.7%.

Already a client? Click here for the full financial and operational report.

Several of the top 11 groups were involved in M&A activities both during 2019 and 2020 as many companies tried to consolidate their positions in key markets such as Brazil, while others continued to take advantage of Telefónica's asset divestitures in the region.

Liberty Latin America was one of the leading players in the M&A sphere for this report as it finished the acquisition of AT&T's cable assets in Puerto Rico in the last quarter of 2020, a transaction worth $1.95 billion, and jumped in to acquire Telefónica's Costa Rica assets for an enterprise value of $500 million after Millicom withdrew from the deal. The company also purchased assets in Curaçao and the Cayman Islands during 2019.

Three of the top groups covered in this report, namely América Móvil, Telefónica and TIM, teamed up to acquire the mobile assets of a fourth company in this report, Oi, for 16.5 billion reais. The companies won the auction for the assets in December 2020, and the transaction is expected to be closed by 2021, subject to regulatory approvals.

In December 2020, Televisa announced it converted its warrants in U.S. television group Univision Communications, equivalent to a 36% stake of the company, into common stock in the group as part of a deal with Searchlight Capital Partners and ForgeLight LLC, which acquired a 64% majority interest in the Spanish language television company.