Most operators maintained historical trends in subscriber gains and losses among mobile and residential services.

Millicom backed out of deal to acquire Telefónica's Costa Rica assets to protect its cash reserves.

There was a general feeling of uncertainty reflected in Latin American and Caribbean companies' first-quarter results, with many operators withdrawing previous guidance and reducing projected capital expenditures. However, many reiterated the focus on fiber expansion, as projected in April by Kagan's scenario analysis. Telefónica SA's sale of operations in Costa Rica was the first affected by the COVID-19 pandemic in the regional telecommunications ecosystem, as Millicom International Cellular SA backed out of the acquisition deal with the Spanish company days before the deadline to protect its cash reserves.

The early stages of the pandemic seem to have had a limited impact on Latin American operators' first-quarter 2020 results, as most countries in the region only began implementing quarantine measures in the last two weeks of March. Most operators surveyed by Kagan maintained historical trends in subscriber gains and losses among mobile and residential services, with no perceived slowdown in multichannel cord cutting or significant increase in fixed-broadband adoption. Meanwhile, Netflix reported 2.9 million net additions in Latin America in first quarter 2020, the streaming service's highest quarterly subscriber growth in over two years.

Telcos across the region reported a significant reduction in top-up revenue since the pandemic hit the region as prepaid mobile users reduced their usage. América Móvil SAB de CV was an outlier, reporting growth in both prepaid and postpaid revenues across its Latin American markets, with prepaid performance outpacing postpaid in major markets such as Mexico and Colombia. In line with our April scenario analysis, the company expects a significant reduction in new prepaid activations going forward due to lower store traffic, something also expected by other Latin American players.

Three of the region's top groups that have a larger percentage of their revenues in Latin America — América Móvil, Liberty Latin America and Millicom — showed large jumps in readily available cash and short-term investment figures on their balance sheets in the first quarter. The companies have been increasing their cash "war chests" at least since the end of 2018, but the increases in the more recently reported quarter were significant. 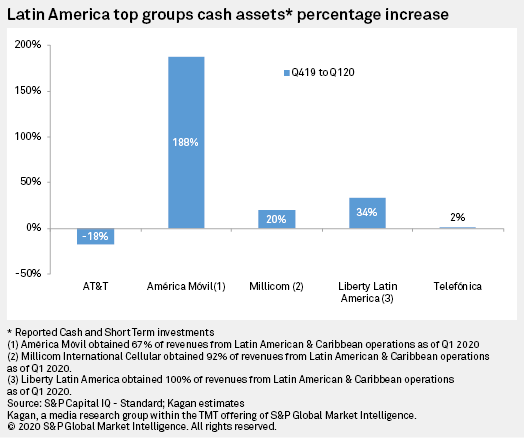 Despite the increased risk of late payments, receivables remained below the maximum of the previous five years for all operators except Telefónica. However, some companies reported unpaid bills as revenues due to the normal billing cycle. América Móvil, for example, booked the unpaid revenue but increased bad debt provisions.

All operators increased their levels of gross debt as a percentage of assets with respect to Dec. 31, 2019. América Móvil had the largest increase quarter over quarter, raising $2.96 billion from banks during first quarter 2020, a 9% gross debt increment. Telefónica and Megacable were the only groups not to increase gross debt. Both operators decreased their debt by 0.3% and 0.5%, respectively. However, their debt as a percentage of assets still increased.

Going forward, companies expect reductions in gross additions due to the closure of points of sales and social distancing policies restricting new installations as well as reduced churn as customers avoid the risk of being left with no service, helped by government restrictions on disconnection of delinquent clients. In Brazil, small ISPs have already reported problems with delinquency from small and medium-sized enterprise customers as small businesses struggle to make ends meet, with many being forced to close for good.

Millicom CEO Mauricio Ramos told analysts during its first-quarter 2020 results call that the decision not to proceed with the acquisition of Telefónica's Costa Rica assets, which saved the company $576 million, was "prudent" in the current environment.

Ramos' remarks set the tone for many of Latin America's telecommunications industry's quarterly calls: It is too early to know the real depth of the crisis brewing as a result of social distancing, business shutdowns and office closures ordered by governments across the region to slow the rate of contagion; guidance that sounded feasible at the beginning of the year might prove unattainable looking forward, and liquidity is king.

"There is no clarity as to the duration or magnitude overall or its impact in the countries where we operate," Carlos Garcia Moreno, América Móvil's CFO, told investors, while Christopher Noyes, Liberty Latin America's CFO, said earlier projections were no longer applicable: "Although our overall business held up well during Q1, we are withdrawing our 2020 guidance given the substantial uncertainty that we face within our markets."

Liberty Latin America announced a $150 million reduction in both capex and operatonal expense, or opex, while América Móvil said it could defer capital expenditures in 2020, as the second quarter of the year could see a more widespread application of anti-contagion measures in the region. Millicom said it expects to reduce capex and opex by approximately 20%, or about $200 million, in the year, redirecting its focus toward network stability and capacity. According to the company's earnings release, the pandemic reduced first-quarter revenues in Latin America by $10 million, or 0.7%, but "early signs suggest service revenue could be down between 6% and 7% organically in April" due to the impact of COVID-19 lockdowns. 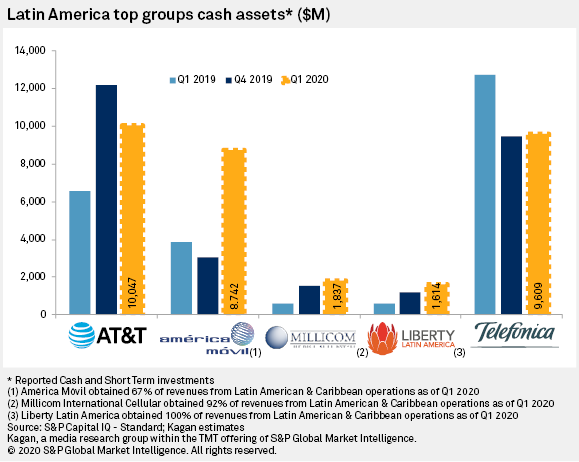 Despite the setback regarding the Costa Rica operation, Telefónica was the most optimistic of the major regional groups, perhaps due to having only 38.9% of revenues hailing from Latin America and to its plans to divest its HispAm division. The company confirmed the divestment plans during its conference call: "We continue working at full speed in the operational carve-out," said CFO Laura Abasolo, adding that the company is preparing for a potential financial spinoff but also considering M&A alternatives. Despite the environment of uncertainty, the Spanish group reiterated its 2022 guidance and 2020 dividend payouts while expectations for 2020 were changed to slightly negative to flat OIBDA-capex. 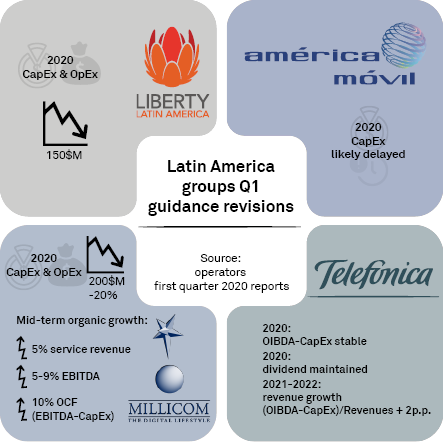 The company's Brazilian subsidiary Telefônica Brasil also confirmed ongoing negotiations to acquire the mobile operation of Brazilian telco Oi SA in a shared deal with Telecom Italia SpA's TIM Participações SA, or TIM Brasil. The two companies, Brazil's largest and third-largest mobile carriers, announced the move in March. According to TIM Brasil CFO Adrian Calaza, the COVID-19 pandemic has not affected due diligence of Oi's assets, and they expect to inform the market on the deal within the following months.

For a scenario analysis on the effects on the pandemic, click here.

With most people sheltering in place, internet traffic saw a significant increase, Millicom's Ramos said. The company saw fixed network traffic increase by 40% to 50% across its markets in the two months to April 30, he added, which explained the need to redirect investments toward it. Liberty's CEO Balan Nair said they saw a 40% increase in fixed networks' traffic since the beginning of March, with double-digit peak traffic increases on its mobile networks as well.

Mexico's Grupo Televisa SAB, the country's leading provider of multichannel services, as well as one of the main fixed broadband providers, said it reached an all-time record in the number of gross additions during March, as the importance of connectivity came to the fore. "During March, as the effects of COVID grew, we saw an acceleration in demand for our services. We saw an increase of over 40% in data traffic, both downlink and uplink. Also, the average duration of calls increased by more than 30%, while VOD and transaction VOD also saw similar rates of growth," said Salvi Folch, the company's CEO for the cable division.

"We note that demand for telecommunications services, including services provided by our company, during the pandemic has grown significantly," Brazil-based Oi said in its Form 10-K. While the Brazilian telco had yet to report first-quarter 2020 results at the time of our analysis, the company did comment on the impact of the pandemic. Oi said while it expects demand for its rapidly expanding fiber-to-the-home network to remain high, the telco has faced problems in providing support for field teams working on the new fiber build-out and routine maintenance, with limited housing, food and transport for personnel, which may affect future operations and sales.

Argentina's largest telco, Telecom Argentina, reported a 50% increase in residential download traffic and 75% in uploads since the beginning of the COVID-19 crisis in the country. On mobile, voice traffic was up 50% with a 24% increase in call duration, while data traffic increased 20%. The services that registered the most traffic growth were videoconferencing at 1,000% and storage file sharing at 600%.

Click here to read more of our COVID-19 coverage.