Speakers expressed concern over regulatory uncertainty, and key OTT players, such as HBO Max, Disney+ and Viacom, chose to sit out the conference for the same reason

The 2020 edition of Teletime's Brasil Streaming conference, held on July 16 and 17, was a bit different. Not only was it online this year due to the COVID-19 pandemic, but for the first time in multiple iterations of the event, there was no dedicated panel to discuss over-the-top regulation in the Brazil market. However, the theme pervaded all debates, as speakers expressed concern over regulatory uncertainty, and key players chose to sit out the conference for the same reason.

The Brazilian OTT market has been on pause for several months now, as telcos, programmers and streaming services await a decision from telecom regulator Anatel on whether traditional linear multichannel content may be distributed online according to Brazilian law.

The regulator is expected to deliberate on the issue during its next board meeting on Aug. 6, based on an injunction presented by operator Claro Brasil against Fox Play, the TV Everywhere-turned-OTT service offered by The Walt Disney Co.-owned network programmer Fox Networks Group Latin America, which allows nonpay TV subscribers to watch its linear channels online. The cable and direct-to-home provider argues that Fox benefits from not being subject to the same regulations as traditional multichannel operators while providing a multichannel service. Following the injunction, Fox shut down its stand-alone subscription offer for the Fox Play app, although the streaming platform is still available to nonpay TV customers who subscribe through their ISP or mobile carrier.

Also on hold is the key question of market verticalization, as the 2011 Pay TV Law (Lei do SeAC) currently bars cross-ownership of operators and network programmers, effectively putting up a wall between content and distribution. Despite this rule, the regulator has given its blessing to the merger between AT&T Inc. — which owns Brazil's largest DTH operator, SKY Brasil — and Warner Media LLC parent company to some of the country's top multichannel networks, including channels produced by Turner Broadcasting System Inc. and Home Box Office Inc. Anatel is imposing a condition, however, that both operations must remain separate entities in the country. The law also requires operators and programmers to fulfill programming quotas for national content as well as details must-carry rules for free-to-air and public service networks.

A report by technical analysts at the regulator also identified that traditional multichannel providers are subject to at least 24 regulatory and legal obligations that OTT providers are exempt from, not including consumer and quality regulations. The report also estimated that were all pay TV operators to migrate to an OTT business model, the loss in tax revenues would total 3.7 billion Brazilian reais, as online value-added services are taxed differently from telecommunications services under Brazilian law and are not regulated by Anatel.

While there are several proposed bills in Congress to change the SeAC law, none so far has advanced, meaning that the legal situation is still viewed as precarious for market players. Lifting the cross-ownership ban would allow operators to acquire exclusive rights to sports broadcasts, a key asset for internationally-based multichannel service providers, and one that could help operators reduce cord cutting. 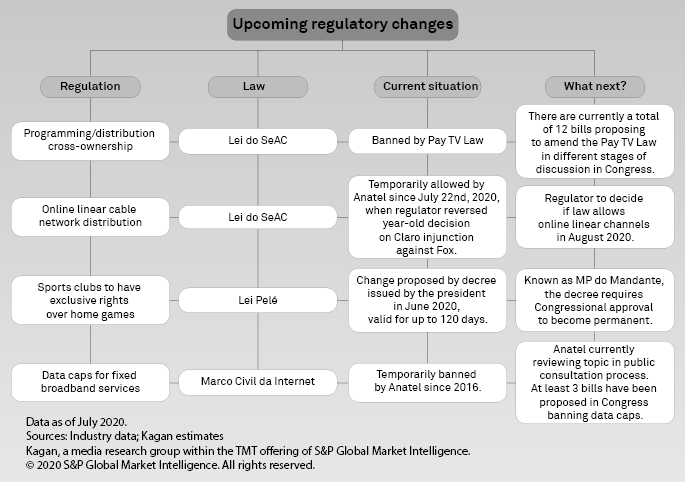 According to the event's organizers, this regulatory uncertainty was cited as the reason many relevant players in the OTT market, such as HBO Max, Disney+, and ViacomCBS Inc., have yet to officially announce launch dates in the Latin America country — even as they prepare to launch in the rest of the region — and therefore declined to speak at the conference. Local broadcaster Globo Comunicação e Participações SA has also postponed new product launches for its catch-up-turned-OTT service Globoplay, due to the indecision surrounding linear channels. The company has suggested in the past that it plans to add multichannel content — both linear and VOD — from its subsidiary Globosat to the streaming service.

Representatives from both Claro Brasil, the country's largest multichannel and broadband provider, and Oi SA, the incumbent telco for 25 out of Brazil's 26 states, confirmed they would look into launching virtual multichannel services in the country if Anatel decided to allow online distribution of linear pay TV channels. Both companies already offer their broadband and mobile subscribers access to selected VOD content on their TV Everywhere platforms, NOW and Oi Play, although only Oi includes linear channels in its offer to nonpay TV subscribers.

Claro Chief Marketing Officer Márcio Carvalho also said the telco would be interested in producing its own content if regulatory restrictions were lifted. He cited exclusive content, such as the Olympic Games, provided by parent company América Móvil SAB de CV in other Latin American countries through its Clarovideo OTT service.

Meanwhile, Alfredo Souza, marketing director for Telefónica Brasil, the market's largest mobile and fiber broadband provider, said the company would continue to focus on OTT partnerships. In 2018, Telefônica Brasil's parent company, Telefónica SA, launched virtual multichannel services through its subsidiaries in Colombia, as did AT&T's Vrio Corp. (DIRECTV Latin America), which has since expanded the online offer to Chile, Ecuador, Mexico, Peru and Uruguay. However, neither has announced plans to launch similar services in Brazil, although a Brazilian domain for DIRECTV GO recently went live.