Brazil Pay TV Down Record Amount In 2019, With Losses Continuing In Q1'20

Brazil was one of the fastest-shrinking multichannel markets in the world in 2019, with subscribers down a whopping 10.6%.

Between 2015 and 2018, the drop in pay TV subscriptions in Brazil was mainly due to increasing unemployment and shrinking household incomes following economic crisis.

Coupled with broadband expansion and increasing OTT adoption, a growing number of cord-cutting and cord-never households in Brazil have access to free-to-air broadcast signals with the migration of analog to digital terrestrial television.

Brazil's cord-cutting trend shows no signs of slowing despite millions being forced to stay home due to the COVID-19 pandemic, which is rapidly spreading throughout the Latin America and Caribbean country. According to regulator Anatel, the Brazilian multichannel market suffered net losses of 93,260 in March 2020, up from 69,724 the previous month, with direct-to-home, or DTH, services representing 94.7% of subscribers lost. 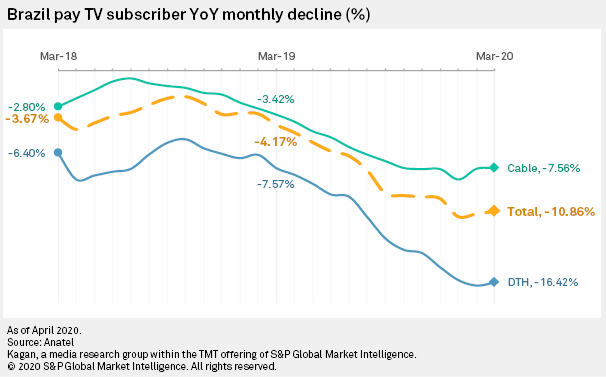 In the early days of the coronavirus outbreak, operators announced they would offer free previews for premium networks, as a way to encourage customers to stay at home and reduce churn. With free previews having since ended, along with the increasing pressures of unemployment and reduced incomes, cord-cutting is expected to accelerate in the coming months as the effects of the pandemic and quarantine measures take their toll on an economy still recovering from recession. According to official statistics agency IBGE, the unemployment rate jumped from 11.0% in the fourth quarter of 2019 to 12.2% in the first quarter of 2020, reaching 12.9 million people.

Even prior to the COVID-19 pandemic, Brazil was one of the fastest-shrinking multichannel markets in the world by year-end 2019. According to Kagan estimates, the country's pay TV subscribers fell by a whopping 10.6% in 2019, representing a loss of 1.9 million households, second only to the U.S., at 6.4 million net losses in 2019. This was the fifth decline in a row for the Latin American country, which totaled 15.7 million multichannel households by year-end 2019, down from a market high of 19.5 million in 2014. As a result, Brazil's position among the largest global multichannel markets by subscribers dropped from seventh in 2015 to 10th in 2019.

Already a client? Please refer to the Brazil country profile and forecast table for a complete analysis of Brazil's multichannel and broadband markets.

Between 2015 and 2018, when annual declines averaged 2.5%, the drop in pay TV subscriptions in Brazil was mainly due to increasing unemployment and shrinking household incomes following economic crisis. Indeed, lack of affordability is consistently cited as the main reason for not subscribing to pay TV services in the annual PNAD TICs survey, according to IBGE. In 2018, this represented 51.8% of households surveyed, while 39.8% of respondents cited lack of interest in the service.

The PNAD TICs survey, while also showing a decline in households with access to pay TV, has also consistently shown a greater number of households self-reporting as multichannel subscribers than operators report. While part of this may be due to underreporting by smaller operators, it is possible many of these additional multichannel households are actually using pirate services, whether paid or not. Between 2016 and 2018, these excess pay TV households grew from 3.9 million to 4.4 million, suggesting an increase in piracy adoption.

In the early stages of Brazil's cord-cutting trend, losses were more pronounced among non-convergent DTH satellite providers, in part due to the loss of low-value prepaid customers, a segment that had represented much of the platform's growth over the previous decade. Although DTH remains the platform contributing most to multichannel decline in Brazil, all operators accelerated losses in 2019 compared to 2018.

DTH's lack of bundling opportunities may be partly to blame, as subscribers and operators choose to migrate from DTH to cable or fiber bundles with high-speed broadband services. However, cable operators have also been seeing increasing losses in multichannel households, even as broadband services continue to expand, and while IPTV households have grown, they only represent a fraction of total fiber broadband households.

The trend is similar among Brazil's small ISPs, which represent the bulk of fiber broadband growth in the country over the past two years. Due to the high cost of programming for smaller players, many of these providers chose not to offer Pay TV at all, focusing their marketing on streaming, with several partnering with over-the-top streaming services to bundle video content with their broadband offers.

Although OTT potential is still limited in Brazil due to low broadband penetration, speeds and infrastructure coverage, the rapid growth led by small fiber ISPs over the past two years has brought fixed broadband services to 4.3 million new households. This, coupled with the growth in 4G mobile coverage, is likely to have helped expand the adoption of streaming services. According to a recent report by Kantar IBOPE Media, 34% of Brazilians watch video-on-demand content, up from 17% in 2017, whereas multichannel penetration in the country dropped from 26.8% to 23.2% in the same period.

DTT and the urban/rural divide

Coupled with broadband expansion, a growing number of cord-cutting and cord-never households in Brazil have access to free-to-air broadcast signals with the migration of analog to digital terrestrial television. As of year-end 2018, a total 1,379 municipalities, representing 63.7% of the population, had completed analog switch-off and migrated to DTT. In the remaining 4,191 smaller towns, analog switch-off, or ASO, is targeted to occur by 2023.

Broadcaster dominates video consumption in Brazil, and access to digital free-to-air signals steadily increased between 2016 and 2018, when Brazil completed its scheduled ASO in major cities. According to the IBGE's PNAD TICs survey, DTT penetration in the period grew from 57.3% to 74.7% of total TV households in the country.

Meanwhile, in the 1,379 municipalities where ASO took place, multichannel households fell by an average of 7.3% in the 12 months after the migration to DTT, according to localized subscriber data from regulator Anatel. Between 2015 and 2019, pay TV operators lost 21.5% of subscribers in these markets, while in the remaining 4,191 municipalities, where broadcast digitization has yet to take place, multichannel adoption grew by 10.2%.

The trend reflects differences in multichannel trends across the urban/rural divide. According to the IBGE's PNAD TICs survey, pay TV adoption in rural households grew from 14.1% in 2017 to 14.9% in 2018, whereas in urban areas, it fell from 32.9% of households to 31.8%.

In non-ASO markets, cable and fixed-wireless subscriptions fell and IPTV subscriptions grew, similar to the rest of the country. DTH services, however, bucked the trend, growing 14.9% in the past four years.

In 2019, however, multichannel households fell across the board compared to 2018, even in non-ASO markets. Kagan expects this downward trend to continue in the future. Even excluding the impact of the COVID-19 pandemic, multichannel households in Brazil are forecast to decline at a compound annual growth rate (CAGR) of -3.0% over the next 10 years, with DTH leading subscriber losses.