If indices can represent passively implemented returns in a given universe, then the risk/return profiles among various indices in the same universe should be similar. In large-cap U.S. equities, the S&P 500 and Russell 1000 have had similar risk/return profiles (9.65% versus 9.73% per year, respectively, since Dec. 31, 1993). However, in the small-cap universe, the returns of the Russell 2000 and the S&P SmallCap 600 have been notably different historically. Since year-end 1993, the S&P SmallCap 600 has returned 10.44% per year, while the Russell 2000 has returned 8.78%. In addition, the S&P SmallCap 600 has also exhibited lower volatility (see Exhibit 1).

Since December 1993, the S&P SmallCap 600 has outperformed the Russell 2000 with lower volatility, resulting in a higher risk-adjusted returns. Exhibit 1 highlights the risk/return profiles of the two indices over various investment horizons.

We attribute the performance divergence of the two small-cap benchmarks to differences in the index construction. In this section, we review the index methodology and market capitalization of the two indices.

The Russell 2000 represents 2,000 small-cap U.S. companies from the Russell 3000, which is made up of the 3,000 largest U.S. companies, as measured by their market capitalization. The index is reconstituted annually at the end of June, when securities are ranked according to their total market capitalization as of the last trading day of May. No constituent additions occur other than at the June reconstitution. During the course of the year, mergers and other corporate actions often reduce the number of Russell 2000 constituents.

In contrast, the S&P SmallCap 600 implements constituent changes on an as-needed basis. To be eligible for inclusion, companies must meet market capitalization, liquidity, public float, Global Industry Classification Standard® (GICS) sector representation, and profitability measures. Constituent deletions may occur due to bankruptcy, mergers, acquisitions, significant restructuring, or substantial violations of one or more of the eligibility measures. Since S&P Dow Jones Indices does not follow a scheduled automatic approach, additions and deletions are less predictable. Exhibit 3 highlights the methodology differences between the two indices. 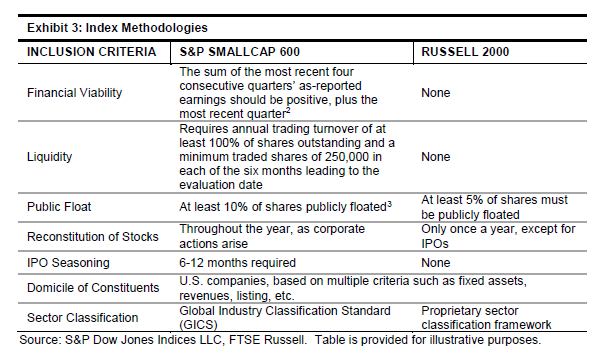 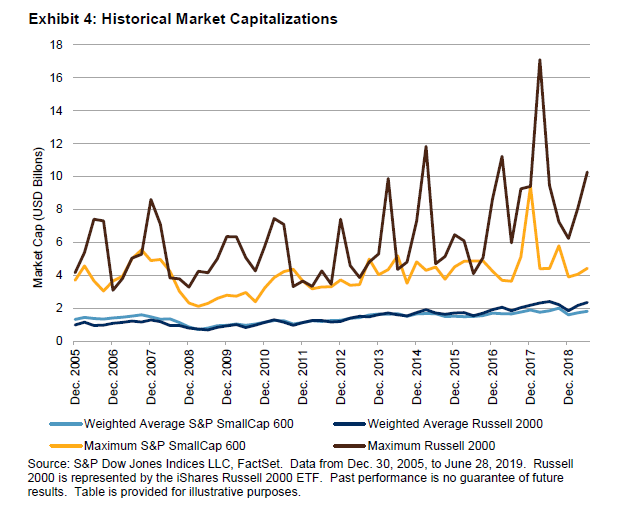 The two small-cap indices have had similar weighted average market capitalization figures over time, meaning there has been little overall difference in the sizes of the constituents. However, when we compare the market cap of the largest constituent, the Russell 2000 has had a noticeable upward bias, especially farther from the annual June reconstitution. During these months, the largest companies in the Russell 2000 could be significantly larger than the average constituent, at times entering into mid- or even large-cap territory. This could be an important consideration for market participants expecting pure small-cap exposure from the Russell 2000.

Despite the statistical significance, the June rebalancing excess return premium appears to be declining. The premium measured roughly 0.84% 10 years ago and 0.68% 5 years ago. The moderation is expected, as Russell has made enhancements to its rebalancing process in order to lessen its impact. For example, eligible initial public offerings (IPOs) are now added to the Russell 2000 on a quarterly basis. 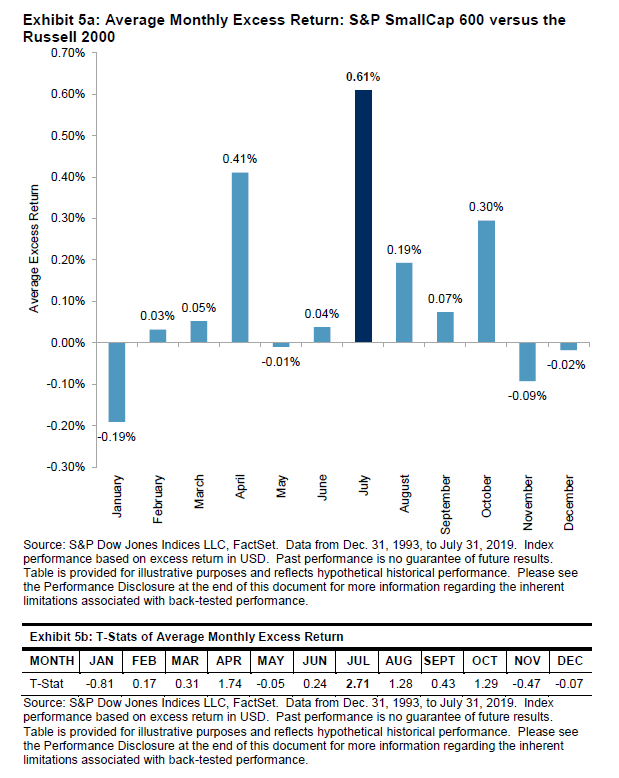 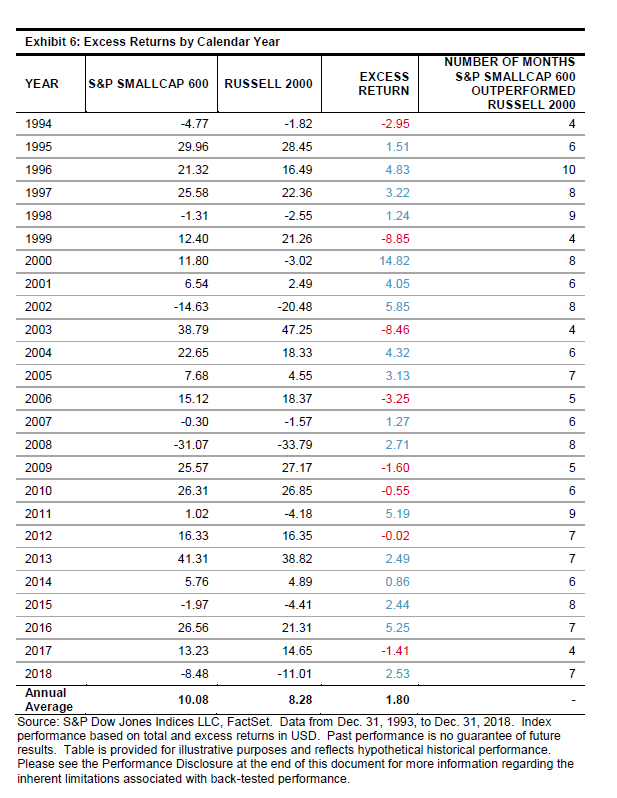 Because the S&P SmallCap 600 and the Russell 2000 differ considerably in their index construction, we examine the impact of three inclusion criteria—profitability (positive earnings), liquidity, and public float. To estimate the impact of each criterion independently, as well as jointly, we form hypothetical portfolios applying each inclusion rule. We use the S&P United States SmallCap and Russell 2000 for the underlying universes.4 Similar to the Russell 2000, the S&P United States SmallCap comprises approximately 2,400 constituents and measures the smallest 15% of the listed public equity market in the U.S. by market capitalization.

To avoid survivorship bias, we include inactive and active securities. To minimize look-ahead bias, we lag the fundamental data by 45 days. Our testing period ran from December 2002 to December 2018 due to the quality of IWM holding data improving after December 2002. The portfolios are rebalanced monthly. Throughout the analysis, we use the 91-day U.S. Treasury Bill average discount rate as the risk-free rate.

Impact of the Profitability (Positive Earnings) Screen on Performance

New constituents entering the S&P SmallCap 600 are required to have positive earnings according to GAAP for the most recent four consecutive quarters and the most recent single quarter. Therefore, we group the S&P United States SmallCap and Russell 2000 universes as follows.

Group 2: Consists of the other securities that are not part of Group 1.