The first half of the year resulted in significant credit volatility, with CDS indices playing a key role in investors' ability to manage credit exposure. As during the Global Financial Crisis, market disruption led to a surge in CDS index trading due to their ability to withstand large trading sizes. This came through in index volumes across CDX and iTraxx that were significantly greater YoY, along with large increases in tranched index trading. Interesting technical factors also emerged within the CDS indices, as index skews and curve shapes shifted during the period. The following will provide a global overview of CDS index performance across IG and HY markets in the first half of 2020, covering returns, credit events, changes in curve shape and index skew as well as the latest trading volumes.

CDS indices began the year on a calm note, spiralling downward towards the end of February due to coronavirus impact that tore through risky assets. However, extraordinary intervention by the ECB and Fed caused first half performance to land well above their maximum drawdowns, shown in the first table below. Investment grade credit outperformed high yield in both North America and Europe. However, European HY credit exhibited a stronger recovery than North American HY, with iTraxx Crossover returning 7.98% higher than CDX.NA.HY (-6.42% versus -14.40%, respectively). This rebound occurred after similar maximum drawdowns hit both iTraxx Crossover and CDX.NA.HY (-18.61% and -20.73%, respectively). Notable to the path divergence across the Atlantic is the fact of the on-the-run CDX.NA.HY index experiencing seven credit events YTD versus zero credit events for the current iTraxx Crossover index.

iTraxx Asia ex-Japan IG was the only CDS index to notch a positive first half with a return of 1.35%. Landing between IG and HY performance, CDX.EM returned -5.04% in the first half of the year on a maximum drawdown of -11.11%. 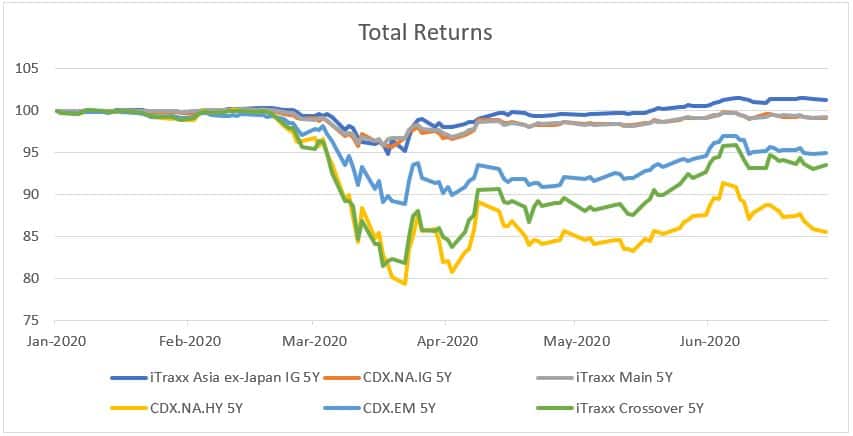 Across the CDX and iTraxx, index skews have responded differently to the volatility fuelled by the Covid-19 crisis. The index skew is calculated as the basis between the tradable index spread and the theoretical spread, constructed using the underlying basket of CDS single names. The differences in the movements of the index spreads and underlying single names can be attributed to several factors. One is the user base of the two instruments. Due to their strong liquidity, the indices are widely preferred instruments to express macro views while the single names act as effective instruments to gain exposure to idiosyncratic risk or managing counterparty risk. The indices tend to be more liquid and therefore also attract users that do not trade single names. Another factor could be that in times of market stress, specific single names could experience a one-way market leading to excessive widening of names and driving up theoretical spreads if they happen to be index constituents.

The North American and European corporate investment grade indices displayed a consistent negative skew in H1 2020, barring a very brief period in March where iTraxx Europe exhibited a positive skew. The decrease and subsequent increase in the skew were much more drastic in CDX.NA.IG compared to iTraxx Europe. This can partly be attributed to the ­­­­eight fallen angels in the CDX.NA.IG index compared to three in iTraxx Europe. 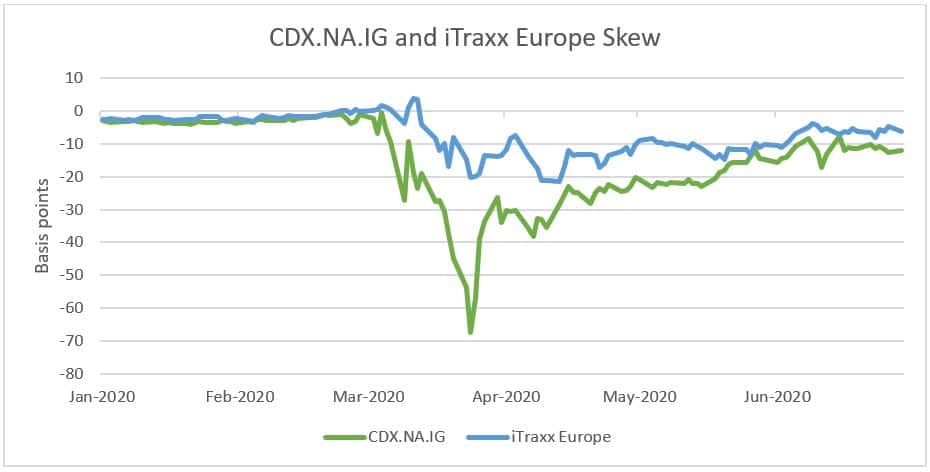 The high yield corporate indices went through bouts of positive and negative skews during the volatile months of March and April. The index skews sank to their lowest points on 25th of March, dropping to -141 basis points and -68 basis points for CDX.NA.HY and iTraxx Crossover, respectively. 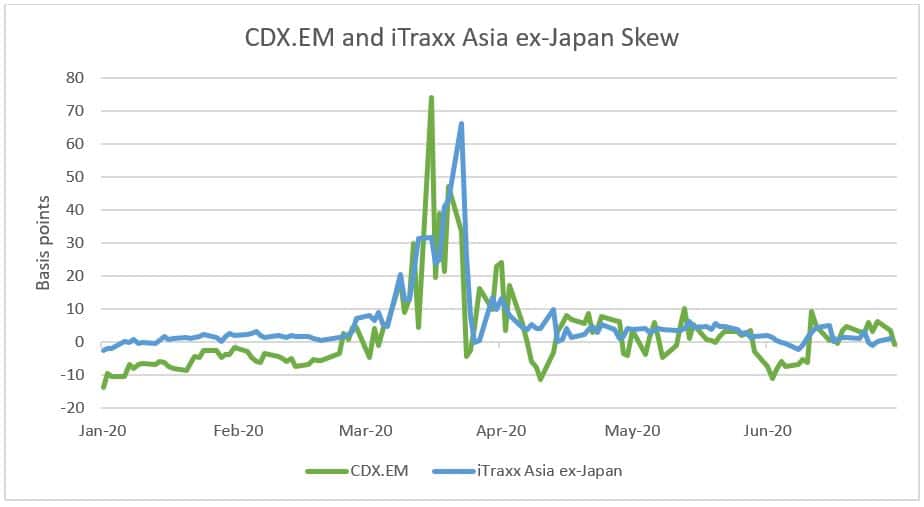 The CDS index curves give a good sense of how the market is pricing in near-term defaults relative to long-term defaults. The 5s10s curve is calculated as the 10Y spread minus the 5Y spread. A decrease in curves due to the 5Y spread widening is an indication of a higher default probability in the near-term resulting the 5Y and 10Y spreads being closer to each other.

At the onset of market volatility in the beginning of March, the CDX.NA.IG 5s10s curves dropped drastically from 48 basis points to below 20 basis points. Starting with the US credit markets entering a recovery phase following the Fed's intervention, the curves began on a gradual upward trend.

The iTraxx Europe 5s10s curve has been on a similar path, falling sharply from 46 basis points to 16 basis points. Following the ECB's action to kickstart the recovery through its EUR 750 billion Pandemic Emergency Purchase Program (PEPP), the curve has made its way back to 40 basis points at the end of H1 2020.

The first half of the year had a record number of Credit Events occur within CDX High Yield. Ten credit events occurred across CDX.NA.HY indices, seven of which occurred within the on-the-run Series 34 index. Of the names to experience credit events, 40% took place in Energy, 40% in Consumer Services and 20% in Telecommunications Services.

CDX Emerging Markets was the only other CDS index to experience a Credit Event in the first half of the year, with the Argentine Republic failing to make bond payments on May 22, after a one-month grace period on payments due in April. However, the event appeared largely anticipated, with the index price not reacting to the initial missed payment nor the failure to pay before the end of the grace period. Like CDX HY and IG, CDX EM posted its maximum drawdown on March 23, hoisted by the announcement of the Fed's SMCCF initiative. This was the second credit event for the Argentine Republic following their Failure to Pay in 2014.

The robust liquidity of CDS indices was reiterated in the wake of the Covid-19 pandemic. CDS indices were vital instruments to manage credit risk at a time when the underlying bond market liquidity was shaky at best.

The following are the H1 2020 notional traded for each index:

The solid liquidity of the CDS indices has guided strong volumes in CDS index tranches as well. The H1 2020 notional traded was USD 175 billion, which is almost 80% of the notional traded in all of 2019.

The following are the H1 2020 notional traded for tranches on each index:

The CDS indices were central to investors navigating credit instability in the first half of the year. Index volumes increased, absorbing high demand due to their high liquidity and representativeness. Further, the CDS indices launched new series towards the end of March to high demand, which was during the tumultuous market period just prior to strong central bank intervention. While the nature of the credit market in the second half of the year remains unknown, the CDS indices continue to be an efficient and cost-effective tool to navigate exposure.