We estimate 5G subscriptions comprise 6.7% and 0.2% of South Korea's and mainland China's mobile markets, respectively, as of year-end 2019.

South Korea, Hong Kong and Australia have the largest spectrum inventory in Asia-Pacific as of year-end 2019 due to recently concluded 5G spectrum auctions.

The Asia-Pacific region leaped into the 5G era with two 5G commercial deployments in 2019 — but several markets are still struggling with 4G.

We estimate 5G subscriptions comprise 6.7% and 0.2% of South Korea's and mainland China's mobile markets, respectively, as of year-end 2019. 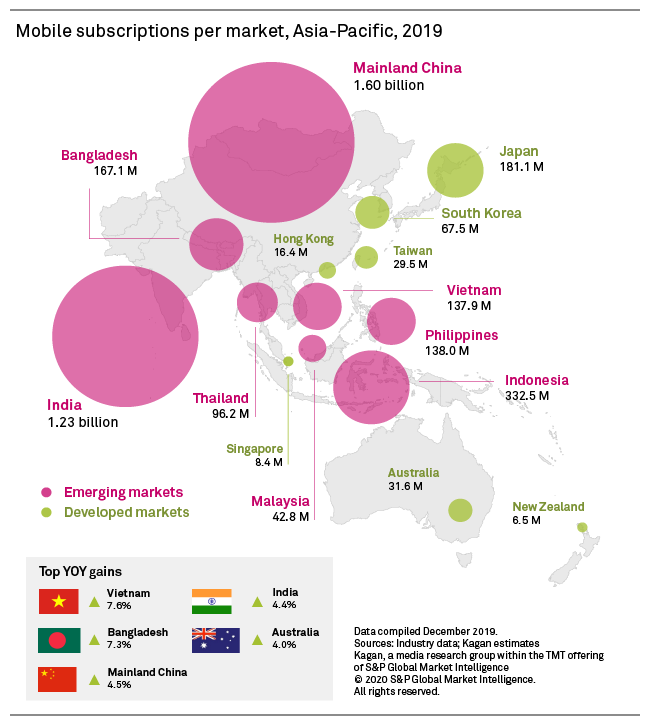 Emerging markets also top the list in terms of sub growth due to their relatively higher population growth rate and larger proportion of younger users. We expect continued uptake in mobile subscriptions from emerging markets in 2020 as local operators attempt to bridge the digital divide between their urban and rural populations.

Since emerging markets have a greater proportion of their population living in rural areas compared to developed markets, prepaid is the more dominant form of mobile usage as opposed to postpaid. 2G and 3G services also persist in emerging markets since 4G coverage remains spotty outside key urban areas.

We discussed in an earlier report how developed markets in Asia-Pacific are shutting down their 2G networks to free up more spectrum for 4G and 5G.

South Korea, Hong Kong and Australia have the largest spectrum inventory in Asia-Pacific as of year-end 2019 due to recently concluded 5G spectrum auctions in the 3.5 GHz, 26 GHz and 28 GHz bands.

To see a preview of our report on Asia-Pacific's towers and small cells, click here.

Mainland China, Japan and Thailand have revamped their rules to accommodate more MVNOs in the market. Failed operator bidders TPG Telecom Ltd. in Australia, NOW Corp. in the Philippines and MyRepublic Ltd. in Singapore have shifted gears to the MVNO scene instead.

Rakuten Inc. in Japan, Dito Telecommunity — formerly Mindanao Islamic Telephone Co. — in the Philippines and TPG in Singapore have all received licenses to operate as new mobile operators in each of their respective markets. These disruptors prompted incumbent telcos in the three markets to offer generous discounts and offers to prevent customer churn, with some even removing lock-in periods in service contracts.

Developed markets contribute a large portion of the region's aggregate service revenue in 2019, with Japan and South Korea being the largest. Mainland China still has the highest service revenue both due to the sheer size of its subscription base and the extensive value-added services offered by local telcos. 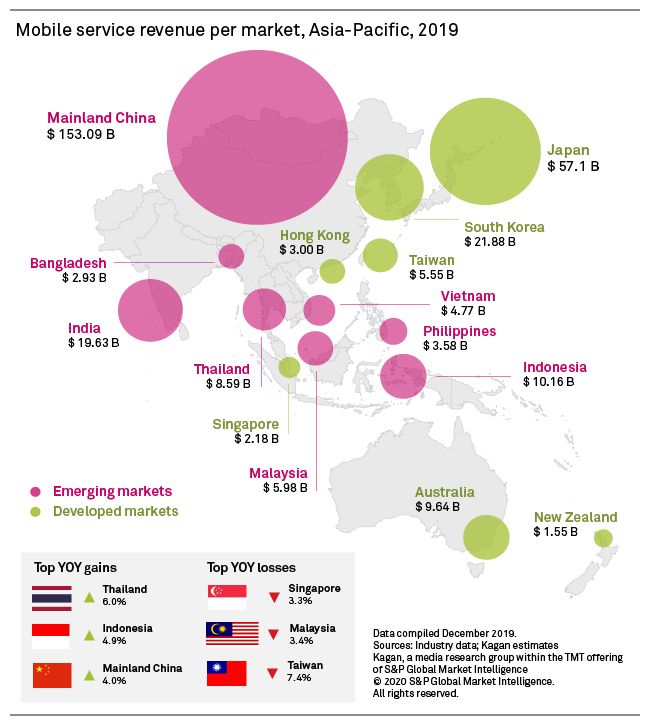 Ranking the markets by average revenue per user shows a clear divide between developed and emerging markets. South Korea is at the upper end of the list while India sits at the bottom. Indonesia and India generated some of the largest ARPU gains in 2019 due to the ongoing expansion of 4G networks in rural areas. 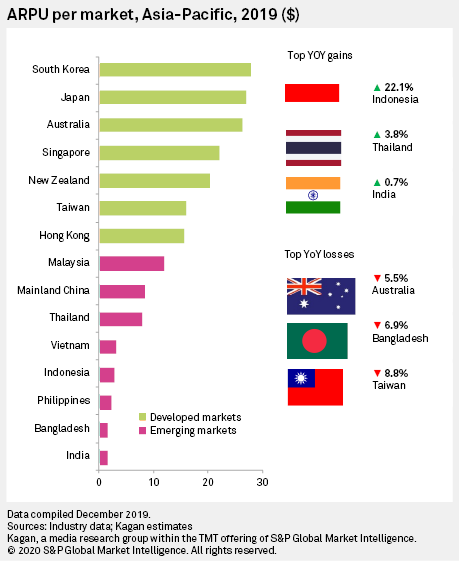 Subscribe to our complimentary TMT monthly newsletter to stay up-to-date on key industry news and insights.