As of July 2019, Kagan noted that 36 mobile operators from 21 markets worldwide have launched their commercial 5G services to business or individual consumers, either through mobile or fixed wireless services. 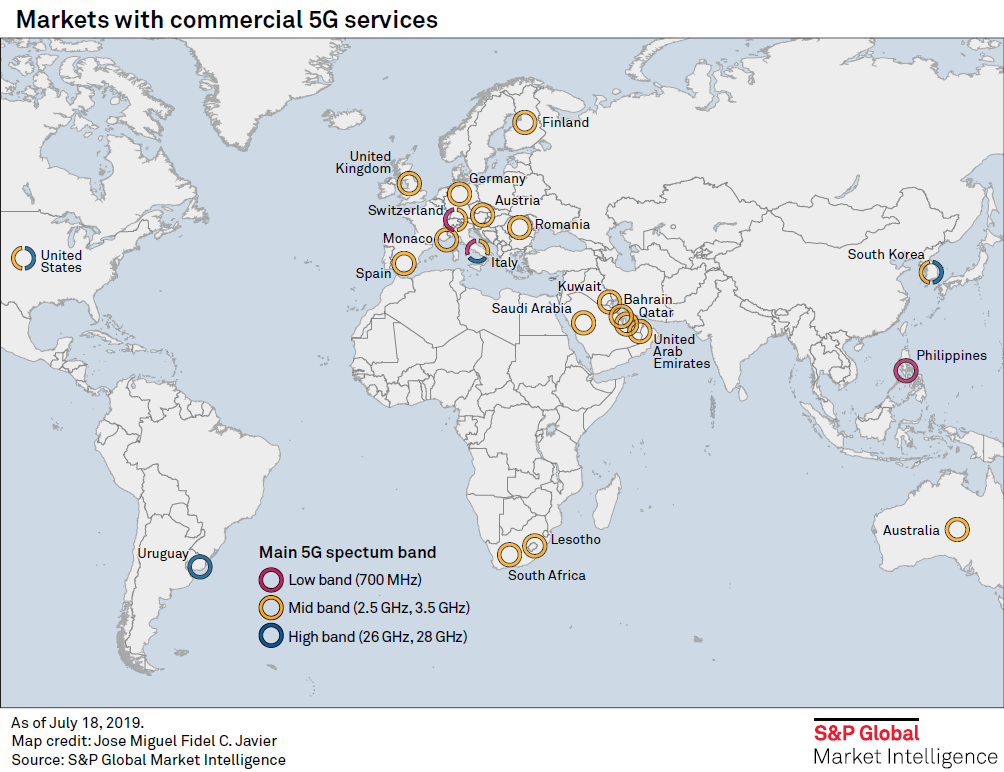 June 2019 was the busiest month so far, seeing commercial launches from 12 operators in Bahrain, Italy, Kuwait, Philippines, Romania, Saudi Arabia and Spain. Four operators in Germany, Monaco and the United Kingdom were the most recent additions in July 2019.

Similar to 2018, 3.5 GHz is still the most popular band for both trials and launches, with 30 out of the 36 operators using it as the primary band for their initial commercial services. The 26 GHz and 28 GHz bands are also popular for initial launches, especially among operators in the USA and South Korea. Apart from these, the 700 MHz and 2.5 GHz bands seem to be the new rising stars for 5G.

In the United States, Sprint Corp. is the only operator to use 2.5 GHz as its main 5G band, as Verizon Communications Inc. and AT&T Inc. both used higher bands. T-Mobile, on the other hand, announced that it would use 600 MHz for its commercial launch sometime this year and then augment it with 2.5 GHz and higher bands as necessary.

Switzerland and Italy used 700 MHz with other bands for their commercial networks, while the Philippines stood out for using the band alone. German operators have expressed interest in using the band for rural 5G coverage, but initial services run mainly on the 3.5 GHz band.

Sporting events continue to serve as testbeds for massive-scale 5G trials or launches, such as the 2019 African Cup of Nations in Egypt in June of 2019, the Southeast Asian Games in the Philippines coming in November, and the 2020 Summer Olympics in Japan in July 2020.

The first half of 2019 saw 5G networking equipment vendors making corollary gains in both new 5G trials and commercial deployments and signing memorandums of understanding, or MOUs, for the co-development and implementation of 5G networks with operator partners.

China vendors Huawei Technologies Co. Ltd. and ZTE Corp. each gained traction in the nascent 5G market. As of July 2019, Huawei touts more than 50 commercial contracts, 150,000 base stations shipped and more than 80,000 5G sites in active service. ZTE points to 25 commercial contracts and asserts more than 60 total partnerships. The ongoing success of both Huawei and ZTE is of course dependent on geopolitical factors, specifically bans on Chinese networking equipment, in some cases specific to 5G, in countries such as the United States, Australia and several European countries.

Meanwhile, Ericsson asserts 47 partnerships/MoUs and 23 publicly announced customer contracts. Ericsson’s most recent 5G customer highlight was with Swisscom AG, which is deploying Ericsson’s Radio Dot indoor solutions to accelerate its ambitious plans for 5G coverage reaching 90% of the Swiss population by the end of 2019. In addition to their own momentum in the 5G sector, both Nokia and Ericsson are poised to take advantage of the bans on Huawei and ZTE.

Furthermore, Samsung Electronics, while garnering more exposure on the consumer front with its leadership of the global smartphone market, is also a contender in the 5G networking market, albeit substantially behind the vendors mentioned above in terms of customer wins and operator partnerships. Samsung, like Nokia and Ericsson, has the advantage of not being banned for security reasons by multiple governments worldwide.