October saw across-the-board downgrades to consensus metal price forecasts, with the souring global economy weighing on sentiment and the demand outlook. Interest rates in the U.S. and Europe face further hikes to combat inflation, which is increasing the risk of a recession in 2023. This is reflected in recent downgrades to global GDP growth forecasts. China's economy remains a major cause for concern, given that it typically accounts for more than half of global metals demand. A protracted slump in the country's property sector and the government's commitment to a zero-COVID-19 policy — with no sign of changing it soon — have shackled large parts of the economy, following multiple COVID-19 outbreaks throughout 2022. Supply constraints are helping to prevent steeper price falls, however, with exchange stocks for zinc and copper at multiyear lows and robust growth in the electric vehicle market bolstering demand for battery metals. 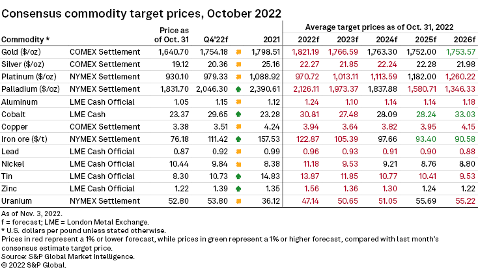 The global macroeconomic malaise deepened in October. Eurozone inflation reached 10.7%, up from 9.9% in September, as the energy component increased again month over month despite gas prices dropping to a four-month low. The European Central Bank raised its key lending rate a further 75 basis points, to its highest level since 2009, with ECB President Christine Lagarde warning of an increased likelihood of upcoming recession in the Eurozone. Eurozone GDP growth for the third quarter came in at 2.1% year over year, but the 0.2% growth quarter over quarter was a deceleration from the 0.8% increase in the second quarter.

The U.S. economy has been showing resilience, with healthy nonfarm payroll growth and a modest decline in the headline inflation rate in September. Further, the U.S. Department of Energy has awarded a $2.8 billion grant to support the domestic battery supply chain as part of the Bipartisan Infrastructure Law, hinting at increased demand for battery metals in the medium term. The outcome of the U.S. Federal Reserve meeting Nov. 2 could prove detrimental to demand, however, as the Fed raised interest rates by 75 basis points, which could accelerate the economic slowdown in the U.S.

Eyes were also on China for the 20th National Congress of the Chinese Communist Party Oct. 16-22, during which President Xi Jinping reaffirmed the country's zero-COVID-19 policy against market hopes. Ongoing lockdowns in major industrial and financial hubs have dented consumer confidence, hindered domestic economic recovery and contributed to global supply chain issues. Xi also reaffirmed Beijing's commitment to meeting previously determined carbon neutrality targets, with electrification of the automotive sector a major component that will sustain and increase demand for copper and battery metals lithium and cobalt over the medium-to-long term.

The impact of the global energy transition and electric vehicle sector growth on metal markets was a key topic among the attendees at October's London Metal Exchange, or LME, Week in London. The resulting demand boost is expected to lead to growing deficits reemerging in the markets for lithium, cobalt and copper from 2025, with prices moving sharply higher. The supply response is lagging, however, with exploration budgets well below budgets during the peak new deposit discovery years a decade ago. Near-term supply developments were also topical, including a potential ban on deliveries of Russian metal to LME warehouses and a further energy-related supply crunch for European zinc smelters. Meanwhile, there is optimism for an improvement in China's economy, linked to hope that the government will loosen its zero-COVID-19 policy in 2023, which will help bolster already strong global EV sales growth. 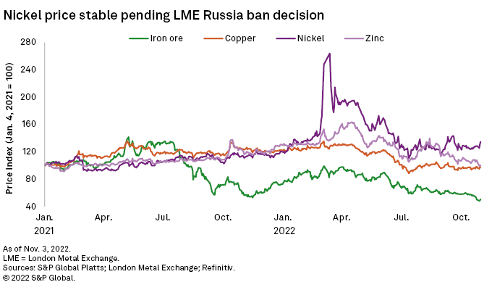 A souring global economy drove the LME zinc cash price to a year low of $2,755 per tonne Oct. 31. In previous months, the European energy crisis and declining stocks had been supporting prices, but the overall downward price trend is a result of inflation pressures, as manufacturing activity has slowed following successive steep interest-rate hikes in all major economies. In addition, China's zinc demand continues to labor under a sluggish domestic economy. Consensus zinc price forecasts were downgraded an average of 1.8% annually across 2022-26, the second-smallest average downward revision.

Since hitting a 20-month low midyear, the LME copper cash price has recovered and was rangebound in October between $7,400/t and $7,800/t, with fluctuations in reaction to market events. The manufacturing slowdown and ailing property market in China are compounded by depressed macroeconomic indicators. S&P Global Ratings has lowered its 2022 GDP growth expectations for the U.S., Germany, China and globally, while the likelihood of recession is increasing for these economies in 2023. The consensus copper price has been downgraded the most among the commodities discussed here — by an annual average of 8.1% through to 2026, with the 13.6% downward revision to the 2023 price also the largest annual downgrade this month. The copper price is nevertheless expected to average slightly above current levels in 2023.

The LME nickel cash price is at the mercy of the Russia-Ukraine conflict, with the LME currently in formal discussions on banning Russian metal deliveries into its warehouses. This uncertainty stabilized prices around $22,000/t for most of October. Nevertheless, the lower GDP growth forecasts and rising supply from Indonesia are expected to keep the nickel market in surplus, which has prompted downgrades of 4.9% and 5.5% to the consensus nickel price forecast for 2022 and 2023, respectively. 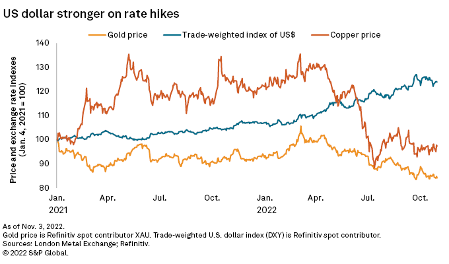 The LME cobalt cash price has held steady since end-August at around $23/pound, as weak electronics sector demand is countered by sustained electric vehicle demand. Inflation is weighing on the former, curbing consumer discretionary spending, while EV sales are being boosted by temporary subsidies and newly applied discounts on insurance, car features and overall prices. With a sizable cobalt market surplus, the price was not impacted by recent strikes in South Africa. Despite a 9.1% downgrade to the 2023 consensus price — to the lowest annual average of the forecast horizon — the cobalt price will be sustained significantly above current levels within the framework of the green energy transition.

The S&P Global Platts IODEX 62% Fe iron ore price tumbled to a three-year low of $79.50 per dry metric tonne Oct. 31, weighed down by a weak property sector in China and a sluggish domestic economy. Although Beijing plans to help the country's real estate sector, the 200-billion-yuan fund to be launched amounts to just one-quarter of the 800 billion yuan S&P Global Ratings estimates is required to ensure completion of presold homes. A resumption of construction activity would lend some support to iron ore prices, which are expected to average higher than current levels across the forecast period, supported by sluggish growth in seaborne iron ore supply. Consensus price forecasts have nevertheless been downgraded for 2022 through 2024, and by 2026, iron ore is expected to trade 43% below the 2021 average price. 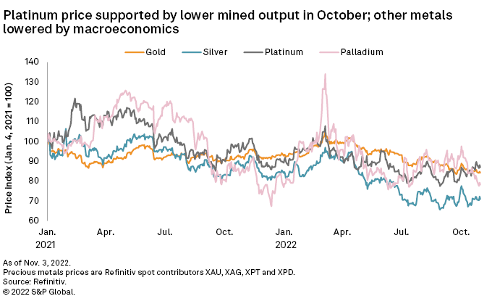 The London Bullion Market Association gold price remained under pressure in October, hitting a near year-to-date low of $1,625 per ounce midmonth before a short recovery. Prices are set to trend lower, however, subdued by the latest Fed rate hike Nov. 2. Despite a still strengthening dollar, especially against a falling euro, the average annual downgrade of 0.3% to the consensus 2022-26 gold price forecast was surprisingly the smallest among the commodities listed in the table. This makes for a range-bound price between $1,752/oz and $1,821/oz for each forecast year.

The association's silver price was volatile in October, in response to macroeconomic events. The price rallied to a three-month high of $21.11/oz Oct. 4 as silver's safe-haven status came through following a weaker U.S. dollar, rising crude oil prices and the threat of nuclear war. Although the rally was short-lived, expectations are for the price to average above current levels in the fourth quarter and across the forecast horizon, despite significant downgrades in the first half of the forecast period. The consensus silver price forecast was revised downward by 7.5% and 6.9%, respectively, for 2022 and 2023.

The palladium price trended lower during October, reaching near year-to-date lows despite an early-month rally as the LME considered sanctions on Russian metals, sparking fears of supply disruptions. By contrast, the platinum price edged upward to close October 6.9% higher than at end-September, as major producers in South Africa cut production following power supply issues. Both metals have industrial applications in the automotive sector, and in hydrogen fuel cell technology — another avenue increasingly being explored during the green energy transition and the present energy crisis. With slowed manufacturing activity and looming recession, however, the platinum and palladium consensus price forecasts have beenrespectivelydowngraded 4.0% and 4.5% annually through to 2026.

S&P Global Inc.'s economics group is separate from, but provides forecasts and other input to, S&P Global Ratings analysts.