Streaming media devices, or SMDs, are still popular entry points into the growing streaming video ecosystem, but sales growth is slowing as other hardware options stake out a larger position in the market. SMD shipments grew 2.0% year over year to an estimated 15.7 million worldwide in the third quarter of 2019.

This is Kagan's first quarterly report on SMDs, which we define as hardware with the primary function of streaming IP video to a television. Our analysis includes streaming media players and sticks, but does not include smart TVs, set-top boxes from multichannel operators or smart displays, such as Facebook Inc.'s Portal. 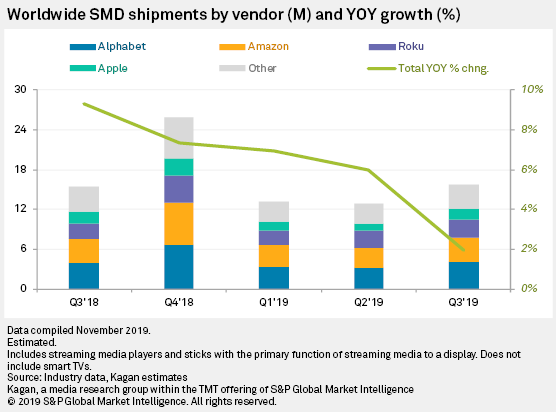 The overall SMD market is being squeezed by products with similar functionality, particularly smart TVs. Consumers are relying more on the convenience of displays with streaming capabilities baked in, and the major SMD manufacturers have been pivoting with them. Many smart TVs now run versions of the platforms that dominate the SMD landscape.