Due to the services sector’s stronger-than-anticipated performance during the first half of the year, S&P Global Ratings revised upward its full-year GDP growth projection for the region’s major economies to 5.9%, from March’s 4.9% forecast. Latin American equities have also recently enjoyed the fruits of the recovery. But credit conditions across Latin America—one of the regions that has suffered most during the  pandemic—are improving at varying degrees, according to S&P Global Ratings’ midyear corporate and infrastructure credit outlook.

Argentina’s oil and gas, power generation, and telecom and cable industries are stabilizing, while utilities, real estate, construction, and infrastructure remain fragile. Brazil’s recovery, led by commodities, is stronger than other neighboring countries’, and Latin America’s biggest economy has regained most of the losses sustained last year. In Chile, a robust vaccination strategy combined with record-high copper prices and supportive government stimulus have created the foundation for a rapid economic recovery in the country. Comparatively, S&P Global Ratings expects Colombia’s sectors to struggle for longer, as most will likely remain below precrisis metrics this year. Mexico’s rising number of coronavirus cases may not impede the country’s credit recovery, as two-thirds of rated Mexican corporations are expected to return to pre-pandemic levels by next year.

The most pressing uncertainty awaits in the region’s forthcoming political influences.

"There has been a general anti-establishment sentiment across Latin America and the [COVID-19] pandemic has probably accelerated that shift," Nikhil Sanghani, Latin America economist at Capital Economics, told S&P Global Market Intelligence. "There's a general sense of people wanting some sort of change."

Banks including Banco Santander and Banco Bilbao Vizcaya Argentina have been monitoring the shifting political currents in Latin America to watch for market developments that may affect their businesses. Argentina’s upcoming midterm elections, set for Nov. 14, could create more obstacles around policymaking—that may weigh on corporate credit conditions—if the outcome is more fragmentation across party lines. Brazil’s uncertain political arena is unlikely to stall the country’s recovery, according to S&P Global Ratings. In Peru and Chile, economically valuable mineral exploration and mine development spending could move elsewhere due to the rise of left-wing nationalist politics and the potential for higher taxes in these two countries, industry experts told S&P Global Market Intelligence. A new constitution in Chile, which could materialize by mid-2022, may broaden access to education and public health while raising corporate costs.

Today is Monday, August 23, 2021, and here is today’s essential intelligence. 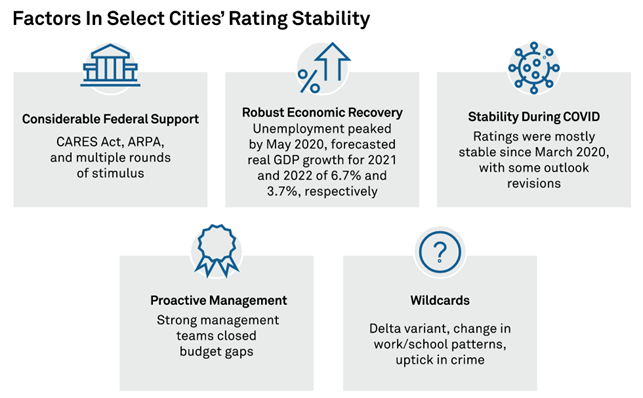 Although COVID-19 had a significant effect on major U.S. cities, strong management conditions and considerable federal support prevented credit deterioration. The sudden stop recession was shorter, and the economic rebound stronger, than anticipated, leading to more robust revenue for local governments than originally expected. Unprecedented federal relief was a lifeline and abated liquidity pressure. Current challenges for big cities include the delta variant, changing work/school patterns, and an uptick in violent crime.

Asia-Pacific's private insurance technology landscape may be dotted with several unconventional startups seeking to unseat incumbents, but venture capitalists will gravitate toward less disruptive and more collaborative technology startups. Investors are mostly backing digital marketplaces that drive business to existing carriers, according to S&P Global Market Intelligence's analysis of 56 APAC insurtechs that disclosed at least $10 million of capital raised via private placement deals. About 25 brokerages raked in nearly $2 billion in the region, accounting for more than half of the aggregate amount raised by the companies in the review.

Diving into cryptocurrencies requires learning a new language involving terms like public and private keys, hot and cold storage, Ledgers and Trezors, and seed phrases. Beyond the jargon, the market is finding many ways to buy, trade, and hold crypto, and innovation is accelerating. As with any market advancing this quickly, the infrastructure is also progressing to confront issues such as evolving regulations, young technology, unfamiliar risks (potential for hacks, lost keys, etc.), and the need for operational and IT security. It is a diverse and complex market, and it can sometimes be difficult to navigate. One particular logistical challenge is cryptocurrency custody. For institutions, choosing a fit-for-purpose custody solution is paramount to their success and competitiveness in this space. 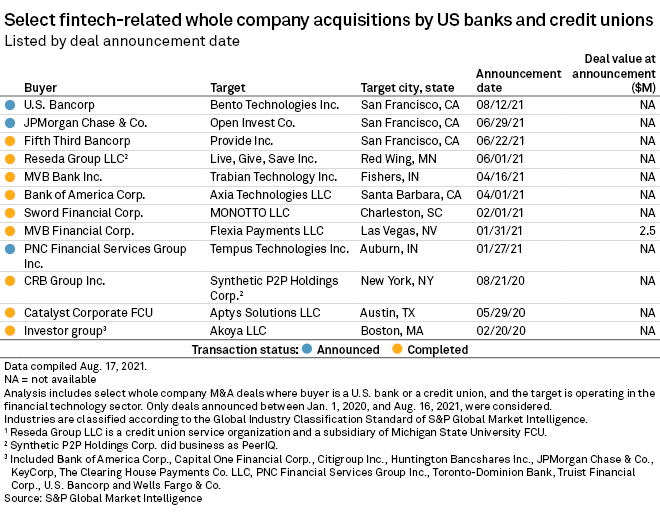 More and more leading fintech companies are growing out of the size that banks can digest as potential acquirers, keeping competition between traditional banks and disruptors as healthy as ever. Large commercial banks have snapped up several fintech companies in recent years, but few deals have been large enough to warrant disclosing a value. Market observers cite several reasons why fintech targets have tended to be smaller, in contrast to a wave of billion-dollar M&A activity among traditional banks.

Exhibitors eagerly saw moviegoers return to their local theaters in the second quarter after many months of closures and false starts. But with a resurgence of pandemic-era health risks and new distribution strategies on the part of studios, there remains little certainty about the business of tomorrow. 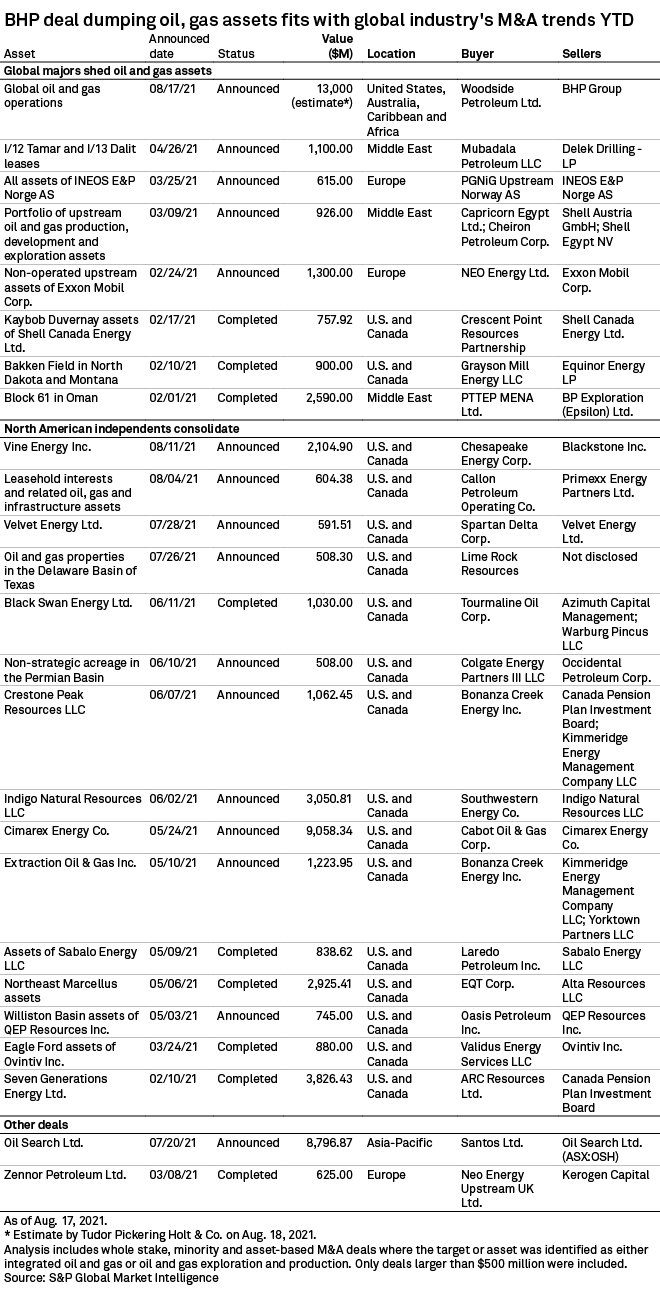 Global oil companies are reducing their greenhouse gas emissions profiles by selling off their carbon-intensive assets, an S&P Global Market Intelligence analysis of M&A data found Aug. 19. In the U.S., the M&A train runs on the opposite track. U.S. independent exploration and production companies, or E&Ps, are buying up rivals and neighbors to consolidate their oil and gas positions, especially inside plays from Pennsylvania's Marcellus Shale to Texas' Permian Basin. 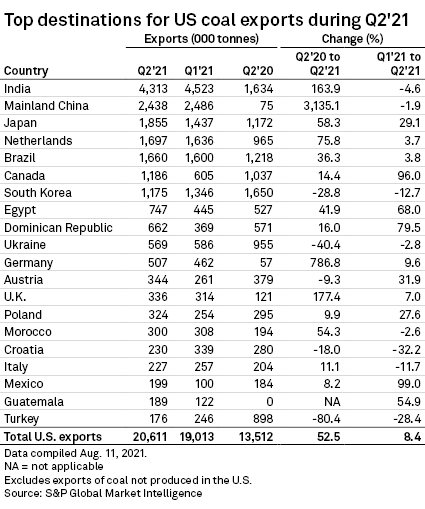 U.S. coal shipments to China leaped more than 30-fold in the second quarter, as miners took further advantage of the Asian powerhouse's prolonged trade dispute with Australia. Deliveries surpassed 2.4 million tonnes compared to just 75,000 tonnes a year earlier, according to an S&P Global Market Intelligence analysis of industry data. The surge fueled a 53% jump to 20.6 million tonnes in U.S. coal exports, along with rebounds in India, Japan, Brazil and most other major markets following 2020 pandemic slowdowns.

China To Continue With Its Metal Stock Release Program To Support Prices: Report

China's National Food and Strategic Reserves Administration will continue to release metal stocks from the state reserves to ensure stability of commodity prices, according to a report released by the administration on Aug. 19. The move is aimed at softening cost pressure faced by small- and medium-sized downstream processors for aluminum, copper and zinc. The response comes at a time when market was abuzz with chatters indicating there could be a temporary halt in plans to release metal stocks.

India's LNG demand could rebound to pre-COVID-19 levels by early 2022 as its economy recovers, provided spot LNG prices soften and the country is able to repel any subsequent waves of COVID-19 infections, according to officials from the oil and gas ministry, and gas company executives. The South Asian country has emerged as a key participant in the LNG market place and despite being price sensitive, it has set the floor for spot LNG prices by picking up cargoes every time prices begin to drop.