Investors are mostly backing digital marketplaces that drive business to existing carriers, according to S&P Global Market Intelligence's analysis of 56 APAC insurtechs that disclosed at least $10 million of capital raised via private placement deals. About 25 brokerages raked in nearly $2 billion in the region, accounting for more than half of the aggregate amount raised by the companies in our review.

Tech vendors streamlining existing carriers' back-office operations are the second-largest in number, at 21, although they accounted for only 15% of the total amount raised. Growing competition in the online intermediation space, especially in China, could prompt investors to focus on less crowded and more profitable niches. We believe the vendor model will gain more investor attention as a result.

Regulatory restrictions on the issuance of carrier licenses in the APAC region will limit growth in the number of tech companies seeking to both underwrite and sell policies. But the small number of existing digital carriers will see a growing share of the aggregate amount raised by insurtechs, thanks to their high capital needs. We believe digital carriers that embrace both offline and online distribution channels will see faster growth.

On the lowest end of the spectrum is the digital agency category, which accounted for only 4% of the aggregate amount raised by insurtechs. Tech companies operating as agents typically offer policies with their branding and work with only a handful of carriers. 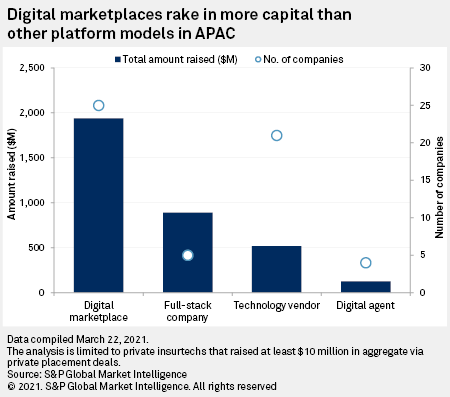 Big technology companies like Tencent Holdings Ltd., Ant Group Co. Ltd., Amazon.com Inc. and Grab Holdings Inc. will influence the insurtech ecosystem in the region, thanks to their role as investors, partners and competitors. For technology startups chasing consumers online, collaborations with popular lifestyle and e-commerce platforms could be important for scale.

China and India are collectively home to nearly half of private insurtech companies in the APAC region and attracted about 78% of the investments. The two markets will continue to corner the lion's share of investor interest, thanks to their large and fast-growing insurance markets. 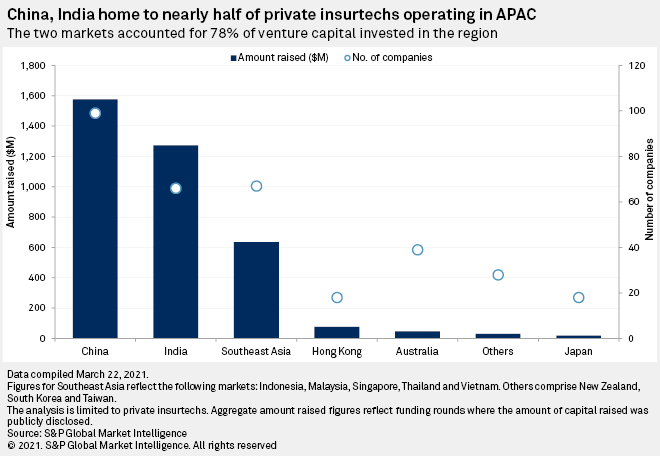 The threat of wide-sweeping disruption in insurance has yet to manifest in the region. For instance, in China, which is the second-largest insurance market in the world, online sales represented only 6.43% of the overall insurance industry premiums in 2020, according to the data released by the Insurance Association of China. But the share of internet insurance premiums is rising in the market.

We counted 67 insurtechs in Southeast Asia, including 37 in Singapore, 11 in Indonesia, nine in Malaysia, eight in Thailand and two in Vietnam. Australia has 39 insurtechs, and Hong Kong and Japan each have 18 insurtechs. 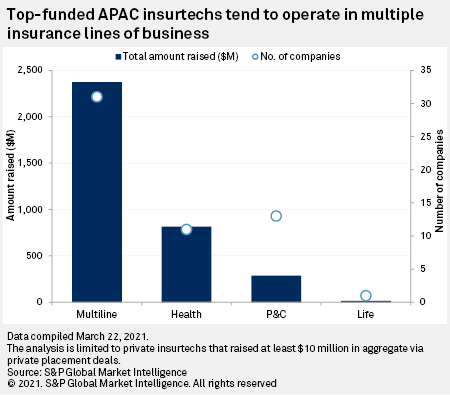 Our detailed study focused on startups that raised at least $10 million, comprising 56 companies. We segmented these companies based on their sector focus, platform and distribution models.

Full-stack tech companies that originate and retain insurance risks are few and far between in the region, thanks to the limited supply of insurer licenses. In contrast, the U.S. insurtechs have greater flexibility to create a full-stack structure, subject to regulatory capital requirements, by establishing a carrier on a de novo basis or through the acquisition of entities that are already fully licensed.

Our review found at least five full-stack companies, which collectively raised nearly $890 million. Two of them are in India, two in Hong Kong and one in Singapore.

Full-stack companies controlling both manufacturing and distribution of insurance products pose the biggest risk to traditional players operating in the insurance value chain: carriers and human intermediaries. The use of technology to control risk selection and underwriting, sell policies, and provide claim services distinguishes digital insurers from incumbents.

China was perhaps among the first markets to award an online-only insurer license. ZhongAn Online P & C Insurance Co. Ltd., which now trades on the Hong Kong Stock Exchange, was approved in 2013 to become a carrier that accepts business through digital-only channels.

Two of the fastest-growing full-stack companies are only partly digital. Go Digit General Insurance Ltd. in India and Singapore Life Pte. Ltd. in Southeast Asia have adopted omnichannel strategies, allowing consumers to sign up for policies through their websites and offline networks such as agents.

The multi-channel strategy has allowed the two companies to achieve rapid scale. Insurance carriers cannot disregard offline channels, especially for selling complex products such as universal life insurance in the region. Life insurance is generally considered a push product as consumers do not proactively seek life policies. Further, consumers typically lean on advisers to take them through the fine print of high-premium policies.

Launched in 2017, SingLife grew its annual gross written premium at a compound annual growth rate of nearly 200% to S$142 million in 2019 from S$16 million in 2017. The company is set to grow much bigger thanks to its acquisition of Aviva's Singapore operations in late 2020. The merger of the legal entities awaits court approvals.

A comparison in the scale of the operations of Go Digit and Acko General Insurance Ltd. in India illustrates the superiority of the hybrid strategy compared to the digital-only channel.

Both Acko and Go Digit received insurer licenses in 2017 and have so far raised more than $200 million. Acko does not accept business from offline channels and recorded gross written premium of only 3.58 billion rupees for 11 months ending February 2021, whereas Go Digit with its omnichannel strategy saw gross written premium of 20.89 billion rupees for the same period.

While SingLife and Go Digit may not be the archetypal examples of digital insurers, their digital tools enhance the offline sales process and speed up the claim settlement.

Among insurtechs that raised at least $10 million, about 45% operate as digital marketplaces offering a transparent way to compare coverage and price options among different providers.

The digital marketplace model, however, is quickly evolving, especially in China, where digital brokers like Xiaobang Guihua are adding advisory features. Xiaobang Guihua recommends insurance products via its WeChat public account as well as through a stand-alone app.

A small number of insurtechs have chosen the digital agency model. Digital agents act on behalf of just one or two insurers per vertical and may often serve as the digital touchpoint for the customer. Traditional carriers might favor digital agency relationships if the technology partner's data predictions and risk profiling of customers help lower loss ratios.

A growing number of technology startups do not chase insurance consumers online and instead provide hardware, software and analytics to carriers, brokers and agents. They provide solutions that assist incumbents in customer onboarding, claims processing and other internal functions.

We tracked about 21 technology vendors in the region, 17 of which are based in China. Among notable companies outside of China, Singapore-based CXA Group Pte. Ltd. provides white label solutions for corporates, small and medium businesses to help employees pick health coverage and manage claims. The company, which operates in China and Southeast Asia, is selling its brokerage business to focus on its software-as-a-service business.

Several insurtechs that started as simple lead-generation websites in China are now adding technology vendor models by providing risk assessment, underwriting and claims assistance to carriers. Publicly listed digital broker Huize Holding Ltd. illustrates this trend among digital brokers in China, which leverage their vast troves of data to work with insurers to customize policies for their users.

For several digital underwriters and intermediaries operating in the region, China-based Zhong An appears to be a source of inspiration. The publicly traded digital insurer pioneered the concept of embedded insurance in the region by partnering with popular consumer technology platforms. Bundling short-term, inexpensive policies with digital transactions made on e-commerce and ride-hailing platforms allowed ZhongAn to achieve rapid scale in a short time.

In this model, large digital conglomerates with loyal userbases become the distribution channels. Insurtechs can sell policies directly to millions of their users. Dependency on big techs, however, brings its own risks. While consumers may recognize the insurtechs as providers of the coverage, big tech partners will continue to wield influence over the larger customer relationship. Commissions charged by big techs could weigh heavily on the profitability of insurtechs.

Tencent's online distribution platform, known as WeSure, allows users to make insurance inquiries, purchases and claims directly on its instant messaging and lifestyle platforms, WeChat and QQ. WeSure works as an agent for MetLife, Inc., AXA and Ping An, among others. The digital conglomerate is also a significant partner for insurtechs in China. We counted at least three insurtechs in which Tencent holds a stake: Waterdrop, Qingsongchou and Xiaobang Guihua. Besides, several Chinese insurtechs primarily depend on Tencent's WeChat to conduct their business.

Amazon, which holds a stake in digital insurer Acko, holds an agency license to distribute products underwritten by the Indian digital insurer. But Acko's exclusive relationship with Amazon may not last long as the e-commerce company plans to seek a brokerage license to work with multiple insurers.

While big techs are vying to become digital intermediaries in the insurance space, established carriers are building proprietary digital channels. Startups that assist both incumbents and big techs in making this transition will likely emerge as winners.