FIFA World Cup 2022 gets underway in Qatar in November, and FIFA president Gianni Infantino expects that it will reach 5 billion people across all platforms. Thirty-two qualified nations will compete in a competition that transcends the entire technology, media and telecommunications sector. Broadcast, cable, mobile and satellite systems will transmit live video, voice and data to 219 markets, allowing TV and media groups to curate the content that entices global advertising brands. HDR, 4K, 8K and virtual reality video technologies will enhance viewer experiences while a connected ball and semi-automated offside technology will be used for the first time. As the event's huge global audiences set the stage for memorable sporting achievements on the field, off the field there are commercial and reputational opportunities across the entire technology, media and telecommunications sector.

Qatar 2022 is expected to generate $6.5 billion, surpassing all previous tournaments and at four times the figure seen in Korea and Japan in 2002. The federation operates as custodian of the game, with all income distributed back into the sport. Expenses consist of event-related costs, development payments to member nations, governance and other administration costs. Financial planning considerations span four-year cycles with the bulk of activity occurring in a World Cup year. 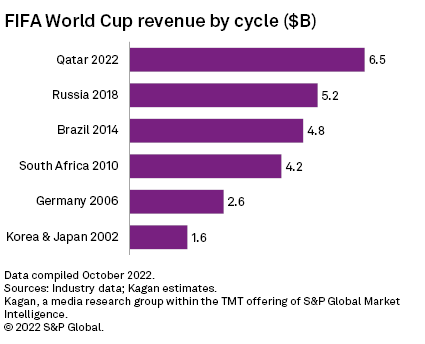 Analysis of the last complete four-year World Cup cycle that led up to Russia 2018 shows that just under half of FIFA revenue came from broadcasting rights fees. An additional 26% came from marketing rights with sponsors signing contracts to associate with the event. Hospitality and ticket sales brought 11%, illustrating that media exposure and a global affinity with the sport drive overall revenue. 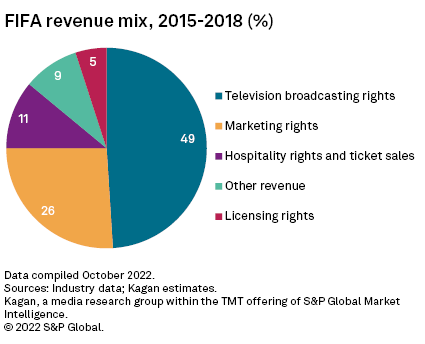 S&P Global Market Intelligence Consumer Insights survey results had soccer as the most popular sport for live TV viewing in eight of 10 major global markets and in the top three for nine markets: see chart below. The U.S. was the exception due to the mass popularity of the big three national sports: American football, baseball and basketball, but the popularity of the game continues to increase within the largest media market in the world in revenue terms. 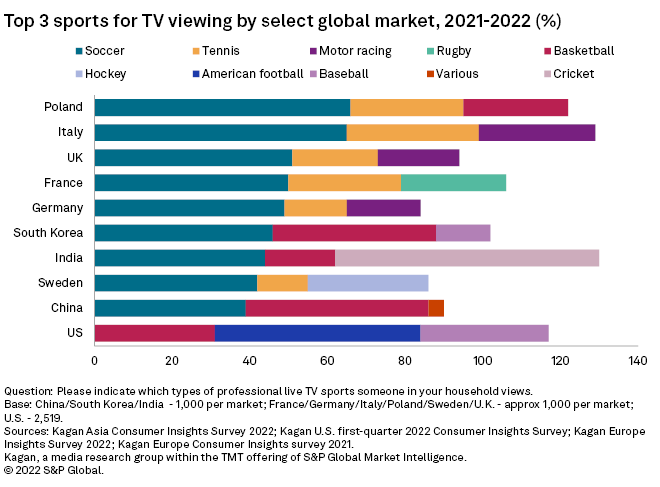 Media: the outstanding ad opportunity of the year

World Cup 2022 will be the first time the event has taken place during fourth calendar quarter. The scheduling is due to the extreme weather conditions in Qatar during June and July, the months in which the tournament is typically held. This delayed scheduling means that matches will be taking place within the most lucrative TV advertising period of the year. The fourth quarter traditionally outperforms all other quarters across most markets as major campaigns target the holiday period when high levels of consumer goods transactions occur. In fact, many campaigns will have World Cup or soccer-based themes, even for advertisements placed outside of live games or on TV channels that do not have any rights, with creative concepts attempting to capture the excitement of the tournament.

The event has sold to pay TV and free-to-air channels throughout the world. However, in many markets, particularly Europe, legislation is in place to ensure games involving the home nation are available free-to-air. In the U.K., public broadcaster BBC, which does not schedule commercials, will share the tournaments rights with its commercially focused local counterpart, ITV, which will be selling ad inventory. German public channels ARD and ZDF will show the games and adopt a policy of only selling low levels of advertising.

Time zones are another consideration for advertisers and media partners. Qatar is only one to two hours ahead of most European nations, although at the time of the tournament it will be eight hours ahead of Eastern Time and 11 hours ahead of Pacific Time in the U.S. This means that when England takes on the U.S. on Nov. 25, audiences in England will watch the game in prime time at 7 p.m., while in the U.S., the game will go off in the morning. This scheduling influences viewing levels and consumption at a platform level as many will opt to watch on a mobile device with the game taking place during work hours.

Overall, television is the largest beneficiary during the World Cup, but interactive experiences and mobile viewing mean that ad budgets will trickle down to online video and social media as well. According to Magna Global's June 2022 Global Ad Forecasts, cyclical events, which include the U.S. midterm elections and the World Cup, have boosted projected year-over-year global advertising growth for TV alone to 3.9%, from 2% in their absence. However, their absence in 2023 means linear TV advertising will decline year over year by 3.7% globally. Global advertising expenditure will naturally slow down in 2023 following a year of cyclical events, economic turmoil and declining GDP performance. 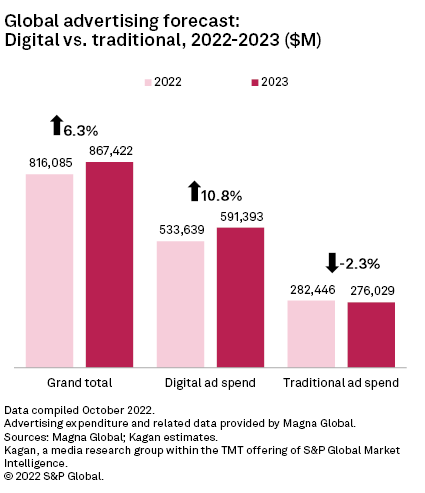 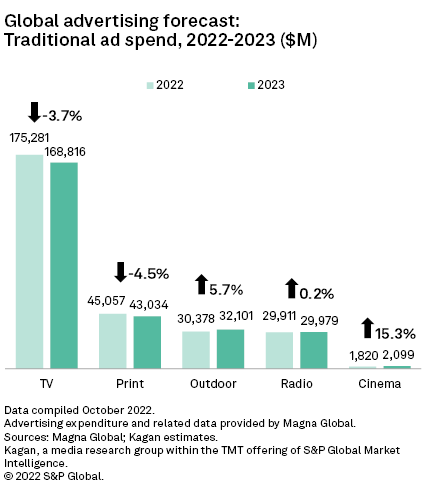 Qatar is the smallest nation by population and land mass to ever host the tournament and is the first in the Middle East. This has created infrastructure challenges including preparing purpose-built stadiums to accommodate an estimated 1.5 million spectators from abroad. The nation has also had to prepare its telecoms networks for a significant jump in mobile usage during the event, and crucially, as the host it must ensure the global distribution of media coverage is of the highest grade.

Qatar and its Gulf neighbors represented some of the earliest markets to roll out 5G, and the World Cup for Qatar has accelerated network innovation. Mobile operator Ooredoo Qatar is reported to be the first to have installed Ericsson's 4+0 MINI-LINK carrier aggregation microwave hops to support the huge expected increase in data traffic, doubling network capacity and significantly improving the 5G experience. The technology supports the ability to speed up 5G deployments reliably, cut power consumption by up to 50% and lower equipment footprint by doubling the capacity using two channels on the existing tower footprint as the radio with one channel.

Connected ball technology is another innovation for World Cup 2022. The official match balls will integrate a motion sensor, which will track every touch at a data rate of 500 times per second. The 500 Hz inertial measurement unit motion sensor is powered by an ultralight battery that collects real-time ball movement data and transmits it back to video match officials.

The flow of information from the connected ball is also supported by semi-automated offside technology, an artificial intelligence-based video review system that can detect the movement of players and accurately judge on-pitch violations. While the changes are a major advancement, they will also represent a real test for soccer's video assistant review systems, which have experienced problems ever since the technology started to be deployed in national leagues. To date, supporters have been critical of some of the technology's impact on the flow of the game as well as the way officials have used the technology to interpret vital in-play decisions.

Those without a match ticket will be well served by international broadcasters. Those wishing to get a little bit closer to the action have the option of immersive metaverse experiences using VR, augmented reality or real-time social interactions from within the stadium, which are expected to be more accessible than ever before.

Learn more about our TMT solution.

Live TV sports as popular in Asia as in US