The coronavirus pandemic has hit almost all aspects of Americans' lives, and primary elections have been the latest facet to be affected. Several states have pushed back presidential and state primary elections while others have beefed up their mail-in ballot or ballot drop-off policies.

A majority of postponed primary elections have been for the presidential elections as the bulk of state-level primaries are slated to take place during the summer months.

As of March 25, nine states have officially pushed back their primaries: Connecticut, Delaware, Georgia, Indiana, Kentucky, Louisiana, Maryland, Ohio and Rhode Island. Pennsylvania officials have reached a deal to postpone the April 28 primary election and have been working on related legislation that is poised to reach the governor's desk this week. Alaska, Hawaii, Rhode Island and Wyoming have canceled in-person voting and instead will have predominantly mail-in ballot elections. North Carolina rescheduled its congressional primary runoff election to June 23.

Several states have put forth legislation that would modify certain aspects of their respective primary elections, whether it is to push back the election or expand absentee ballot provisions.

The Democratic National Committee issued a statement March 17 urging "the remaining primary states to use a variety of other critical mechanisms that will make voting easier and safer for voters and election officials alike." The DNC lists mail-in ballots, no-excuse absentee voting, and expanded days and hours of early voting as mechanisms states could use to "protect the health and safety of the American people."

A few lawsuits have been filed against the states, specifically Ohio and Wisconsin, regarding their primary election decisions or lack thereof.

As states continue to grapple with the coronavirus, presidential primary elections that were slated to take place within the next few weeks have been postponed to a later date, but not without any controversy.

What is being deemed as a second Super Tuesday, June 2 will be the new presidential primary election date for potentially six states, bringing the total number of jurisdictions holding elections that day to 11. Currently, Connecticut, Delaware, Indiana, Maryland, Ohio and Pennsylvania will join the District of Columbia, Montana, New Jersey, New Mexico and South Dakota on the first Tuesday of June. The Ohio General Assembly recently passed legislation to reschedule the postponed election to April 28 instead of June 2. 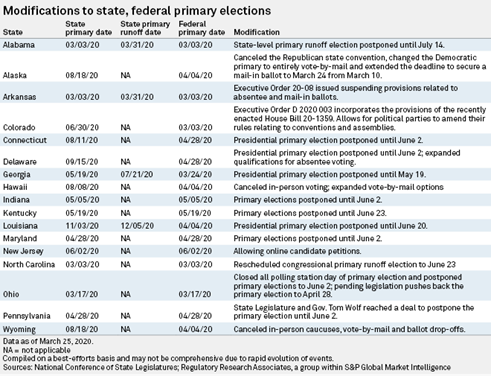 Alabama's primary runoff election was set to take place March 31; however, Republican Gov. Kay Ivy ordered the runoff election to be postponed until July 14. Secretary of State John Merrill said the postponement "will allow all local election officials the time to assess and evaluate the changes that must be made to ensure the runoff election is administered according to plan."

On March 23, the Alaska Democratic Party canceled its in-person presidential primary election and moved to an entirely vote-by-mail election. The state's presidential primary is set to take place April 4. The deadline to send in a mail-in ballot was extended to April 10.

Arkansas Gov. Asa Hutchinson, a Republican, issued Executive Order 20-08 suspending provisions of the law related to elections due to the coronavirus. The first provision suspends a state statute related to emergency polling site changes, therefore allowing counties to consolidate to as few as one polling site for in-person voting on election day. The second provision deals with a law requiring qualified voters who wish to use absentee ballots to be unavoidably absent or unable to attend an election due to illness or physical disability. All qualified voters entitled to vote in the runoff will be permitted to ask for an absentee ballot. The final provision suspends a law that requires absentee ballot applications to be sent by mail, fax or email by March 24 and allows any absentee voter who submits their application seven days before election day to receive an absentee ballot. The state's primary runoff election is scheduled to take place March 31.

Georgia's presidential primary election was postponed until May 19, the day of the state-level primaries. Georgia Secretary of State Brad Raffensperger issued a statement March 24 informing all 6.9 million registered voters that his office will be mailing absentee ballot request forms to everyone. According to Raffensperger, "[T]hose over age 65 and those with a disability can request absentee ballots for the primary and general election as well as all elections through the 2020 election cycle with this one application." Those under 65 will need to submit another application for future elections.

In Louisiana, Secretary of State Kyle Ardoin pushed back the presidential primary until June 20 to allow state offices "to continue to procure necessary supplies to put [the] state in the best possible posture to conduct elections."

Maryland's primary election has been postponed until June 2 due to concerns related to the coronavirus. Recently, the Maryland State Board of Election recommended that the state cancel the in-person portion of the election and move toward an election based on mail-in or drop-off ballots. The board published a draft plan on how to carry out the state's presidential primary election based on advice from the Office of the Attorney General and the Maryland Department of Health.

While several top-level state officials have announced modifications to their respective primary elections, legislators have been working to make legal changes to the election process as well.

In Louisiana, while the governor has pushed back the date of the presidential election, state legislators are considering a measure that would modify the state's absentee ballot provisions to permit all registered voters to use voting by mail.

In Pennsylvania, several election-related measures are advancing through the Legislature. House Bill 2367 would appropriate $40 million for the purpose of providing mail ballots to all qualified voters for the 2020 primary and general elections. Senate Bill 422 would postpone the primary election to June 2 and allow counties to consolidate polling places. Additionally, it permits county officials to begin counting absentee and mail-in ballots by 7 a.m. on election days. 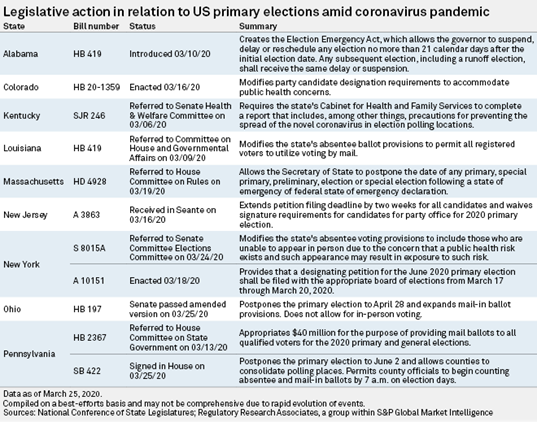 Primary elections were set to be held in Ohio on March 17; however, the night before, Ohio Department of Health Director Amy Acton issued an order requiring all polling station be closed to "avoid the imminent threat with a high probability of widespread exposure to COVID-19 with a significant risk of substantial harm to a large number of the people in the general population, including the elderly and people with weakened immune systems and chronic medical conditions." Republican Gov. Mike DeWine then announced that Ohio Secretary of State Frank LaRose would "seek a remedy through the courts to extend voting options so that every voter who wants to vote will be granted that opportunity."

The order follows DeWine's attempt to postpone the elections earlier that day; however, since the Legislature is suspended and DeWine is unable to postpone the elections unilaterally, he supported a lawsuit brought before the courts in Franklin County. The Franklin County judge, Richard Frye, ruled against the plaintiffs and denied the request for a temporary restraining order. Early March 17, in a separate case, a panel of four judges from the Ohio Supreme Court upheld Acton's decision to postpone the primaries and close the polls.

LaRose indicated that the primary election would be held June 2. The day the primaries were to take place, the Ohio Democratic Party filed a lawsuit with the Ohio Supreme Court against LaRose and his decision to set a new primary date, stating that only the General Assembly has the legal authority to set a new date. The lawsuit also asks to require Ohio's Boards of Election to accept and count all valid absentee ballots postmarked on or before April 28. The lawsuit is ongoing.

On March 25, the Ohio Senate and House of Representatives passed the amended substitute of House Bill 197, which provides for several emergency relief provisions, including rescheduling the primary election to April 28. The measure extends absentee voting by mail to April 28 and authorizes funding to pay associated costs. The bill will head to DeWine's desk, who is expected to sign the measure.

DeWine issued a statement saying, "This bill will ensure continuity of government, extended mail-in voting for our primary, clarity for schools and students, relief to workers impacted by COVID-19, and measures to make sure we are prepared to help Ohioans get back to work when this pandemic subsides. I applaud the collaborative work on this bill and look forward to signing it soon."

On March 24, the City of Green Bay, Wis., filed a lawsuit against Gov. Tony Evers, the Wisconsin Elections Commissions and the Wisconsin Department of Health Services with the U.S. District Court for the Eastern District of Wisconsin. The lawsuit is requesting a temporary restraining order and preliminary injunction "to address the proper procedures for the April 7, 2020 election given the current state of affairs." The city claims that "despite mandates from state officials and health care practitioners to socially distance and to prevent contact with others as much as possible," the state is endangering the public health in the name of holding an in-person election.

The city is asking the court to cancel the in-person election and for permission to conduct a mail-in ballot election. Additionally, it seeks to extend the deadline for registering to vote electronically or by mail to May 1 and to establish June 2 as the deadline by which municipal clerks must have counted all returned mailed ballots.

A scheduling conference in the case is to be held March 26.