May. 21 2018 — A recent analysis of 2018 state of the state addresses found a focus on the shift to cleaner energy sources and technology, seen by a number of governors as an economic opportunity for their respective states.

Each year, typically before the start of a legislative session or right after, the nation's governors give state of the state addresses before their state legislatures, highlighting the fiscal condition of the state, the prior year's accomplishments and successes, upcoming priorities for the new year, and broad policy proposals.

As part of these addresses, several governors outlined specific energy and water policy initiatives, while others provided a general energy policy direction, according to an analysis of each governor's remarks conducted annually by the RRA team. Renewable energy sources, climate change, infrastructure, energy storage, and energy affordability were some of the more prevalent themes this year.

As costs associated with renewable energy and distributed energy technologies have continued to decline and a focus on climate change shifted from the federal government to corporations, cities, and states in 2017, governors around the country spoke to efforts underway to capitalize on a shift away from fossil fuels and centralized power sources. A transition to cleaner energy sources is also being viewed as an economic opportunity, and governors have begun to convey that message as well, as seen in Colorado and Hawaii. The governors of other states, such as California, New York, Massachusetts, Connecticut, and Vermont, have tied clean energy goals to efforts to deaccelerate climate change and increase resiliency. 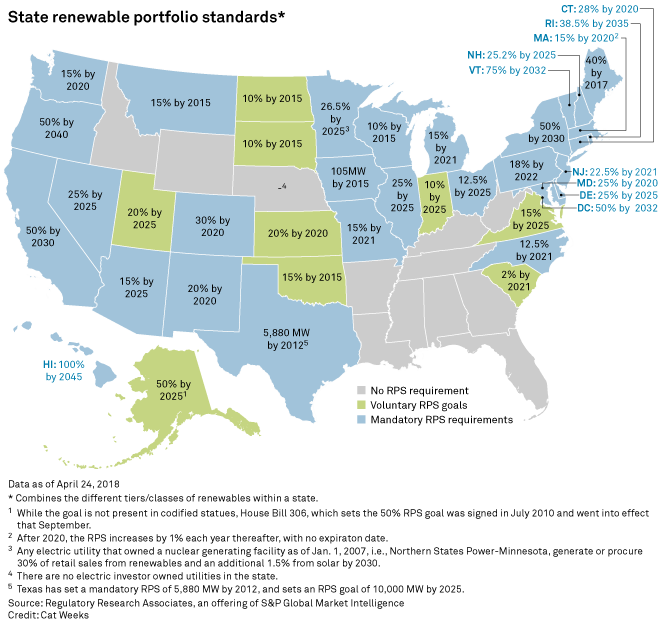 In addition to increasing renewable portfolio standards, a number of states have set energy storage goals. In New York, Governor Andrew Cuomo in his address called on the state to increase its storage target of 1,500 MW by 2025. Since then, legislation has been introduced that would require the New York Public Service Commission to establish by order, rules and regulations, for both a state energy storage goal by 2030 and a deployment policy to support the goal by December 31, 2018. And in Massachusetts, Governor Charlie Baker offered updates on the state's energy storage investments; a measure under review in the Massachusetts House would increase its energy target to 1,766 MW.