More fundraising dollars have been raised by candidates in this election than in any prior midterm election prior, and with a heightened political environment this year and many big-ticket issues and advocacy items being considered by voters, TV advertising will be plentiful as we near Election Day.

* Political fundraising from both major political parties and their respective political action committees, or PACs, is at a record level for a midterm election. A majority of the fundraising dollars will be spent on advertising leading up to Election Day in hopes of swaying voters. Broadcast TV is still the largest beneficiary of this spending surge.

* Issue and advocacy ad spending has been one of the biggest drivers of political advertising in this election, with California bringing in the largest total political number when compared with other states.

Spending from the major political parties is up across the board with House candidates spending about 30% more this election when compared to 2018, and Senate candidates have more than doubled their spending over the same period, according to OpenSecrets' analysis of federal campaign finance data files with the Federal Election Commission through Sept. 20. 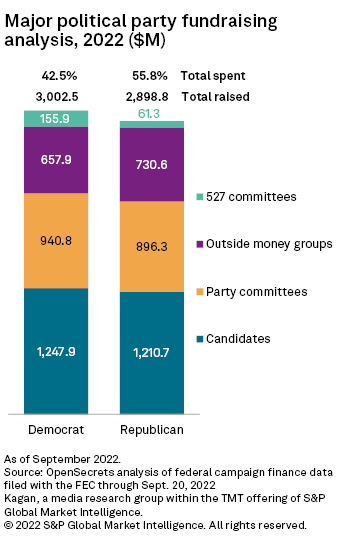 With the lion's share of political advertising still going to TV, the major broadcasters with the most stations located in competitive states are likely to see the largest windfall of the revenue segment by year-end. According to our TV station database, the stations with the most big-four TV stations in states with competitive Senate races are Nexstar Media Group Inc. with 24 stations, Gray Television Inc. with 24 stations, and Sinclair Broadcast Group Inc. with 21 stations.

Nexstar said during its second-quarter earnings call that political ad revenue was up 80% over pro forma second quarter of 2018, and the segment was pacing up 40% over 2020 year-to-date levels. On a non-pro forma basis, political ad revenue was up 174.1% in the second quarter and up 169.9% in the first half over the same period in 2018. President and COO Thomas Carter said during the call that Nexstar benefited from key races and competitive primary races for Senate seats in Ohio and Pennsylvania and gubernatorial races in Illinois, New York, Pennsylvania, Ohio and Alabama.

On the second-quarter earnings call, Gray TV Executive VP and COO Robert Lawrence Smith said that many competitive races for House and Senate have been in areas where Gray owns local stations including the states of Georgia, Nevada, Arizona, Wisconsin and Missouri. "Now for the first time in many places, we are able to offer statewide scale to political advertisers, which helps to decrease their transaction costs and helps increase the shares that we receive from their advertising orders," said Smith. Gray raised their guidance for full-year political ad revenue from $575.0 million to $652.0 million, about the same political revenue that it brought in during the 2020 presidential election. 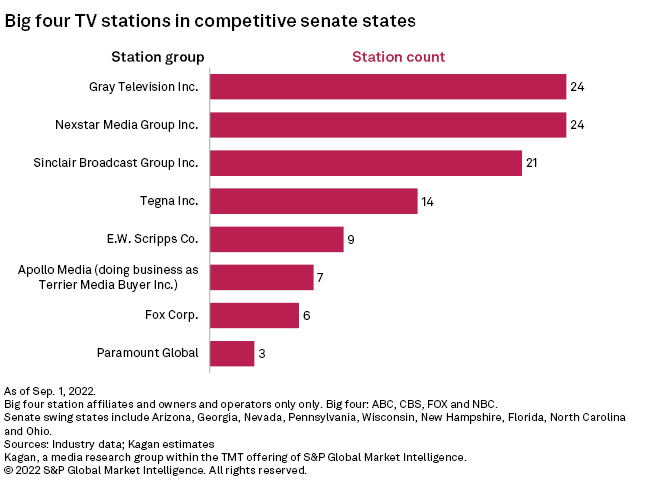 Congressional, gubernatorial and local races also bring in a large among of political ad revenue across the nation. According to Kantar Media estimates during the Television Bureau of Advertising's Forward Conference on Oct. 5, a competitive mayor's race and ballot measures in Los Angeles brought in over $252.6 million in political ad revenue, the most of a TV market in the U.S.

Additionally, California leads the nation in political ad spending with over $500.0 million, with ballot measures making up about 75% of that amount or $371.0 million. Highly funded propositions 26 (limit gaming in California to just the Native American casinos and racetracks) and 27 (allow online gaming in California and with backing from DraftKings Inc., FanDuel Inc., MLB) are buying up advertising throughout the state. 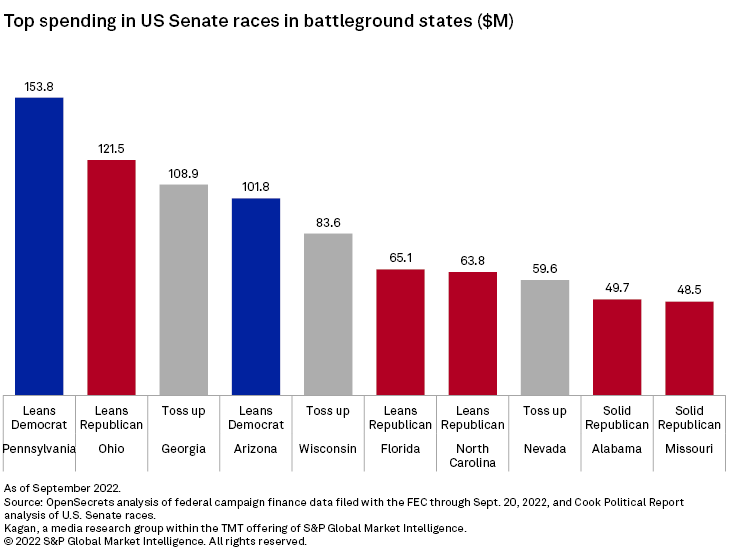 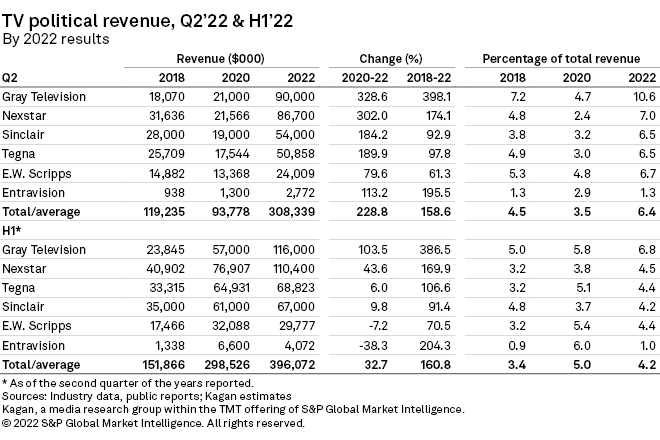