The U.S. property and casualty's 2019 statutory underwriting results showed evidence of business conditions that may no longer exist in the current, highly volatile macroeconomic environment.

Favorable loss experience in certain key business lines and strong rates of premium growth contributed to improvement in the combined ratio* for the aggregation of the vast majority of individual P&C filers to 98.8% from 99.1% in 2018. S&P Global Market Intelligence had projected a full-year 2019 combined ratio of 98.4%.

Direct premiums written increased 5.3% in 2019, down from their 5.8% rise in 2018. The net premiums written growth rate of 3.6% marked a sharp decline from the 2018 result of 10.9%, which had been inflated due to one-time reinsurance program adjustments in the aftermath of 2017 U.S. federal income tax reform. Direct and net premiums earned rose by 5% and 4.8%, respectively, reflecting the combination of upward pricing pressure in some lines and the benefits of relative macroeconomic strength on exposure units.

The loss and loss-adjustment expense, or LAE, ratio improved by 0.3 percentage point to 71.1% in 2019, and the ratio of underwriting expenses to net premiums written fell by less than 0.1 percentage point to 27.2%. The policyholder dividend ratio increased incrementally, providing a partial offset to those improvements.

The COVID-19 pandemic casts significant doubt upon the industry's near-term growth outlook as government-imposed restrictions and dramatic changes in consumer behavior could materially alter the levels of demand for various forms of property and liability insurance. To the extent a broad-based downturn in economic activity slows claims volumes in certain lines, such as through a decline in the frequency of auto insurance losses, any resulting benefits might be overshadowed by the diminished top-line prospects and the effects of unprecedented stock and bond market volatility on investment income.

The U.S. P&C industry last experienced declines in written and earned premiums in 2009, when the domestic economy was in recession through the first half of the year. 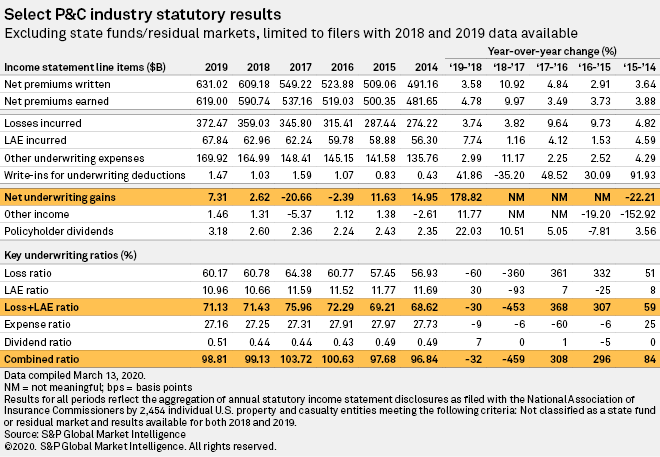 The P&C industry's direct incurred loss ratio across business lines fell to a four-year low of 59.8% in 2019. That outcome reflected sharply improved results for the homeowners and commercial multiperil business and higher, but still historically strong, loss ratios in workers' comp and private auto.

The homeowners and commercial multiperil direct incurred loss ratios improved to 58.1% and 56.1%, respectively, from 72.5% and 59.7% in 2018. Willis Re, for example, described 2019 as having been "fairly benign" from a natural catastrophe standpoint in the United States relative to the two previous years, with no single event resulting in as much as $5 billion in insured losses. A less active wildfire season and the near-miss from the Category 5 Hurricane Dorian along the U.S. mainland contributed to that outcome.

The lesser degree of improvement in commercial multiperil, in part, reflects experience in the liability component of that line where the direct incurred loss ratio increased by 3.1 percentage points.

In workers' comp, meanwhile, the calendar-year direct incurred loss ratio of 45.2% marked an increase of 1.4 percentage points from 2018. But it remained well below the average calendar-year result of 61.7% over a 10-year period ended in 2017. The results continue a remarkable run of profitability for a business that has benefited from virtual full employment in the United States.

Favorable development of loss and defense-and-cost-containment expense, or DCCE, reserves, was commonplace in this line. The aggregate amount of favorable development for all prior accident years totaled $6.32 billion, just below the calendar-year 2018 total of $6.35 billion. Development across all other P&C lines was unfavorable by $1.36 billion in calendar year 2019. A total of 13 individual entities, not counting state funds, posted favorable workers' comp reserve development of $100 million or more. Only two entities reported as much as $10 million in unfavorable workers' comp development.

The good times are unlikely to last in workers' comp, however. For starters, any material reduction in employer payrolls resulting from the COVID-19 pandemic would place additional downward pressure on premium volumes that are already in decline due to falling rates.

The pandemic might have an opposite effect in the auto insurance business.

To the extent employer- and government-imposed restrictions stemming from the COVID-19 outbreak cause a reduction in the aggregate number of miles driven, we would expect the frequency of auto claims to decline. That is already something that GEICO Corp. has already seen, Berkshire Hathaway Inc. Chairman Warren Buffett said in a Yahoo Finance interview.

The private auto business benefited in 2019 from lower frequency, helping to mitigate the effects of higher severity as vehicles become increasingly expensive to repair. Reduced business activity could change the dynamic in the commercial auto line, which in contrast to private auto suffered further deterioration in its loss ratio from already highly stressed levels.

The increased availability of real-time data from the use of telematics technology will aid carriers in determining the extent of the impact, particularly relative to the last extended downturn in miles driven during the 2008 financial crisis.

Commercial auto liability results made history for the opposite reason. The direct incurred loss ratio of 73.4% represented an increase of 1.7 percentage points from 2018 and marked the highest such result since 2001. Adverse prior-year loss and DCCE development surged to $2.55 billion from $1.78 billion.

At the other end of the spectrum, State Farm Mutual Automobile Insurance Co. showed the largest year-over-year erosion in underwriting profitability as its loss of $762.5 million marked a decline of $2.04 billion from 2018's result. Other members of the State Farm group more than offset that loss, however. CNA Financial Corp.'s Continental Casualty Co. had the industry's largest net underwriting loss among individual entities at $781.3 million. Both companies generated net income in excess of $1 billion, however, reflecting the effects of investment income.

*Industry-level results discussed in this article unless otherwise noted reflect the aggregation of data for 2,455 individual P&C entities for which both 2018 and 2019 data are available. They exclude entities classified by S&P Global Market Intelligence as state funds or residual markets. Direct incurred losses reflect the consolidation of results reported by individual P&C companies on the state pages of their annual statements. Future S&P Global Market Intelligence aggregations will generate different results based on the receipt of additional information, but we anticipate they will remain directionally consistent as the omitted filers (excluding state funds) accounted for only 0.7% of the industry's 2018 direct premium volume.

Sign up to receive upcoming issues delivered directly to your inbox