In today's media landscape, there are companies that believe the key to success is scale, while others opt for a leaner approach. Fox Corp. falls into the latter category, with a handful of valuable video assets and a focused offering of news and sports content — a vastly different approach compared to Comcast Corp. and its large-scale operation across media verticals.

Fox's revenue grew 5% year over year in the fiscal first quarter ended Sept. 30, thanks to increased advertising revenue bolstered by political ad sales at Fox's broadcast stations. During a time when many media companies are growing in size, Fox has kept its operations lean, with a small offering of news and sports networks. The company continues to invest in marquee sports rights, which have grown in price as new entrants such as Apple Inc. and Amazon.com Inc. aggressively bid on the right to broadcast these events.

Fox streamlined operations by selling a slew of assets to Walt Disney Co. in a deal that was completed March 20, 2019. Fox divested its general entertainment networks, regional sports networks and film studio operations at a time when other media companies were growing in size. Since then, the company has enjoyed consistent revenues by focusing on broadcast TV, news and sports. Fox may be adding assets, though, as reports of a merger with News Corp. have been swirling in recent weeks. Both Fox and News Corp. have confirmed they are exploring a potential combination. The Murdoch family owns both companies. 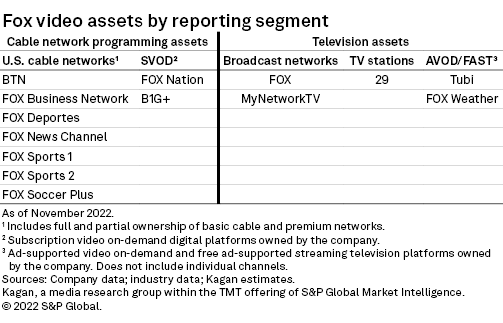 Fox has been less aggressive than its peers in investing in streaming, but it does offer the FOX Nation and B1G+ subscription video-on-demand services as well as the free ad-supported TV, or FAST, TUBI streaming platform and FOX Weather. 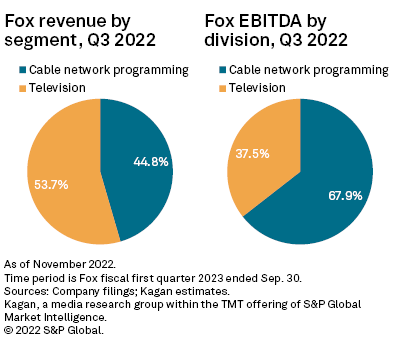 Fox is a sports-oriented company, with a variety of marquee broadcasting rights agreements with leagues such as the MLB and NFL. The rising cost of sports rights is concerning for a business like Fox that is so heavily reliant on the genre, though sports broadcasting is still very lucrative for the company. Fox currently does not have deals with the NBA or the NHL.

There are a handful of deals up for renewal in the coming years, with the MLS deal set to expire at the end of this season on Nov. 5. Apple TV has secured digital rights to the MLS starting in 2023 in a deal that spans 10 years. It will be interesting to see if Fox invests in the linear TV rights for the league going forward.

Fox is also a broadcast partner of World Wrestling Entertainment Inc., shelling out an estimated $202 million per year to broadcast weekly episodes of "SmackDown." The deal runs through 2023. NASCAR will also be looking for a new deal following the 2024 season.

Aside from the major deals in the table above, the company has a variety of agreements with college conferences to broadcast football and other sports, including having 61% ownership of the Big Ten Conference's BTN. Fox Sports and ESPN recently combined on a rights deal for the Big 12 at an estimated $2.3 billion through the 2030-31 school year at an annual average of $380 million.

Most of Fox's revenue comes from affiliate fees, which increased 2.6% in the quarter to $1.71 billion and made up 53.6% of total reported revenue.

Fox Executive Chairman and CEO Lachlan Murdoch — responding to an analyst question on pay TV sub churn's impact — said during the Nov. 1 earnings call that the decline has accelerated to 7% from 5% in the same quarter last year, although they have been able to continue to grow affiliate and retrans revenue with rate increases in renewals and reverse retrans from affiliate station owners.

Murdoch added that Fox is at the beginning of a three-year renewal cycle for retrans for its owned-and-operated, or O&O, stations and cable network affiliate fees. He said about 34% of Fox's aggregate cable and television segment distribution revenue is up for renegotiation in fiscal 2023, another 34% in fiscal 2024 and 28% in fiscal 2025. Fox recently extended its distribution agreement with Altice USA Inc. and its 2.7 million video subs prior to the Oct. 14 deadline, which included both retrans for its O&O stations and affiliate fees for its cable networks. 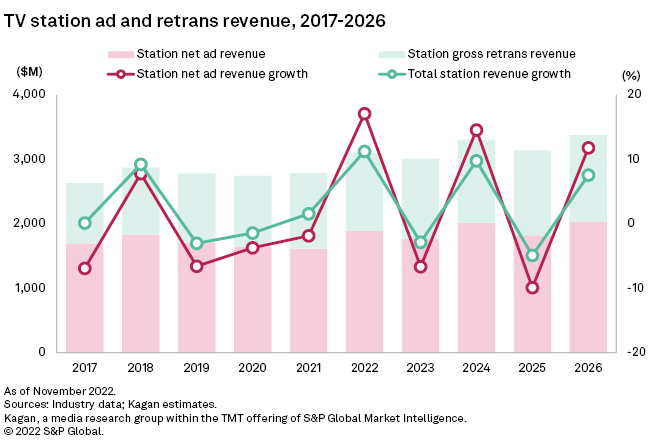 Fox's cable network programming operating segment derives over 70% of its revenue from affiliate fees paid by operators for carriage of its networks. FOX News Channel is the prized jewel of the group, with an average license fee per subscriber per month of $2.18. The network can charge a premium price as it is consistently the top-rated basic cable network on TV. 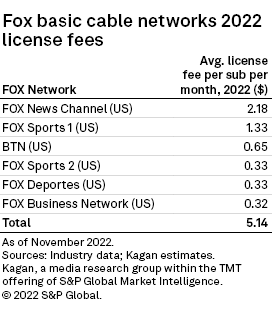 Cable network affiliate revenue increased by 0.3% in the quarter as contractual rate increases were offset by a decline in subscribers. The company completed major carriage deals in 2022 with Verizon Communications Inc. and Altice USA. The deal with Altice USA was not an easy one as the companies butted heads over rates up until the deadline before finally coming to an agreement. Looking at the company's current carriage agreements, we anticipate that the next renewals to look out for will be with AT&T Inc.'s U-verse and DIRECTV. 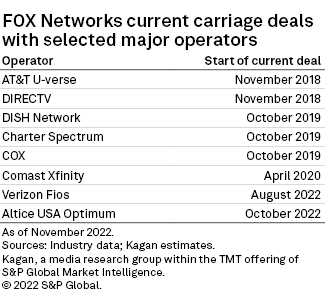 FOX Nation subscriber revenues are included in the "other" category, which improved 8.9% to $86 million during the fiscal first quarter. The company has not released subscriber data for the service, which costs $5.99 per month.

Advertising revenue increased 8.0% in the quarter, driven by 10.5% growth in the company's television segment.

Fox has increasingly highlighted Tubi results in its earnings announcements, as the FAST platform represents a growing slice of total ad revenues. Tubi generated $165 million in revenues in the quarter, rising 29% year over year and representing about 13.5% of Fox's total ad revenues for the quarter. Tubi's streaming catalog, which has swelled to about 48,000 titles, has helped drive viewing and advertising revenue growth, although the platform remains a drag on EBITDA in some quarters. Fox executives noted that the reported fiscal first-quarter EBITDA was impacted by an approximately $50 million EBITDA investment in Tubi. 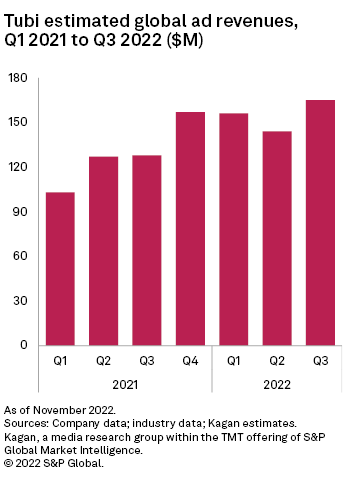