Centene Corp. and UnitedHealth Group Inc. topped the table of this analysis, which is based on self-reported pay ratios for 2019. Centene's Michael Neidorff, the company's chairman, president and CEO, received total adjusted compensation of $26.4 million in 2019. That came to 383x the median Centene employee salary of $68,987. 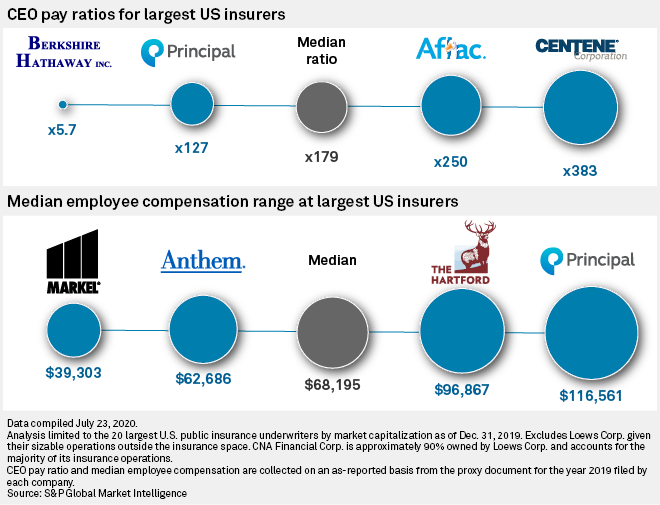 Rosanna Weaver, who researches CEO pay for the shareholder advocacy group As You Sow, said executive compensation, and pay inflation with it, tends to be within what is determined as their "peer groups." Boards hire executive pay consultants to determine peer groups and directors are more likely to justify pay increases if they find that others make more than their top executive, Weaver said in an interview.

CEOs in the past have sometimes recommended compliant directors in a practice similar to what Berkshire Hathaway Inc.'s chairman, president and CEO Warren Buffett assailed in an annual letter. His relatively modest compensation kept Berkshire's CEO pay ratio well below those of the other insurers in the analysis.

The indirect influences that once sent executive compensation soaring in the past have since mitigated, including peer group "abuse," Weaver said.

"For a while, you saw CEO pay really shooting up," she said. "It is closer to plateauing now, but now we've baked in this high level of income inequality."

Since executives' total compensation have always been public record, the big reveal since the implementation of the SEC's disclosure rule is what rank-and-file employees are paid, Weaver said, highlighting UnitedHealth's figure in particular.

Centene's CEO pay ratio came down last year compared to 2018 as the median worker salary increased, while the figures for UnitedHealth trended in opposite directions, the analysis shows.

Allstate Corp. had the highest non-health insurance CEO pay ratio for 2019. Chairman, President and CEO Thomas Wilson's $16.3 million compensation was about 317x that of the company's median employee salary of $61,860. At $19.1 million, the compensation for Cigna Corp. President and CEO David Cordani was 307x higher than the worker median of $62,946.

The lowest comparable pay ratio was Berkshire's. Buffett, who is one of the wealthiest people in the world, reported $400,000 in adjusted 2019 compensation, which includes a decades-long annual salary of $100,000. His pay ratio was just 6x his company's median salary of $65,740.

Cincinnati Financial Corp.'s pay ratio was the second-lowest in this analysis, but trailed Berkshire by a wide margin. President and CEO Steven Johnston's $5.5 million salary was 58x his company's median salary of $96,112. 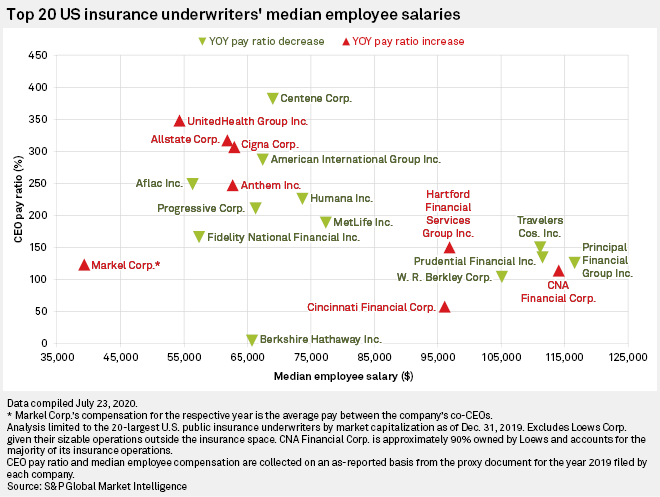