Investors Gave A Toast To Payments Companies In Q1

Fintech
Investors Gave A Toast To Payments Companies In Q1

A $250 million series E raise from point-of-sale payments platform provider Toast Inc. in March helped the payments sector close out the first quarter of 2019 as the most well-funded, in terms of dollar amount, among the different U.S. financial technology sectors that S&P Global Market Intelligence tracks. 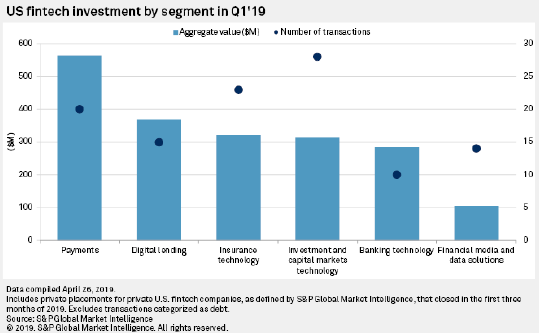 Stripe's $100 million round in January was another major contributor to the payment sector's total. Together, Toast and Stripe accounted for more than half of the total amount raised by U.S. payments companies in the first quarter. The two even shared a common investor in Tiger Global Management LLC, which was reportedly the sole investor in Stripe's raise and co-led Toast's private placement. Stripe provides payment processing software, with a particular focus on ecommerce clients, and has quickly become the highest-valued U.S. financial technology startup. Stripe's Tiger Global investment implied a post-money valuation of roughly $23 billion, whereas Toast's latest raise valued the company at $2.7 billion.

Across all the U.S. financial technology sectors, aggregate funding was about $690 million for March, up about 19% versus February and 1.5% versus January.

Generally speaking, the payments companies that received funding in the first quarter tended to be more seasoned than in other sectors. The average round number was four, versus three for all the other sectors except insurance technology, which was two. Round numbers are the amount of times a company has raised capital. Additionally, the average year founded was 2012 for payments companies, matched only by financial media and data solutions companies. The average year was higher for all the other sectors, indicating younger companies. While an extreme number could distort the averages, a look at median values revealed the same trends.

Other fintech sectors were far less top-heavy than payments in the first quarter. In the insurtech space, for instance, the largest raise was only $58 million in size and it only made up about 18% of the overall fundraising during the period. The $58 million series D round, which closed in February, came from CoverHound Inc., which offers a platform to compare and buy insurance online. In the announcement, CoverHound said it will use the proceeds to help develop its cyberinsurance subsidiary and support growth of its partnerships, as well as expand its offices and products to other geographies.

In addition to its partnerships with insurance underwriters, whereby CoverHound lists their policies on its site,

CoverHound has attracted insurance underwriters as investors. Global specialist insurer Hiscox Ltd. led its series D round, with additional investors including Chubb Ltd., Aflac Inc. and MS&AD Insurance Group Holdings Inc. CoverHound is not unique in attracting investments from incumbent insurers. P&C insurance was one of the most active industries in terms of incumbent investors in the first quarter; for instance, Noblr Inc. raised money from White Mountains Insurance Group Ltd. in January and the investors in Socotra Inc.'s February raise included MS&AD, Nationwide Mutual Insurance Co. and United Services Automobile Association. The most active incumbent industry was asset managers and custody banks, which is not surprising given that the vast majority of investors are funds and are therefore classified as asset managers.

Looking at March alone, Toast's series E raise topped the list of private placements by transaction value, but Chime's $200 million series D round was a close contender. The San Francisco-based challenger bank, which is officially known as 1debit Inc. but uses Chime as its marketing name, saw its post-money valuation triple to $1.5 billion with the series D round, less than a year after its series C. Due largely to the Toast and Chime offerings, payments and banking technology were the leading sectors for March. 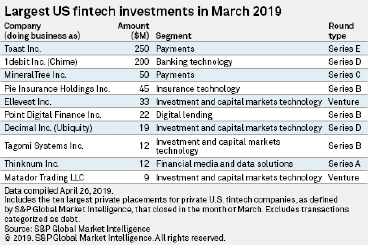