Dec. 12 2018 — In terms of investor appetite, insurance technology has been one of the more popular corners of the U.S. financial technology world in 2018. Through the first nine months of the year, insurance technology companies secured more than a billion dollars in funding, based on S&P Global Market Intelligence data, edging out other fintech segments such as payments and digital lending. 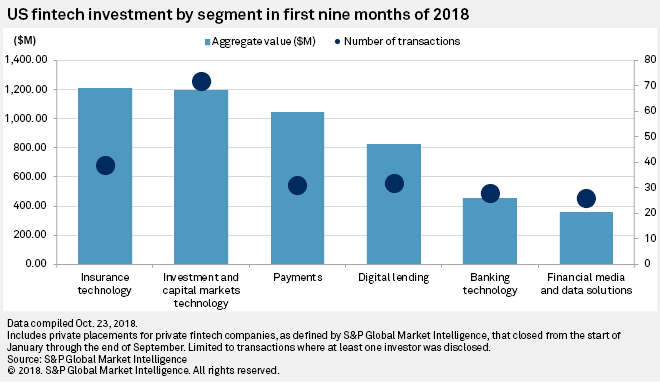 Classifying technology companies is not always an easy task, but we generally see two types of business models as driving the majority of the insurtech fundraising: digital agencies and full-stack companies. Digital agencies are brokers that sell policies online but do not underwrite them, whereas full-stack companies do both. Given the investor interest in these companies, they form the focus of S&P Global Market Intelligence's recently published 2018 US Insurtech Market Report.

Digital agencies were the targets of the largest number of transactions in the first three quarters of 2018, accounting for more than half of the total U.S. insurtech funding rounds. 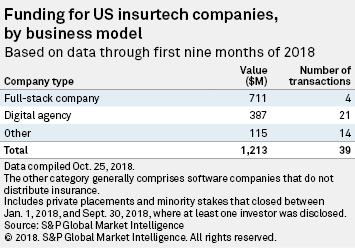 The digital agency label is admittedly a broad one. It includes companies like Insurance Panda, which uses the comparison site model, as well as Hippo Analytics Inc., which exemplifies the managing general agent approach. Comparison sites usually involve working with many different underwriters to aggregate quotes and policy features, helping the customer shop for the right policy. Managing general agents, by contrast, tend to work with a few underwriters, specialize in a specific insurance line and actively work with their underwriters to craft the policy features.

The majority of the digital agencies that wooed investors so far in 2018 were focused on property and casualty insurance lines, such as homeowners insurance and cyber insurance, but there were a few from the life and health insurance arenas as well. 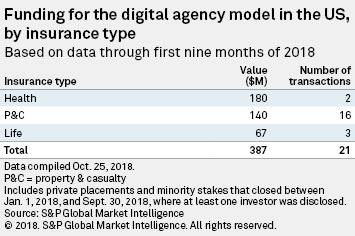 The health-focused companies were CollectiveHealth Inc. and Bind Benefits Inc., both of which are third-party administrators focused on providing tech solutions to clients that self-insure. Self-insured companies provide health coverage for their employees with their own money rather than using an outside insurance company. Since neither CollectiveHealth nor Bind writes its own policies, we consider this business model akin to a digital agency.

While only a handful of full-stack companies raised money in the first nine months of 2018, they accounted for more than half of the overall insurtech funding total by dollar amount. Health insurer Oscar Insurance Corp., homeowners insurer Lemonade Inc. and private auto insurer Root Insurance Co. all raised relatively large amounts, which makes sense given the full-stack business model. Since they handle their own underwriting, the full-stack companies must have a capital base big enough to pay out policyholder claims.

When calculating funding totals, we took a rather conservative approach, only including transactions where at least one investor was disclosed and where the offering had completed. For instance, our analysis did not include Root's $100 million capital raise in August, as the deal had not yet closed. But that transaction supports the trend we have already highlighted — full-stack companies are receiving the most funding by dollar amount.

Full-stack companies will likely continue to raise large amounts of capital, given their ambitious expansion plans. For instance, Metromile Inc. is offering insurance in eight states but said in July that it wants to expand nationwide. Root is in 21 states but clearly wants to tackle more, listing seven states as "coming soon" on its website.

Some full-stack companies have been struggling with underwriting profitability and could therefore need additional capital down the road. While the lack of underwriting profitability could eventually be a red flag for backers, it does not appear to be an issue at the moment. Tech investors tend to value top-line growth, and the full-stack insurtech companies have certainly been growing quickly.

For example, Lemonade's underwriting unit, Lemonade Insurance Co., went from writing less than $150,000 in direct premium in the fourth quarter of 2016 to about $9.9 million in the second quarter of 2018. That put Lemonade within the top 200 U.S. homeowners insurers in the second quarter of 2018, though it was still far short of the market leader, State Farm Mutual Automobile Insurance Co., which recorded about $5 billion in premium during the period. Allstate Corp. was next in line, with $2.2 billion, followed by Liberty Mutual Holding Co. Inc. with $1.8 billion.

Insurtech investors might also be willing to tolerate a lack of profitability if they think a company has the potential to disrupt a market. The digital agencies and full-stack companies probably have the most potential of the different types of insurtech companies, since they are competing head-on with incumbent brokers and underwriters. But as discussed in the 2018 US Insurtech Market Report, some insurance lines are probably more ripe for disruption than others, based on how entrenched the direct distribution model is within that line. In private auto, for instance, three industry heavyweights — GEICO Corp., United Services Automobile Association and Progressive Corp. — already write billions of premium via the direct response channel.