Deal-Making Roars Back to Life


Deal-Making Roars Back to Life

M&A activity picked up in the third quarter, and drivers are in place to keep the momentum going.

The total value of announced global M&A transactions jumped 159.7% quarter over quarter and 29.1% year over year to $780.98 billion, according to S&P Global Market Intelligence's latest M&A and equity offering report. Large deals helped drive the increase as 12 transactions with a $10 billion-plus deal value surfaced in the third quarter, and the big deal activity has continued since then with six M&A transactions carrying valuations in excess of $10 billion through the first week of November. 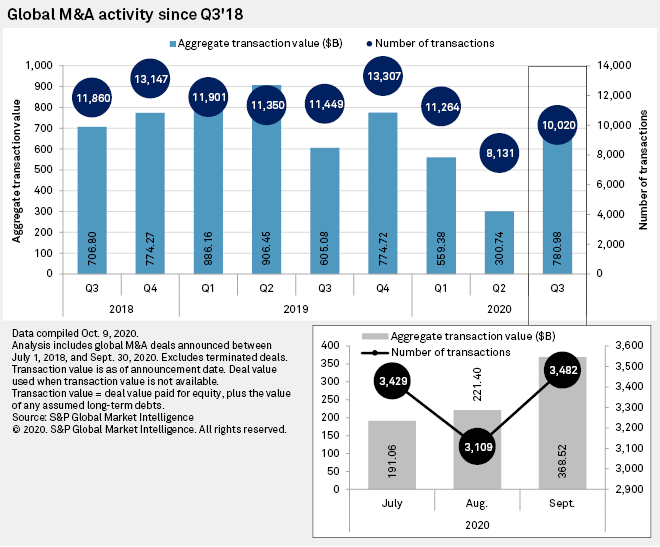 However, investment bank executives are now optimistic about the near-term outlook for M&A and believe the environment is conducive for increased activity. Evercore Inc. Co-Chairman and Co-CEO John Weinberg noted that the equity markets are strong for many sectors, financing is readily available, CEO confidence is improving and the markets are seeing greater stability.

"Absent a negative event, which could certainly happen, we are in the early stages of a recovery as many of the key conditions necessary for a healthy M&A market continue to improve," Weinberg said during an October conference call.

Advisory-focused investment banks are seeing a pickup in restructuring in the sectors most negatively affected by the pandemic. Those situations can lead to M&A transactions.

Pressure on commodity prices has led to consolidation in the oil and gas industry. Opportunistic buyers, such as private equity firms that have been preparing for a downturn, are on the lookout for distressed situations.

Investors have also been raising money for M&A deals by creating special purpose acquisition companies, or blank-check companies. SPACs raise funds through an initial public offering and use the proceeds to acquire companies.

U.S. SPAC activity skyrocketed in the third quarter as 76 blank-check companies raised $31.48 billion, up significantly from 23 deals that raised $8.04 billion in the previous quarter. The activity boosted equity issuance totals as the SPACs accounted for 56.3% of the total U.S. IPO proceeds raised in the third quarter. 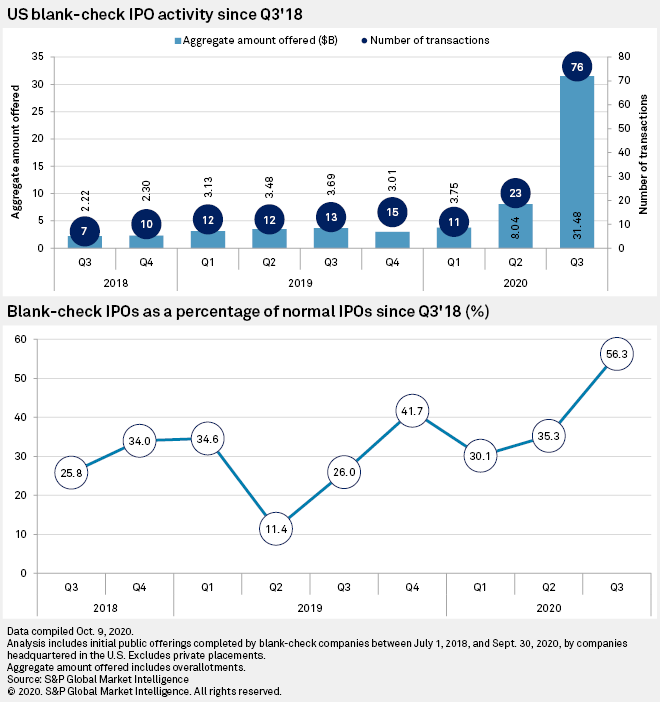 The increased interest in SPACs is attracting new players to the market. Piper Sandler Cos. Chairman & CEO Chad Abraham said his company has not historically advised on many SPAC transactions, but the investment bank is much more active now.

"The market [has] become much more mainstream," he said during an October conference call. "You look at the investors in the SPACs, that has certainly evolved, and the list is much longer."

Investors showed their support for larger SPAC deals, with three SPAC IPO transactions topping $1 billion in the third quarter. In 2019, the largest blank-check company IPO was a $690 million deal.

The larger IPOs should lead to larger blank-check company acquisitions when the SPACs settle on their targets. As SPACs continue to pursue larger deals, they should provide support for more $1 billion-plus transactions, setting the stage for more strong M&A activity in the coming year.

Deal-Making Roars Back to Life