With many of the world's banks having reported results for the period ended Dec. 31, 2018, S&P Global Market Intelligence took a bird's-eye view of bank efficiency around the world by looking at average cost-to-income ratios in countries with 2018 GDP more than US $100billion.

Banks around the world showed mixed progress in their 2018 cost-to-income ratios, with the majority of countries in the Americas showing improvement, while most of those in the Middle East and Africa deteriorated, data collected by S&P Global Market Intelligence shows.

The cost-to-income ratio, which measures operating expense as a percentage of operating income, is used to gauge efficiency and productivity for banks. Lower ratios generally indicate higher efficiency, but a number of factors can affect the ratio, including a bank's business model and size.

For example, as the Reserve Bank of Australia noted in its September 2014 Financial Stability Review, banks that focus on commercial banking and generate a greater share of their income from interest income "tended to have lower [cost-to-income] ratios than 'universal' banks, which earned a larger share of their income through non-interest sources such as investment banking or wealth management."

In Asia-Pacific and Europe, results were more evenly split.

When looking at banks across countries and regions, it is important to note that the economic, financial and regulatory environment of each country can affect cost-to-income ratios. Banks around the world also report financial results for a given period on different timelines, sometimes with fiscal year-ends that do not correspond to the calendar year-end. Market Intelligence used data available for each bank for the most recent period ending in 2018. Therefore, while the results included in this analysis do not perfectly line up in terms of time periods reported, they offer insight into the performance of banks in the 2018 calendar year. 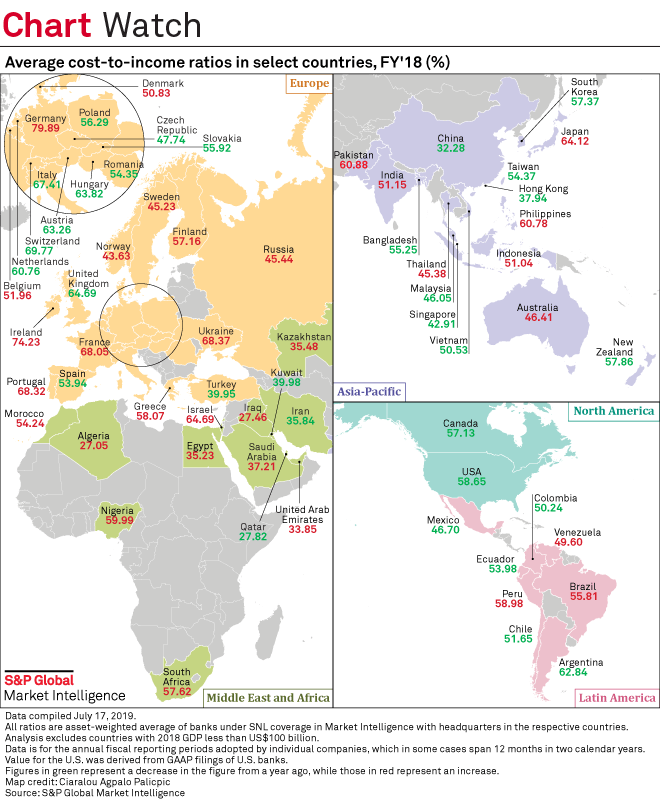