A year after the start of the COVID-19 pandemic, the mobile industry in the Asia-Pacific region has remained resilient, with flat growth in mobile subscriptions and a slight dent in earnings. Prospects for recovery this year are bright, but risks from increased competition and monetizing 5G remain.

Many markets experienced a contraction in their total mobile subscription base in 2020 due to pandemic-related restrictions. Macao experienced the largest drop in the region of 41.96% since the local mobile industry was heavily reliant on tourists and foreign workers. The same was true for Singapore and Hong Kong, which saw declines of 7.15% and 2.82%, respectively.

For other markets whose economies are less reliant on international travel, the closure of physical retail stores caused a massive blow on the ability of operators to sign up new customers. The disparity between the 10.60% contraction of the Philippines — which arguably has the longest, still-ongoing restrictions in the world — and the 6.10% growth of Vietnam and 3.17% growth of Japan, both of which did not implement widespread lockdowns, lend some support to this argument.

Most operators have since invested in improving their digital channels to not only attract new customers but also keep existing ones from churning. As more operators in the region digitalize their customer touchpoints, we expect that total mobile subscriptions will revert to positive growth in 2021. 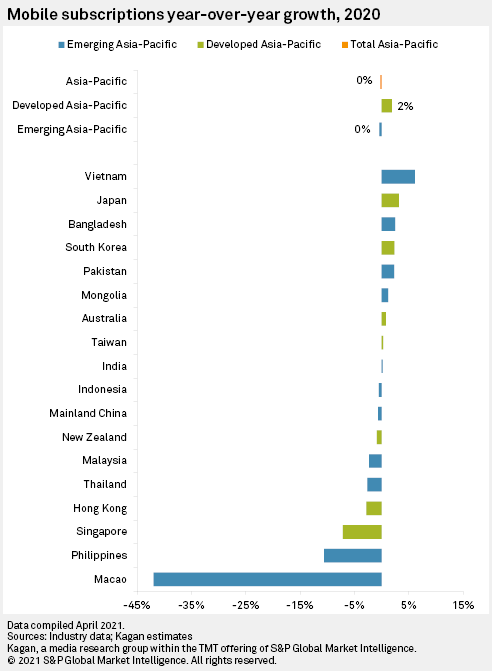 Click here to see a summary of initial promotions launched by mobile operators at the start of the pandemic. Click here for an analysis of mobile price and affordability across markets worldwide in 2020.

Asia-Pacific mobile operators were among the first to offer promotions and free services to their customers in response to the pandemic. While this kept customer churn at bay, it caused a decline in the price of mobile services and negatively impacted the earnings ability of operators.

Mobile service revenue in Asia-Pacific declined by 7.23% to $275.93 billion in 2020. Combined with flat growth in mobile subscriptions, this resulted in 8.44% drop in mobile average revenue per user to $5.48 in the region. 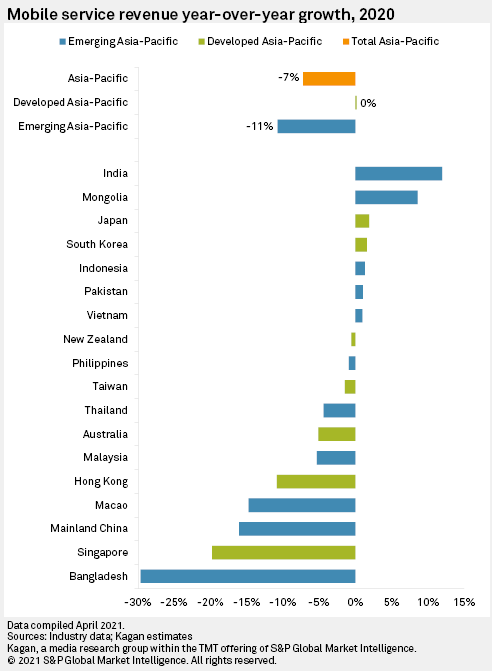 On average, mobile prices in the region dropped more than real personal disposable income per capita, resulting in an insignificant improvement of 0.07 percentage point in the affordability of mobile services to 1.86% in 2020. There appears, however, a clear divide between developed and emerging markets when we do a cluster analysis of the price and affordability of mobile services. 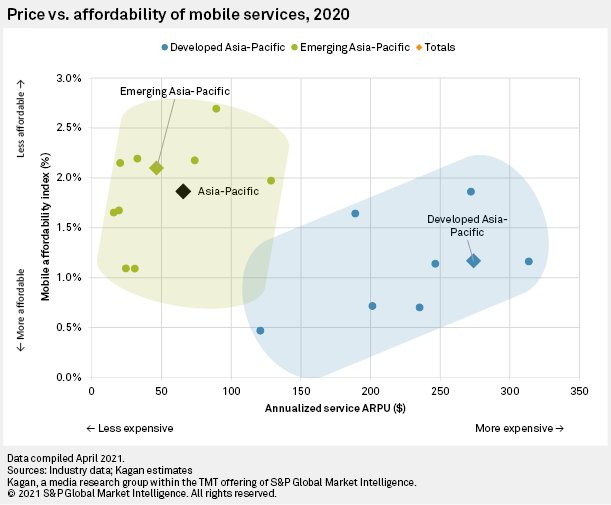 The fragile balance sheets and reduced income streams of some operators were a factor in the cancellation or postponements of several spectrum auctions in Asia-Pacific. For instance, the local regulator in India announced in May 2020 that it would delay the much-anticipated 4G and 5G spectrum auctions to the following year due to the financial concerns of operators. As a result, India's spectrum congestion worsened by 0.20% in 2020.

Vietnam saw the highest increase in spectrum congestion of 6.10% in the region, but this an anomaly considering the increase in mobile subscriptions discussed earlier.

Overall, spectrum congestion in Asia-Pacific dropped by 34.11% in 2020 to about 192,832 subscriptions serviced by a megahertz of spectrum. 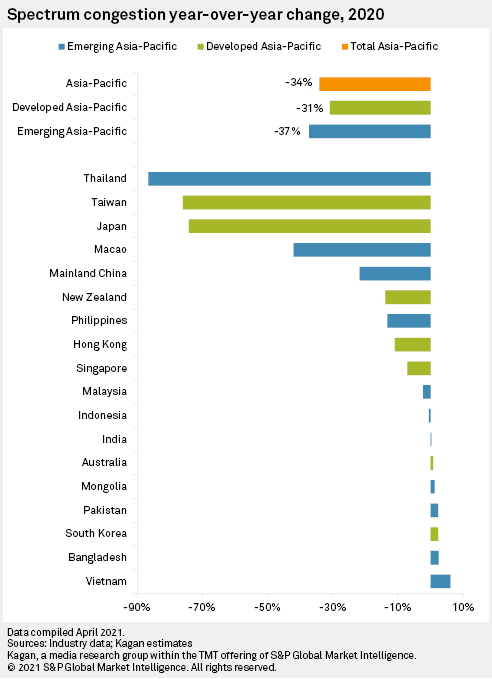 Refer to this report for an in-depth discussion of tower and small cells in Asia-Pacific.

Financial concerns also impacted tower rollout, and consequently tower congestion, in Asia-Pacific. Most mobile operators and tower companies opted to shift their capital expenditures from 2020 to the following year since lockdowns prevented them from building new towers at the height of the pandemic.

Restrictions in some markets eventually thawed in the latter half of 2020, allowing total towers in the 18 markets that we cover to grow by 4.02% by year-end. This resulted in a 4.08% improvement in tower congestion for the entire region, or an average of 790 subscriptions serviced by a single tower. 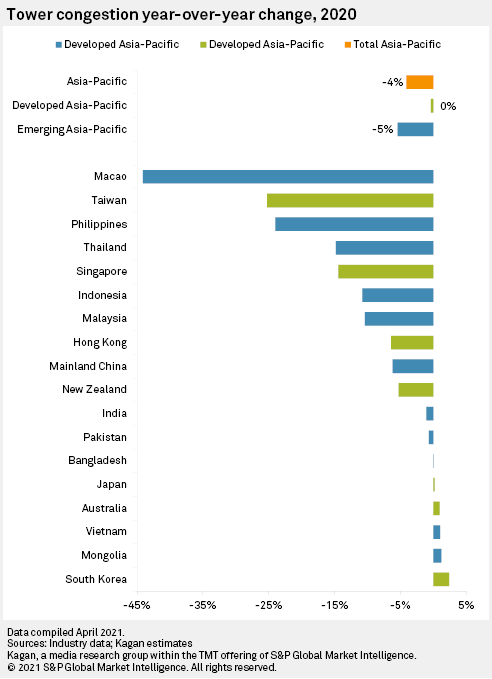 The pandemic disrupted the 5G timeline of many operators. Japanese operators, for instance, moved up their commercial launch to March 2020 after the postponement of the Tokyo 2020 Summer Olympics originally scheduled for July 2020.

These combined 5G subscriptions accounted for 6.28% of total mobile subscriptions in Asia-Pacific in 2020. This is still small compared to the 65.56% share of 4G in the region. 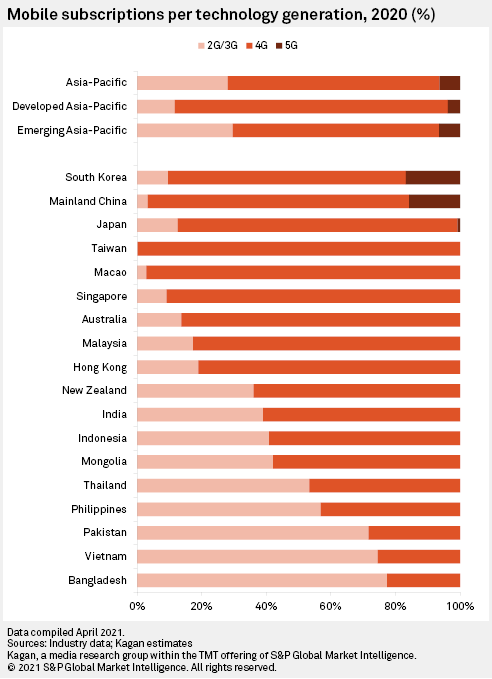 Risks and opportunities in 2021

As mentioned, operators will ramp up their capital expenditures in 2021. Operators will spend to acquire spectrum that they failed to get and towers they were not able to build last year. Spending will focus on maintaining and expanding network capacity as study- and work-from-home arrangements are still expected to remain throughout the year.

To support this heightened level of spending, operators would have to increase their revenues either by discontinuing promotions and discounts, selling more expensive packages with higher data allocations, or offering value-added services. However, other factors, such as the threat of new entrants in Japan (Rakuten Mobile Inc.), the Philippines (DITO CME Holdings Corp.'s Dito Telecommunity) and Singapore (TPG Telecom Ltd.), may limit the ability of operators to increase their prices.

5G likewise offers little respite for operators who wish to expand their revenue streams since consumer adoption of 5G remains lukewarm. Operators still market 5G as enhanced mobile broadband. Although enterprise 5G solutions have been deployed in some private networks, there is still no strong business case for the same use cases for the general consumer.

In our opinion, operators must first achieve wider coverage, cost-effective deployment solutions, cheaper handsets and better consumer demand for new use cases before they can reap their return on investment on 5G.

Click here to see a discussion of how new 5G use cases helped in the fight against the pandemic in mainland China.