Ant Group may have decided against a U.S listing, but investors estimating the Chinese company's valuation might turn their gaze to a U.S peer: PayPal Holdings. While such a comparison shines a light on Ant's modest transaction margins, it also illustrates its gigantic payment volumes and might boost the company's prospect of attracting a valuation of over $200 billion.

Ant could become the fourth payments company to join the rare group of publicly traded financial services companies with more than $100 billion in market value. The list currently comprises 15 companies, including PayPal, a payment service provider that bears close comparison to Ant Group. Visa and Mastercard — the other two U.S.-listed payment processors in the group — primarily manage the complex web of financial intermediaries and service providers operating in their card networks. But the card network operators do not directly hold contractual relationships with merchants and customers. 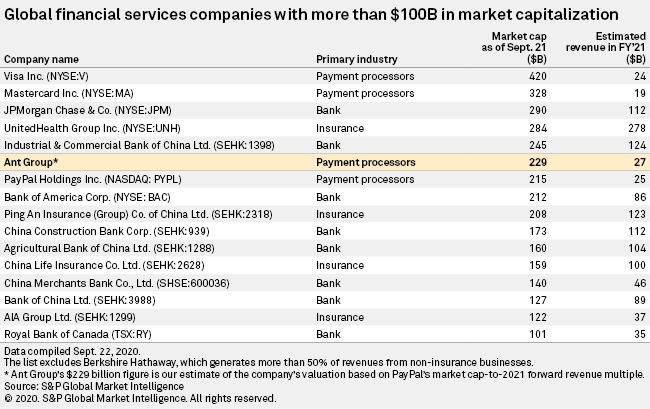 Both PayPal and Ant have built two-sided networks of customers and merchants. They primarily make money off the spread between fees charged to the merchants and payment processing fees paid to banks for drawing funds from a customer's bank account or credit card. Growth comes from adding more capacity to the network and driving greater consumer engagement. Aside from transaction expenses, both companies engage in marketing and promotional expenditure for acquiring users and merchants.

Ant reported financials for the past 2.5 years, which reveal an unstable earnings stream, partly driven by varying customer acquisition costs. We believe revenues and net revenues are more reliable metrics for evaluating the company in relation to PayPal. Net revenues exclude transaction expenses and other costs of services that primarily correlate with transaction payment volumes.

As of Sept. 21, PayPal's market capitalization was 8.44x its 2021 forward revenue. Applying that multiple to our 2021 revenue estimates of $27 billion for Ant, the Chinese financial technology firm should attract a valuation of $229 billion. Assuming a multiple that compares PayPal's market cap to its 2021 forward net revenues, which are revenues adjusted for cost of services, Ant could secure a higher valuation of $268 billion. Both estimates would put Ant ahead of PayPal in terms of market cap, but the latter estimate appears to be too rosy.

Overall, 37 publicly traded fintechs around the world had a market cap of more than $10 billion as of Sept. 21. At least 16 of them had higher market capitalization-to-forward revenue multiples and 9 companies had higher price-to-forward earnings multiples than PayPal.

Ant is on course to surpass PayPal in revenues and earnings this year. Still, valuing Ant at a higher multiple than PayPal could be a stretch.

Volatile cash flows, wary regulators, potential credit slowdown and a maturing payments market in China pose headwinds to Ant, which derived 95% of revenues from China in 2019. PayPal is more geographically diversified, with about 47% of revenues coming from outside of the U.S.

On Hong Kong and mainland China stock exchanges, investors might struggle to find a large fintech that merits a close comparison with Ant. Hithink RoyalFlush Information Network Co. Ltd., which is listed on the Shenzhen Stock Exchange, appears to be the only fintech with a market cap of greater than $10 billion, but it is primarily a financial information services provider.

A comparison with Ant's close competitor, Tencent Holdings Ltd., makes sense, although fintech revenues account for only 22% of the revenues of the digital conglomerate listed on Hong Kong's stock exchange. Tencent's fintech business does not add much to its bottom line, but payments remain pivotal to the company's ability to create a virtuous cycle of commercial activities through its WeChat app, helping propel its advertising and other businesses.

Tencent's market cap was 7.37x 2021 forward revenue as of Sept. 21, which represents a lower multiple than that of PayPal. A valuation of $200 billion, based on Tencent's multiple, could set expectations for a floor price band in Ant's IPO.

Tale of two fintechs and their take rates

At the outset, a comparison with PayPal may seem flawed, as Ant is much more than a payments company. Revenues from Ant's lending business surpassed its payments revenues in the first half of 2020. Yet Ant's revenues, including those coming from lending, largely correlate with the total digital payment volume processed through its platform.

Lending facilitated through Ant is often meant to fund the purchase of goods and services within its ecosystem. Ant has built a large marketplace for diversified financial services, without taking on commensurate balance sheet risks, by connecting banks, asset managers and insurers with consumers. It primarily serves as a gateway for both merchants and financial institutions to reach the platform’s millions of customers.

Ant's extremely low average fees on payment transactions translate into relatively meager revenues per transaction, but the company makes up for it by processing giant volumes. 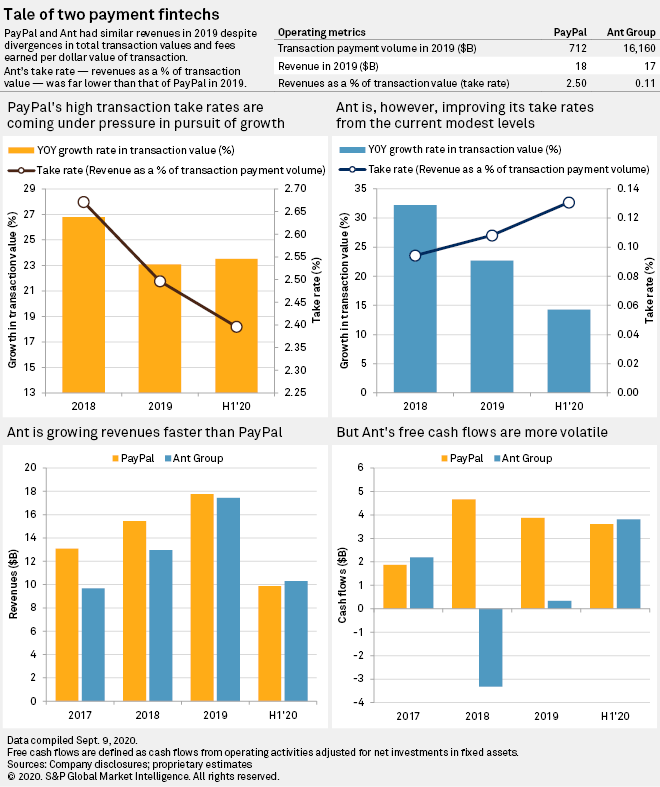 In 2019, Ant Group's Alipay processed 22x more total payment volume (TPV) than PayPal, but the Chinese fintech's revenues came in slightly lower than the U.S.-based company. Ant Group reported revenues of $17.46 billion on $16.158 trillion of TPV. With just $711.93 billion of value processed through its platform, PayPal's 2019 revenues were higher than Ant's at $17.77 billion.

Ant's transaction take rate — defined as revenues as a percentage of TPV — was just 11 basis points in 2019. PayPal, on the other hand, saw a take rate of 249 basis points. After adjusting for the marginal costs of facilitating a transaction, such as processing charges, the net take rate dropped to 5 basis points and 112 basis points for Ant and PayPal, respectively, in 2019. Both PayPal and Ant incur costs when customers draw funds into their payment system, which typically vary depending on the funding source.

Optimizing the net take rate is critical to maintaining a balance between growth and profitability.

A small minority of transactions drive the majority of revenues

Roughly 7% of transactions contributed more than half of Ant's revenues in 2019. This is because a vast majority of payment volumes, including transfers between Alipay accounts, earn little to no fees. Ant's monetization strategies largely hinge on cross-selling other financial services to its payments user base.<.p> 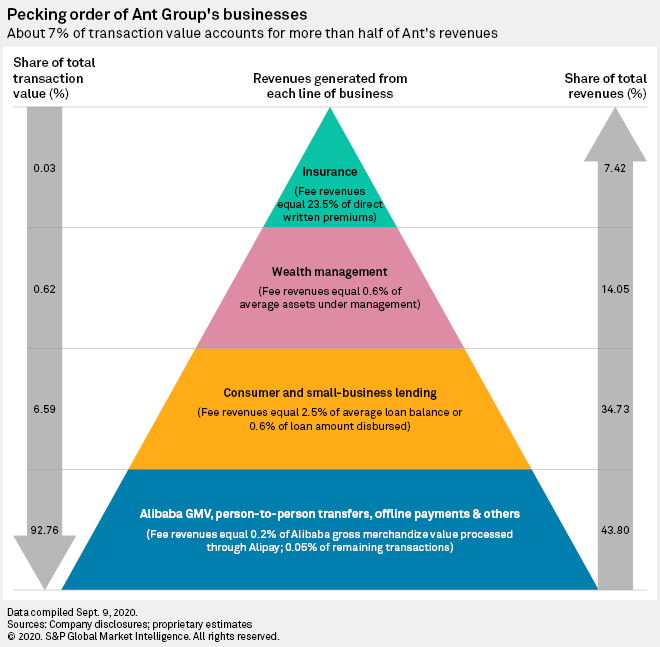 But a greater push into lending has lifted the company's revenue take rate in recent times. Ant collects a fee of roughly 2.5% of the average outstanding balance of credit enabled through its platform. Put it differently, the fee amounts to 60 basis points of purchases enabled using unsecured credit products, which is higher than the company's overall 11-basis-point weighted average take rate. The estimate assumes that the average outstanding balance represents one-fifth of the total purchases made using Ant-facilitated virtual credit, which is in line with the credit card payment trends seen at large banks in China.

When a consumer chooses Huabei, Ant's virtual credit card, as a payment method to make a purchase, nearly all of the fees the company earns trickle down to the bottom line. Ant does not incur any processing costs, as the transaction becomes "in-house." Therefore, Ant generates extra profit when a consumer uses Huabei instead of a bank card.

Purchases of insurance policies and mutual funds similarly draw higher fees for Ant. The insurance segment has the highest margins, with Ant keeping nearly one-fourth of premiums and contributions made by its customers.

With a rising take rate, Ant is on course to report higher revenues and earnings than PayPal this year. Still, extrapolating this recent outperformance into the future could be problematic. If Ant's past track record is any guide, its future earnings trajectory too could be uneven.

Ant could run up against growth constraints in its payments and lending businesses.

Growth rates have slowed in recent years in China's third-party payments market, which represents transactions processed by non-banks. The aggregate transaction value grew 20% in 2019, a far cry from the more than 100% annual growth rates seen in 2016 and prior years.

Regarding user growth, about 85% of Chinese with access to mobile internet were using mobile phones to make payments as of March 2020, according to China Internet Network Information Center. But in a maturing market with mobile payment adoption rates inching toward 100%, new mobile payment user growth could slow down. 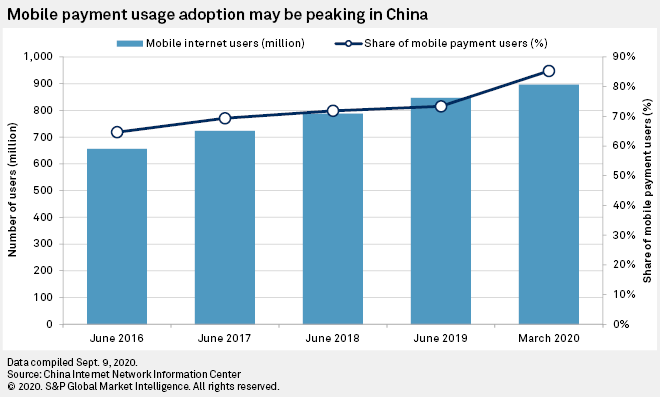 Further, Ant will have to deal with growing competition from Tencent's WeChat Pay. A 2020 Asia online survey conducted by Kagan, which is part of S&P Global Market Intelligence, shows that WeChat Pay is quickly catching up with Alipay. Nearly all payment users in China appear to use both Alipay and WeChat Pay. About 92% of our survey respondents reported using both platforms.

Competition between the two companies in a saturating market could further intensify and adversely impact take rates and customer acquisition costs. In 2018, Ant incurred about 55% of revenues toward marketing and promotional expenses. Although Ant's customer acquisition expenses have since seen a sharp decline, especially in the wake of the pandemic, it might have to ramp up marketing spend to acquire new users and keep existing ones.

In the lending business too, high growth rates seen in the past may be hard to come by. The Chinese fintech already facilitates far greater consumer credit than the biggest banks in China, based on the outstanding balance enabled through the platform as of June 30. About 98% of credit balance originated through Ant's platform was underwritten by its partner banks or securitized. 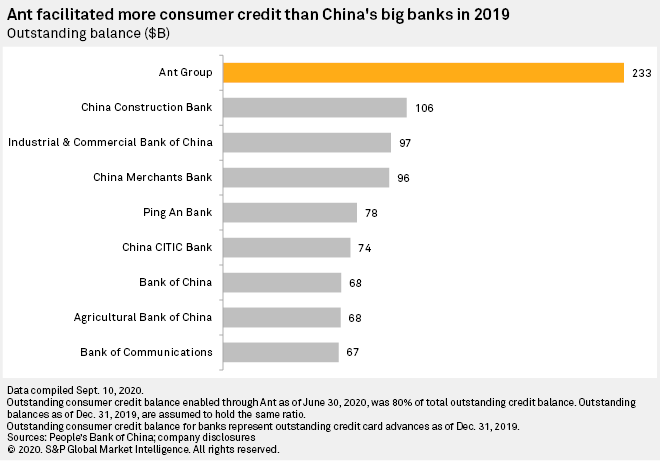 Overall, the economic slowdown in China has been a drag on consumer credit trends. After years of growth, the aggregate outstanding balance of credit cards in China shrunk to $1.062 trillion as of June 30 from $1.090 trillion at the end of 2019. Ant's credit business was not unscathed, with the outstanding loan balance facilitated through Ant slowing down in the first half of the year. Potential adverse credit trends could cause banks to cut back on their exposure to lending facilitated through the Ant platform.

Additionally, Ant's leading position in financial services could come under regulatory scrutiny. In the past, regulatory restrictions came in the form of caps on annual payment volumes for certain categories of digital payment accounts and a requirement to place customer reserve funds in interest-free bank accounts, among other things. Ant navigated those headwinds by expanding into adjacent financial services and discovering newer revenue levers.

But Chinese regulators are signaling that more regulation is in the offing. Pending proposals include imposing greater capital costs on nonbanks expanding into financial services and restricting fintechs' ability to issue consumer credit-backed securities. China's expected rollout of digital currency could weaken the market position of leaders Alipay and WeChat Pay.

See our solutions in action.