If you're an existing client

Indonesia Malaysia, the Philippines, Singapore and Thailand are the five largest economies in the Association of Southeast Asian Nations, or ASEAN-5. They are also a hotbed for nonbanks building regional electronic wallet platforms.

People across the region use stored-value or prepaid instruments to make small-value transactions with a card-based product or e-wallet. Known as electronic money, or e-money, these products can be issued by banks and registered nonbanks. E-money accounts do not pay interest and can be issued to people without bank accounts.

Over 10 billion in aggregate e-money transactions occurred in the five countries covered in our report in 2018. Singapore accounted for 34% of the region’s e-money transactions with a population of just 5.6 million, while Indonesia saw the second-largest number of e-money transactions and had the fastest year-over-year growth rate. In Singapore, Malaysia, Thailand and Indonesia, e-money instruments were used more than twice as frequently as debit and credit cards in 2018. 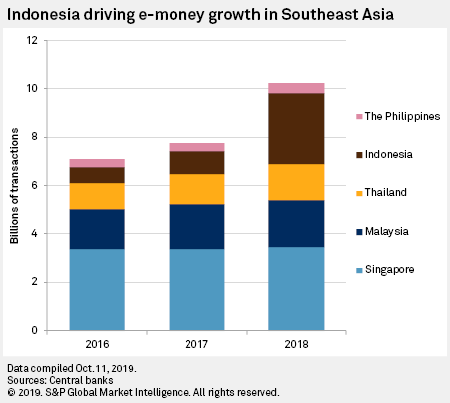 Within the e-money category, the volume of transactions processed through e-wallets is gaining steam. For example, S&P Global Market Intelligence estimates that e-wallets’ share of total e-money volumes in Indonesia grew to 36% in 2018 from less than 10% in 2017.

Nonbanks account for the majority of e-money license holders in Indonesia, Malaysia and Thailand, primarily offering e-wallets. Only in the Philippines do banks hold more e-money licenses than nonbanks. But banks are still a force to be reckoned with in the Southeast Asian e-money space. S&P Global Market Intelligence sees the greatest growth potential for nonbank-led e-wallets in Indonesia and the Philippines.

As dominance in payments often paves the way to other financial services, the ongoing competition could lead to the emergence of the first-ever regional nonbanking mobile platform to deliver payments, lending and insurance.