Companies raising debt in the European speculative-grade bond market have been locking in deals at record-low yields this year, driven by tumbling yields in government bonds and the restarting of the Corporate Sector Purchase Programme, or CSPP, by the European Central Bank.

Given the trickle-down effect from negative government bond yields — which has led money to chase yield by moving down the ratings ladder — it is higher-rated, double-B issuers in the European high-yield bond market that have seen the most dramatic decline in coupons. 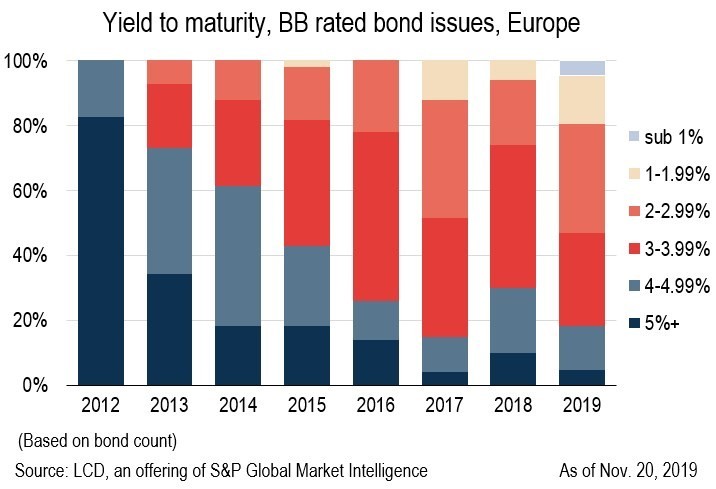 Indeed, some 5% of bonds issued in this market segment this year have priced with yields below 1%, including Crown Holdings Inc., Ball Corp., and OTE PLC. While this remains a select group, a further 15% of issuers in this cohort have priced offerings with yields between 1% and 1.99%, meaning a full 20% of double-B rated bonds issued in Europe so far in 2019 have come below 2%. The next-highest market share of sub-2% yields for this cohort was recorded in full-year 2017, at 12%, while in 2018 this share was just 6%, according to LCD.

In contrast, back in 2012 some 83% of double-B rated bonds priced with yields of more than 5%. This year, just 5% of bonds from this cohort have printed with yields above that mark. 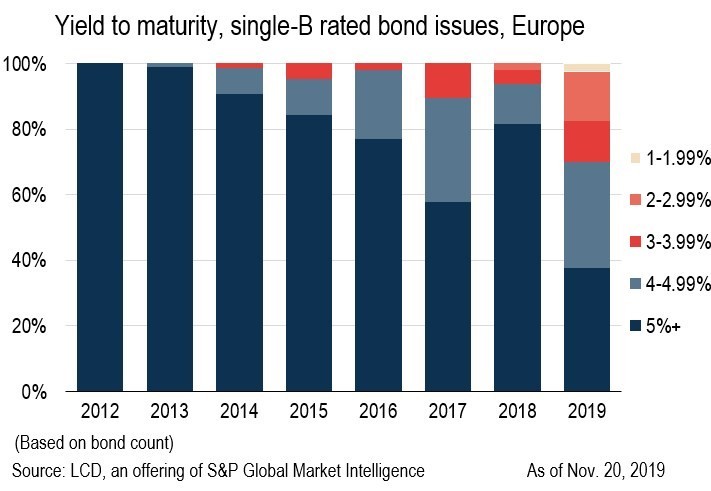 While double-Bs have been a key beneficiary of investment-grade accounts moving down the ratings ladder — with the double-B corporate space becoming a quasi-safe haven trade in which to park cash and avoid negative cost of carry — single-B yields have come down sharply, too.

However, while this decline in yields on lower-rated borrowers might also be due to money being pushed down the ratings ladder in search of yield, the European new-issue market has been heavily bifurcated for much of 2019, and it has therefore been those issuers within the full B ratings spectrum, but perceived as better-quality, that have come to market.

Regardless, it is eye-catching that 17.5% of single-B bond issues in Europe this year have printed with yields below 3%, versus just 2% last year, and none for every year prior, since LCD has recorded this data, while 30% of such bonds offer yields below 4%, versus 6% last year and 10.5% in 2017. 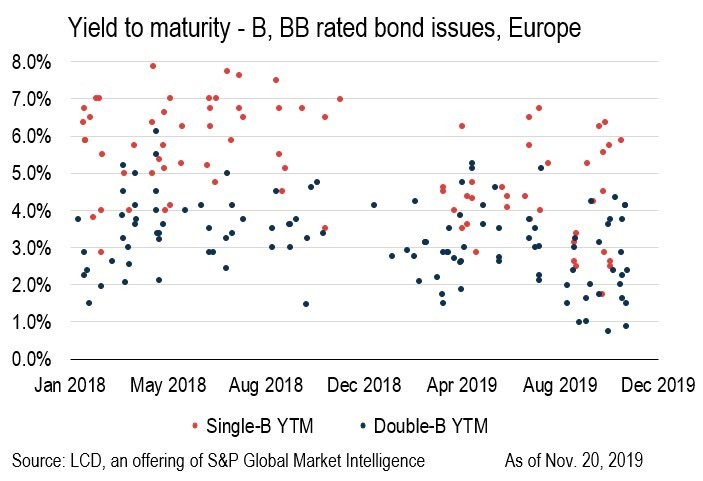 Yields have also been falling in both ratings cohorts since last year, with a far greater cluster of deals printing below the 3% line.

While this trend is likely to continue, given market technicals — the ECB has only started ramping up CSPP in November — bankers say they are starting to see a clear shift in investor appetite toward higher-yielding deals from large-cap credits with some credit concerns.

"Casino [Casino Guichard-Perrachon SA the France-based mass-market retail group] was a big tipping point for me," a banker said. "There was a big shift in sentiment, with accounts showing they were keen to own large-cap credits with some yield on them, and were willing to accept some hair on them to get those yields."

Earlier this month, Casino completed an €800 million offering, rated B+/B1, to yield 5.875%. The refinancing was upsized by €50 million due to investor demand.

"You see it with Teva [Teva Pharmaceutical Industries Ltd.] and I expect it will be the same for Jaguar Land Rover," the source added. "[Investors] do not want small, illiquid credits, and the hardest deal to do right now is a [€300 million–500 million deal for a hairy credit. It’s much easier to do €750 million, where the credit has a decent equity market cap and some credit concerns."

This story was written by Luke Millar, who oversees European leveraged finance coverage for LCD.