Lenders focusing in the highly prized middle market segment of the U.S. leveraged loan arena have recently increased their exposure to healthcare loans. 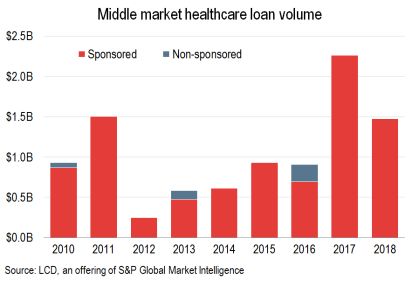 Looking to the large corporate loan market, sponsored healthcare lending had a record-breaking year in 2018. Total healthcare loan volume surpassed $40 billion, or 14% of total volume, according to LCD. These figures significantly exceed the volume and share totals from 2010 onward. 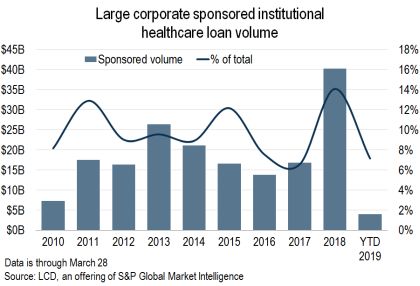 “There has certainly been an increase in healthcare lending activity over the last year,” Steve Warden, head of healthcare at Varagon Capital, confirms.

Clearly, there has been significant activity in healthcare on both the equity and debt sides.

In addition to BDC portfolios with high concentrations of healthcare, many traditional middle market lenders are holding large exposures, according to sources. “Currently, around 20% of our portfolio is in healthcare,” Walter Owens, CEO of Varagon Capital, says.

“For multiples, we see a big range for middle market healthcare companies, but the upper end is at 15–16x,” Kamran says.

“Healthcare valuation multiples have often been in the double digits,” Warden adds. “Some healthcare companies have traded in the 14–15 range, whereas 5–6 years ago they were in the 8–10x range. Multiples may stay at these high levels if private equity sponsors see the possibility to do accretive acquisitions down the road.”

In the middle market, healthcare multiples are high and loan activity is up. But why?

“The organic growth trends are pretty good, and healthcare is less cyclical than other industries,” Kamran says.

“As a direct lender constructing a portfolio at the peak of the cycle, it’s important to remain defensive, which is why we have considerable exposure to healthcare,” Owens explains. “We like the healthcare sector because it’s less correlated with the economic cycle.”

In addition to being less cyclical, cash flow of healthcare companies can be attractive.

With higher valuations, more total capital will be needed to complete a buyout, naturally.

“Healthcare companies are typically levered higher. If a sponsor is paying a premium for the company, the sponsor will try to get more leverage,” Kamran confirms.

Subsectors
To be sure, healthcare is a broad sector, and can include a range of business focuses, from urgent care centers to manufacturers of complex brain implants. So where is the action today?

“A huge chunk of activity is in physician practice management,” Kamran notes.

One recent example would be the $52 million credit Health Plus Management undertook via SMBC as arranger. Health Plus is a provider of business management and operation services for independent physician practices in the physical medicine and rehabilitation market.

Another recent example is the financing THL Credit and Morgan Stanley provided in January for Vesey Capital’s recap of Elite Body Sculpture, a physician services business that is a provider of minimally invasive body sculpting procedures.

“There are a lot of physician practice management deals in the middle market, and we expect the high concentration of deals in this subsector to persist,” says Warden.

“In addition to physician practice management, another subsector where we’ve seen an increase in deal activity is pharma, and pharma-related services," Brian Carroll, a managing director at Varagon, adds. "In fact, pharma and pharma-related services is the second most-prominent subsector of healthcare where we see deal flow. Pharma R&D has been on a 10-year upward trajectory, and we continue to see a lot of deals in the outsourced clinical trials services space."

One recent example: In February, MidCap provided a loan to Publicis Healthcare Solutions, a pharmaceutical contract commercial services organization, for its buyout by Altamont Capital.

"Given the headlines around drug pricing and structural changes in the market, we have seen less activity in the specialty and generic pharmaceutical sub-sectors. However, this has been more than offset by strong activity in pharmaceutical services and consumer health products,” Varhol says.

Concerns
Just because capital has been chasing healthcare deals doesn’t mean the sector is risk-free, of course. In the middle market in general, definitions of EBITDA have grown increasingly flexible, as the competitive lending environment has further tilted the market in issuers' favor.

“Our highest point of focus in legal docs is the EBITDA definition. We strive for appropriately drafted definitions that limit non-recurring or pro forma adjustments,” Carroll says.

However, there are risks that are specific to the sector.

“We are seeing an increasing number of deals that have a significant capitation reimbursement component. Typically, deals for these types of concerns [where participating physicians receive a fixed sum for each insured patient, regardless of how much care the patient received] will involve physician groups that have large market scale and strong relationships with payers. This subsector is more challenging to navigate, given the fixed revenues, with uncertainty around utilization or expenses,” Carroll says.

Clearly, each subsector can be unique, and this variation, even within the industry, necessitates deep healthcare expertise in an investment team. And the segment, like others, is not without risks.

For example, Texas Capital, a commercial bank that lends to middle market companies, announced in late January charge-offs. Sixty percent of the $78 million in charge-offs for 2018 came from four leveraged loans—two in healthcare and two in quick-service restaurants, according to S&P Global Market Intelligence.

“We have not been great at healthcare financing, and so we're not going to decide we will be great anytime soon," C. Keith Cargill, CEO of Texas Capital, said on fourth-quarter earnings call. "And so that exposure is down to almost nothing in the leveraged book."

Further, there are risks looming for the healthcare sector at large.

"Price controls" were mentioned as a risk factor in the annual reports of 234 industry companies in 2018, according to financial research platform Sentieo, per a March 13 Wall Street Journal story. That is nearly triple the number using the phrase in 2013. The price controls refer to the likely consequence of the “Medicare for All Act of 2019” introduced by congressional Democrats. According to Congress.gov, the bill has 106 co-sponsors of the 235 representatives in the Democratic caucus. — Shivan Bhavnani