I-Banks Raking It In On Fintech M&A


I-Banks Raking It In On Fintech M&A

Financial technology companies have been making it rain for M&A investment bankers in 2019.

So far this year there have been four $10 billion-plus U.S. M&A deals announced. The latest deal — a roughly $21.5 billion merger of equals between Global Payments Inc. and Total System Services Inc. — could lead to total advisory fees anywhere from $51 million to $64 million, according to an estimate from Freeman Consulting Services Director Lam Nguyen.

Some of the other recent large fintech deals could generate even bigger paydays for investment banks, financial advisory fee data indicates. Goldman Sachs & Co. LLC, for example, stood to receive approximately $71.7 million in a fee contingent on the closing of The Ultimate Software Group Inc.'s $10.97 billion sale to an investor group. 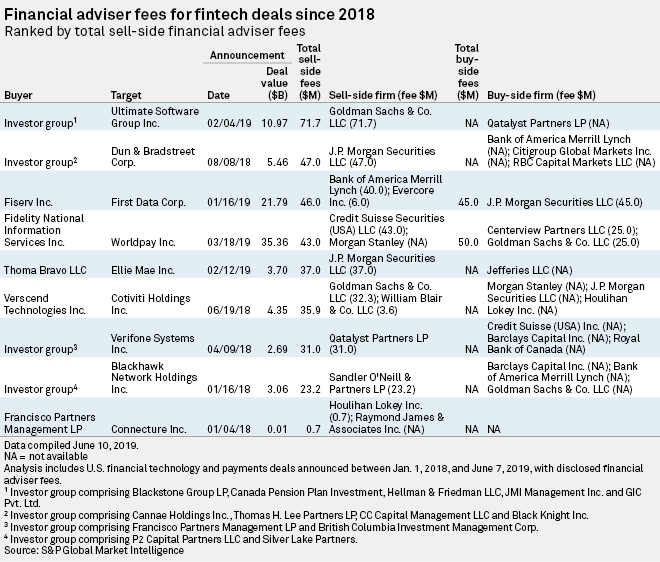 According to the filing, a representative of Hellman & Friedman attempted from time to time to set up a meeting with Scott Scherr, Ultimate Software's founder, chairman, CEO and president, prior to February 2018, but no such meeting occurred. However, in February 2018, a representative of Hellman & Friedman contacted a Goldman Sachs representative who was successful in scheduling an introductory meeting between the investor and Mitch Dauerman, then the CFO of Ultimate Software.

Goldman Sachs also landed spots on two other large fintech deals announced in 2019. The investment bank is one of the advisers to Total System on the Global Payments deal, and it is a buy-side adviser on Fidelity National Information Services Inc.'s $35.36 billion pending deal for Worldpay Inc. On both transactions, the same investment bankers, Jeff Gido and Avinash Mehrotra, were the lead advisers for Goldman.

On the FIS-Worldpay deal, Goldman earned a $5 million fee upon announcement of the transaction. It stands to earn another $20 million when the deal closes, according to a registration statement. Investment banks receiving an announcement fee is more of an exception than the rule in the industry, as financial advisers tend to receive the bulk of their fees upon closing in an effort to align their compensation with a successful deal close.

Based on the fees disclosed in the filing, Goldman was the only financial adviser to receive a fee upon announcement of the FIS-Worldpay deal. However, investment banks often receive fees ahead of deal announcements when they deliver fairness opinions, and Credit Suisse Securities (USA) LLC and Centerview Partners LLC each received a $5 million fee when they delivered fairness opinions on the FIS-Worldpay deal.

The latest Total System assignment is a noteworthy one for Greenhill. The transaction ranks as the announced deal with the largest value in Greenhill's backlog, according to a June 4 research report from JMP Securities LLC analyst Devin Ryan. Greenhill could use the pipeline replenishment, as the company saw revenue drop 41.7% year over year in the first quarter.

Those two investment banks also advised on the pending $21.79 billion sale of First Data Corp. to Fiserv Inc., which should be a lucrative transaction for the financial advisers. J.P. Morgan, the buy-side adviser, is in line to receive a total transaction fee of at least $40 million, and that could expand to $50 million based on Fiserv's discretion.

The discretionary payment allows Fiserv to assess J.P. Morgan's work, and award compensation based on the company's judgment of the quality of services the i-bank provided, according to a registration statement. The majority of J.P. Morgan's financial advisory fee is tied to the deal's closing, and the i-bank received $5 million upon delivery of a fairness opinion. J.P. Morgan may also receive a payment if Fiserv receives a break-up fee or the merger fails to close.

The closing fee would yield a greater payment for J.P. Morgan, and it would give the investment bank one of the highest disclosed financial advisory fees on a fintech deal announced in 2019.