It can take a monster of a movie to pull Walt Disney Co. off the box-office throne, and Warner Bros. is set to unleash a rampage over the weekend of May 31.

AT&T Inc.'s Warner Bros. will bow "Godzilla: King of the Monsters," marking the 35th time Godzilla has graced a feature film, according to Variety. In the new iteration, Godzilla will go up against his three-headed dragon nemesis King Ghidorah as well as a slew of other earth-threatening creatures. 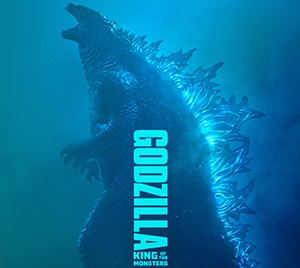 Forecasters do not expect the new monster mash-up to collect as much as 2014's "Godzilla," but it could still turn a profit. BoxOffice.com expects "King of the Monsters" to pull in $56 million in domestic receipts over its debut weekend. Variety and Deadline Hollywood both put out forecast ranges of $50 million to $55 million. Variety notes that the most bullish prognosticators believe the title could stomp to $70 million.

Data from review aggregator Rotten Tomatoes indicated critics favored "Skull Island," which scored a 75% "Certified Fresh" rating, more than "King of the Monsters," which had a middling 41% "rotten" rating as of 2 p.m. ET on May 31. "The Meg" scored a 46% "rotten" rating. Early audiences were more enthusiastic than critics about "King of the Monsters," with 90% of Rotten Tomatoes-confirmed ticket holders rating the Godzilla debut at 3.5 stars or higher as of May 31.

Two other films will open over the May 31 weekend, but both are expected to land behind Disney's live-action "Aladdin" as the reboot heads into its sophomore run. "Aladdin" dazzled audiences with a forecast-walloping $116 million in U.S. box office receipts over the Memorial Day holiday weekend.

For the film's second weekend in U.S. theaters, BoxOffice.com expects Aladdin's genie to conjure up $40 million, versus $35 million for Paramount Pictures debut "Rocketman," a fantasy biopic about Elton John. Estimates for "Rocketman" from Variety and Deadline were more conservative, at $20 million and $25 million, respectively.

Looking at other recent musical biographies, 2018's "Bohemian Rhapsody" and 2015's "Straight Outta Compton" were both high-production hits that outperformed expectations for "Rocketman" from the start. The average opening for a broader list of comparable films compiled by Kagan was more in line at $33.4 million, however. That group had average total revenue of $386.3 million and average net profits of $178.7 million, with 2014's "Get on Up" the only one of the five comparison films that did not end profitably.

Kagan compares "Ma" to psychological thrillers including "Get Out," "Split" and "Don't Breathe." The group fared well on their cinematic course, with an average opening of $27.4 million leading to average total revenue of $180.3 million and average net profits of $57.8 million. 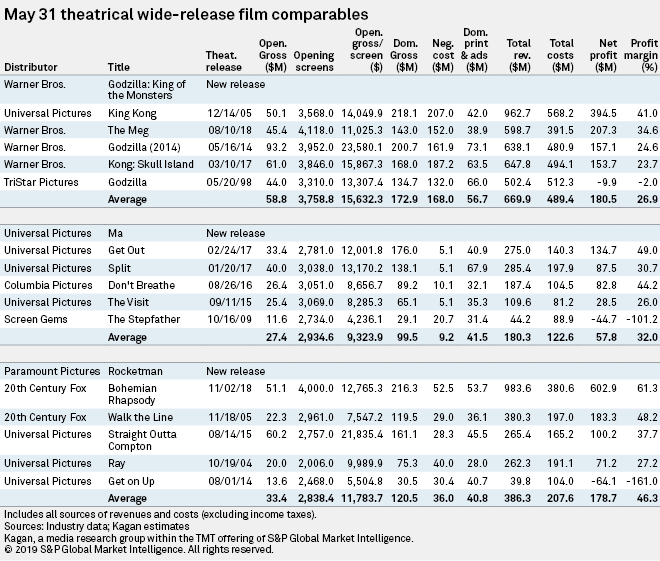