As fiber adoption accelerates globally and consumers increasingly turn to alternative forms of entertainment online, multichannel operators, particularly telcos, are beginning to reconsider their video strategies. Multichannel households have continued to grow globally in 2021 and are expected to reach a total of 1.10 billion by year-end for a weak 0.5% year-over-year increase, as subscriber gains in emerging markets barely make up for accelerated cord cutting in North America, Western Europe and advanced markets in Asia-Pacific. However, a growing number of operators are choosing to shut down traditional services and migrate customers to own- or third-party virtual multichannel or other streaming services. Multichannel penetration of TV households is therefore expected to decline to 58.8% by end-2021 after peaking at 60.6% in 2018, continuing to decline to 56.6% by 2025. 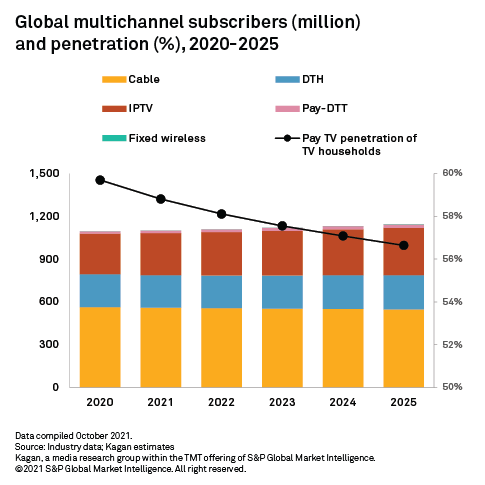 Despite the expected multichannel penetration decline worldwide, the global number of pay TV subscribers will continue to grow in the next five to 10 years, with all regions except North America experiencing growth. We forecast that nearly 1.15 billion homes worldwide will have a pay TV subscription by the end of 2025.

Although cable remains the largest pay TV platform on a global scale, accounting for slightly over half of the total multichannel homes in 2021, its market share and the number of subscribers are expected to continue declining in the next five years, with subscriber losses concentrated in North America, Western Europe and Asia.

In 2020, IPTV overtook DTH to become the second-largest multichannel platform worldwide, with an estimated 284.1 million subscribers at the year's end. IPTV is forecast to grow globally as well as in every region except North America, accounting for 28.9% of global pay TV homes by 2025. The DTH segment, however, is modeled to stagnate on the global scale, declining in the Americas and Western Europe.

Mainland China, India and the U.S. have remained the largest multichannel markets by far, which should collectively claim 56.8% of the global subscriber total by the end of 2021. China and India alone claim just over half of the global market. 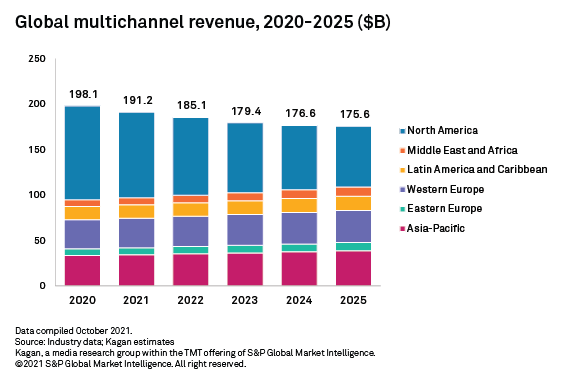