Free trials for streaming subscription services have been mainstays for years, but recent moves by Disney+ and Netflix Inc. suggest the days of the free trial could be numbered in some markets. In June 2020, Disney+ became the first major subscription video-on-demand service to remove all free trials in the U.S. and abroad, while Netflix began to stop offering free trials in most international markets in late 2019 and early 2020. While Disney dropped free trials for Disney+ and ESPN+, it still offers a 30-day free trial for Hulu LLC

The basic premise of free trials is a simple one — giving consumers the risk-free chance to try an SVOD service before committing to a monthly subscription fee — and nearly every SVOD operator in the competitive U.S. market offered a free trial prior to Disney+'s move. Seven-day free trials have become standard in the U.S. although some services have employed 14-day trials. Amazon, Hulu and Netflix offer longer 30-day free trials. 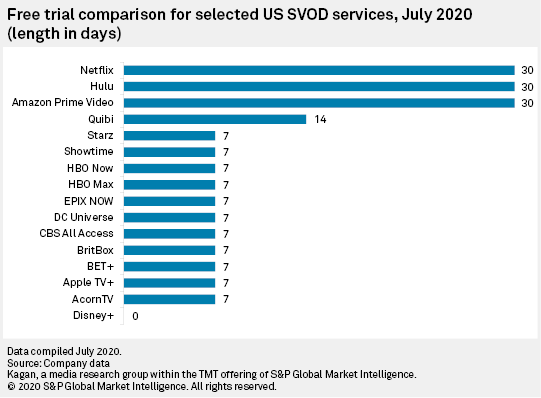 Free trials can be an important way for smaller SVOD services without massive marketing budgets to reach new subs as well as a valuable tool for small and large services alike that may be expanding into international markets where they may not have brand recognition. Netflix reported both paid and free trial subs in the U.S. and internationally for much of 2015-2019, data that highlighted its different strategies by region. Free trials in the U.S. held in the range of approximately 1 million to 2 million free trials per quarter throughout the period — with seasonal spikes each fourth quarter. International free trial totals were far higher, peaking at 7.1 million in the fourth quarter of 2018. 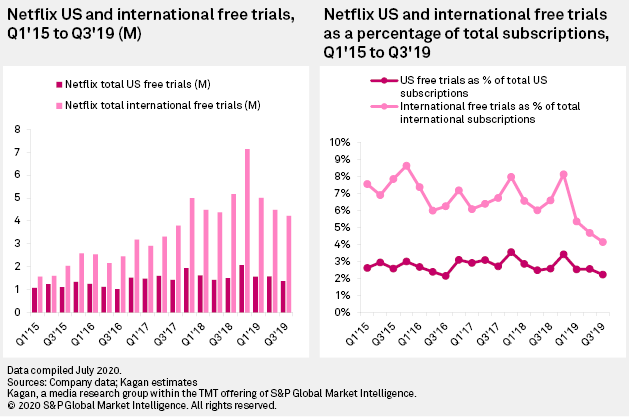 The rapid uptake for Disney+ in the U.S. and abroad could have influenced its own decision to drop the seven-day free trial it originally offered when the service launched. The Walt Disney Co.'s global brand recognition places it in a unique situation versus many SVOD services, and the potential for the release of future blockbuster movies via Disney+ — including "Hamilton" and "Mulan" — may also have influenced its decision. Most major SVOD services have large libraries that cannot be easily binged during a free trial period, but Disney could see revenue for some of its big-budget films impacted if consumers were to use a free trial simply to watch "Hamilton" or other movies.

Data from the Kagan Consumer Insights survey conducted in March 2020 shows that free trial users accounted for a relatively small percentage of respondents who said they were current users of major services, ranging from 1.5% for Netflix up to 12.0% for Disney+. Disney+ also saw the highest percentage of users who responded that they were using a shared login to access the service, with combined free trial users and those sharing logins accounting for about one-quarter of Disney+ users. 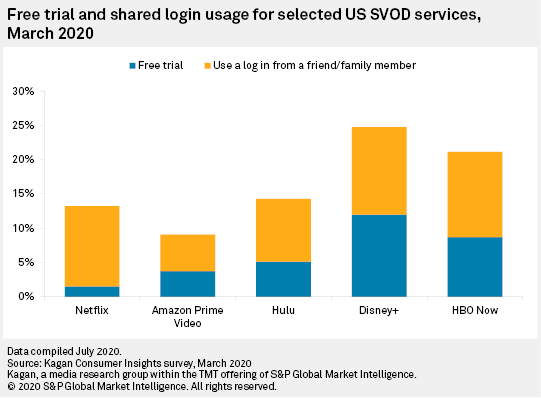 Disney's move aside, it remains unlikely that other major U.S. SVOD services will follow suit and drop free trials, given the hyper-competitive marketplace. Most services knowingly tolerate a certain amount of account sharing and free trial activity, which likely represents a smaller impact via unmonetized viewing, with the obvious upside of free trials potentially converting users to paid subscriptions.

It should also be noted that promotional deals may be influencing trends in free trial usage among U.S. services. Wireless operators including AT&T, T-Mobile and Verizon also offer free access to some SVOD services to select wireless customers. While SVOD service operators are typically financially compensated for these users by the wireless carrier in deals like this, from the consumer perspective, they are accessing the service via a free trial — a fact that could impact consumer survey responses.

Data presented in this article is from Kagan's U.S. Consumer Insights survey conducted in March 2020. The online survey included 2,534 U.S. internet adults matched by age and gender to the U.S. Census. The survey results have a margin of error of +/-1.9 percentage points at the 95% confidence level. Survey data should only be used to identify general market characteristics and directional trends.